We get lots of emails from readers who are frustrated that truck campers weigh too much for the type of truck they prefer to own.  Usually this frustration revolves around matching a half-ton truck with a hard side, non-slide truck camper.  While such a match may seem like a natural, most half ton trucks simply do not offer enough payload to safely carry a wet and loaded hard side, non-slide camper.

Of course there are exceptions to this rule with some late model carefully specified half-ton trucks offering north of 2,000 pounds of payload and some late model hard side, non-slide campers coming in at about the same number, wet and loaded.  As with all truck and camper matching, a little research and simple math will yield a safe truck and camper combination ready to hit the road to fun and adventure.  If you haven’t already, please read our definitive article on this subject, “Matching a Truck and Camper”.

As a manufacturer, Travel Lite offers several non-slide hard side truck campers that fit into the half-ton niche.  For example, the Travel Lite 700STD comes in at 1,935 pounds (wet and loaded with 500 pounds of stuff).  The only catch is the 7000STD doesn’t offer a bathroom.

But the 770 Super Lite isn’t all Dustin had in store for us.  At the end of his interview he drops a surprise announcement, the Travel Lite Black Diamond. 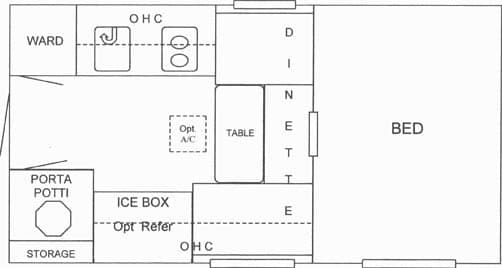 TCM: What sparked the idea to debut the 770 Super Lite?

Dustin: Basically, we wanted to make a new camper at a used camper price.  It’s for those weekend warrior types, who want to get everything they need in a lighter, easier to manage, and less expensive camper.

Some customers come in looking for a camper with less features.  They want something simpler.  That motivated me.  Another motivation came from dealers who asked me for custom changes to remove weight and cost.  I kept seeing a market for that, so we’re going in that direction.  We’re going back to the roots of an entry level camper. 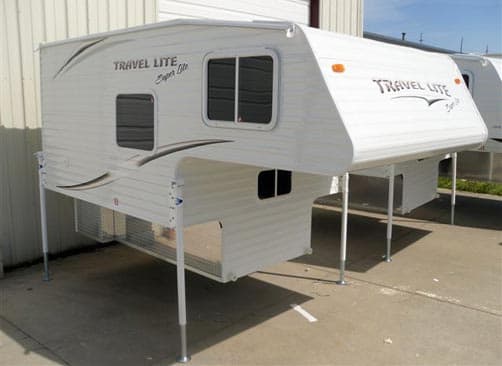 ABOVE: Passenger’s side view with two windows

TCM: Tell us about the development of the 770 Super Lite.  How was it designed, developed, and prototyped?

Dustin: We designed the 770 on paper and then did some adjustments during development.  It turned out amazing.  It’s probably going to be our most popular model when all is said and done.  It’s an entry-level camper that we’ve gotten more orders for than any other camper this year.

We made it six inches narrower than our smallest standard model making it 86” wide.  Then we shrunk it down five inches shorter than our 800 model.  We also went to a one-inch wall, except for the rear wall, which is two inches thick because we want to have a nicer quality door.  We normally have two-inch walls in our half-ton units.  Making the walls one inch thick saved a considerable amount of weight, without sacrificing its structural integrity. 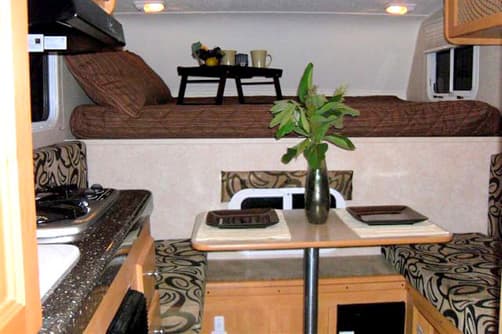 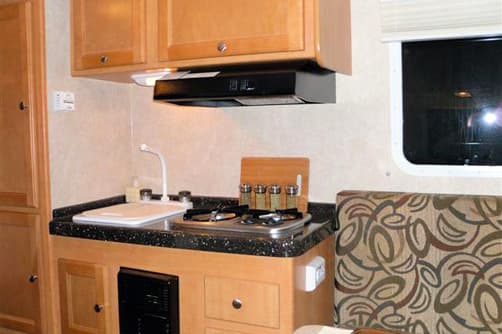 ABOVE: The kitchen with molded Granicote countertop. 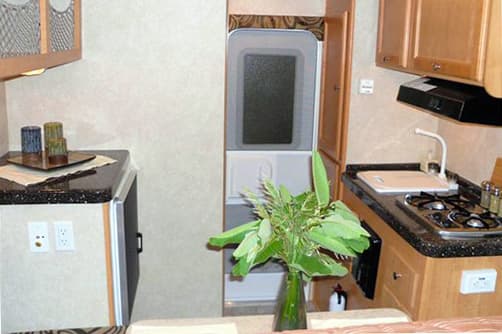 ABOVE: View from the overcab bedroom towards the camper back door.

To further save weight, we eliminated the wall on the front of the bathroom.  Now there is an accordion door that pulls across.  I’m 6’1” and I’m comfortable in the bathroom.  It opens up the unit so much that we are considering using it on other models.

I also wanted to eliminate the black tank.  For the Travel Lite 770 Super Lite, we are using a Porta-Potti in the bathroom.  We put it on a carpeted step on a flat laminated floor, so there is no step up.

Another thing we’ve done, which is sportier, is use netting on some of the overhead cabinetry instead of cabinet doors.  There are three storage compartments above the dinette and one above the refrigerator.  You can put soft stuff up there like clothes and towels.  By eliminating cabinet doors and hinges, we are taking out weight, and giving you a lot of storage. 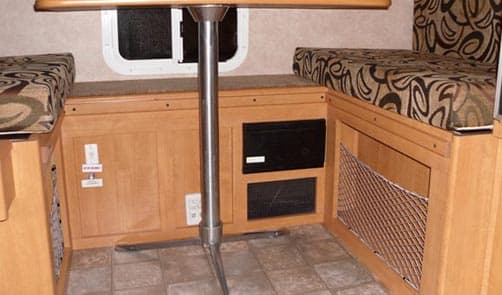 ABOVE: Floor view of dinette featuring an indoor/outdoor table and nylon netting

There’s even netted storage under the dinette that’s tall and usable.  It’s normally an unused spot.

Above the kitchen we have two more cabinets with regular doors for plates and things like that, so we’re giving the customer both types of storage.  There’s also a forty inch tall storage cabinet with three tall deep shelves in the bathroom.

TCM: What trucks is the Travel Lite 770 Super Lite designed for?

Dustin: Honestly, the 770 will truly fit any full size truck, even trucks with five and a half foot beds.  With a short bed, it barely comes past the bumper.  It’s flexible and does not need kits or adjustments to work on short or long beds.  The 770 Super Lite is 7’7” long. 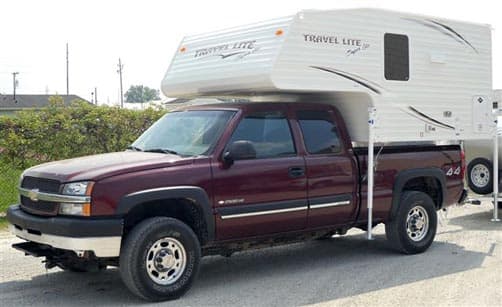 ABOVE: The 770 Super Lite on a short bed Chevy truck


TCM: Explain how you made the 770 work with both short and long bed trucks.

Dustin: One thing that we did with the 770 was eliminate the exterior panel on the rear left side that we have on the 800.  It gets too be too tight and is wider than some people need.  By eliminating that, we got an extra six inches of play, which will make the camper easier to load.

The biggest concern with a long bed or short bed is weight.  The 770 Super Lite is only 1,325 pounds.  There’s a lot of discrepancy between half-ton payloads, so we want to build a camper that’s a size and weight that would fit everything.  The only trucks it does not fit are mid-size trucks like Ford Rangers and Dodge Dakotas because of the floor width, but of course, Travel Lite offers the 690 for those mid-size trucks.

Even if your truck can handle more payload, our 770 allows you can take more with you and not overload the truck.  You can also tow more.  The idea was, “Lets take out the weight and charge less”.  The mission was to sell a product that the customer could buy with a private area and amenities for under $10,000.  Having less weight is a huge bonus.

Dustin: Both.  Cost was important, but weight was the main factor.  The unit itself would be roughly 120 pounds heavier in fiberglass.  Some customers will want fiberglass anyway, and some dealers are already ordering the 770 with fiberglass, but aluminum is standard.

Dustin: No.  We went with the normal windows we use.  We even put a vertical window on the passenger’s side.  It’s tall and gives an open effect in the unit.  The passenger side of the dinette has a nice view.  With the creative use of windows, we shaved thirty pounds in just window weight from the 770. 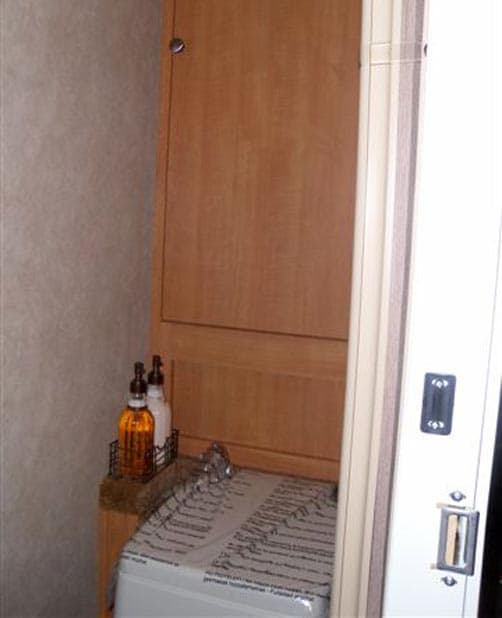 ABOVE: Bathroom with large storage cabinet above the Porta-Potti

TCM: The 770 comes standard with an insulated icebox with an optional refrigerator upgrade.  Is the refrigerator a popular upgrade?  And what does it cost?

Dustin: To build a unit without a refrigerator, I had to let my dealers know the concept behind the 770.  The refrigerator weighs sixty-eight pounds, so we were trying to shave that weight out.  Plus, all the plumbing and gas lines going to the refrigerator have weight, so we’re getting to seventy-five pounds or so.

An icebox weighs eight pounds and it’s very roomy inside.  You can have regular, dry ice, or freezer packs from the store.  There are two racks for cans just in the door.  The icebox is good for someone who doesn’t want a refrigerator, or is nervous about how to use a refrigerator when driving down the road.

So, using the icebox there’s a weight savings of about sixty pounds.  Plus, the refrigerator is one of the most expensive parts of the truck camper.  So far, only about one out of three or four 770s has a refrigerator.  The refrigerator option costs $745.

Dustin: The 770 sits low and sleek on all full-size pickups except the Ford Super Duty which have a taller truck cab.  With the raised floor, the overcab area is increased by an inch and a half so that you are able to clear the truck.

TCM: How similar is the 770 to the lightweight campers Travel Lite has been building for the export market, like the 690?

Dustin: The 690 comes with a refrigerator and the sink and stove are European.  The 690 also has dual pane windows, but no bathroom.  What’s interesting is that the 690 is more expensive than the 770, which is larger and has a bathroom.  Once again we want to bring something new to people who are on a tight budget.

Dustin: The Travel Lite 770 Super Lite is the first camper in a new series of Super Lite campers that we’re already looking to expand.  My dad, Larry Johns, said that we might undercut our other floor plans and I said, “Let the consumer decide”.  Dealers have already given us praise on the 770.  I’ve really fallen in love with how you step into it and you have a bathroom.  Then you get past the wall and you are able to take a full step into a spacious room.  It’s not narrow the whole way through.  It’s really open!

The 770 doesn’t fit into our current line.  It’s even got it’s own decal package with three-dimensional printed graphics.  It’s our first half-ton camper that’s built with an icebox and Porta-Potti.  This is also the first unit that’s really, truly flexible on short and long bed trucks.

TCM: That’s an aggressive price.  When can people expect to see the Travel Lite 770 at Travel Lite dealerships and RV shows?

Dustin: Thirty of our dealerships will have the 770 by July 4th.

Dustin: We’re having the best year we’ve ever had.  We’ve completed more units in the first months of 2011 than ever before.  The 770 model will help us gain even more market share.

TCM: Have you done any hiring recently?

Dustin: We’ve hired two additional sales people and increased production personnel by forty percent.  We came back on January 3rd in 2011 ready to rock and haven’t looked back since.  In 2011, we’ve had our highest production per week since 2004.  There’s no sign of us slowing down.  We’re continuing to sign a lot of new dealers and servicing new accounts.

Dustin: Keep your eyes open for the upcoming Travel Lite Black Diamond!  Our all-new exclusive double-slide model. The interior and exterior look are going to be like nothing the truck camper world has ever seen before.  This unit will be built for the consumer out there who wants the most equipped, best looking truck camper on the market. Period.

TCM: There you go again Dustin, making news.  The Black Diamond project sounds very interesting.  You’ve certainly got our attention.  Keep us in the loop.

Dustin: I certainly will.