When Keith Donkin, General Manager for Northern Lite, contacted us to announce the 2012 Northern Lite 9-6 and 8-11 Sportsman Editions, I was a little confused at first.  What exactly is a Sportsman Edition and what makes these campers, clearly based on exactly the same molds and floor plans as the existing 9-6 and 8-11 Northern Lite models, different enough to warrant the new camper designations?  In fact, I was so confused by this that I didn’t have any other question ready for Keith when we interviewed him about the campers last week.

About half way through our interview, the light bulb finally went on for me.  Northern Lite has experienced tremendous success with their Special Edition series.  The problem with the Special Editions is that they are (a) relatively expensive and (b) loaded with high-end luxury features some people do not need, or want. 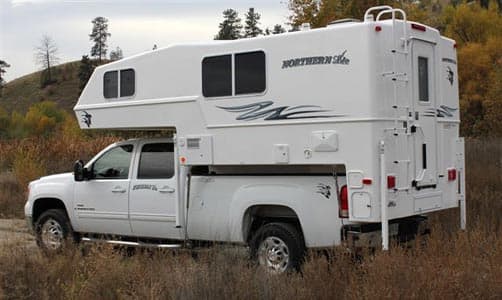 Above: The Northern Lite 9-6 Sportsman on a long bed truck

TCM: What exactly is a Sportsman Edition and what makes these campers, clearly based on exactly the same molds and floor plans as the existing 9-6 and 8-11 Northern Lite models, different enough to warrant the new camper designations?

Keith: The Sportsman Models are based on calls from customers and dealers.  People are looking for used Northern Lites based on a price point.  They want a light weight, two piece molded fiberglass camper, but at a lower price.  The fully loaded Special Editions are out of their range.

The Sportsman models still have the insulation benefits and weight benefits with our two piece molded fiberglass, but have less bells and whistles.  We’re also pricing it under $30,000 at a retail level.

They are going to be in addition to our 9-6 and 8-11 Special Editions, Classics, and Lite campers.  Our regular Classics have the European windows and Heki skylights, among other features.  Before, if someone wanted a basic Northern Lite camper like the new Sportsman Editions, they would have to special order it from our factory.  Now, with the Sportsman Editions, basic Northern Lites can be on dealer lots all the time. 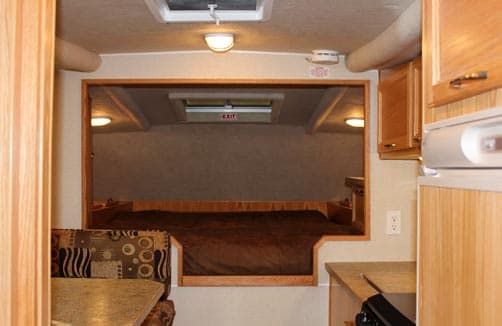 Above: Northern Lite 8-11 Sportsman looking from the back door to the overcab

TCM: What are some of the basic features of the Sportsman Models?

Keith: The Sportsman Models have glass windows, no valences over the windows, Oak instead of Sapele wood, a 5.5 cubic foot three-way refrigerator down from a 6.3 cubic foot refrigerator, mechanical jacks with a pre-wire for electric, and the bumper step is not included.  People can add on five or six scissor steps and the regular bumper can be ordered. 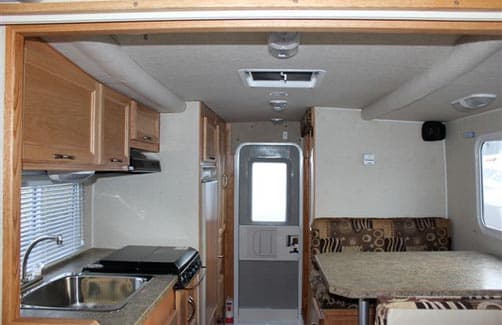 Above: The Northern Lite Sportsman Model taken from the overcab looking to the back door

TCM: Can you send us a list of what exactly comes standard and what the options are for the Sportsman Editions?

Keith: Yes, I’ll send them to you now.

The following is the list of standard features that Keith sent us for the Northern Lite Sportsman Editions:

The following are the available options for the Northern Lite Sportsman Editions: 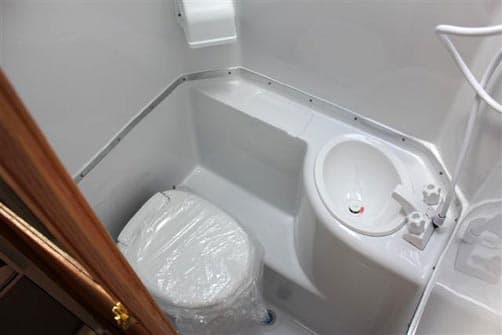 TCM: There are some important features that jumped from the standard list to the available options list.  How did you decide what features to include and what to make optional?

Keith: We’ve found that some people don’t want all those extras.  They are camping and don’t want to have things like stereos and televisions because they are not going to use them.  The new Sportsman Editions are the best compromise possible to satisfy the need for a more basic and lower price point Northern Lite.

TCM: Other than changing the standards and options lists, were there any other compromises made to the Sportsman Editions to hit the lower price point? 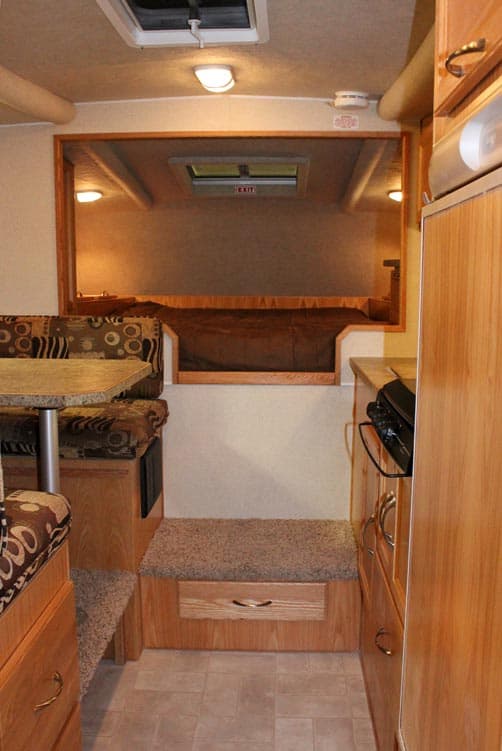 Above: The Northern Lite Sportsman model’s interior, notice the Ozite ceiling, the fabric, and Oak paneling

TCM: How about the interior fabrics and the Ozite ceilings?

Keith: The Sportsman Editions are available with the same fabrics as the Special Editions, the same cabinet hardware, and the same stainless steel sinks.   We’ve also kept the Ozite ceilings and the assist handles in our Sportsman Models.

We’re using the new taller molds as the other 9-6 and 8-11 campers, so these campers also have the additional headroom of three inches in the bathroom and one and a half inches in the gally, and don’t require a lift kit.

The Sportsman Models have full winter packages and the full basement, so fresh, grey, and black tank sizes are the same.  They also have the same battery and propane capacities.  Plus, all of our models come with our six year structural warranty.

TCM: Are there any areas in which you gain space or amenities because it’s a Sportsman Model?

Keith: You actually gain an extra cabinet above the refrigerator because the refrigerator is smaller.  The windows in the Sportsman Editions are sliding glass windows that are slightly larger than the insulated Dometics we use in the Special Editions, and slightly lighter.

The options that you are missing in the Sportsman, that you can add if you wish are awnings, televisions, carpet, electric jacks, Dometic windows, and bumper step.

TCM: Will the Sportsman Models be offered as a 10-2?

Keith: The Northern Lite 10-2 will not be offered as a Sportsman model.  It does not seem to be as much in demand.  Plus, one of our considerations is weight.  People are becoming more and more weight conscious and we’re finding that they are putting these campers on late model three-quarter ton trucks. 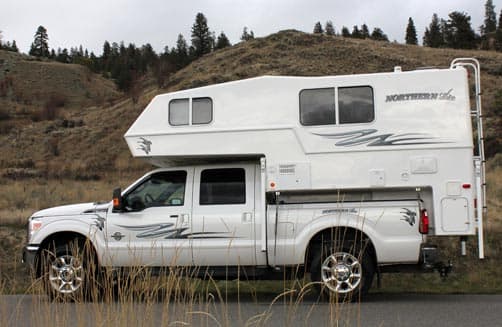 Above: The Northern Lite 8-11 Sportsman is for a short bed truck

TCM: What is the dry weight?

TCM: What is the MSRP for the Sportsman Models?

Keith: This camper is priced under $30,000.  The Sportsman Models and Special Editions are approximately $5,000 different in price, which is about the price of a two year old used Northern Lite.

TCM: When will they be at dealerships for people to see?

Keith: They are there now at O’Connor in Chillwack, Voyager RV in Kelowna, and Fraserway in Edmonton.  We will have one at Louisville that will be going to Webb’s in Bangor, Maine.

TCM: Speaking of Louisville, what are you planning on bringing to the show?

TCM: Is there anything else you’d like to add?

Keith: The Sportsman Models are campers in which you still have all the benefits of Northern Lite’s design with a reduced price and weight.