Question: Do you want a wind generator?

To put those numbers into perspective, 34.45% reported having a solar panel system and 53.78% reported wanting a solar panel system.  Clearly solar is a more established technology, but the truck camper industry and dealer base should take note of the growing consumer demand for wind generators.  From our survey, wind generators are looking more and more like a real opportunity.

So why have only 1.27% already taken the wind survey plunge?  When we talk to fellow truck camper owners about wind generators, the general consensus is, “We’re interested, but waiting for the technology to prove itself”.  In other words, that 46.41% of our readership is interested in a wind generator, but wants someone else to go first. 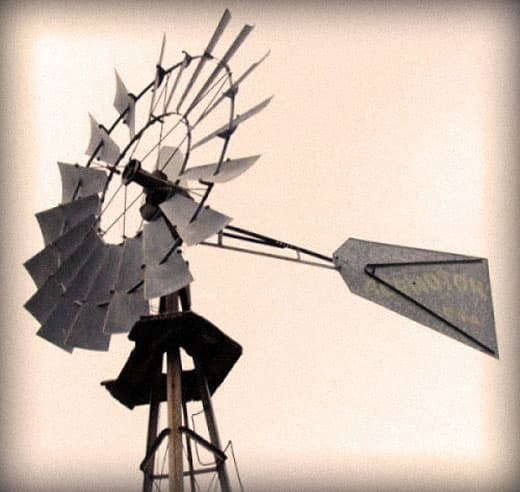 Above: Windmills have been generating power and pumping water for over 100 years.

This is totally ironic as, compared to wind power, solar panels are the upstart technology.  According to the U.S. Department of Energy, wind power in the form of windmills started in the 11th century.  And we all know the classic windmills (see above) from the early 20th century that were used to pump water and generate electricity.  Wind turbines, or windmills designed to generate electricity, technically stated in Denmark around 1890.  That’s right, windmills for electricity generation were a proven technology well over 100 years ago.  Solar panels?  They’re the young whipper snappers!

Taking a step back, we understand the hesitation to jump onboard with wind generators.  Until recently, we had never even seen a wind generator mounted on a truck camper.  Early adopters might enjoy being the first kids on the block with a new product, but most of us like to see something we’re going to spend hard earned money on in person.  For us, that hinderance was solved when we finally met Jack and Crystal Wright, Co-Owners of Free Spirit Energy, at the Overland Expo 2013 this past May. 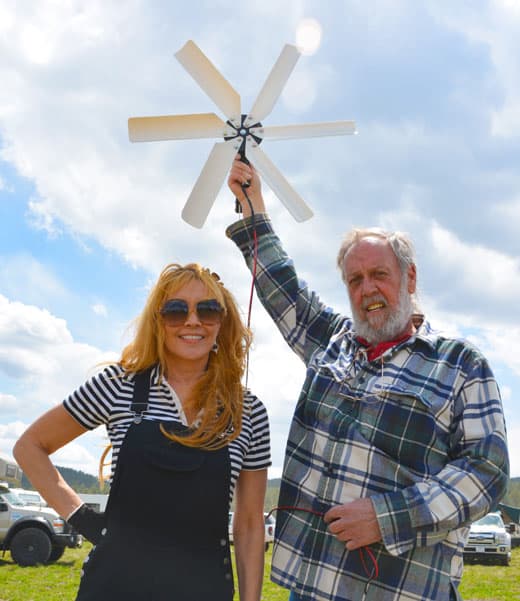 Above: Jack and Crystal Wright of Free Spirit Energy at Overland Expo 2013.

Since this was the first time we had seen a Windwalker wind generator, Jack and Crystal took the time to show us each component of the wind generator system, piece by piece. 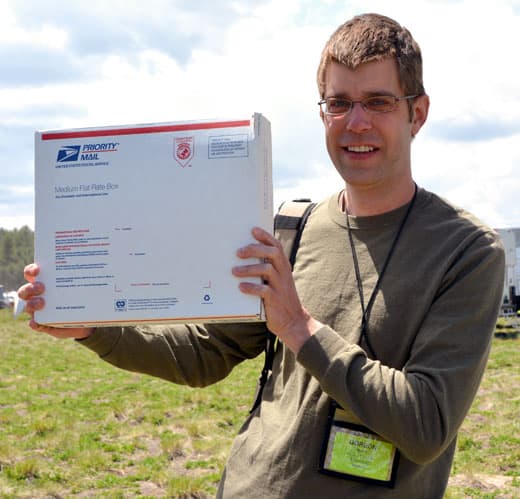 Above: Windwalker wind generator kits arrive via Priority Mail.  And I needed a haircut.

Crystal started by showing us the box the Windwalker kit comes in.  It’s literally a USPS Priority Mail box with carefully bubble wrapped components inside. 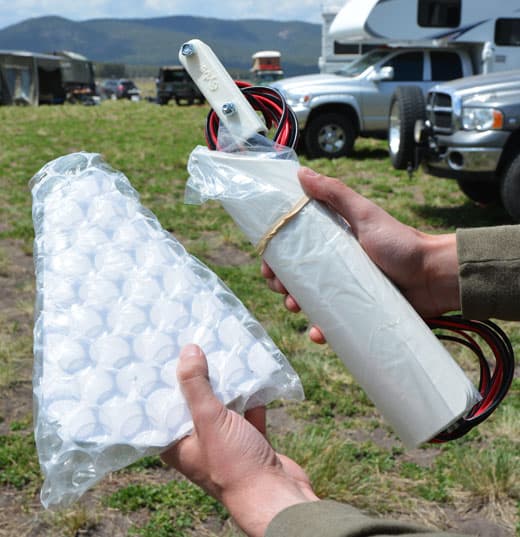 Above: The tail fin, tail fin boon, blades, and wiring. 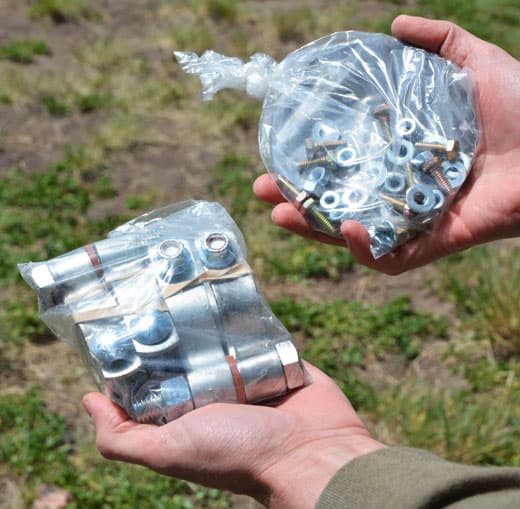 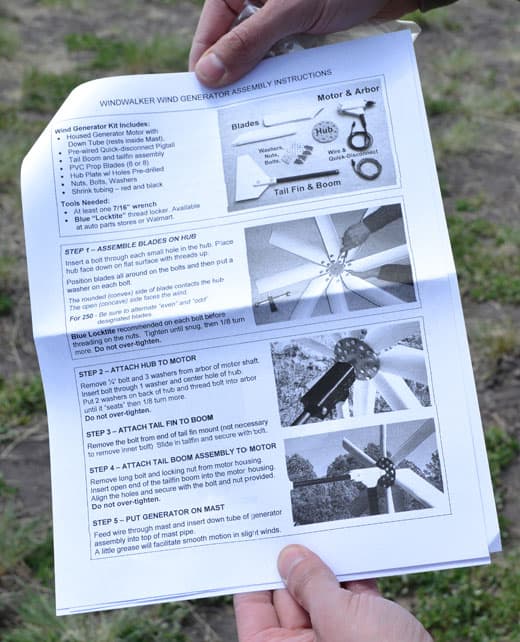 Above: Jack and Crystal have assembled a clear set of instructions with photography.

From the Priority Mail box to the clear instructions, I appreciated the no-nonsense approach to a no-nonsense product.  No-nonsense means no unnecessary added cost.  A custom Windwalker product box would be nice, but it would add cost.  No thanks. 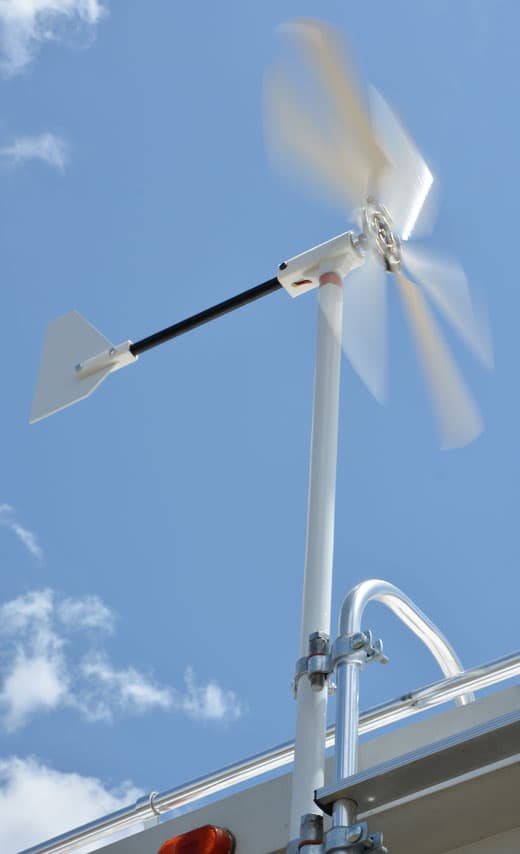 Above: A Windwalker mounted in a ladder mount bracket.

When we were done exploring the kit, Jack took us through the assembly and installation of the Windwalker wind generator.  He started by showing us the two mounting solutions that he and Crystal developed to attach a wind generator to a truck camper; a ladder mount bracket, and a horizontal mounting plate.  Naturally he had both brackets on his truck camper.

In person, the horizontal mounting plate made more sense as the stiff wind at the Overland Expo field had the Windwalkers really going.  When the wind generator fans are turning in even moderate winds they could potentially be dangerous if you get too close.  Imagine getting too close to a running open room fan and you get the idea.  None of us are afraid of room fans, but we certainly aren’t about to stick our fingers or face near one.  I remember a guy in college who stopped one with his tongue, but he was an idiot.

According to Jack, the ladder mount is the more popular mounting bracket.  Almost every hard side truck camper has a roof access ladder making this mounting position more available, and accessible, for most truck camper owners.  The installation of the ladder bracket is simple and installing and uninstalling the Windwalker from the ladder is more convenient than the roof mounted horizontal mounting plate.

We observed Jack and Crystal installing and uninstalling the Windwalker in the ladder bracket a few times during our conversation.  Again, the winds at the Overland Expo really had the Windwalkers turning and I was amazed that they were able to safely approach and handle the Windwalkers as the blades turned at speed.

When I asked Jack about this, he demonstrated how the Windwalker will quickly come to a complete stop if it’s turned away from the direction of the wind.  It was actually quite interesting to see the generator fans turning at speed facing into the wind, and then almost immediately stop when Jack turned the fans sideways and out of the wind.  When installing or uninstalling the Windwalker, the trick is to turn the Windwalker sideways to the wind and gently hold the fan blades steady.

Due to our aggressive Overland Expo schedule we didn’t have the time to actually assemble the Windwalker ourselves, but Jack and Crystal did take us through the steps.  The kit comes almost completely assembled with most of the assembly consisting of bolting the eight PVC plastic blades to the hub with a 7/16” wrench.  Jack assured us that this takes no more than a half hour.

The rest of the Windwalker kit consists of the housing, motor arbor, tail fin, and quick disconnect wiring.  There are no, “What could that be” parts in the kit.  It’s very clear as to what piece goes where.  For example, the tail fin looks like a tail fin.  The instructions are visual and explicit and the kit components are CNC machined for precise fit.  Jack and Crystal have done everything they can think of to make the assembly quick and easy.  If you can build a set of turnbuckles, you can handle this.

The only needed component that’s not included in the Windwalker kit is the mast, a 7/8” diameter steel pipe readily available at your local hardware store.  Jack explained that the size and weight of the steel pipe would be prohibitive for shipping.  If he included the steel pipe, the kit’s cost and shipping fee would increase dramatically.  With the availability of 7/8” diameter steel pipe, Jack decided to save you money and give you the option to choose what length pipe you need.  More evidence of Free Spirit Energy’s no-nonsense approach.

Above: Jack connected a digital multimeter directly to a Windwalker wind generator to demonstrate how the voltage changes in rising and falling wind speeds.

With the mounting and assembly explained, Jack took down a Windwalker and attached the output wires directly to the +/- probes of his digital multimeter.  As the wind speed changed, his meter went from 12.60 to 13.62 to 18.89 volts over a thirty second period of time. 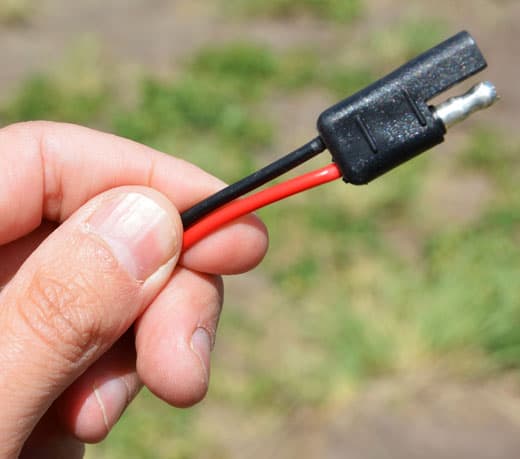 Above: The quick-disconnect wire that connects the Windwalker wind generator to your battery bank.

Jack then showed us how the two-way quick-disconnect wire allowed the Windwalker owner to connect and disconnect the system in seconds.

We were very impressed with the Windwalker, not to mention Jack and Crystal’s approach to the technology.  They have made wind generators for truck campers as accessible and simple as possible.

The only two drawbacks that we can see are the need to set-up and take down the turbine when you arrive and depart, and the fact that the wind doesn’t always blow.  The first drawback is alleviated somewhat by the relatively quick and painless process of installing and uninstalling the turbine.  It literally takes a minute or two.  The second drawback has more to do with where you boondock, and what the weather conditions tend to be in that location.

During our recent ten-week truck camping excursion, we had many more windy days than sunny days.  In fact, the wind was almost a constant.  If wind is a concern, start paying attention to the weather when you’re camping.  Is it sunny?  Is it windy?  As I write this article, it’s completely overcast outside, but the trees are rustling in the wind.  Those kinds of observations where you camp might help to make your decision.

The ideal would be to have 100-watts of solar panels (or more) and a wind generator.  With these two power sources, combined with all LED lighting, I cannot imagine needing a gas or propane generator unless air conditioning and/or the microwave was needed.  With all-LED lighting now available in most truck campers, our days of needing a built-in or portable generator are over.  We didn’t have a generator for the past ten weeks, and didn’t miss one either.

We want to thank Jack and Crystal Wright of Free Spirit Energy for coming out the Overland Expo 2013.  We really enjoyed meeting them and experiencing their Windwalker products.  Based on what we saw, we have no doubt that there will be more and more wind generators spinning above truck campers in the near future.  This back to the future technology seems tailor made for boondocking.  It’s a breeze.