Torklift International debuts a product to stabilize a camper off the truck.  As the saying goes, if the camper’s a rockin’, get a WobbL-Stoppr!  Don’t be swayed.  Stop the rock!

The long answer is that most modern hard sided truck campers are designed to be used on or off the truck.  That doesn’t mean put the camper all the way up on it’s jacks and pile your local Little League team into the cabover.  What it does mean is that you can take the camper off the truck on relatively level ground, lower the jacks until the camper is a foot or two above the ground, level the camper, and then use the camper.  You can sleep in the cabover, you can make breakfast, you can even use the bathroom.  Yes, it can be done.

“But what about pop-up truck campers?” you ask.  Well, there it gets a little more complicated.  Not every pop-up camper is designed to be used off the truck.  Most of the larger pop-up campers are, but I would talk to your dealer or manufacturer before making any assumptions.

To the rescue comes Torklift International with the reintroduction of their newly redesigned and updated Wobbl-Stoppr.  To find out more about the Wobbl-Stoppr, we talked to Jack Kay, Principal of Torklift International, Jay Taylor, Torklift’s General Manager, and Candice Boutilier, Torklift’s new Marketing Director.  Oh, and Torklift has moved!  This is one news packed Torklift story you don’t want to miss.

TCM: The WobbL-Stoppr is a product Torklift initially debuted years ago.  What’s the history of that product and what made Torklift decide to bring it back into production?

Jack: That’s kind of an interesting story.  Back in 2000, an inventor/engineer in the aircraft industry approached us with an early version of the product.  He and his wife were avid truck campers but his wife was very sensitive to the motion of the camper when off the truck.  He analyzed the cause of the motion and came up with two or three product designs to address it.  When he perfected the best solution, he called it the WobbL-Stoppr and applied for a patent.  Then he approached us to be an exclusive distributor of the product.

We immediately recognized the concept and saw how friendly the WobbL-Stoppr is to install and use.  We also saw how the WobbL-Stoppr protects the integrity of the camper frame and jacks while increasing safety because it prevents the camper from tipping and swaying.  At that time we went into the distribution of the product.  Along the way there were concerns about the price of the product and we experienced some warranty issues related to the plastic knobs.  This was all part of a learning process for us as we had never worked with an outside designer and an independent manufacturer.

Jay: From there we took the original WobbL-Stoppr to the Torklift research and development team.  They made improvements to the design, materials, and manufacturing of the product.  It’s now a significantly better product and worthy of our lifetime warranty.  We also were able to bring the retail price point down. 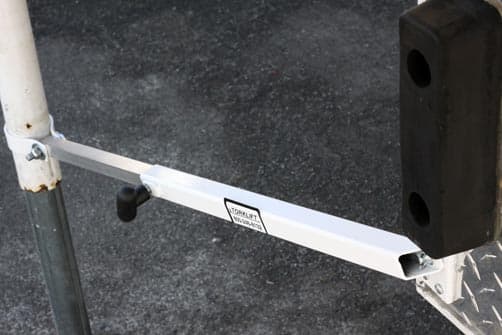 TCM: It sounds like it could have been called WobbL-Stoppr 2.  Can you tell us more detail about the changes in design, materials, and manufacturing?

Jack: We changed from steel to aircraft grade aluminum to lighten the product.  We also changed the knob design and modified the mounting points to add strength and durability.  The manufacturing process was streamlined with new jigs and our motion reduction strategy you wrote about for your Torklift factory tour last September.

Jay: The WobbL-Stoppr is now lighter in weight and lower in cost.  The WobbL-Stoppr now retails to the consumer at less than 50% of the cost from two years ago.  We are very proud of our Research and Development department.

TCM: Are there any limitations to the WobbL-Stoppr system, or should it work with any truck camper that uses corner jacks?

Jack: WobbL-Stopprs are sold in pairs and are designed to work with square and round jack mounts.  The initial pair is designed to go on the front of the camper face and run down to the jack leg that is affixed to the camper body.

TCM: Is there a camper weight limit?

TCM: Does the WobbL-Stoppr system work with all types of jacks; manual, electric, and hydraulic?

Jack: There is no limitation for jack design or camper weight.  It is a simple installation and an easy concept for people to grasp.  WobbL-Stopprs work.

TCM: How do you install the WobbL-Stoppr?

Here is the install process step-by-step: 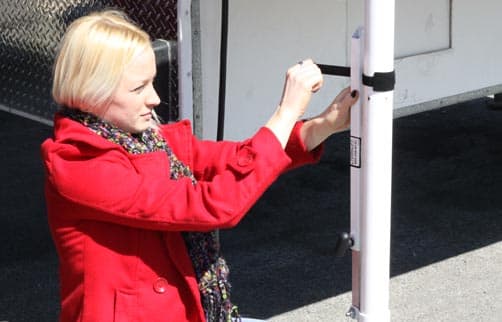 Step One: Unfasten the the WobbL-Stoppr from the jack leg. 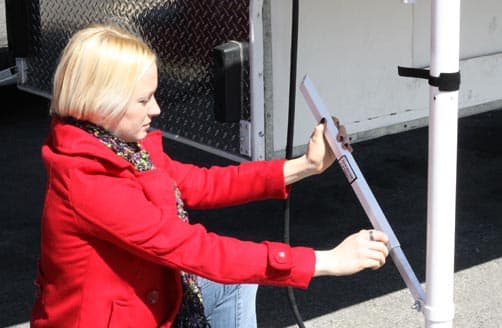 Step Two: Engage the arm by removing it from the jack leg toward the camper frame. 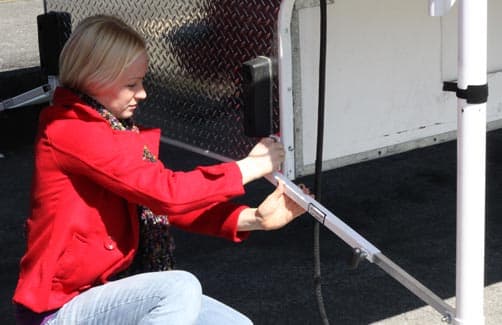 Step Three: Secure the arm with a pin to the bracket that is attached to the frame. 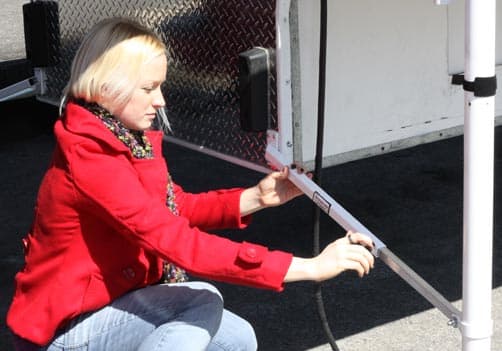 Step Four: Adjust the tension between the jack leg and the frame with the knob to prevent sway and tipping. 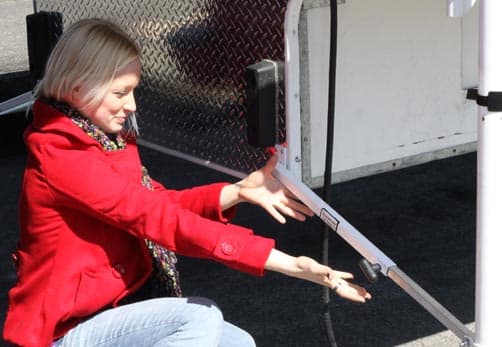 Step Five: Yay, you are done!

TCM: Do you supply sealant for the screws with the kit?

Jack: Yes.  The lower attachment point is a clamp that goes around the jack leg.  There’s a swivel that allows it come up to a vertical position.  The WobbL-Stoppr just hinges down.  There’s one clip on the front of the mount.  Tighten the assembly and you’re done.  It only takes a few seconds.

It’s the customer’s personal preference if they want to install it themselves.  Obviously we have great dealers who are more than capable of doing this for the end users.

ABOVE: These pictures show General Manager, Jay Taylor showing Candice Boutilier, Director of Marketing, how to install the WobbL-Stoppr.  Once the bracket was attached to the camper frame, the entire process took about thirty seconds.  Candice said, “It was very simple to learn”.

TCM: How about the maintenance for the WobbL-Stoppr.  Does the WobbL-Stoppr need to be lubricated?  And should owners remove them before storing a camper for the winter?

Jack: The WobbL-Stoppr system is designed to be stored in place.  It does not need to be removed once installed.

Just like any powder coated steel product, including the legs of the camper jacks, the WobbL-Stoppr powder coated arms need to be maintained.  If the power coat gets scratched down to metal, it should be touched up to protect the seal.  Also, the locking knob that locks the arms could get lubricated at the beginning of each camping season.

TCM: What does the WobbL-Stoppr cost?

TCM: Is there anything we didn’t ask about the WobbL-Stoppr that you would like to add to the interview?

Jack: If you take your camper off the truck at any point and want to feel like you are on solid ground, the WobbL-Stoppr absolutely makes that happen.

Jay: If you have your camper off your truck, think about the stress on the jacks.  From a safety standpoint, our product eliminates the wobble and extends the life of your jacks and the camper frame especially where the jacks are mounted.

Jay: Torklift has been on a fast track for growth over the past two and a half years.  It became necessary to expand and increase production and to give employees a better working environment.  We also needed more space for Research and Development to do their work without interfering with production.

In December, 2010, we found a facility in Sumner, Washington that perfectly matched our need.  We moved over the Christmas holiday.  Almost everyone in our production and management staff gave of their own holiday time to get the facility moved.  We resumed full production on January 3rd.  That’s a huge compliment to the Torklift International team.

TCM: What made the new facility (seen above left) a perfect match?

Jay: It’s an additional 50,000 square feet and it’s only ten miles down the road.  Right now, customer service, finished goods, and shipping and receiving are in the new building.  Production will go into the new facility in October.  We have had success with our products in 2010 and we’re looking forward in 2011.  We also had some changes in our marketing department this year.

TCM: Last month, Jessica May, Torklift International’s Marketing Director, informed us that she was being deployed with the United States Marine Corps.

Jay: In mid-January, Jessie received orders for fourteen months of deployment in Afghanistan.  She’s a Cargo Loading Specialist for the United States Marine Corps.  Jessie was also deployed last year for two months in Africa.  Now her whole unit is going on rotation into Afghanistan.  They had thirty days to prepare.

Speaking on behalf of the Torklift International family, we will be thinking of Jessie during her service overseas and look forward to her safe return.

Before she left, Jessie was completing the Torklift International marketing plan for 2011.  She was also training Candice Boutilier to take over her marketing responsibilities.  Candice is going to take Torklift’s marketing forward and will work with Jessie when she returns.  Having Jessie and Candice working together will be a great benefit for Torklift.

TCM: The next question is for Candice.  Tell us how you came to work for Torklift.

Candice: Before coming on board with Torklift, I graduated from Washington State University with a degree in Mass Communications with an emphasis in Journalism. Afterward, I worked with the Columbia Herald in Moses Lake for four years as their city reporter, assistant editor and photographer.  During those four years with the Herald, I was cross-trained in advertising and marketing.  That was the direction I wanted to go in for my career, so I quit my job at the newspaper and came to work for Torklift.

Torklift is a strong company and I see how fast they are growing.  This is where I want to be.

TCM: Congratulations on your new position.  Have you ever been truck camping?

Candice: Not yet, but it’s a mandatory requirement for all Torklift employees to take the company truck and camper and go camping at least once a year.  I’m really looking forward to that experience.  I’m very excited!

Jack: Once the nice weather comes out, there tends to be a waiting list for the camper.  That’s definitely something that Candice will do.

TCM: We know that Torklift is a big believer in cross-training.  Tell us about your training so far at Torklift.  Have they had you installing Torklift turnbuckles and tie-downs yet?

TCM: Thank you Jack, Jay, and Candice.  We’ll keep our thoughts with Jessica until she’s home safe from serving our country in Afghanistan.  Thanks for the interview.