If Emeril Lagasse worked at Palomino RV, he might have designed the new Max series.  Imagine the Palomino management team gathered around a conference table with Emeril.  Emeril says, “Let’s take the Bronco and Maverick, and kick it up a notch”.  Gene Cronin, Palomino’s National Sales Manager, nods in admiration of Emeril’s creative genius as Emeril points to a few of his favorite new camper ingredients.

Picking up a European Dometic window Emeril shouts, “Bam!” sending Gene and his engineers under the table.  Then Emeril tosses in some freshly sawed aluminum and says, “Feel the love”.  With a pinch of composites and glue he exclaims, “Aw, yeah, babe”.  While Gene and the Palomino team quickly knock down Emeril’s idea for the first Cajun Camper, they love his recipe and plan to serve it up fresh at Louisville.

Okay, so maybe none of that actually happened.  And Gene completely denies hiding under the table.  But the Max series is real, and they really did kick it up a notch.  To explain exactly what got kicked up and what notch they reached, we talked to Gene Cronin. 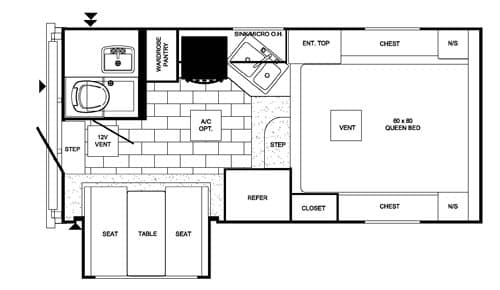 ABOVE: The floor plan for the 2011 Palomino Maverick Max

ABOVE: The floor plan for the 2011 Palomino Bronco Max

The following is an interview with Gene Cronin, National Sales Manager for Palomino RV, about the 2011 Palomino Maverick Max and Bronco Max truck campers.

TCM: How did the Palomino Max series come to be?

Gene: Basically the Max series came from our dealers and customers asking us to build a slightly larger unit with more features.  Our dealers didn’t want to have to carry another brand to meet that segment of the market and our customers loved their Broncos and Mavericks and wanted to stick with a Palomino.  Our goal was to grow into models that offered high end standards, but do so without straying from our philosophy of great value.

The campers in the Max series are truck campers that have bigger holding tanks and more features than our current Broncos and Mavericks.

The Max series is a result of our dealers and customers asking for extended dry camping capabilities and more current features, like the European Dometic windows and upgraded electronics and entertainment, which are things we aren’t doing in our current line.

TCM: Tell us about the design and development of the Max series.  What were the design criteria going into the projects?

Gene: The Bronco Max has gone through the most design in the last four years.  There have been a slew of prototypes.  With the Bronco Max we went from a fully wood to fully aluminum framed camper.  We also put in an extended cabover bed.

There was a lot of testing on Bronco Max series that didn’t have to be done on Maverick Max because we already knew about Maverick construction, plus going from wood to aluminum and extending the cabover created new design issues such as new lift system sizes, new roof sizes, and new side wall sizes.  We also showcased our fifth generation one piece door.  So as you can see, there was a little engineering that needed to be worked out and tested.

Gene: The lift is same type of system, but different from our regular Broncos.  The gauge and size of it and the way it works to average person isn’t really different.  If you look at it, it wouldn’t look different.  It’s just a beefier lift system because it has to lift a larger roof and the sidewall height is larger than a regular Bronco.

With the Bronco Max we learned some things in assembling the frame and putting in extra supports.  If you were to walk in the first one in comparison to the ones going down the line now, you wouldn’t notice a difference.

At Palomino we do a series of tests on the structure.  We completed some weight bearing tests and some truck tests.  We put a couple thousand miles on the campers to see if there are any stress fractures and road related stress issues that may arise.  We also put the campers through cold and heat chamber testing.  We learn the most from the road test as the camper stays on a truck six to eight months. 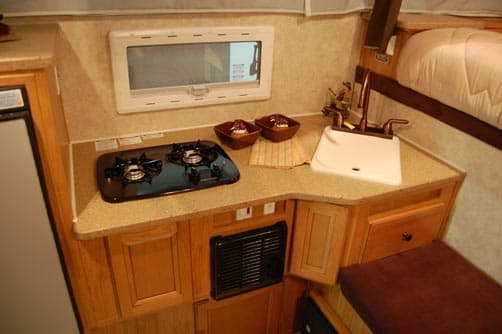 Above: The Bronco Max kitchen area

TCM: Tell us about this cold and heat chamber testing.

Gene: Dometic has a cold and heat chamber in their facility.  We can take it from 115 degrees to -20 degrees.  This helps us make sure that we’ve got adequate heating and cooling  systems in our campers.  At -15 degrees we turn on the furnace and make sure there are enough heat ducts and a large enough furnace.  We then perform the same tests on the cooling side to make sure that we are using adequate air conditioning units to cool the camper.  There are number of monitoring devices set up throughout the unit during the tests.  This allows our engineers to walk away with very detailed data.

We also want to make sure of the bonds within the lamination process, with the substrates we are using, and what we laminate fiberglass to are good and strong.  The rapid temperature changes are very valuable and provide us with good data in a relatively short amount of time.  It takes about three days in the environment chamber to perform all of the tests.

Whenever we build a new floor plan or model they go through similar testing.  The Max has gone through more than normal.  We have been building Bronco truck campers since the early 1970s and basically know how a new Bronco floor plan will perform.  The Max was a little different because there is much more interior space.

Every year we test some of our units at a testing facility in Elkhart to make sure our vendors haven’t changed anything in their build process.  We also do extensive testing on our lamination and on the substrates we laminate together.  Substrate materials are what we use to build a laminated unit and it includes fiberglass, aluminum, luan, foam, and glue.  Lamination is like making a sandwich.  We have a layer of a fiberglass, then luan which is what we laminate to, then foam which is our third substrate, and luan on the inside all with glue applied between each layer.  So, your substrates are your materials being glued together.

TCM: Palomino cancelled it’s Winter Creek series of campers in 2010.  That signaled a departure from the high-end of the camper market.  Why are you refocusing on a higher end camper with the Max series after your disappointment with the Winter Creek line?

Gene: The Winter Creek Series definitely wasn’t a disappointment and we learned a tremendous amount about building large campers.  We decided to go back and approach the market in a different manner.  With Winter Creek we jumped right in to 11’6’’ campers and full wall slides.  With the Max Series you will see floor plans start in the 9’ size and we will work our way up to larger floor plans.  There is currently a 10’  and an 11’ floor plan in the works.  We will get up to the 11’ and 12’ floor plans, but we feel this path of growth is correct for us, our dealers, and our customers.

In the next couple of months, there will be more floor plans with the Max series.  We always like to build prototypes for Louisville and get the dealers’ feedback.  So, at Louisville we showed a few new things that may or may not go into production.  We use the trade show to see what the dealer response is like.  We have made changes to the Bronco Max because of dealer feedback.  The first couple models of the Maverick Max are out to dealers and the Bronco Max will be out in the next couple weeks.  It’s growing and gaining traction in the market.  It’s very exciting!

TCM: Were there changes to the production of the Palomino Max campers, or are they essentially made the same way the other Bronco and Maverick campers are made?

Gene: The Bronco Max is going from wood to aluminum frame.  It will have a complete laminated floor instead of structure wood floor.  In 2011 that will go into the Bronco series as well.

TCM: Why are you going to aluminum framing with your Bronco Max?

Gene: It was for strength and it was for customer value.  On the Maverick Max it’s wood stuffed with aluminum.  The wall thickness is different.  The production version of the Bronco Max has a basement because the dealers wanted larger holding tank capacities.  The Max’s have similar options to our current series, so when the customer is shopping they basically can add the options they want.  There are things that are standard on the Max series like the bumpers and the insulated tents so there are some distinct advantages to stepping up.

TCM: Why did you choose to use European Dometic acrylic windows for the Max series?

Gene: It’s a neat window design and it’s thermal pane.  In inclement weather you can keep that window open unless it’s raining side ways to keep air flow in your camper.  It comes complete with a shade and a screen.  What better upgrade is there than that to put into our Max campers?

TCM: Are there other RV products that use the Dometic windows or are you buying those especially for the Max series?  Doesn’t that compromise your volume order advantage?

Gene: Not really, as we buy those windows for other Forest River products and our overall volume with Dometic is huge.  It’s a product we felt would enhance the value in our campers.  If we want to spend more money on an added feature we can without greatly effecting cost because we can buy at better prices because of our overall volume.

TCM: What is the dry weight of the Bronco Max?  And the MSRP?

Gene: 1,600 pounds.  It weighs what it weighs given the design.  We are not trying to hit compact or half ton trucks with this product.  We are recommending three quarter tons for our Bronco Max campers.  The MSRP is $14,471.

TCM: What is the dry weight of the Maverick Max?  And the MSRP?

Gene: The dry weight of the Maverick Max is 2,930 pounds. 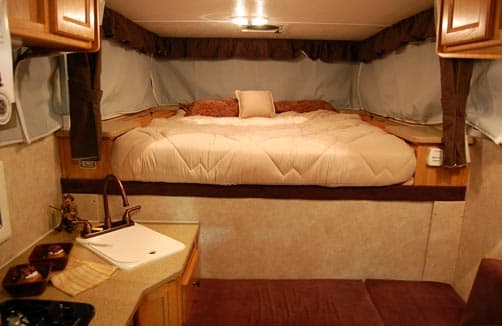 TCM: Where can people come see the new Max campers?

Gene: We will have a Maverick Max in Springfield, Massachusetts at the Big E on the 18th of this month.  The new 1225 Bronco prototype will also be at the show, which will be the first show the 1225 attends.  Also, at Springfield will be our Maverick 800 and Maverick 8801.

TCM: Will there be more Palomino Max campers in 2011?

Gene: There will be more floor plans; probably two more in the Bronco Max and two or three Maverick Max floor plans. The Mavericks will all be slide-out campers and possibly one non-slide front bath unit.

TCM: How are things going at Palomino?

Gene: Very good.  We’re projecting a record year.  This past year we had one of the best fall seasons we have ever had, which means a good spring.  We’ve hired thirty to forty new people in the last ninety days.

TCM: Is there anything we didn’t ask you that you would like to add to your interview?

Gene: We’ve got all kinds of things under development right now.  There will be many exciting things at Palomino in the near future that we look forward to introducing through TCM!