Consumers usually learn about a new car or truck from a television commercial, or by seeing one drive past them on the road.  “That car looks different.  What is it?”

Enthusiasts usually learn about a new car or truck from a car magazine or website.  Perhaps they got scooped by a factory spy photograph.  Maybe the company leaked some preliminary designs.  Then the enthusiasts get an eye full of the new car or truck from a media reveal, or a major car show.  Within minutes, photographs and specifications flood the internet, and the public buzz or beat down of a new automobile begins.

Then there are the true insiders; people who work inside the automotive and automotive aftermarket industries.  These folks sign non-disclosure agreements, arrive at secret locations, and get direct access to cars and trucks us mere mortals have never seen.

Ben Knaus, Director of Engineering for Hellwig Products, contacted us with information about their new line of products for the 2015 Ford F150 and the 2016 Toyota Tacoma.  He had seen the trucks, measured the trucks, and, in the case of the aluminum-bodied F150, tested its mettle.  Naturally we called him for a more information.

We also talked with Mike Hallmark, West Coast Sales Manager for Hellwig Products, on his recent experience at Overland Expo West.  From that experience, he shares some photography that you have to see to believe. 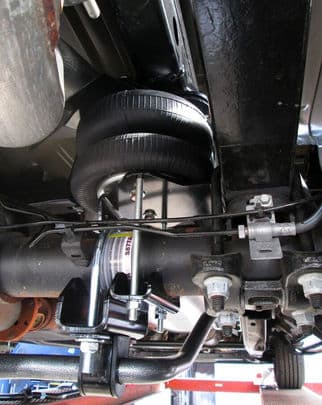 Above: Hellwig’s air suspension system installed on a 2015 Ford F150

TCM: Ben, you’re now Hellwig Products Director of Engineering.  Please tell us a little about your background and how you came to work for Hellwig.

Ben: I graduated from Cal Poly, San Luis Obispo with a degree in Mechanical Engineering.  I started working for Hellwig over four years ago as an R&D Engineer designing new products.

I’ve always been a gear head and really grew to love suspension design when working on my 1985 Toyota Pickup rock crawler through college.  I always knew I wanted to work in the automotive industry and really lucked out getting the position with Hellwig doing exactly what I hoped to do.  I am now the Director of Engineering, overseeing research and development, production engineering, and quality control.  I and am really enjoying it.

TCM: How did you get access to a 2016 Toyota Tacoma? It hasn’t been released yet.

Ben: SEMA offers measuring sessions to its member companies.  These sessions allow us to get early access to pre-release vehicles for measurements and other important specifications.

Through SEMA, we were granted access to the 2016 Toyota Tacoma, and the new 2016 Nissan Titan diesel trucks.  At these sessions there will be between forty and fifty other companies taking measurements for their products.  Everyone signs NDAs, or non-disclosure agreements, so no photography or information we gather is shared.

TCM: How do you go about taking the measurements from a SEMA session and designing Hellwig products?

Ben: For the 2016 Toyota Tacoma, most of the 2015 products simply carried over.  Toyota made significant changes to the styling of the truck, but the suspension is unchanged.  If they had made changes, we would have needed to bring in a 2016 Toyota Tacoma into the Hellwig plant, and perform testing.

TCM: So the changes to the size and weight of the truck don’t change your product design?

Ben: For the size and weight changes to affect our design they would have to be more significant.  Our Tacoma products have already taken into account the wide variety of trim levels, body styles, and bed lengths available for the Tacoma.  The relatively slight changes in weight and and cab sizes in the 2016 Toyota Tacoma are not enough to affect our product design.

Above: Hellwig’s air suspension kit for the 2016 Tacoma

Ben: We were able to make that determination when we saw the suspension was unchanged.  It’s actually not that uncommon for truck manufacturers to revise their trucks, but not change their suspensions.

TCM: That must be great for you.

Ben: I love when I show up to a SEMA preview and there are no changes.  It’s a hit or miss as to whether that happens, but it makes life easier for us when they don’t make a change.

TCM: Do you verify the product fit after the preview sessions?

Ben: Yes, we do.  We will go to a local truck dealer and make sure that the production truck didn’t change, and that everything fits correctly.  Then we’ll do a full range of tests on the vehicle and product to check performance.

Above: The Toyota Tacoma front (left) and rear (middle and right) sway bars – click to enlarge

TCM: Tell us about developing the new Hellwig 2016 Toyota Tacoma rear sway bar.  What’s different about that product versus the 2015 version?

Ben: It wasn’t a complete from-scratch design.  I started with our existing second generation Tacoma rear sway bar, and modified the mounting brackets, U-bolts, and plates.  I also needed to change to attachment points to the axle.

More often than not, the parts from another kit are a perfect match.  For example, part of our Toyota Hilux kit matched up perfectly with the new Tacoma.  When you make thousands of kits for different trucks, that happens.  The final parts kit for the 2016 Toyota Tacoma is half from the 2015 Tacoma and half from the Hilux.  Together, they’re a perfect fit.

TCM: From your product information, the EZ-990 helper spring is also a new product for the 2016 Tacoma.  Is that correct? 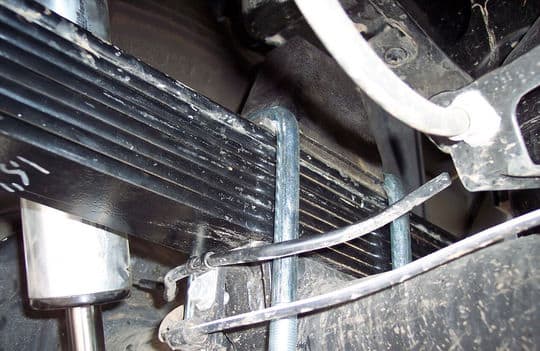 Above and Below: The 5-leaf helper spring (1906) that is recommended for the Tacomas hauling truck campers – click to enlarge 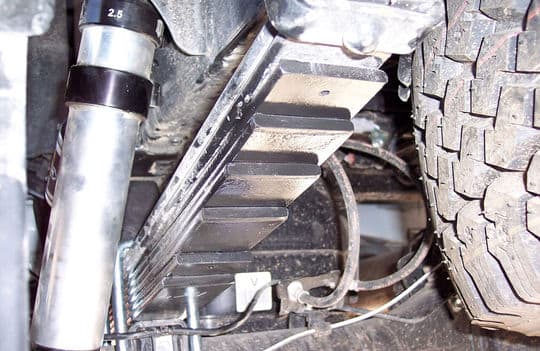 TCM: What Hellwig products would you recommend for a Toyota Tacoma with a truck camper?

Ben: We would recommend our 5-leaf helper spring (1906), which we designed with Four Wheel Campers.  To install the 5-leaf system, you remove the factory overload, and put the 5-leaf system in.  It’s the best solution we offer for someone who will have the truck camper on most of the time.  It adds a lot of spring rate, but it’s still comfortable.

That’s our best solution for Tacomas with truck campers.  It was actually designed for truck campers specifically.  If your camper has a cabover bed and holding tanks, the Hellwig 1906 is the way to go.  I would also recommend front and rear sway bars to help eliminate sway.

Above: Light, medium, and heavy duty (1906) helper springs for the Tacoma – click to enlarge

TCM: In your opinion, for a truck camper rig, is the 2016 Toyota Tacoma a more capable truck than the 2015 Toyota Tacoma?

Ben: Well, the suspension is almost exactly the same.  The main difference is with the additional engine options.  The new Tacoma will offer more power, which could improve the performance of the truck under load.  They also have a new e-locker design, and a few other tweaks.  Other than that, I haven’t had enough experience with the truck to make that call.

Ben: Once again, through SEMA. There’s a SEMA garage in southern California where we got access to the 2015 Mustang and 2015 F150 before they were released to the public.  On the F150, the front suspension is unchanged, but the rear is quite different.

This time, we needed to return to the shop with our measurements and design new products.  Once we had manufactured the prototypes, we brought in vehicles to check fit and test performance.  The SEMA preview gave us a month’s head start, but we needed to have the physical vehicle on hand to complete our design and product testing.

The result is an all-new rear sway bar for the 2015 Ford F150, and all-new mounting brackets for the air suspension kit.

Above: Hellwig’s all-new rear sway bar (right photo is a lifted sway bar) for the Ford F150 – click to enlarge

Ben: The final round of testing is called a ride and drive.  Essentially, I install the products on the truck, take it to the boonies, take corners hard, and generally study how the product performs.  I have a loop with tight turns and bumpy roads.  I’ll also install weight into the truck to see how that changes performance.

Initial product design is 80% measurements and calculations.  The last 20% is the art of tuning.  The science makes sure the product is designed correctly, but the tuning determines how the vehicle feels to the driver.

Above: The one and two leaf helper spring kits for the F150 – click to enlarge

TCM: Did the aluminum structure of the truck affect your design considerations?

Ben: Not in our case.  Everywhere we are attaching our products is steel on steel.  The frame, axle, and leaf springs in the 2015 Ford F150 are all steel.  Other companies have had issues as their steel products need to attach to the aluminum body.  Steel on aluminum causes corrosion.

TCM: You’ve been able to put the 2015 Ford F150 through its paces a little bit.  What is your impression of the truck?

Ben: As far as handling in turns, it’s not a huge change.  The truck lost 600 pounds by going to aluminum, but that’s not enough to make a huge change to the overall performance of the truck.  We regularly do our tests loaded with thousands of pounds in the bed.  I did notice a change in acceleration between the 2014 and 2015 in their unloaded conditions.  That’s where I noticed the 600 pound difference the most.  Overall, it drives and performs comparably to the 2014 Ford F150.

Above: The air bags for the F150 – click to enlarge

Ben: I like our air suspension system on the F150.  It works great with campers.  Our air bags are quite large which makes them particularly well suited to truck camper applications.  We also offer helper springs.  They are great for folks who don’t like to always adjust their air suspension and want something to install once and then forget about.

Mike: Springs are great if you’re going to be loaded most of the time, but air suspension is good for weekend warriors, or folks who go truck camping maybe once a month.  They can air up the system when loaded with the camper, and return the truck to it’s normal suspension when unloaded.  Air suspension is a better solution for trucks that are also used for commuting.

TCM: Mike, tell us how you came to work for Hellwig and what your responsibilities are.

Mike: I’ve been in the automotive aftermarket industry for about ten years.  I worked at Advanced Clutch Technology (ACT) and then T-Rex Grilles.  Through the industry I met the folks at Hellwig and it seemed like a good fit for both of us.  For me, working with Hellwig worked better both professionally and as a lifestyle.

TCM: And what’s your title? 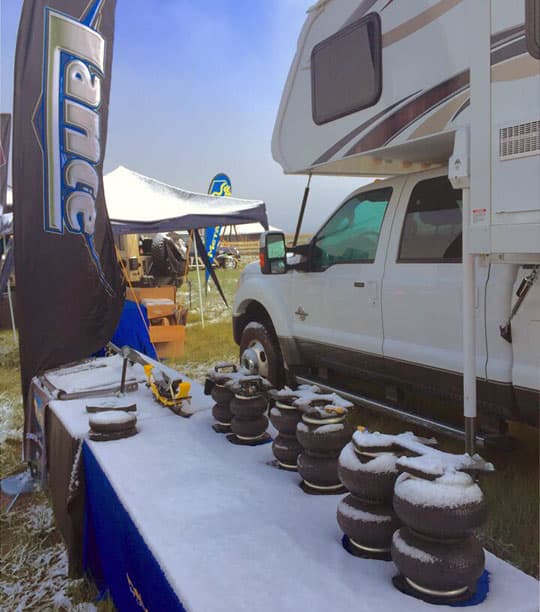 Above: Snow at the Overland Expo West

TCM: We have driven trucks before and after installing Hellwig products and can certainly vouch for the immediate difference they make.  Tell us about your experience at Overland Expo West.

Mike: Overland Expo West was a great experience.  I’ve been a long time overland enthusiast and own an overland vehicle myself, a Land Rover Discovery I.

I attended Overland Expo with Jim Waters of Lance Campers.  Hellwig Products has a great relationship with Lance Campers.  They’re also quite close to our headquarters in Visalia, California. 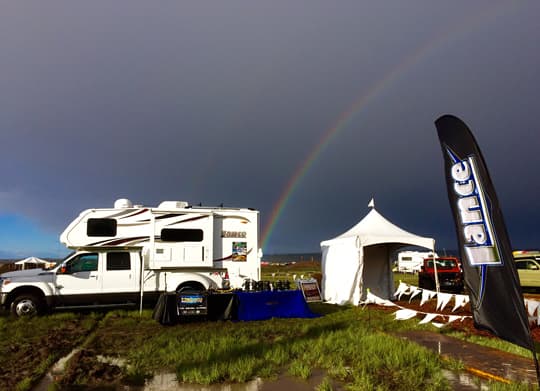 Above: Jim and Mike created a bridge (bottom right of photo) at Overland Expo West so people could enter their booth

There was quite a rainstorm at the Expo West this year.  Of course the overland community knows how to deal with nature, and what she throws at us.  Our booth resembled a rice paddy; flooded inches deep.  Jim and I made the most of it, creating a trench through the booth for the water, a bridge, and generous amounts of straw.  It worked.

For more about Hellwig products, visit their website at www.hellwigproducts.com.