Fresh on the heels of the aluminum-bodied 2015 Ford F150 released late last year, Ford has just announced the all-new aluminum-bodied 2017 Ford Super Duty series.  After reading through Ford’s press release and reviewing initial photography, it appears the blue oval team may have a very important truck for the truck camper market.  Before we get to that, let’s dig into the news, and take a look at this exciting new truck.

The exterior styling of the 2017 Ford Super Duty series clearly takes its design cues from the aluminum-bodied 2015 Ford F150.  At first blush, some may even mistake these new trucks for the less capable half-ton. 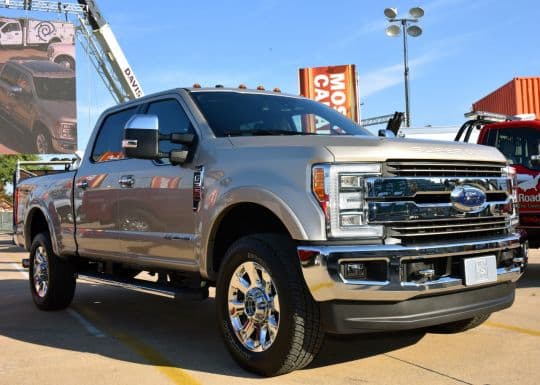 Above: The 2017 Ford Super Duty being presented at the Texas State Fair – click to enlarge

Above: The interior of the Ford F250 Lariat (left) and the Ford F450 Platinum (right) – click to enlarge

The interior styling is also pulled from the 2015 Ford F150, and draws heavily from the existing Super Duty.  The angled vents that dominate the visual presentation of the dash in the F150 appear again in the 2017 Super Duty trucks.  The family resemblance is unmistakable.

While we want our trucks to be visually appealing, there’s no point talking about style if the performance and capacity doesn’t measure up.  Thankfully, this is where the new 2017 Ford Super Duty series really raises the truck camping eyebrows.

Above: The all-aluminum body of the Ford Super Duty Series – click to enlarge

Aesthetics aside, Ford’s main focus was on reducing the weight of the new Super Duty trucks to improve the payload capability, towing capacity, and fuel efficiency.  This was primarily accomplished with two important changes; a new high-strength steel frame, and a new all-aluminum body.

Similar to the 2015 Ford F150 that proceeded it, the 2017 Ford Super Duty series features a high-strength, military-grade, aluminum alloy body.  Ford claims their new all-aluminum body is both impervious to red rust corrosion and offers a higher resistance to dents than the pervious steel body.

Above: The frame is fully-boxed and 95% high-strength steel – click to enlarge

The all-new truck frame is fully-boxed and constructed with 95-percent high-strength steel.  According to Ford, the new frame is 24-times stiffer than the previous Super Duty frame (see above photographs).

Together with the new all-aluminum body, the new high-strength steel frame helps to reduce the weight of the new Super Duty trucks.  Ford claims to have removed up to 350 pounds from the 2017 Super Duty truck builds.  This weight savings, in turn, increases the overall towing and hauling (payload) capacity of the new Ford trucks.

Diesel engine fans will be chomping at the bit for more information on the second-generation 6.7-liter Power Stroke diesel V-8, but power and torque information has been withheld at this time.  Will Ford be the first with 1,000 lb-ft of torque?  Most rumors and speculation point to yes. 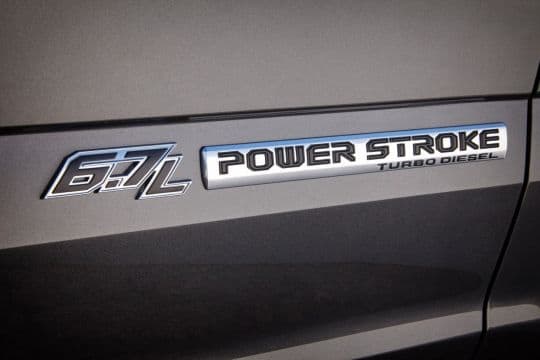 Above: The 6.7-liter Power Stroke® V8 turbo diesel engine is available for pickup trucks and chassis cabs – click to enlarge

For gas engine connoisseurs, including yours truly, Ford will offer an improved 6.2-liter V-8 and their proven 6.8-liter V-10, the latter for cab and chassis models only.  Perhaps the most exciting news in the gas engine category has nothing to do with a new gas engine, but rather an all-new six-speed transmission for the 6.2-liter, called TorqShift-G.  We look forward to learning more about the 6.2-liter improvements and the TorqShift-G as information becomes available.

One feature that is sure to excite many truck camper enthusiasts is the central high-mounted brake light camera.  This high-definition camera is designed to give the driver a clear rear view of the truck bed. 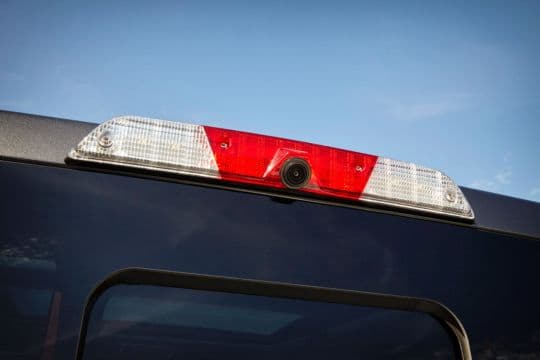 Above: The cab-mounted brake light camera – click to enlarge

With the cab-mounted and high-central position of the brake light camera, it’s possible that this new camera system could be extremely useful for loading and unloading a truck camper.

Did Ford just revolutionize how we will load and unload a truck camper in the future?  It’s certainly possible, but don’t get too excited – yet. 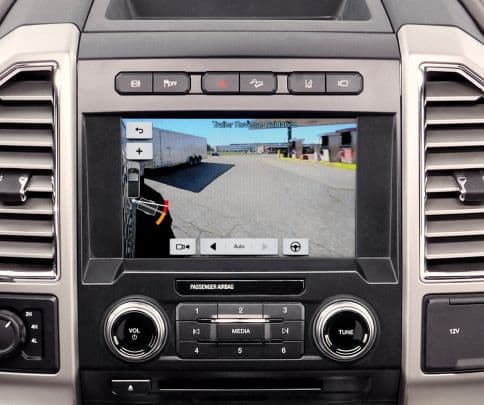 Another important development in the camera technology category is the announcement of a factory-available trailer camera.  This trailer camera is designed to be attached to a trailer to provide visibility while backing up.

Above: The factory-available trailer camera is designed to be attached to a trailer, or possibly even your truck camper – click to enlarge

For truck camper rigs, this accessory back-up camera could be used on the rear of the truck camper itself, or on a towed trailer.  Having the convenience of this camera being tied into the factory dash for monitoring is fantastic.

For all of you out there who have longed for a Ford Super Duty with radar, Ford gives you BLISS; aka the Blind Spot Information System.  With a series of radar (yes radar) sensors in the rear brake lights, this new system will monitor blind spots and ward you of potential collisions.  Hopefully this system will not completely freak out when we load a truck camper with an overhang.  Ideally, it will be easy to enable and disable with an interior switch or button.

Again, both of these features use sensors that were probably not designed with a loaded truck camper in mind.  Will a camper corner jack spook the lane departure sensors?  Could the cabover trigger the adaptive cruise control?  Probably not, but it will be interesting to see how these new sensors handle the basic physical realities of a loaded truck camper.

Ford has announced a new in-cab trailer tire pressure monitoring system that should be a great safety feature for the 70-percent of our readers who tow. 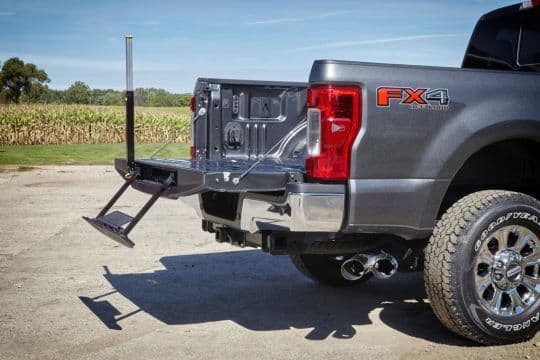 Above: The remote tailgate lock and release allows the tailgate to be opened with a key fob – click to enlarge.

Remote tailgate lock and release allows the tailgate to be locked, unlocked, and opened remotely with a key fob.  The tailgate is damped allowing it to lower gently, hands free.  Of course 99-percent of us take the tailgate off and leave it at home, so this isn’t exactly a big deal for truck camping. 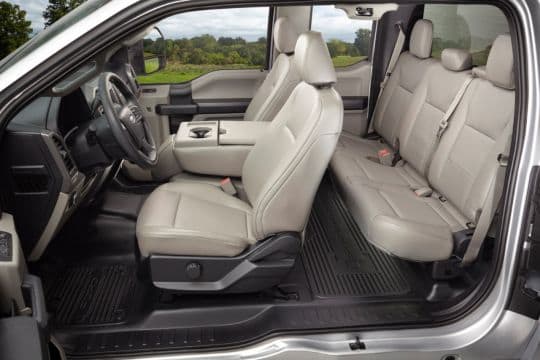 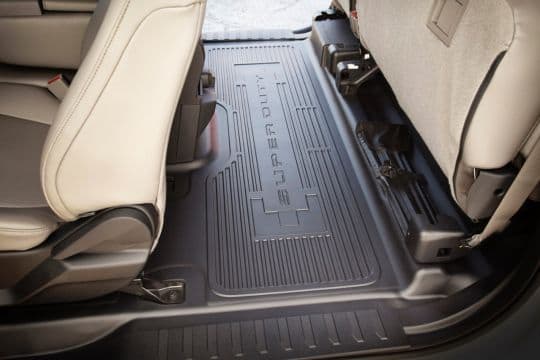 The Super Cab and Crew Cab configurations have flat second-row floors.  This is certainly good news for those of us who like to store items in the back seat of our trucks. 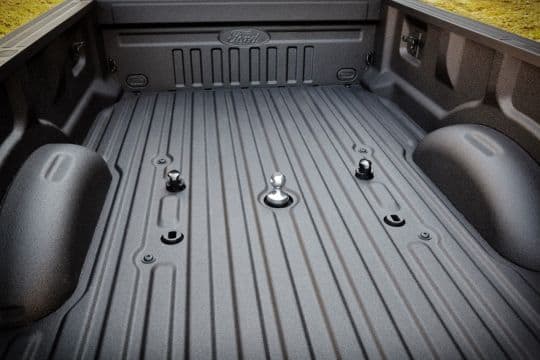 Above: The metal brackets and custom cleats – click to enlarge.

Ford’s BoxLink system consists of metal brackets and custom cleats to secure accessories to the cargo box.  This feature may be of interest to the pop-up camper community for tie-down points, is probably less relevant to the greater truck camper marketplace. 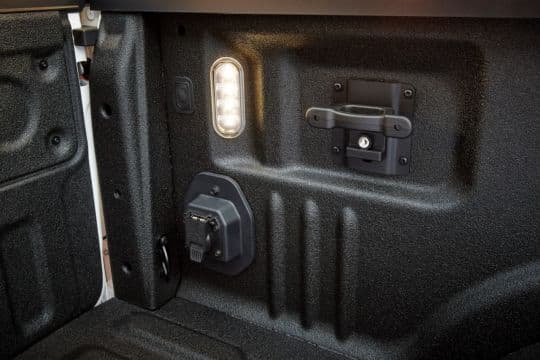 If you get your kicks talking to your truck, and having it respond, the new SYNC 3 promises conversational voice recognition and a more intuitive interface. 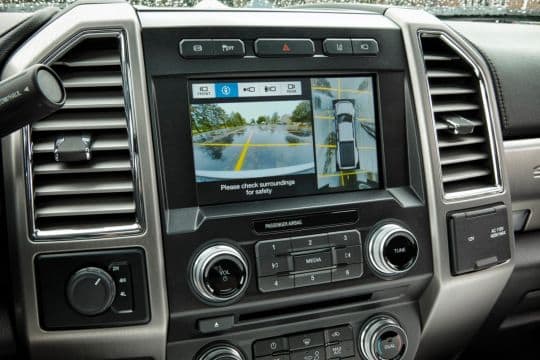 And last, but not least, Ford has gone completely LED light happy with LED sideview mirror spotlights, quad-beam LED headlights, LED tail lights, and LED truck bed lighting.  The LED sideview mirror lights are great for illuminating a dark campsite.  The LED truck bed lighting could be handy for folks who are crazy enough to load their campers at night (please don’t ever do this).

Whenever an all-new truck design is announced, there’s a concern that the exterior dimensions have been changed in a way that could conflict with existing truck campers.  While this is unlikely to be serious, major truck redesigns have created conflicts in the past.  For example, Ford’s own 2005 Super Duty design featured a taller cab necessitating the use of platforms to raise some campers above the cab to avoid contact. 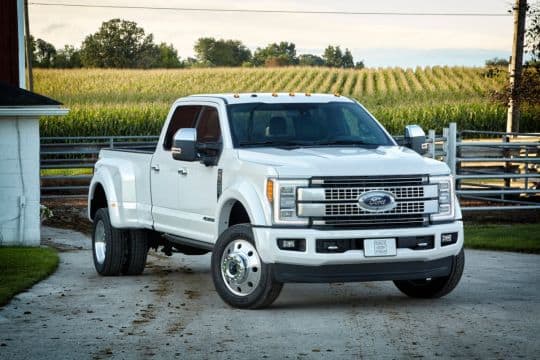 I bring this up because Ford has already announced that the 2017 Ford Super Duty features some potentially significant dimensional changes.

“The truck sits higher off the ground, is wider, and the cabs are up to five inches longer than the outgoing model, depending on the trim level,” said Gordon Platto, Chief Designer, Ford trucks.

Believe me when I tell you that the truck camper industry is very eager to measure every dimension of this new truck series.  If you are considering a 2017 Ford Super Duty, please pay close attention to the measurement details as they emerge. 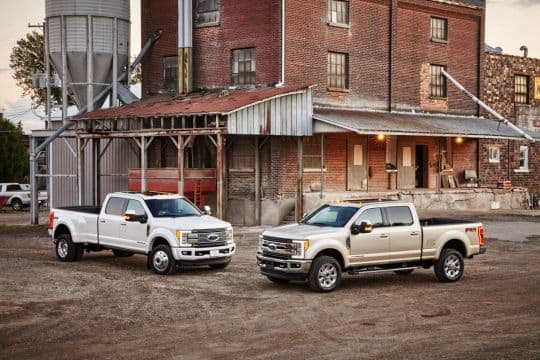 We will bring you more information on the 2017 Ford Super Duty series as it becomes available.  We will even approach Ford about touring the Kentucky Truck Plant again to see these new trucks roll down the line and out the door.  Speaking of rolling, Ford says the 2017 Super Duty trucks will be available starting late 2016.