Gary Anderson gets payload sticker shock when his brand new 2018 Chevy Silverado 3500 arrives.  Loaded and wet, his intended camper will be too heavy.  Now what? 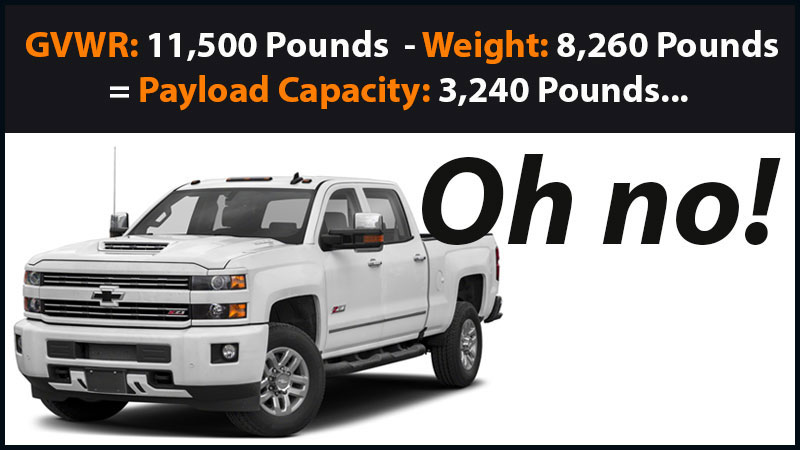 Gary Anderson first contacted us by filling out our Bought A Camper form.  He had special ordered a 2018 Chevy Silverado 3500 short bed with the Duramax diesel engine, off-road package, 220-amp alternator, Snow Plow Prep Package and Trailer Package. According to the Chevy website and brochures, the GVWR would be 11,500 pounds. 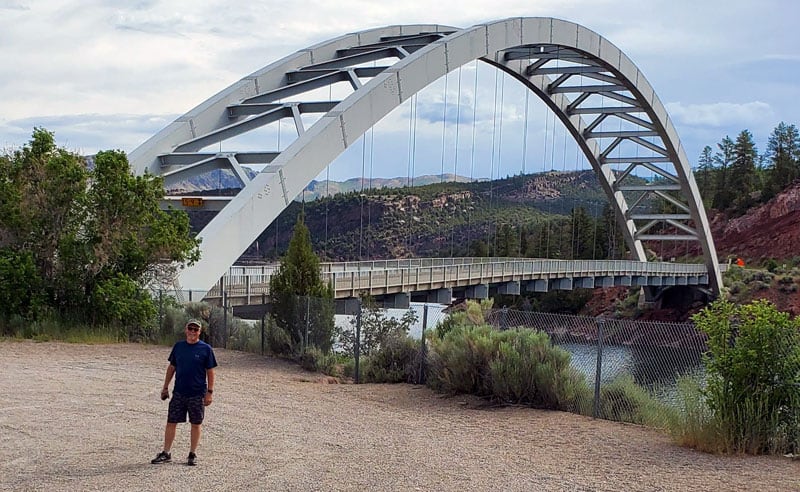 Gary was excited about this truck configuration for two reasons.  First, it would be an excellent match for a Lance 855S truck camper.  Second, the truck would be a comfortable daily driver.  That’s the kind of versatility we were looking for when we purchased a similar (although gas engine) Chevy Silverado 3500 in 2012.

“Having had a Class B van for nine years and a Class C Sprinter van for the last two, we felt comfortable with purchasing a truck camper.  We want to travel more off the beaten path,” he explained.  Since Gary had followed our article, “How to Match a Truck and Truck Camper”, all signs pointed to a proper match.

Then the truck arrived.

“Well, I picked up my new truck on Saturday.  Wow, is it big!  Following your great advice in Truck Camper Magazine I took it to the CAT Scale and weighed it with the fuel gauge reading full and my wife riding shotgun.

With this new information, Gary worked with his Lance dealer, Mattas Marine & RV in Grand Junction, Colorado, to come up with an excellent solution.  He switched to a Lance 865, a short bed non-slide camper with a optioned, loaded and estimated wet weight of 2,897-pounds.  Gary’s rig would now be under payload.

Gary lost a slide-out in the bargain, but he now had a safe truck and camper match.  This would become even more important when we learned that Gary would sometimes carry a hitch-mounted bicycle rack and tow a motorcycle trailer.  With this revelation, the 865 was definitely the better choice.

“I already took it to the scale and, with water, propane, and options, I’m 420 pounds under GVWR. We still have to load personal stuff and food, so we should be right on target.” 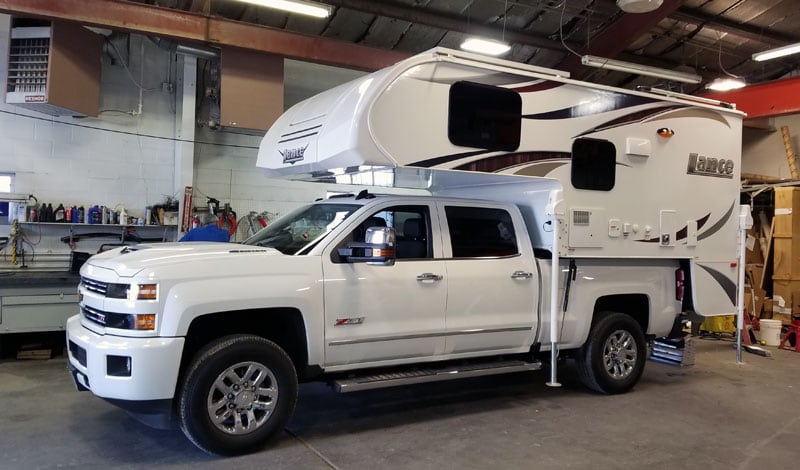 The day Gary picked up his camper he emailed us again. “I just picked up my new camper, a 2019 Lance 865.  I already took it to the scale and, with water, propane, and options, I’m 420 pounds under GVWR.  We still have to load personal stuff and food, so we should be right on target”. 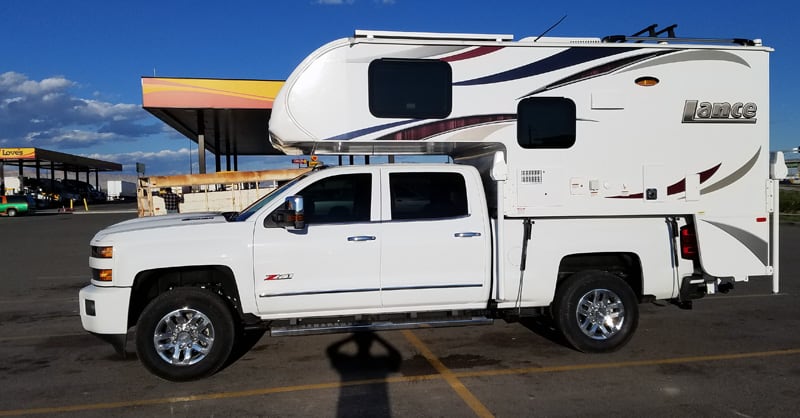 After Gary’s first outing with his new rig, he wrote us again. “We did a shake down last night at a place called Rabbit Valley.  It’s not too far away, but gave us the chance to get on the highway and see how the whole thing handled.  We are impressed with our new camper.” 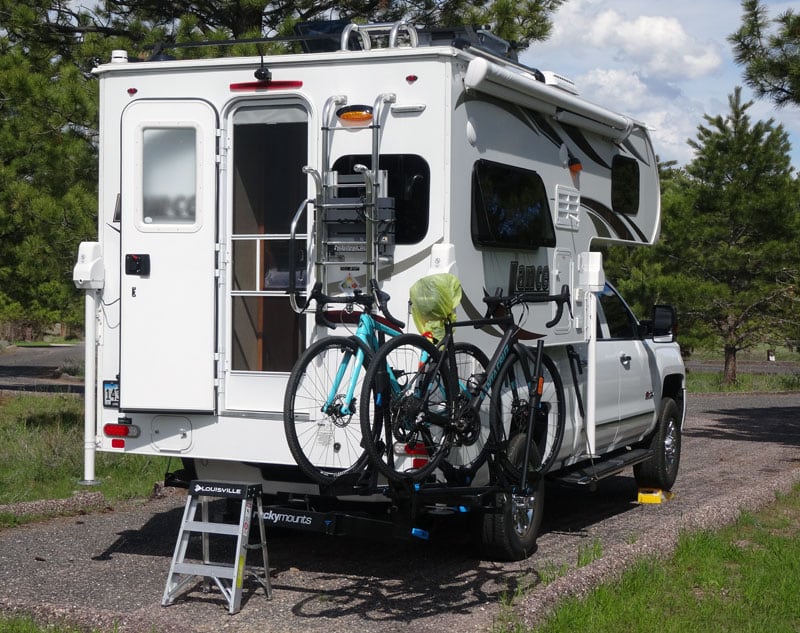 We hadn’t heard from Gary in awhile when another email pinged our box.  He and his wife had taken the rig to Utah and Idaho to experience the truck camping capabilities and lifestyle they had craved.

“Our first adventure in our new truck camper was an eleven day trip.  We left our home in Grand Junction, Colorado and headed north to meet some friends at Bear Lake on the Utah and ­Idaho border.  The only time we were on a major highway was between Grand Junction and the Loma exit of I­-70, which was for about 18-miles.  After that it was all two lane roads.

Our first challenge was traveling over Douglas Pass.  It’s a winding, narrow and steep road with 7-percent grades.  It reaches an elevation of 8,268-feet.  For the first real trip in our camper, this was an exciting drive.  Going down the north side was just as exciting with sharp hairpin turns and more steep grades.

Reaching the valley floor, we headed toward Vernal, Utah.  On the way you pass Dinosaur National Park.  We have been here before and it is a very interesting side trip.  There is a campground there with limited services.

After passing through Vernal the next big challenge was going over a road that passes a large mining operation.  It is a narrow road with 21-switchbacks and a maximum speed of 25 miles per hour.

Once we were over the top we had clear driving to Red Canyon State Park overlooking Flaming Gorge National Recreation Area.  We planned on staying there for the night.  After years of driving miles and miles, five hours is a comfortable day for us. 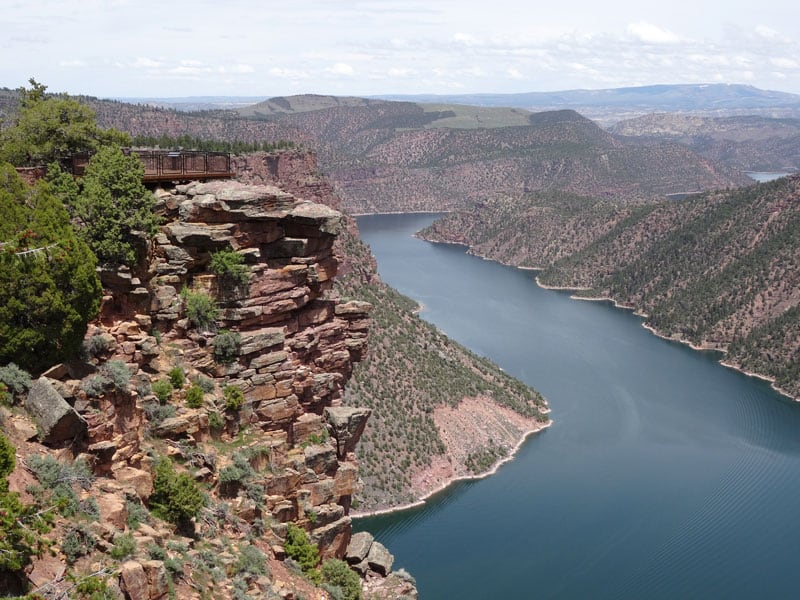 Red Canyon sits above the gorge with a rim trail that, as its name implies, goes along the canyon’s rim overlooking the gorge.  The views are spectacular!  The campsite had no services. 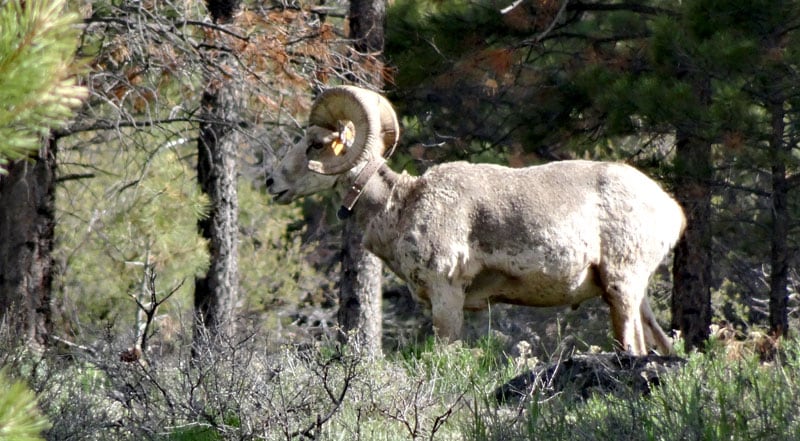 A small herd of Bighorn sheep walked through that evening. 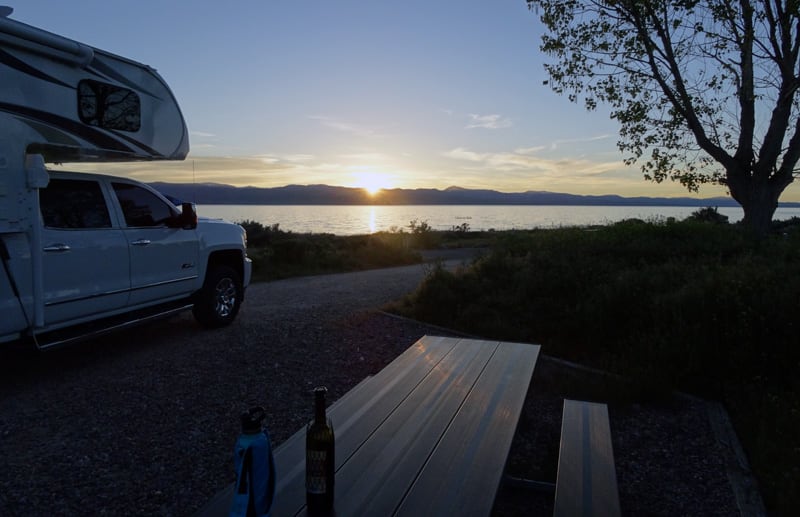 Above: Bear Lake on the Utah and ­Idaho border

The next morning we headed out to Bear Lake.  This is a large lake located in northeast Utah that spans Utah and Idaho.  We were meeting friends from Denver on the East Shore at an Idaho State Park Campground.  We spent four days here bicycling and kayaking and generally enjoying the turquoise blue water of Bear Lake.

Then it was time for us to caravan to our next stop.  We were heading to Castle Rock State Park in Idaho where we spent four nights. 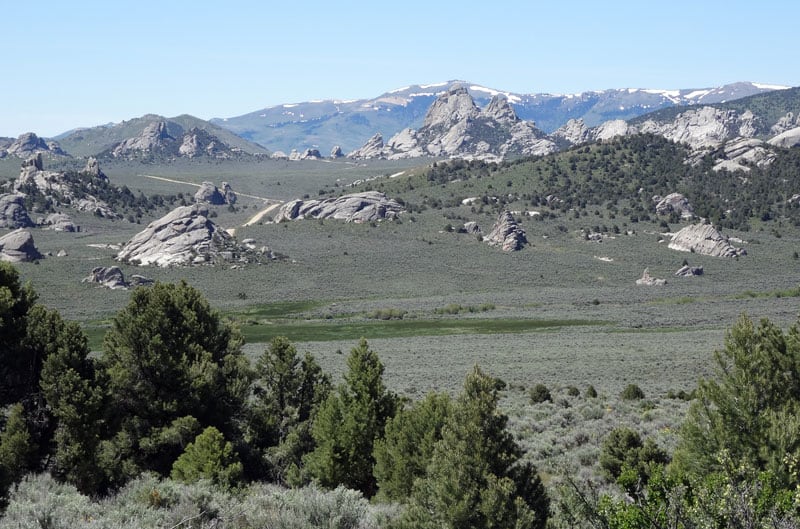 Above: City Of Rocks in Idaho

Touring and hiking through the reserve offers impressive views of the formations.  On one rock, wagon trains wrote their names.

This trip was a true test of our new truck and camper.  On one night we had snow.  For two nights the overnight temperature was about 35-degrees.  We survived with no issues.  I must say the new camper was warm and toasty.

Finally, it was time to leave.  We both headed out south through Idaho into Utah before heading our separate ways home.  We made one last slight detour together to Promontory Point. 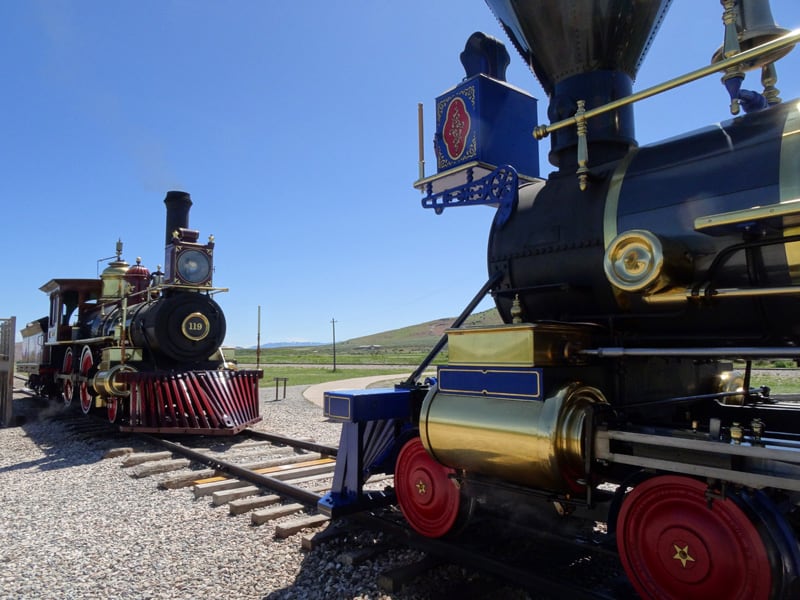 Promontory Point is where the East and West railroads met and the Golden Spike was driven connecting the two rail lines.  This opened up transcontinental rail transportation.  There are replicas of the actual locomotives that reenact the event every few hours.  Being somewhat of a train buff, this was a must see stop for me. 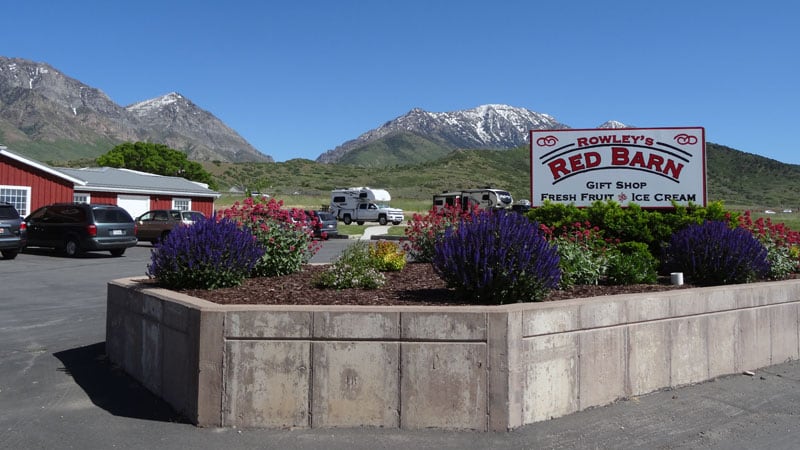 Our last night we spent the night at a Harvest Host site.  It was just off the freeway and a little noisy, but the fruit pie and ice cream were a real treat.

The next morning, we headed home to Grand Junction.  All in all it was a great first trip in our new truck camper.”

“If you take the time and care to properly match your truck and camper, you can instantly move past questions about rig handling and safety and get right to what you really want; travel and adventure.”

If you take the time and care to properly match your truck and camper, you can instantly move past questions about rig handling and safety and get right to what you really want; travel and adventure.  Photography, fishing, rock climbing, rallies, record hunting – it’s all on the menu once your rig is properly matched and assembled.

Along that matching journey you might be faced with a few tough choices.  Gary was set on a short bed diesel and had the tough choice to go with a lighter camper to make that match work.  You might discover that you need a dual rear wheel truck for the long bed camper of your dreams, or a smaller camper because you don’t want a dually.

Tough choices?  Not really.  Just physics, and what it takes to assemble a safe and responsible truck and camper match. 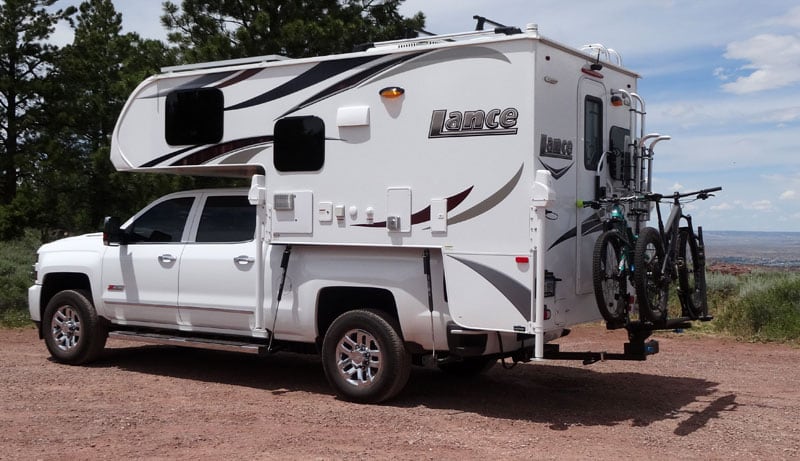