Like all truck camper jacks, Rieco-Titan camper jacks need to be properly operated and maintained to ensure safe operation and product longevity.  While we were at the Rieco-Titan factory in Frankfort, Illinois this past spring, we talked to Doug Bakker, Rieco-Titan’s Product Designer, about exactly how to operate and maintain their jacks.

The first thing you should do to maintain your Rieco-Titan jacks is raise your camper all the way up and wash each inside and outside jack tube with soapy water.  If there are any rust spots, take a piece of sandpaper and sand it off.  After sanding the rust off, you can apply a coat or two of RustOleum paint or metal silver spray to freshen up your inside jack tubes.

The outside tubes should be waxed with a liquid wax such as Mercury’s Corrosion Guard, Mother’s Polish, McGuires, or Turtle Wax.  If you live in high maintenance areas where you are exposed to sand, salt, and high humidity, you will need to wash and wax your jacks more often.  You should also regularly exercise your jacks by raising and lowering them at least once a month.  This spreads the grease around and keeps the jacks healthy. 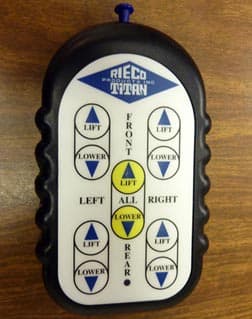 Rieco-Titan has some recommendations for safely raising and lowering your truck camper.  First, Doug explained that truck campers are heavier in the front than the back.  This front to back weight difference causes the front jacks to work harder and slower than the rear jacks.

Before you press, “ALL LIFT” on the Rieco-Titan remote, make sure that your front nose is approximately three inches higher than the rest of your camper.  When you have achieved this, raise your camper about a foot at a time using the “ALL LIFT” button.  Each time you raise the camper another foot, raise the front nose another three inches to allow the front jacks to catch up the rear jacks.  Then resume raising your camper with the “ALL LIFT” button and continue this process until your camper is at the desired height.  Doug reminded us several times to never allow the rear of the camper to be higher than the front of the camper.

The advantage of having a wireless remote is that you can walk around the camper and monitor the raising and lowering process from a safe distance.  Follow the same process described above when lowering your camper.

One interesting detail that Doug mentioned is that Rieco-Titan electric remote jacks use about fourteen amps when raising a camper and six amps when lowering a camper.  These numbers are based on raising and lowering a 4,000 pound camper.

Truck campers with Rieco-Titan remote electric jack systems feature a remote receiver box located inside an interior compartment or cabinet.  The remote receiver box has two power switches, one on the box itself and another on the remote access panel located just inside the camper entry door.

As a camper owner, these LED lights are used for troubleshooting.  For example, if one of your jacks is not working, you can look at your receiver box LED lights.  If one of the LED lights is not turning on, this indicates that one of your fuses needs to be replaced.  The receiver box circuitry is protected by eight 30 amp automotive fuses.  The fuse that needs to be replaced is the one next to the failed LED light.

Rieco-Titan remote electric jacks come with a remote control that can be used wirelessly or plugged in via a supplied cord.  The cord acts as a back-up and supplies power to the remote should the remote control battery fail.

To change the battery, remove the remote control cover using a small screwdriver.  Inside you will find the 12-volt alkaline A23 battery to replace.  These batteries are commonly available at Walgreens or Home Depot.

The Rieco-Titan remote is water resistant, but not water proof.  If you accidentally drop your Rieco-Titan remote into water (or any electrical device such as a cell phone or iPod) immediately dry the remote and put it into a bag of uncooked rice.  This trick does not always work, but the rice should draw the moisture from the remote or other electronic device.

How To Manually Crank Your Electric Jacks 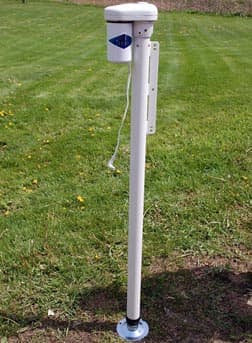 For those of us with remote electric jacks, it’s important to know how to manually raise and lower our camper should the situation arise.  Doug walked us through the process.

First, pop-off the manual crank cover with a flat head screwdriver.  This will expose the manual crank socket.  Using a three-eighths inch ratchet, manually crank your jacks up or down.  When manually cranking, you need to start with your front camper jacks.  Raise the front of your camper about three inches on each jack, then go to the back and raise three inches.  Repeat this with all four jacks, rotating around the camper until it is at the height you need it at to load or unload.

Rieco-Titan offers five types of mechanical jacks; Welded Mounting Plate Jacks, C-Clamp Jacks, Heavy Duty Tripod Jacks, Standard Tripod Jacks, and Hydraulic Jacks.  A welded mounting plate jack (left) has a locked in cranking position based on the location of the camper’s brackets.  C-Clamp mechanical jacks (right) allow you to position your jack to whatever angle you need for cranking.

Mechanical jacks need to be manually cranked with the crank handle that comes with the jacks.  You will receive two crank handles with your mechanical jacks so two people can crank at a time.  When raising mechanical camper jacks, start with your front jacks.  Raise the front of your camper so that the front nose is higher than the back.  Then raise the jacks in rotation raising the camper about three inches with each rotation.  Repeat this process until your camper is at your desired height.

All mechanical jacks should be oiled once a year with 10W40.  To oil the jacks, squirt enough oil into the gearbox to keep the jacks lubricated.


Tripod jacks are used because some campers need to be supported by the bottom of the camper instead of the sides.  Rieco-Titan offers two types of tripod jacks; the Heavy Duty Tripod Jack (left) and the Standard Tripod Jack (right).

With both types of Tripod jacks, the crank has two sockets; one for the wrench and one for the crank.  The wrench socket also allows you to change your tripod jack from a vertical to horizontal position when you drive your rig.  The tripod part of the jack needs to be stored in your truck or camper.

You should squirt 10W40 oil into your gear box once a year to lubricate your tripod jacks.  There is also a hole below the gear box to squirt oil on the jack post screw. 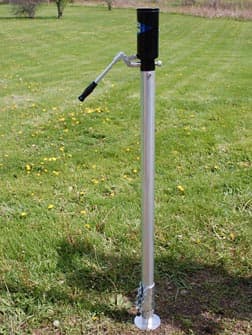 If you have any questions about how to use or maintain your Rieco-Titan jacks, you can contact Doug directly at Rieco-Titan via email at [email protected]  Doug or another Rieco-Titan customer service team member will answer your questions.