Camper jacks are an often overlooked feature of a truck camper, but they are the key feature that make modern truck camping possible.  Think about it, truck campers that you couldn’t load or unload wouldn’t be much fun.  If life were a drive through, we would order our truck campers to go.  Camper jacks make that happen, often at the touch of a button.  Isn’t modern life grand?

Getting back to Happijac, we visited the factory and enlisted the help of Don Payne, Happijac’s Product Manager, to tell about the proper operation and maintenance of Happijac camper jacks.  All kidding aside, this is serious business as we not only need camper jacks to work, but we need them to work reliably, and safely.  As you’re about to read, proper use and maintenance is the key.  Thank you to Don for helping us with this important information.

Happijac manufactures two types of camper jacks at their factory in Kaysville, Utah; acme screw camper jacks and ball screw camper jacks.  On the head of each Happijac camper jack, there’s a sticker that tells you the model number of that jack.  All of Happijac’s mechanical jacks can be converted into remote controlled electric jacks with a Happijac conversion kit.

According to Don, the square steel inner and outer tubing offers additional strength to the design to resist possible twisting, bending, or other structural compromises during loading and unloading.  To further strengthen their camper jacks, Happijac has added a strip of one-quarter inch steel at the bolt strip, where the outer tube connects to the camper.  Don said that the bolt strip is a full eighteen inches from top to bottom to add even more of a strength and safety margin.  As Don explained it, Happijac is very conservative with it’s camper jack ratings and over designs their jacks for safety.  Of course this is not an invitation to overload your jacks, but it’s certainly reassuring to hear that Happijac is serious about our safety.

Moving down the square tube, the foot of a Happijac camper jack is shaped like a lifted cup.  Don explained that this design feature helps to compensate for the fact that truck campers often lean and rock just a little one way or another when raised.  This lifted cup design allows the jack to lean and rock with the camper while keeping the camper weight centered on the jack.  Don suggested that if the foot were flat or cupped down the weight would be on the edge of foot and could over stress the jack leg.

If a Happijac camper jack does experience a problem, Happijac offers a service to recondition their jack products.  If the Happijac technicians determine that the camper jack is repairable, the charge is $59.95 plus shipping to recondition the jacks including replacing all worn parts and re-lubricate the jack.  To arrange to have your Happijac jacks reconditioned, contact Happijac customer service at 800-231-7440 and arrange for a Return Merchandise Authorization (RMA) number. 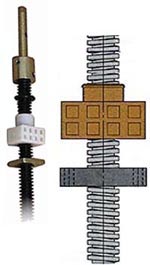 Happijac also has a floating safety nut on their acme camper jacks for redundancy.  The floating safety nut only carries the load if the primary nut fails, which, according to Don, makes Happijac 4150 jacks as fail safe as possible.  The Happijac camper jacks can break a roll pin if they’re overextended or retracted and allowed to “ratchet”, but Don stated the roll pin breaking only disconnects the screw from the motor and does not create a safety hazard.

The rating on the Happijac 4150 acme camper jack is 1,500 pounds per jack under the ANSI national standards.  With the acme jacks, it takes six revolutions to move an inch vertically.  Don explained that you have 34” of extension on the Happijac 4150 before you get a warning and the jack is overextended.  Happijac does sell an extension kit for people who need more leg length in their jacks, which gives you an additional six inches.

We asked Don about the occasional ratcheting sound we hear from our Adventurer’s Happijac camper jacks.  He explained that the clutch inside the motor of a Happijac camper jack is designed to ratchet when it’s overloaded.  If this occurs, Don suggested rebalancing the camper with the other three jacks to relieve some of the weight off the ratcheting jack.  If it does not correct, call customer support for problem solving help.  If a leg has been bent from improper use, this ratcheting may occur.

What if our batteries die, or we lost the remote control for our electric Happijac camper jacks?  Don answered that you can always hand crank your electric jacks to get them to retract and lower (or raise) your truck camper.  To do this, remove the white cap on the camper jack leg covering the crank socket, and use the hand crank.  Push the lever down.  This disengages the motor by lifting the coupler off from the screw.  Manually cranking will bypass the motor and engages the gears directly.

Another issue that we’ve heard about is electric camper jack remote controls unintentionally triggering the jacks of other nearby camper jacks.  This has never been the case with Happijac wireless remotes.  Other manufacturers had this problem. Happijac electric remotes have unique addresses and programming sequences.  This eliminates the problem and avoids you accidentally raising or lowering your neighbor’s camper.

There are some things that can be done in the field by the jack owner to maintain the jack.  After removing the motor head assembly, there are two beveled gears in the top.  Add white lithium grease, liberally, to the gears. 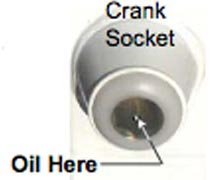 Another maintenance item is to lubricate the manual crank socket.  Lubrication on the outer side of the socket shaft is necessary to reduce friction.  If your jack is newer, there is a hole inside the crank socket.  Position the hole down and drop some three-in-one light oil in the hole and rotate with the crank, repeat several times.  This will help keep that crank shaft lubricated and free turning.

The camper jack exterior paint is maintained by using automotive liquid wax to the painted surfaces at least twice a year.  This keeps the paint looking good and keeps the rock chip spots from rusting.  It also cleans up any rust stain that might be on the leg.  Don also recommended extending the camper jack leg all the way and applying automotive liquid wax to the inner and outer tubes of the jack.

If you get black residue coming out of your jacks, that’s okay, just wipe it off with a soapy rag.  It’s from the crank socket and happens after you oil your jacks.

Don strongly recommended storing a truck camper with the weight off the jacks by using a support system under the camper to carry the weight of the camper.  He also suggested storing the jacks so that they are out of the rain, if possible.

If you experience problems with your motor drive assembly, Happijac also offers a repair service.  For $59.95, Happijac will service your motor head assembly and tighten the clutch back to factory specifications.  Call for a Return Merchandise Authorization (RMA) number. 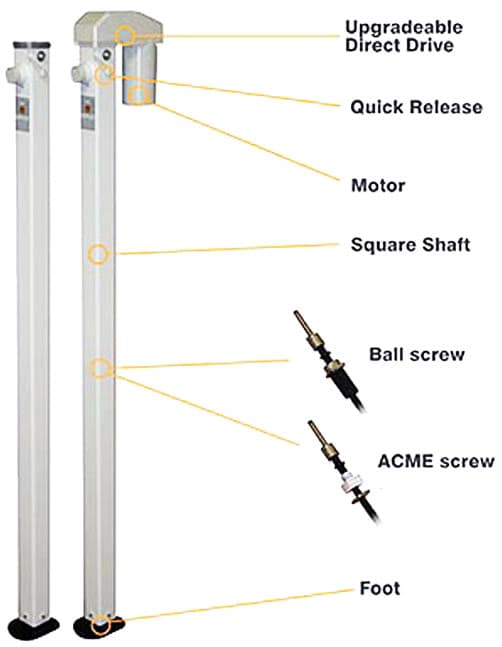