After our first meeting with Northwood Manufacturing’s new CEO, Jim Jones, and COO, Ward King, we were ready to see how Northwood’s Arctic Fox production line was doing.  So what did we find?  Honestly, not much had changed.  How could a company go through a major leadership change and recession and stay so firmly on course?

When we put this question to Jim and Ward or any other team member at Northwood their answers were always the same; Ron Nash, Northwood Manufacturing’s Founder and President, was so clear with his vision and direction for Northwood Manufacturing that there was never any doubt about what each team member, no matter their position at the company, needed to do in his absence.  Ron had shown them the way to success and they continue to follow it to this day.

CENTER: This is a close up of freshly completed 2011 Arctic Fox 992 truck campers emerging from the production line building.  Note the new 2011 graphics designed by Rich Zinzer, Northwood Manufacturing’s graphics mastermind.  If you look closely in the lower right hand corner of the front graphic, you’ll see a hidden fox.

RIGHT: As Arctic Fox campers come off the production line, they are hauled to a storage yard where they wait for a third and final quality control screening.  The storage yard had about forty truck campers waiting for delivery to truck camper dealerships.  Doug Karr, Northwood’s resident truck camper expert and our guide during our visit to Northwood, reported that every camper in inventory was already sold to an Arctic Fox dealer.

RIGHT: As the welding team completes the frames, another team cuts the foam insulation and places it inside the frames prior to lamination.  Here Mykel Hansell uses a hot wire to precisely cut a half-dozen foam insulation sheets at once.

Across from where the welding and foam insulation teams are working, Northwood’s lamination team runs panels through a reactive hot melt applicator, assembles the walls, and pushes them through a pinch roller.

LEFT: Once the walls have been laminated, Randy Aldrich picks them up with a ceiling mounted crane and gently places them onto Northwood Manufacturing’s CNC routing table.  There the wall perimeters, windows, access doors, and slide-outs are precisely routed.

CENTER: Here is a cross section from one of the CNC cut wall sections.  From left to right on the cross section you can see the fiberglass exterior, luan backing, foam insulation, and inside panel.

RIGHT: CNC routed walls are then brought to the assembly line for production.  If you look closely, you can see the aluminum framing and cut out windows and access doors.

CENTER: Before a basement is turned over and for the production line, a layer of insulation is placed into the floor of the camper.  After installing the insulation, Dave Grashoff installed the exterior floor paneling.

RIGHT: Slide-out mechanisms are installed early on the production line at Northwood.  We observed Robert Gardener install the Power Gear electric rack and pinion slide-out mechanisms for a 990S.  He carefully measured and re-measured during the install to ensure smooth slide operation.

LEFT: With the basement completed and the laminated and CNC routed walls installed, the aluminum framed front nose walls are screwed into place.  As Jeremy Shankel was attaching the front nose walls, other team members were installing the interior cabinetry and appliances.

At the end of the Arctic Fox production line, there are two rigorous layers of quality control.  The first layer is called squawk.  We asked quite a few people at Northwood why it’s called squawk and the only reason we were given is that the red tape used during squawk is called squawking tape.

On the Arctic Fox line, Emery Ferguson is responsible for the squawking.  He inspects each and every camper as it comes down the line from top to bottom, nose to rear bumper, inside and out.  He even squawks the roof.

We followed Emery as he squawked a 2011 Arctic Fox 992.  He could instantly see things that took us a few moments to focus on.  For example, he spotted an air bubble in the exterior graphics and a spot where a screw was breaking a seal inside a compartment.  Out came the red tape and these issues were squawked.

Just behind Emery, a squawk team finds his red squawking tape and fixes every issue he’s found.  In the right photograph, Bryon Wiley addresses a blemish on the filon and puts the completed squawk tape on his leg.  Evidently this is the latest fashion on the Arctic Fox production line.

Before a new Arctic Fox truck camper sees it’s first rays of sunlight, Mick Pickler, Northwood’s Camper Production Manager, walks into the unit, shuts the door and turns off all the lights.  In the dark, he runs a flashlight along the walls and other surfaces looking for any imperfections.  When he sees something he doesn’t like, out comes the red squawking tape.  Of course Mick also looks over the interior and exterior of the camper with the lights on, again looking for anything that doesn’t measure up to Northwood’s quality control standards.

This second level of quality control at Northwood is called a buy.  Essentially, a buy means Mick is putting himself in the position of a customer who’s going to purchase the camper.  As Mick told us, “If I’m going to buy this camper, I want it to be perfect”.  Again the squawking team follows Mick and addresses everything he’s found. 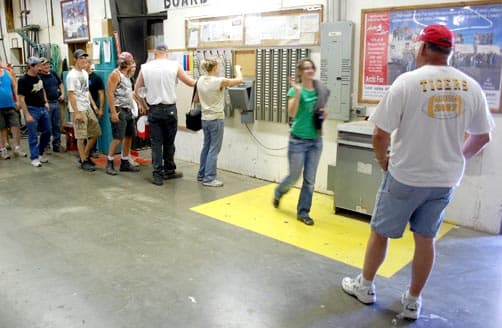 We’ve been in a lot of truck camper factories but we’ve never quite seen anything like this.  Everyday, Mick stands at the exit where the production line workers leave and thanks each and every one of them for their work that day.  He knows all of their names and adds a friendly, “Have a good one Joe” or, “See you in the morning Sue” with his thanks.  The workers wave and smile as they clock out for the night.

Mick explained that this is an important part of the culture at Northwood and a direct reflection of the respect Ron Nash wants his employees to be treated with.  Mick also strongly believes that Northwood’s culture of respect results in higher quality truck campers.

LEFT: Jason begins his inspections with a Sealtech test.  Essentially, a Sealtech test draws outside air into a truck camper through a roof vent and creates a positive interior pressure in the camper.  The difference in air pressure comes out through any imperfections in a camper’s exterior seals.  In this photograph, Jason is installing the Sealtech machine to begin the test.

CENTER: With the Sealtech machine turned on and all the windows and door closed, soapy water is then sprayed onto the exterior seals.  If there’s a break in the seals, the soapy water bubbles show up exactly where the seal break is.

RIGHT: On the camper Jason was testing during our visit, he found a break in the seal around plate where the jacks plug into the camper’s electrical system.  This seal break was almost invisible to the naked eye but, using the Sealtech test, it was easy to identify and fix by resealing around the plate.

LEFT AND CENTER: Jason also goes through a battery of tests on the camper’s electrical, gas, and plumbing systems.  In these two photographs, he’s testing the plumbing and gas systems by putting both systems under pressure and making sure there’s no loss of pressure over time.  This test ensures that Arctic Fox campers don’t leave the factory with a holding tank, plumbing, or gas line leak.

LEFT: While the CO2 levels are being measured, Jason will look over all of the cabinetry and inspect for anything that doesn’t look right.  Mind you these campers have already been through the squawk and buy levels of quality control so he’s really being picky at this point.  Most of what he found we couldn’t even see until he showed us.

CENTER: Jason also looks over the exterior of every camper looking for similarly small issues.  We had to laugh when he recaulked a seal on one side of the camper and then had to recaulk the seal on the other side of the camper because he wanted them to look the same.  Jason admitted to being a bit obsessed with quality, but who are we to complain?

RIGHT: As he completes the two-hour quality control inspection, Jason initials a check list which includes the Sealtech test, water test, flood and flow test, gas test, electrical function test, appliance test, and camper function test.  By the time he was done we couldn’t think of anything he hadn’t looked at or tested.  We were impressed. 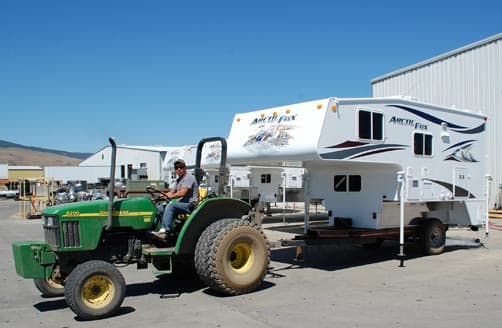 Once Jason had completed his inspection, the campers are tagged with a green dot and pulled by tractor to the distribution lot.  There the campers will be picked up by Northwood’s own delivery company and hauled to dealers across the United States and Canada.  In this photograph you can see Levi Cochran moving a camper Jason recently finished.

As consumers, we tend to focus on the aesthetics of a truck camper.  We look at the floor plan, the exterior graphics, the interior fabric colors, and the style of the cabinetry.  We research the size of the holding tanks, the weight of the campers, and size of the slide-outs.  And we always look at price.

While these factors are certainly important, none of them play into another very important consideration, quality.  As a company, Northwood Manufacturing has embraced the concept that quality control is the key to building better products and winning your business.  Based on how many campers we saw coming down their production line and out the door, we’d have to say they’re on to something.