Truck Camper Magazine visits the Hallmark RV factory in Fort Lupton, Colorado and watches not one, not two, but three brand new Hallmarks hit the open road to adventure.

In July of 2007, we walked into Hallmark RV to begin our very first official factory tour as a magazine.  We were barely six-months into launching TCM and eager to learn as much as possible about Hallmark’s team, manufacturing process, and pop-up campers.  Hallmark welcomed us like family and gave us free and independent access to their entire manufacturing facility.

Three years later, we returned to Hallmark RV a little older, and a lot wiser.  Once again, we were welcomed as family and given total access to their facility.  But what’s this?  The Hallmark RV’s facility has changed.  There’s a new front door.  Let’s walk in and see what else is new.

During our last visit in 2007, Hallmark was just starting to build their new offices and showroom.  At that time, the whole office staff was working out of an office trailer at the front of the building and the showroom was outside in front of the building.  To say that the new addition is an improvement would be a gross understatement.

Not only does the office team now have many times more room to work, but they also have space to display three or four Hallmark campers inside.  During our visit, Hallmark had a Nepal, Guanella, and Cuchara in the climate controlled showroom plugged in with their LED lights on and ready for customers.  In a place with weather as volatile as Colorado, this is an oasis.

Also in the showroom, Bill and Debbie Ward’s dog, Hunter, was taking a long nap.  Just above Hunter are dozens and dozens of thank you notes from appreciate customers.  More customer thank you notes continue on the far wall.  The showroom is also decorated with photographs of Hallmark truck campers throughout the years in some of the most amazing places on earth.  If you visit Hallmark, take a few minutes to walk around and enjoy the notes and pictures.  They’re a lot of fun.

After admiring the new offices and showroom, we visited Oscar Garza, Hallmark RV’s cabinet maker.  Oscar told us that he builds all of the cabinet doors, drawers, and cabinetry for Hallmark campers from scratch.  That last detail caught our attention because many RV manufacturers purchase their cabinet doors and drawers from outside vendors.  Oscar was very proud to show us the raw oak, pine, and birch wood that he uses to build all of Hallmark RV’s cabinetry.

In the above photographs, you see Oscar building and installing the microwave frames to be inserted into Hallmark’s composite overhead cabinetry.  We asked Oscar how he felt about the composite cabinets as a wood cabinet maker and he was quick to point out that the composite cabinets were significantly lighter in weight than their wood predecessors and served their purpose well.  Then he pulled out a complete wood cabinet manufactured in the old style for comparison.  And that’s when Oscar gave me an idea.

Hallmark has a set of portable racing scales in their showroom for weighing their campers and for checking what a camper weighs once a customer has added options.  We really like these portable scales because they make it relatively easy to weigh campers and we’ve found them to be incredibly accurate. 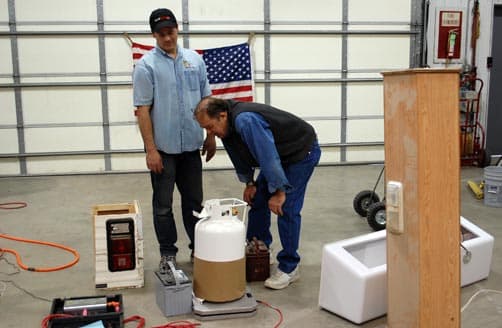 All this weighing got Matt and his father Bill excited to find out what the different batteries laying around the service bay weighed.  As only father and sons can do, they gave each other a hard time about what battery would weigh what and put battery after battery on the scale.  Then Bill started putting propane tanks on the scale.  I think if the phone hadn’t rang, Bill and Matt would still be there putting things on the scale.

The method by which Hallmark manufactures their roofs is a Hallmark secret.  What we can tell you is that the carbon fiber part of the roof is manufactured by C.F. Maier in Colorado, the same company that manufactures Hallmark’s molded fiberglass exterior panels.  Once the carbon fiber roofs are delivered to Hallmark, David Hastmen begins the top secret process of assembling the roof.  Once the roof is completed and vacuum bonded, David installs the soft wall and prepares the roof and soft wall assembly for the production line.

The production team at Hallmark was busy finishing three sold campers that were at various stages of completion.  One of the campers had a delivery date posted on its nose of “ASAP”.  The sense of urgency was keeping the team on task and moving.

LEFT AND CENTER: Andy Zwicker was one of two new Hallmark RV hires we met during our visit.  Andy was been at Hallmark RV for four months and was installing interior cabinetry and interior components.  Mike Hastman worked with Andy to install a side window.

RIGHT: Two campers down from where Andy and Mike were working, Wayne Vue, Hallmark’s other new hire, was working on exterior final finishing on a nearly completed K2.

LEFT: Jim Elwell was installing the exterior fiberglass panel on a Hallmark LaVeta.  The LaVeta is Hallmark’s smallest camper and debuted in Truck Camper Magazine in March of 2009.

CENTER: Hallmark’s facility gives them a lot of room to spread out the various production stations.  As we walked around the factory, we met Bill Mitchell assembling camper soft walls.

RIGHT:  Brothers Andy and Matt Ward mark the position for a bike rack they were installing on a customer’s new Hallmark.  Nice hat, Matt! 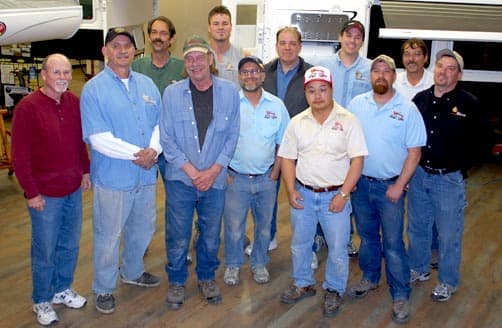 At the end of the day on Friday, Jody asked us to assemble the production team for a group photo.  When we finally got them all to stop laughing and carrying on, we took a few photos in the new showroom.  These guys were definitely ready for the weekend.

On Saturday, we were fortunate to watch not one, not two, but three brand new Hallmark truck campers being loaded and delivered to their new owners.  In the above three photos you see the Hallmark team preparing the trucks and loading the campers.

Andy Ward installed the tie-down systems and airbags.  Once everything was installed and ready on a customer’s truck, Andy got into the drivers seat and loaded the brand new Hallmark with the help of Jody Bolin and Andy Zwicker.

All three new Hallmark owners were very excited about their new campers.  It was great fun watching their trucks get loaded with the Hallmark campers for the first time.

LEFT: Victor and Becky Carrillo from Albuquerque, New Mexico purchased a 2010 Hallmark Guanella for their Chevy 1500.

RIGHT: Lucy and Art Smythe from Basalt, Colorado purchased a 2010 Hallmark Milner LX (for short beds) and a 2006 Toyota Tundra.

We would be remiss if we didn’t mention another significant change under way at Hallmark RV.  Under the creative direction of Matt Ward and his brother Andy, new camper design and development is rapidly moving towards emerging off-the-grid products and technologies to further extended the off-road and overland capabilities of Hallmark’s pop-up campers.  These technologies include extensive use of LED lighting, portable 12-volt refrigerators, built in cassette toilets, and solar power.

This direction was first seen in Hallmark’s K2 last year and most recently in the Nepal.  Matt and Andy took both models with their off-road modified trucks to the Overland Expo this past April.  Based on the reception and enthusiasm these two campers have generated, Hallmark’s push towards off-the-grid products and technologies has just begun.

The idea that Hallmark campers can now thrive on more challenging off-road terrain for longer periods of time is a great metaphor for where the company has been these past eighteen months or so.  Hallmark has navigated their company through the challenging economy and come out the other side strong and ready to grow into new areas.  Are Hallmark campers overland vehicles?  You bet.  And so is the company.