As custom aluminum frame pop-up camper manufacturers, Coyote RV takes on some very challenging camper builds.  If there’s a vehicle with a truck bed, or something like a truck bed, Robby Rowe, Co-Owner of Coyote RV, has probably made a camper for it.  And as you’re about to discover, Robby also makes campers for vehicles that don’t have truck beds.

In the two days we spent with Coyote RV, we saw several projects moving along.  The first was a custom Phoenix camper for a standard pickup truck.  The second was a “top secret” custom camper for a vehicle we never would have considered a truck camper option.  And the third was so custom, so wild, and so crazy you’ll just have to see it to believe it.

If we learned anything during our visit, we learned that you never know what you’re going to find at Coyote RV.  And just when you think you know what’s up, Robby has another surprise waiting for you.  But before we get to all the interesting projects underway at Coyote RV, we might have to call the police… 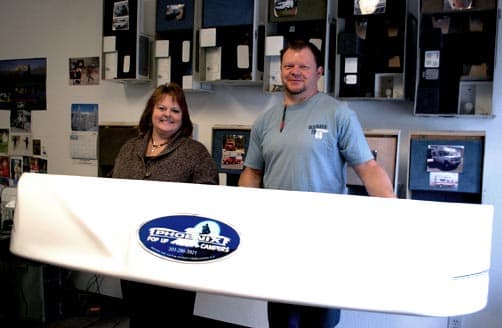 We arrived at Coyote RV just after dark on a Sunday evening for our visit with Robby and Cari Rowe, Owners of Coyote RV, the next day.  And that’s when a fast moving blur inside the building caught our eye.  We had just hung up our cell phone with Cari and knew they weren’t at the shop.  So did we have a situation here?  What’s the number for 911?

A hurried call back to Cari quickly put our concerns at ease.  Jeff Olson, a Coyote RV team member, was working late on a Phoenix aluminum frame.  Two minutes later, Jeff came out and we all had a good laugh.  Jeff works at Coyote RV on the weekends and after hours when he’s not in graduate school working on his MBA.  MBA by day, camper frame guy by night.

Since Jeff would only be there that evening during our visit, we came in and took a few photographs as he cut aluminum and began to weld a new frame.  After our laughs and conversation, Angela and I went back to our camper to sleep and Jeff worked through the night.  In the morning, Jeff was gone and there were two completed aluminum side wall frames waiting for Robby and the team.  It was like Santa had visited and put two frames under the Coyote RV tree.  Thanks Santa Jeff.

On Monday morning, we met Ryan Berry, Robby’s assistant.  Ryan was getting ready to build cabinet drawers.  In between when Ryan and Robby were cutting their aluminum and wood, the banter between these two guys was hysterical.  Let’s just say that Phoenix campers are born into a fun, easy going environment.  Robby and Ryan certainly get the work done, but they enjoy themselves too.

During our visit, Robby was working on what he called a “top secret” project.  Since it’s about a month since we visited, we can now share with you that he was working on a prototype design template for a Chevy Avalanche.

While Robby worked on the “top secret” Avalanche prototype template, we asked him if he enjoyed the challenge of building custom campers for non-traditional trucks.  Immediately he smiled and said, “Oh yeah.  What fun would it be to build for regular trucks?  That’s not hard.”

When the Avalanche camper becomes a reality, Robby and Cari promised to send us photos.  For now it remains Robby’s “top secret” camper.  Don’t tell anyone.

When we visited Coyote RV in 2007, we didn’t have the opportunity to see the inside of a completed Phoenix Camper.  For our visit three years later, Robby and Cari made sure there was a Phoenix Camper outside for us to see and we took plenty of photographs to share with you.

If it’s possible to have buzz at a company of four, the buzz at Coyote RV was all about Robby’s new Zebra camper.  There was nothing more than a drawing of this camper to look at on day one of our visit, but Robby had plans.  At about 4:00pm in the afternoon Robby announced, “I’ve got things to do at home”, and left for the day.  He was determined to finish the Zebra and bring it in for us to see.

You could almost sheer the pre-zebra buzz the next morning.  And when he pulled up all black and white and wavy striped, we were in shock.  Is Robby Rowe a Colorado Man of Mystery?  If this camper build is any indication, the answer is, “Yeah, baby, yeah!”

It turns out that Robby, and his father before him, have been building campers like the Zebra for many years.  This particular camper has been rolling around in Robby mind for some time and he was very excited to see it completed.

After picking our jaws off the floor, we took some exterior photos of the Zebra and stepped inside Robby’s creation.  This is definitely a tour de force of Robby Rowe’s capability and creativity as a camper builder.  Being in the Zebra also make us want to hit some crazy off-road destinations, and stay there.  Nice work Robby.

We’re absolutely sure that the next time we visit Coyote RV we’ll find something completely different.  In an industry founded on production lines of standardized products, Coyote RV has charted their own custom course.  Rest assured that if you have a custom aluminum truck camper in mind, Robby will not only build it for you, but will have a most excellent time building it for you.  Rock on Robby.  And keep us guessing.

For more information about Coyote RV, visit their website at phoenixpopup.com.