Here’s the plan; head south from San Francisco in a Palomino pop-up truck camper, get married in Costa Rica, and then explore the Pan-American Highway.  Meet the Pribbenos! 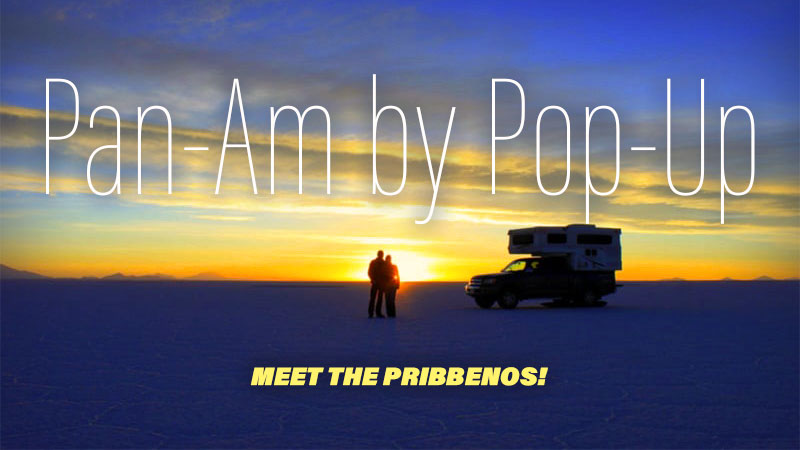 Most folks get married in a church, go on a short honeymoon, and then begin the tried and true married life plan; house, kids, work, work some more, and then retire.  Not the Pribbenos.  At least, not so far.

Rather than keeping to the normal life path, the Pribbenos charted a daring course.  Together, they planned the trip of their dreams on the Pan-American Highway through Mexico, Central America, and South America.  On the way, they would be married at sunset on the beach in Costa Rica.  Their honeymoon would be an adventure the likes of which most people could barely imagine, much less summon the courage to try. 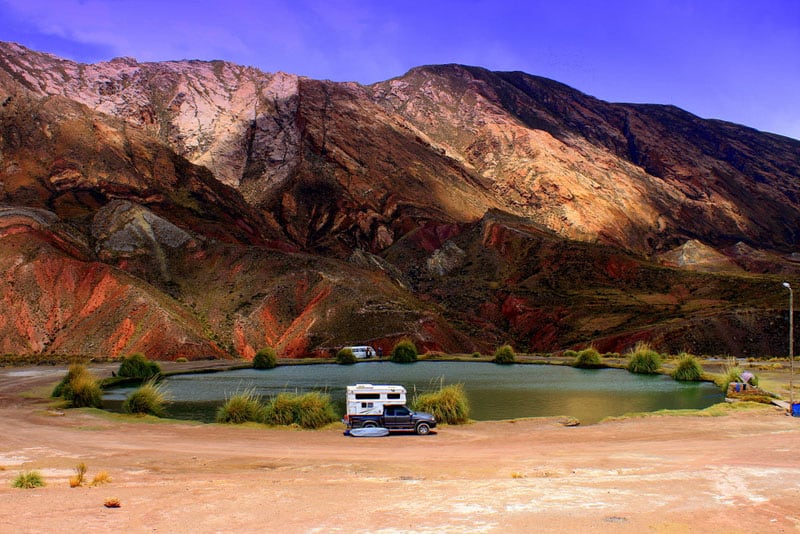 Above: Camped out at Inca Del Oro, Bolivia

Did everything work out according to their plans?  Did they have any problems with safety or breakdowns?  For those answers, and more, we interviewed Logan and Brianna. 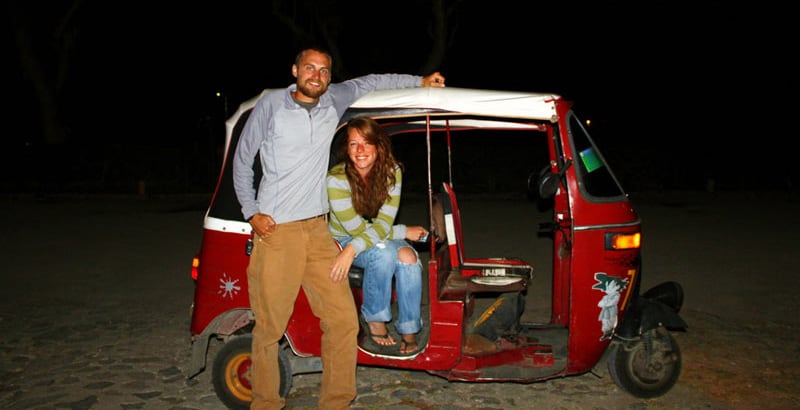 Above: Riding a Tuk Tuk back to camp in Panajachel, Guatemala

Tell us about your route.

Logan: We went south from San Francisco, California to Patagonia, Argentina in our camper covering about 13,000 miles.  We immersed ourselves in totally foreign cultures, and tested the limits of how much our minds could absorb. 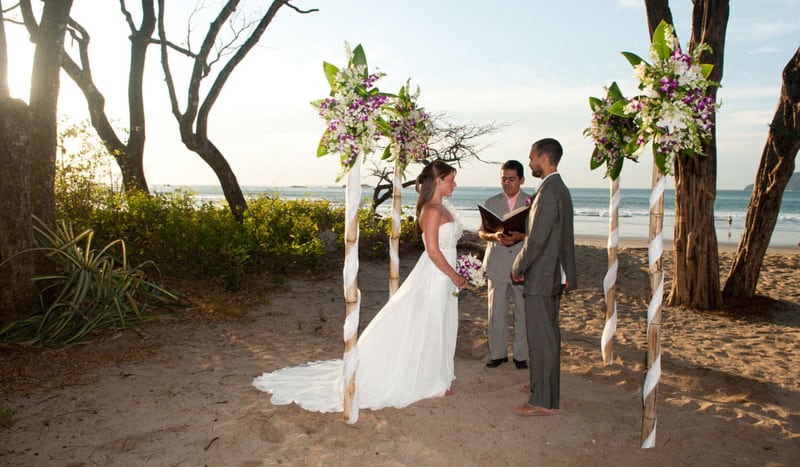 Above: Brianna and Logan’s wedding in Costa Rica

Brianna: We took advantage of every opportunity; hiking volcanoes in Guatemala, ascending peaks in Peru, kayaking the Sea of Cortez.  But perhaps more exciting than all of those was our wedding.  We said our “I dos” in an intimate ceremony at sunset on Playa Langosta, Costa Rica.

Wow.  Congratulations!  Where did the idea for all of this come from?

Brianna: It wasn’t one of those light bulb moments.  It started as a wild dream and we slowly came to accept it as a possibility.  There were many little instances that pushed us toward traveling down the Pan-American Highway.  Ultimately our circumstances (young, mortgage-free, employed, without kids) convinced us that if there was going to be a “someday”, it must be now.

“It started as a wild dream and we slowly came to accept it as a possibility.”

Logan: We both had a yearning to do something big.  Honestly, just driving south was the coolest thing we could come up with.  It was a goal we could rally behind. 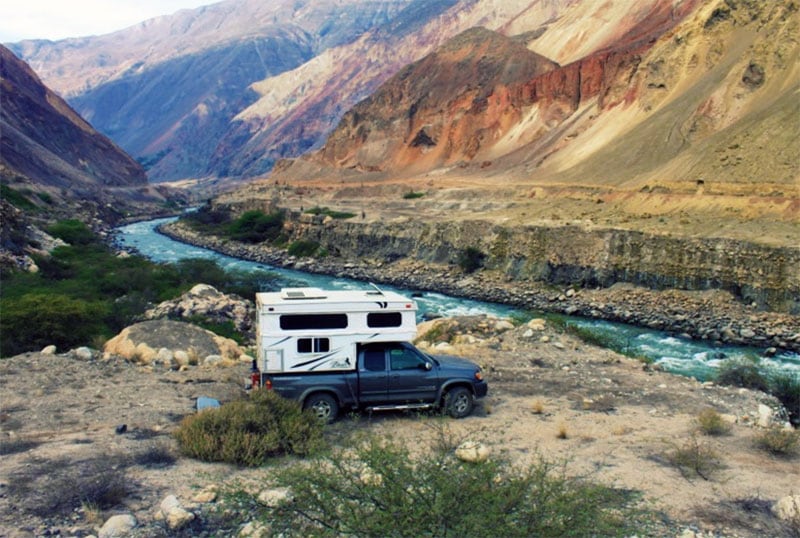 How did you go about planning a trip of this magnitude?

Logan: We planned a lot.  By the time we made it to mainland Mexico, our plans all went out the window.  The things you need to plan for, such as a FARC uprising or a union strike in Bolivia, cannot be planned for in advance from your living room.  You hear about them from other travelers.

Brianna: We planned country by country, often day by day.  For example, we planned Bolivia while in Peru.  This is the way to go for long-term travel. 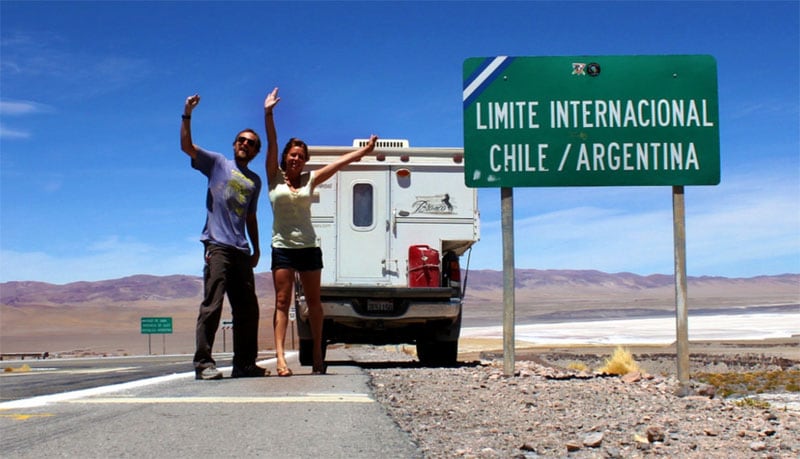 Above: The border of Chile and Argentina

Before going on the trip, what did you need to figure out (passports, vaccinations, shipping, border crossings, etc.)?

Logan: Research for the truck and truck camper seemed to eat away my evenings.  It was probably overkill, but with the minimal amount of problems we’ve had, I can’t complain.

Brianna: The details were surprisingly easy to work out.  One conversation with our doctor and about twenty pokes in the arm later, we were good to go.  Visas and passports are a cinch for US citizens.  Shipping around the Darien Gap and Central America border crossings were a whole different story, but with patience, and a smile, we got through them all without a scratch or a bribe. 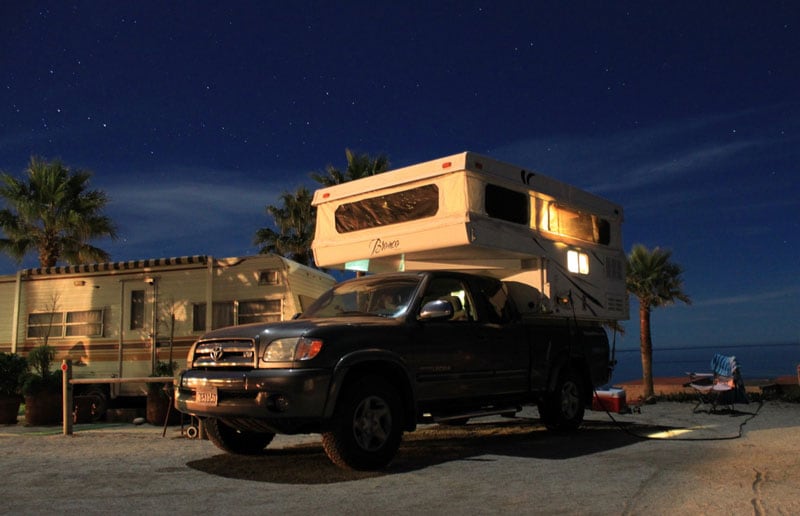 Above: Nightscape in Erindira, Baja Mexico

A lot of people are probably wondering how you paid for a trip of this scale.   Please share your secret.

Brianna: No secret necessary.  We went about it the old fashioned way.  We saved!

Logan: While in San Francisco, we scaled down our lifestyle and pocketed the savings.   In place of Napa Valley trips, we took camping trips (sometimes to Napa Valley!).  From the campgrounds, to the gas and beer, long term travel is shockingly cheap.  We spend less than $75 per day on lodging, food, entertainment, etc.  In Latin America, that translates roughly to living like royalty.

Why did you get a truck camper (and not another form of RV) for a trip to Central and South America?

Brianna: Our first visions of the trip had us driving south in a fully decked out, rescue orange, 4×4 Sportsmobile, complete with chrome ladder rack.  Budgeting came next and we realized that we could get more space and more flexibility for a fraction of the cost with a four-wheel drive truck and truck camper. 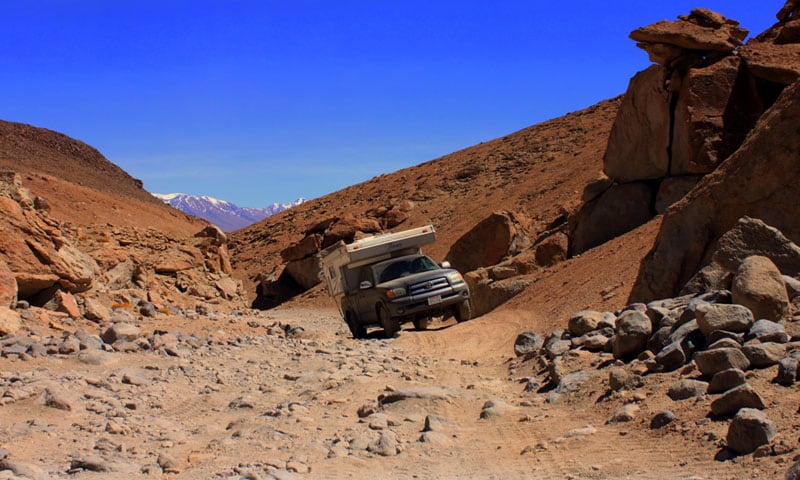 Logan: We can confidently say that we made the right decision.  The truck took us everywhere we wanted to go and the camper offered us the perfect amount of amenities.  On both ends of the extreme, the heat and humidity in Central America, and the freezing cold on the Bolivian Altiplano, we relished having an “inside” place to brew a cup of hot coffee or enjoy a cold beer from the refrigerator. 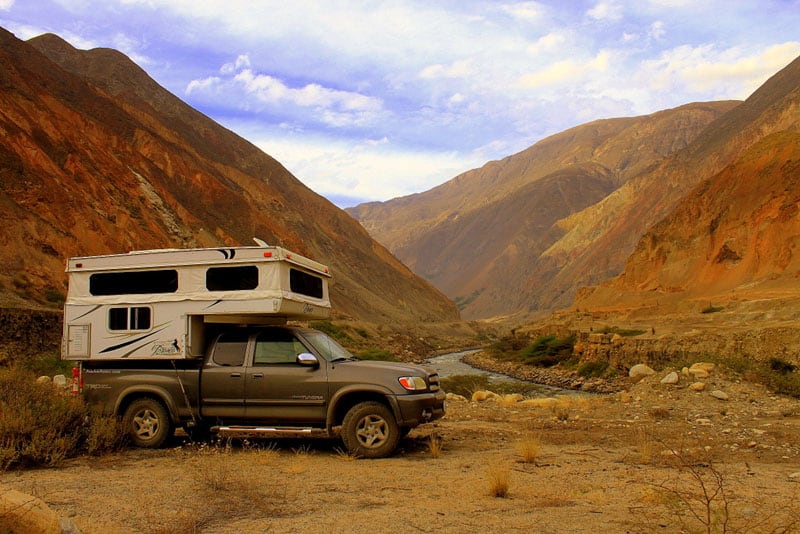 Did you have to do anything special to your rig prior to the trip?

Logan: We kept it simple.  Before the Tundra I had a Jeep Wrangler that I decked out to tackle any trail the US could throw at her.  It had custom bumpers, tire carriers, 33-inch tires, and even custom axles.  For this trip we wanted to equip quick and focus on the trip ahead. Plus we found our upgrade budget was eaten up by maintenance costs, and upgrades with less visual appeal such as new stock-sized BFG tires and enlarged front brakes. 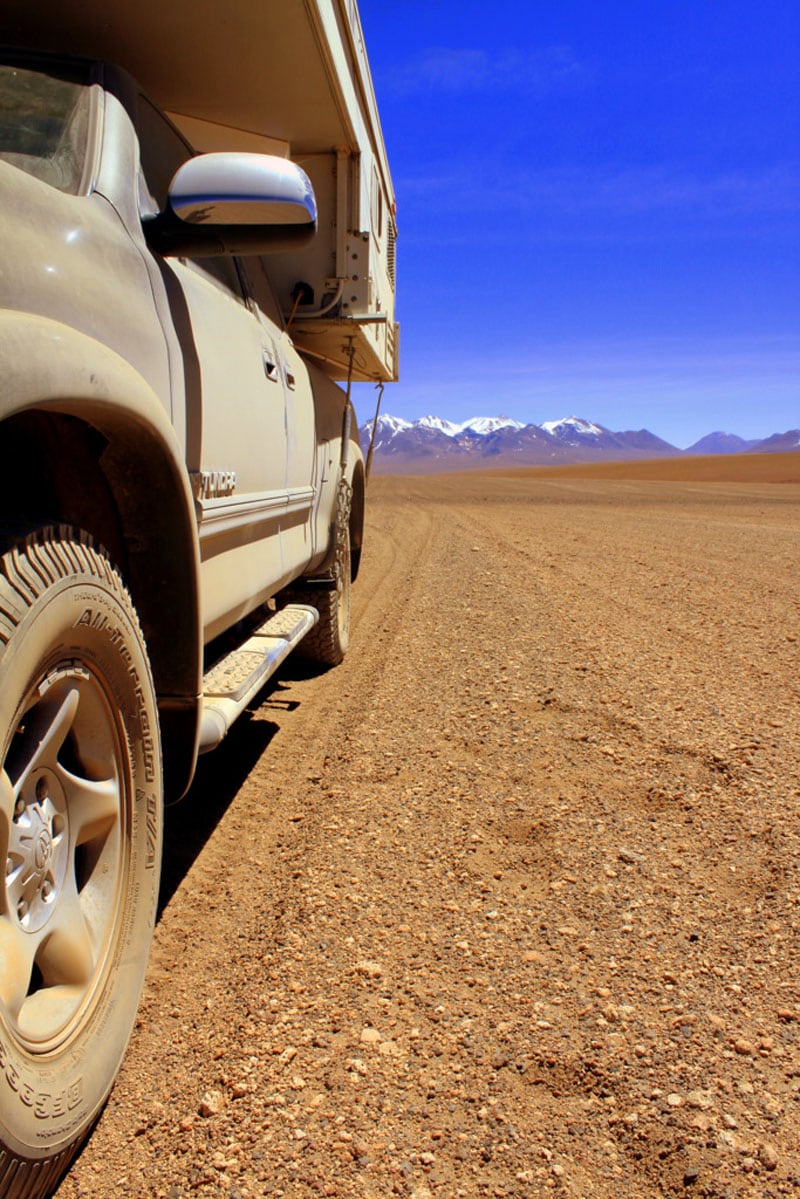 How did you plan the route you were going to take?

Brianna: We only mapped a rough estimation of the route and knew it would fluctuate as we traveled.  Probably the best part of the trip was meeting other overlanders who had notebooks filled with their favorite spots.  These are places you will not find online or in the guidebooks.

Logan: We did have some highlights that have maintained a permanent spot on our map such as Baja California, the beaches of Costa Rica, the Cordillera Blanca in Peru, Machu Picchu, the salt flats of Bolivia, and, of course, Patagonia. 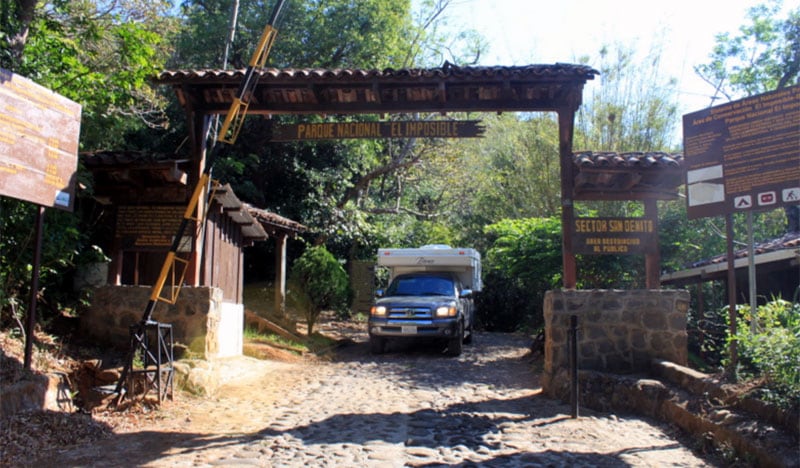 What were some of your favorite places?

Logan: If you want to get “out there” there are no better places than Baja California and Bolivia.  The Baja coast is spectacular and close to home.  Bolivia is one of the few remaining wild countries in the Americas.  We found it to be full of surprises. 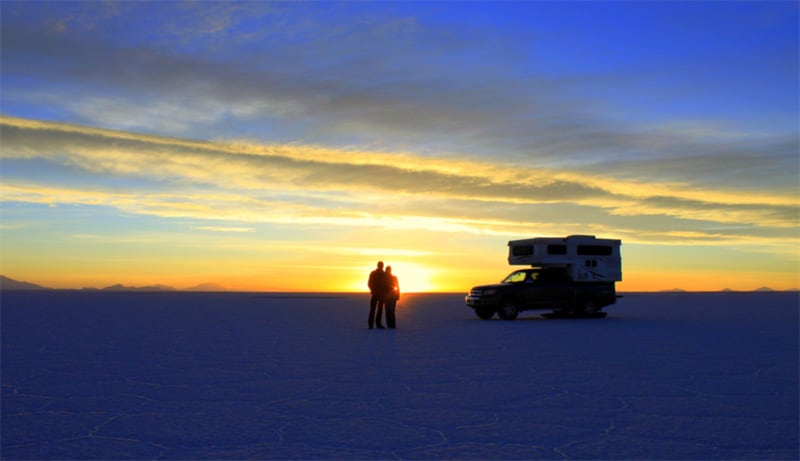 Brianna: The Pacific Coastlines of Mexico, Nicaragua, and Costa Rica were some of my favorites.  The beaches, the beach towns, and the mellow surfer vibe amount to a lifestyle of complete tranquility. 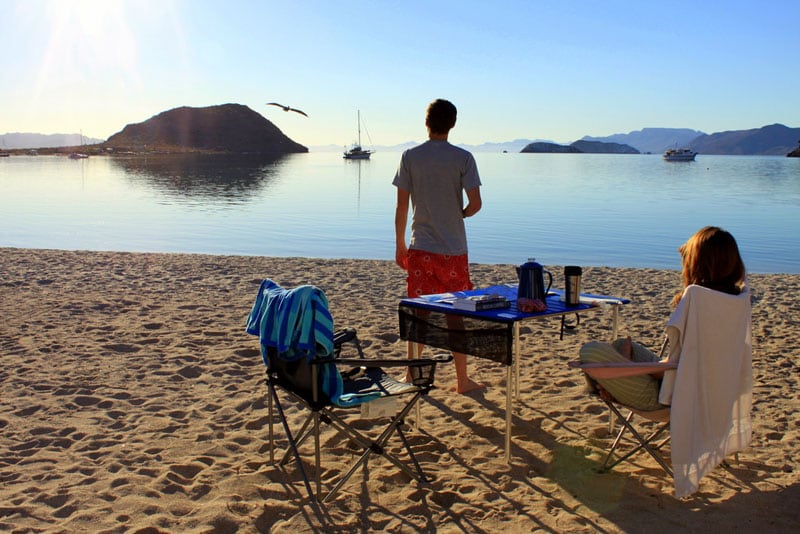 What unexpected challenges did you encounter on the road?

Logan: Cultural immersion.  I’m more of your college football (Go Big Red!), Jack and Coke, home-grown type compared to your typical dread-locked traveler.  And it’s been all Latin America, all the time for almost a year now.  I’ve grown to fully appreciate the experience, but not without a bit of a struggle.

Brianna: In the beginning, I had reservations about leaving my job, abandoning all my worldly possessions, and giving up the easy life.  I hadn’t even opened a 401(k) and I felt I was being terribly irresponsible in choosing to save money only to spend most of it on a year of travel.  Barely a month into the trip, my perspective completely shifted.  In fact, Logan had to remind me of this initial reaction to the journey, because now I can’t imagine my future without adventures like this sprinkled in.

Above: Exploring the beaches in Costa Rica

Was security and personal safety an issue in South America?  How do you find safe places to camp?

Brianna: When we started the trip, we very rarely camped outside of gated campgrounds or hostels.  It wasn’t until we reached South America that we came to realize what a huge mistake that was.  Everyone had warnings and cautionary advice which we carried around with us for far too long.  We worried less and less about security as each day passed.

Logan: We had camping lists from others that traveled before us with organized campgrounds and bush camping opportunities.  But, it was still thrilling to pull off on a dirt road to seek out our own plot of land for the night.  We took precautions.  We never bush camped near cities, and, when we pull off the road, we made sure we were well hidden.   I would love to go back and re-do Mexico and Central America without the burden of irrational fear.

Did you speak the languages that you encountered?

Brianna: I speak Spanish and feel that it’s a requirement to fully appreciate a journey like this one.  You can get by with a few phrases, but you won’t learn much.

“Making even a minimal effort to speak the language opens all kinds of opportunities for learning and sharing.”

Logan: Learning Spanish has been the most difficult undertaking of my adult life.  Every country is different and every territory within every country shows a different take on the language.  Our Mexican flavored Spanglish just didn’t cut it in South America.  There is a lot that I loved about the cultures we encountered.  Because of that, I committed to speaking and understanding their language. 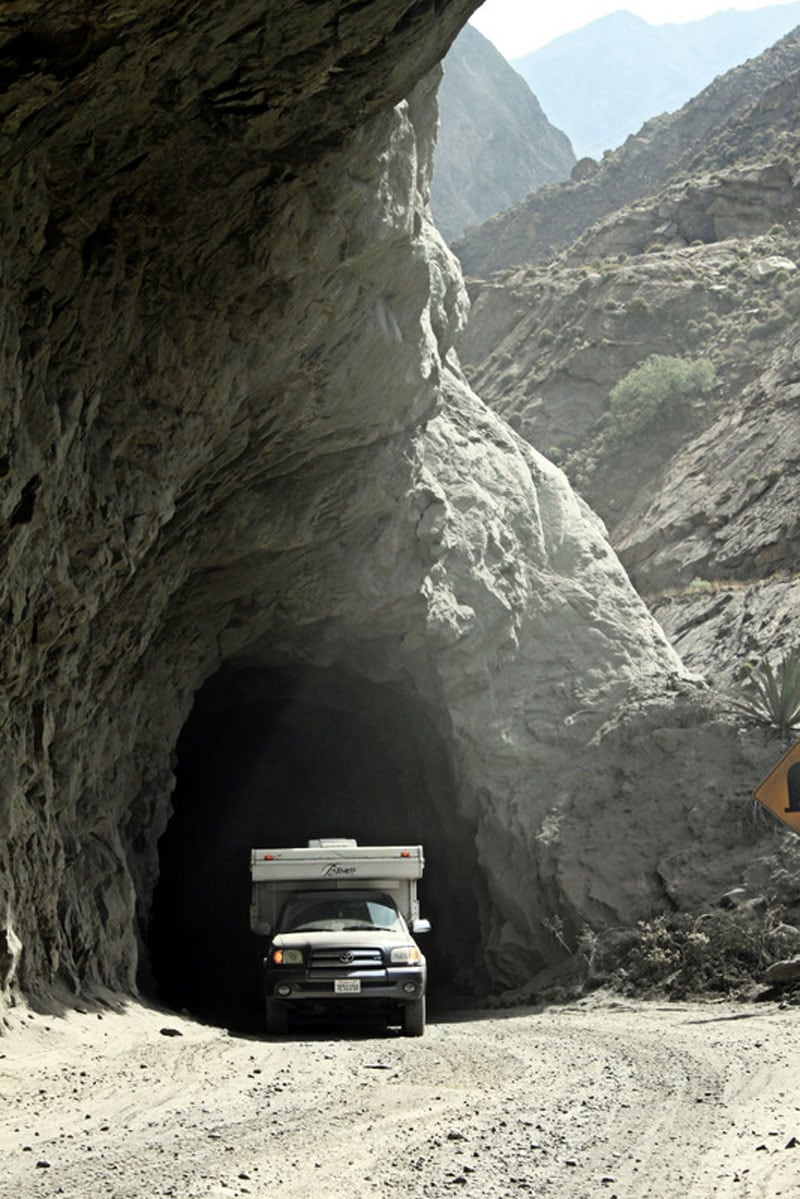 What would you tell yourself if you could go back in time to the very beginning of the trip?

Brianna: Before leaving, we thought we’d have limited access to everything; showers, internet, bathrooms.  They all seemed like precious commodities we wouldn’t have.  I bought an embarrassing supply of “no shower” toiletries that were totally unnecessary.  The reality was, the journey could be as wild as we wanted, or we could be plugged into WIFI and electricity every night.  The conveniences don’t stop at the border.  We found a happy medium. 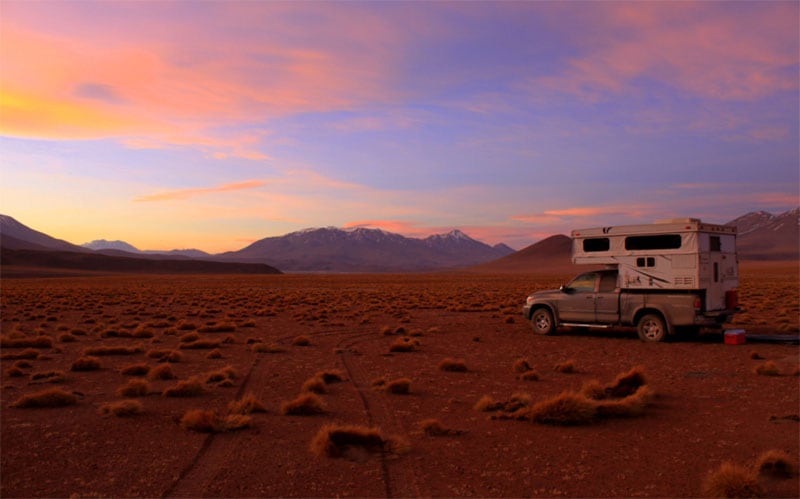 Logan: We met families of seven in fifty-foot RVs on the road!  A trip through the Americas is only as remote as you want it to be.  I would say that it’s important to seek out and only consider advice from people with experience in international overlanding.  Everything else is just noise.

“If I could, I would banish every but and can’t. Anyone can do it. You just have to go.” 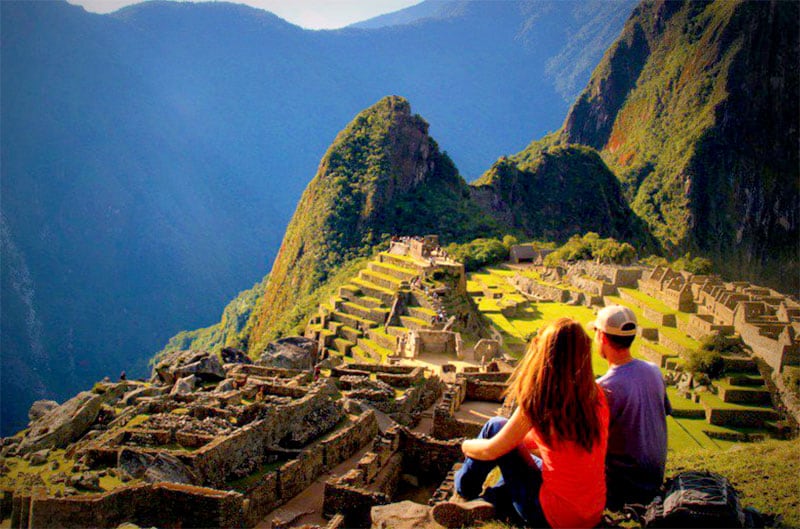 Above: Logan and Brianna at Machu Picchu in Peru

Is there any other advice that you’d like to give people out there who are seriously thinking about taking a trip to Central or South America?

Logan: For every word of encouragement, we received one hundred negative comments questioning everything from the abilities of our truck (your frame will break), the camper (the wood frame will break), and even our ability to survive (you will break!).

A drive axle boot may not be available at the nearest Napa Auto Parts, but you’ll find a guy, who knows a guy, who’s the brother of a guy, and two days later you’ve got everything you need.  I even had a metal sliver embedded in my cornea and getting this removed in Costa Rica was a $50, five minute, painless endeavor.

Brianna: Even the nay-sayers knew what we were doing was special.  From co-workers, to family, to complete strangers, they all get the same familiar glint in their eye.  The possibility is tempting, the dream is strong, there is wanderlust in everyone.  If I could, I would banish every “but” and “can’t”.  Anyone can do it, you just have to go. 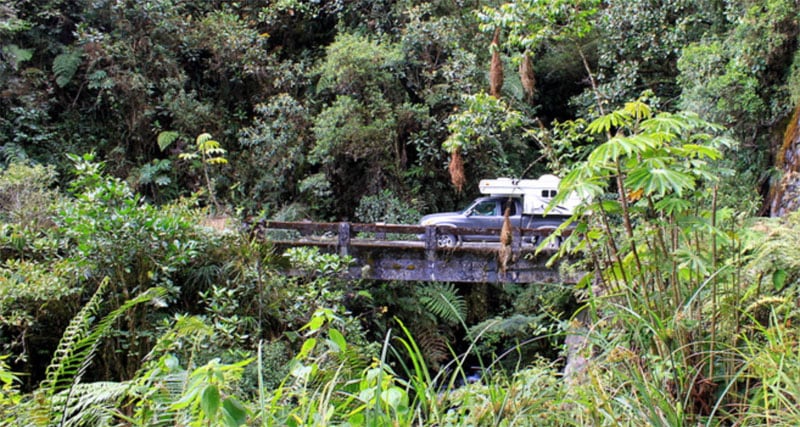