Mark and Anita Rytz of Switzerland share their incredible world travel by BMW motorcycle and Northstar truck camper.  First they sold everything.

The following story was submitted to us by Mark Rytz.  Thank you Mark for contacting us with your amazing story and photography.  We hope to follow your lead someday. 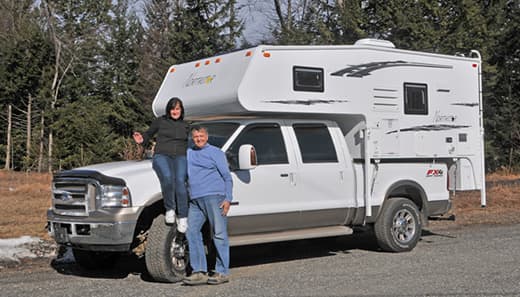 Earth by Motorcycle and Truck Camper
by Mark Rytz

When I was about five years old, my father gave me a pretend coupon and said, “You can use this ticket to travel to Honolulu”.  The next day I took my three-wheel to the train station in Lucerne and boarded the first available train.  It was an express train to Zurich.  When the guard asked me where my mother was, I answered that I was traveling alone.  When he asked me where I wanted to go, I said to Honolulu.  When he asked me if I had a ticket, I showed him my coupon.  At the next stop I was taken off the train and handed over to the police.  They were alarmed that I was missing from my mother.

My wife and I were born in Switzerland and never lived anywhere else.  Before we left Switzerland for our trip we had very good jobs.  My last job was a general purchasing manager at the largest stainless steel producer in the world and Anita was secretary to the local mayor.

We sold our house, our cars, our sailboat, and everything else.  In August 2008, we started our current world tour with a motorcycle.  We want to see with our own eyes how the world looks, and not just from seeing it on television.  The television has stupid shows and a lot of political propaganda.  The world is not as bad as the news agencies and the politicians make it out to be.  On our trip, we want to learn about other cultures, lifestyles, animals, and plants.

Traveling the World by Motorcycle

Our trip started by motorcycle.  Anita and I have traveled together by motorcycle since 1975 and I have traveled on a bike since 1968.  There are so many beautiful places on Earth.  Every continent and every country has its highlights.  It is very difficult to pick favorites, but our preferred regions are Alaska, the Colorado Plateau, Patagonia, Ireland, and, of course, Switzerland.

So far, with the motorcycle, we have visited eighty-two countries, including Siberia, China, Japan, and all countries in Europe and North Africa.  We have been on a motorcycle on every continent, on the highest passes in the Himalayas, in the hottest deserts, and on all shores of the oceans.  On our current world tour, we have visited thirty-eight countries.

If you want to travel for years on the road, then only the best equipment is good enough.  It requires perfect material.  Perfect service is even more important.  We have had Japanese motorcycles and eight BMWs.  It was clear to start this trip with a BMW R1200GS Adventure.  It was the best bike I had owned in forty-three years.

Traveling with a motorcycle is different than traveling by car.  Everything is much more intense, exciting, and beautiful.  You come in contact with people very quickly and can navigate the smallest roads. 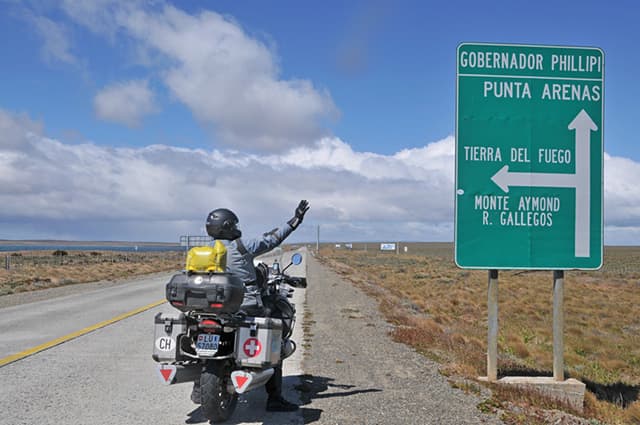 Above: December 2010 not far from our dream in South America

It had been planned from the beginning that we would stop motorcycling in March of 2011 for the Carnival in Rio de Janeiro.  Unfortunately, we had to stop in Tierra del Fuego.  After forty-three years and over 600,000 kilometers, this was the first time that we didn’t have a motorcycle anymore.

We have been on a motorcycle in North America several times and have seen great places.  It was a must in the planning of this world tour that we travel around North America again, specifically the west side of the continent, but this time with a truck camper.  North America and Australia are ideal to travel with a camper; it’s much better than with a motorcycle.

Growing up, neither of us went camping with our families.  As a teenager, I camped with only with a bicycle or a motorcycle.  I had very little money as a student and could not afford hotels, but I wanted to travel.

On our previous trips through North America, we had studied the various classes of campers.  It was clear to us that only a truck camper made sense.  A truck camper has many advantages which corresponds exactly to our needs.  The best part of a truck camper is that we can stop anywhere, anytime.  They are relatively small, agile, and multi-functional. 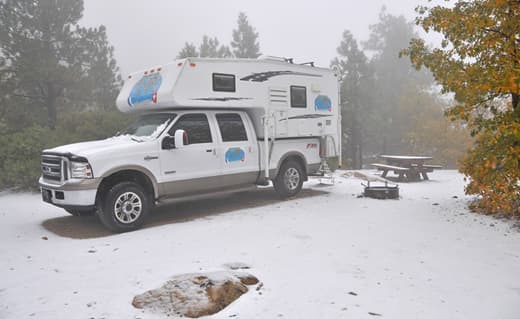 Above: November 4th after a beautiful sunset; snow the next morning

When buying our camper, there were two very important requirements for us that needed to be met.  We did not want a pop-up because we want to travel in very windy and cold regions.  The other requirement was that the truck and camper had to be able to be loaded into a forty-foot shipping container.  So the choice was very limited and the Northstar Laredo made the best impression on us.  Our truck had to be a 2007 or older Ford diesel because in many countries no LSD (low sulfur diesel) is available. 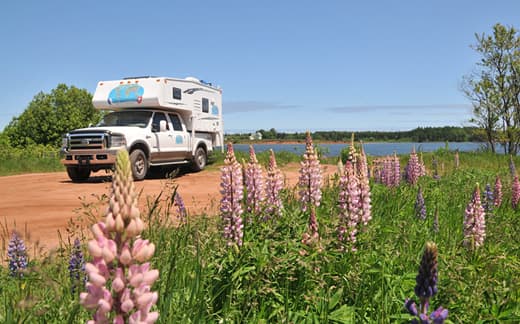 Unfortunately, we did not have experience with truck campers, so we had to rely on the experience of others.  It was very difficult to register the truck.  In addition, we were under time pressure because Anita had booked a flight from Montreal to Switzerland.

While Anita was in Switzerland for four weeks she visited the family the whole time I was in Montreal.  During this time I made some changes on the truck camper and boxes for the wheelhouses of the truck.  Now I can keep the tailgate in its original place.  When Anita got back, we traveled for three months to Nova Scotia, Newfoundland, and Labrador via Toronto and Winnipeg, and then we traveled to Denver.

Above: Traveling west to California

We met Anita’s sister and sister-in-law from Switzerland in Denver and we traveled together to San Francisco. 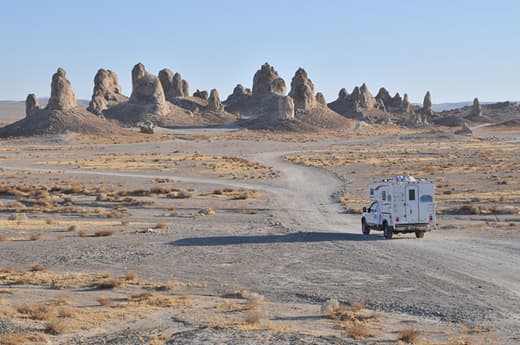 Above: The Pinacles in the Mojave Desert; nice, free and absolute quiet 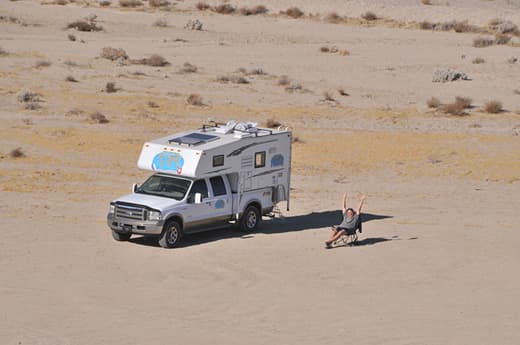 Above: The Pinacles in the Mojave Desert; one week alone 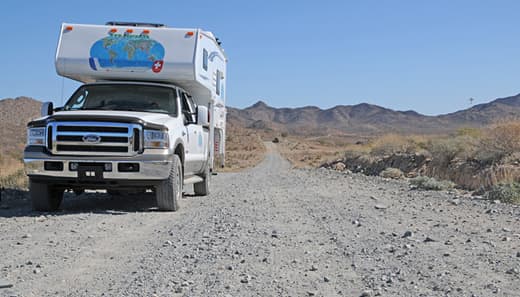 Above: The MEX-5 in the Baja California needs good tires.

There we said our good-byes and then traveled to the Mojave Desert. 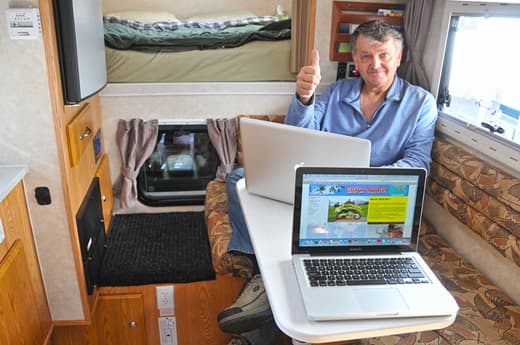 Above: Mark inside their Northstar with their new MacBook Pros

We can not compare our journey with the motorcycle and the camper.  Both have their advantages and disadvantages.  With the bike, we slept in more than 800 different beds and ate at restaurants every day.  With the truck camper, we have our own bed and can cook our own food.  Our truck camper is small, but it has everything we need.  The best part is that we can stay in the most beautiful places, and remain as long as we like.

In May, we will re-enter the United States.  On the way to Alaska, we would like to visit some national parks that we still do not know.  In July, we meet friends in Alaska from Switzerland and Germany.  We will be traveling with them for two weeks through this magnificent region.

When the first frost comes in Anchorage, we will travel to Vancouver along with the frost. From there, we do not know how it will go.  In 2013, we want to go with our truck camper to South Africa, through East Africa, and back home. 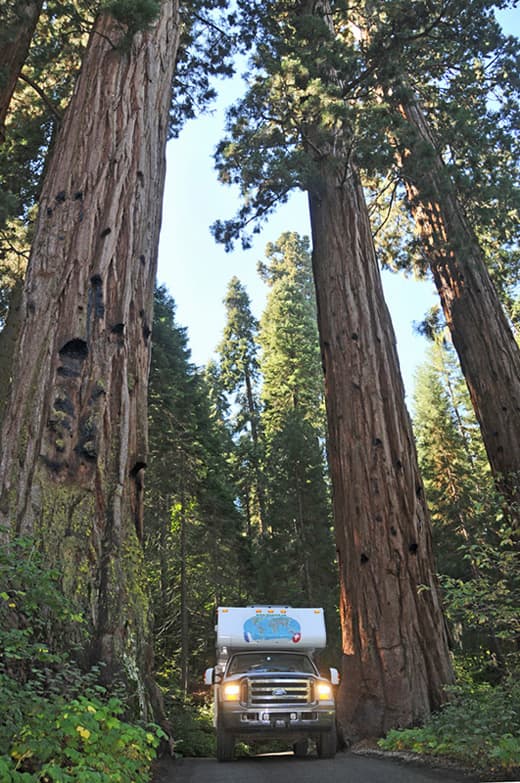 In traveling the past year, we’ve realized that everything needs a lot of electricity.  For dry camping we need solar panels and batteries.  Make sure you have enough solar and batteries.  Before you buy a truck camper, you should be clear about your needs as a camper.

The question is; not as large as possible, but as small as necessary. 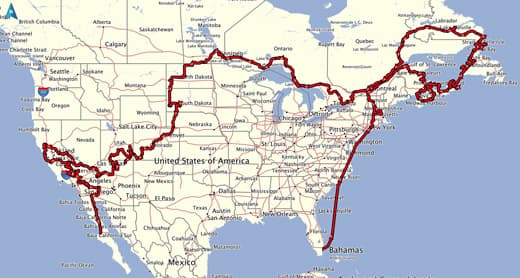 Above: Mark and Anita’s truck camper travels (South America to Florida flying up to New Hampshire where they began).