The Top Shots series will take us to some of the best places to go truck camping from world famous national parks, to hidden gems on BLM lands.  Photographed and written by truck campers, for truck campers, Top Shots will be a treasure chest full of fresh ideas on where to go and what to do in these incredible destinations.  First up for the new Top Shots series is none other than Rocky Mountain National Park.  Take us to the top Todd!

Above: Scenery from inside Rocky Mountain National Park

As some of you already know, I try to take a trip out west every summer for six to eight weeks in my home away from home, my Northstar Arrow truck camper.  I have done this every summer since I got the camper in 2005.  I vowed when I bought it to spend a year just roaming and exploring the national parks; not all at once, but six trips of two months each.  I have made it happen for five summers in a row and then the economy got the best of me.  Real estate has been in the pits in case you haven’t heard!  In 2010 I wasn’t able to go, and I was literally heartbroken.

I was beginning to think my year was in jeopardy and I actually considered the unthinkable, selling my truck camper!  Thankfully things turned around and I was able to complete my dream in 2011.  Not only did I knock out the last two months of the year this past summer but I managed to get a few more weeks in to boot.  I was fortunate enough to spend just over 100 days out this summer; my longest and possibly best trip yet.  I say possibly because my trip to Alaska in 2007 is hard to beat!  Including my six major trips, local camping trips, bluegrass festivals, beach trips, etc; I estimate that I now have close to 450 nights under my belt in the tin can.  Nobody can tell me that I haven’t gotten my money’s worth!

Credit goes to Rex and Rory and the bunch at Northstar.  The thing still looks like it’s brand new!  And believe me, I have tried my best to shake, rattle, and roll it to death!  I have hauled my Northstar close to 90,000 miles over some of the roughest roads in North America and she still looks brand new.

Gordon and Angela were nice enough to ask me to share some of my pictures and memories from this summer, so it here goes.  I hope you all enjoy them.  I literally had the time of my life making them. 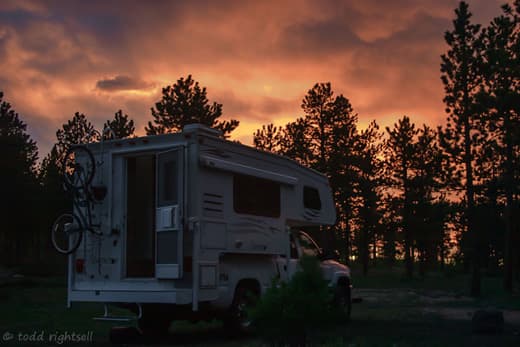 I left Greensboro, North Carolina on June 12th and made a beeline for Colorado.  The plan was to spend a week or so in Rocky Mountain National Park and see my cousin in Boulder.  I knew the park would be crowded and I wanted some solitude and a sense of camping in the wilderness, so I detoured and headed a bit north of the park and ended up in the Roosevelt National Forest for my first official night of camping of the summer.  I found a forest service road and off I went.

A few miles in I found a small dirt road off the main road and followed that into the woods a few hundred yards and set up camp in a small clearing.  I was treated to a spectacular sunset and more solitude than I could stand!  The next morning I woke up to a light dusting of snow and thirty-five degree temps, a bit different than summer in North Carolina! 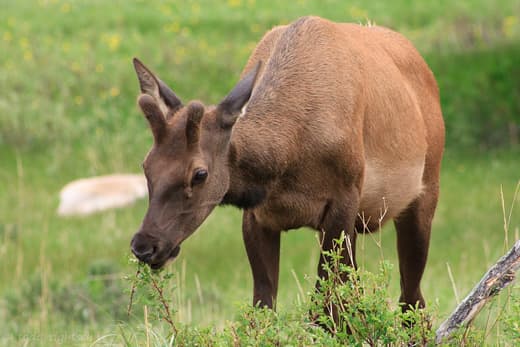 After getting my fill of camping in the woods alone for a couple of nights, I headed into Rocky Mountain National Park.  RMNP is famous for (among other things) its Elk herds.  If you spend any appreciable amount of time in the park you are sure to see Elk close up.  I set up camp for a couple of nights in the Moraine Park campground and captured this cow on my evening walk around the campground.  She was pretty used to people and she was drawing a crowd.  I managed to get close enough to get at least one good shot. 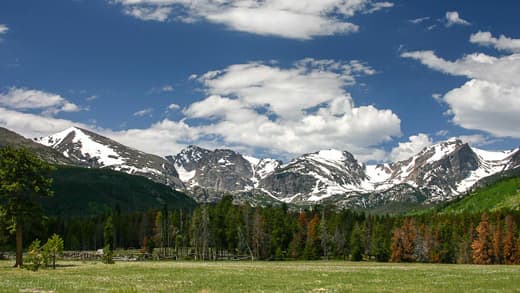 I spent a couple of nights in Moraine Park Campground before relocating further up the Bear Lake Road to Glacier Basin Campground.  The place was half empty when I checked in and I was able to grab a prime spot.  This may be one of the best views in the park and it was right out the back door of my camper!

Needless to say, I was in no rush to leave so I spent a few nights here just enjoying the eye popping scenery and spectacular hiking from the trail heads along Bear Lake Road.  The park offers a free shuttle service that comes right by the campgrounds and takes you to the trail heads which makes getting around easy and keeps congestion down along the road.  Although several parks offer a similar service, more should follow their lead. 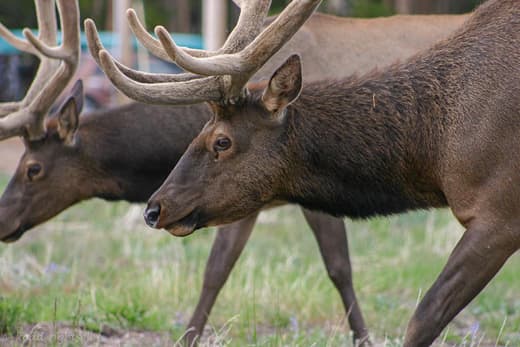 When I checked in to Glacier Bay I had no idea what awaited me that evening.  About 6:00 pm a small herd of young bull elk showed up.  When I say showed up I mean they literally wandered right through the middle of the campground like they owned the place.  This photo was taken from the picnic table in my campsite.

These things are huge and their racks are massive.  They made their way through the campground and into the field in the photo above.  What a sight!  Eight bull elk were together with one of the most scenic backdrops in America behind them, the snow capped Rocky Mountains.  It was truly an awesome sight. 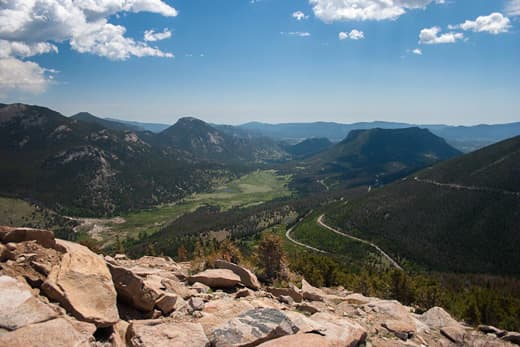 Although I had been to Rocky Mountain National Park three times before, I had never been over to the west side of the park, which many say is the better side.  The shortest way to get there from the east is up and over the spine of the Rockies.

As luck would have it, there is a road.  Trail Ridge Road is the highlight of the park.  This is the highest through road in America.  It winds its way up and over the continental divide and peaks out at 12,183 feet.  This is one of the most amazing drives in America.  At the very top there is a large park visitor center that focuses on the climate/ecology of the alpine tundra.  One exhibit in particular describes the brutal winters up here on top of the world.  Fascinating. 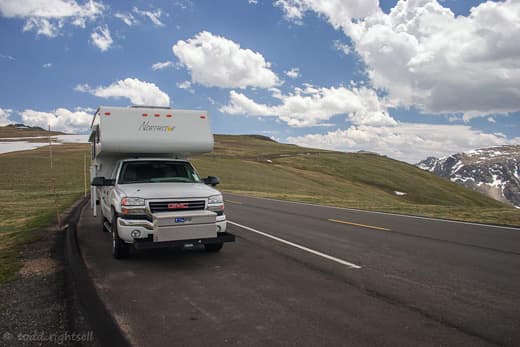 Here’s another typical scene along Trail Ridge Road.  Although I have driven this road to the top four times now, it never gets old.  This is some of the most unusual and different scenery I have ever seen.

Note the plow sticks to the left of the camper.  They are about twelve feet high and used as guides when they start plowing and clearing the road in the spring.  They get lots of snow up there.  In fact, the day before this was taken it snowed so bad the park ended up closing the road for the rest of the day.  It just so happened that they were having a big bicycle race that day as well.  It’s a grueling race that travels all the way across Colorado and goes up and over Trail Ridge Road.  The weather got so bad that they called the stage off and had to evacuate some 200 cyclists off the mountain.  That’s summer in the Rockies! 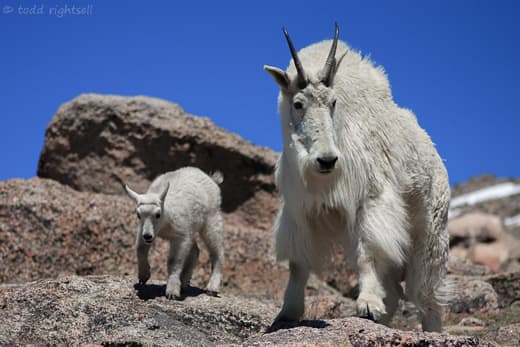 While in Rocky Mountain National Park, somebody told me about the Mount Evans Byway just outside of Denver off I-70.  When they told me it was the absolute highest road in the USA, I knew right then I was going to the top.  While Trail Ridge Road in RMNP is the highest actual through road in the United States, this road is higher still.  It dead ends at the top of Mount Evans; one of Colorado’s iconic Fourteeners.

The end of the road is just over 14,100 feet.  This is the highest I have ever gone and it was painfully obvious by the lack of oxygen!  The short climb up a relatively benign hillside to get near these goats was a killer.  This is one of the best places in the United States to see mountain goats.  I was lucky to see a group of about fifteen or so and even luckier to get some really good pictures.  At times they were so close I was a bit nervous, especially when one licked the sole of my boot as I was lying over a rock trying to catch a good shot of the others further up the hillside.

If you ever get to Colorado this is a must see.  This may be the best drive I have ever done.  And yeah, I hauled the camper up there! 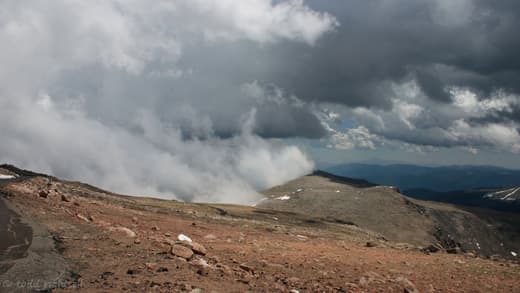 This is what you get for spending too much time on a mountaintop.  After attending a great ranger program, and being on the top of the world for four hours, I turned around only to see this sight facing me.  It suddenly dawned on me that I was going to have to drive right through that cloud to get back down.  It was pretty cool to see the clouds roll in below me!

The drive down was a pretty hairy one, as the road can be terrifying in spots even in good weather.  Not only that, but on the way back down I was in the outside lane most of the way, which is the lane hanging on the edge of the cliff.  Thank goodness nobody was coming up because I was driving right down the middle the whole way down!  Amazingly it never rained or snowed, there was just dense fog.  I have never been so glad to get off of a mountain!  But I’d do it again in a heartbeat. 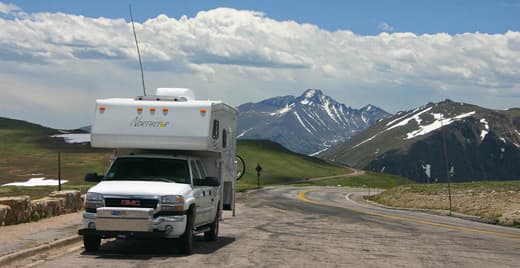