Todd Rightsell braves bears and bad weather to bring us the best of Glacier National Park in pictures, hikes, drives, campgrounds, and boondocking.  Take us to the notch!

For this installment of Top Shots, Todd presents some of the best photographs we’ve ever seen, and gives us the goods on the best hikes, drives, campgrounds, and more in Glacier National Park. 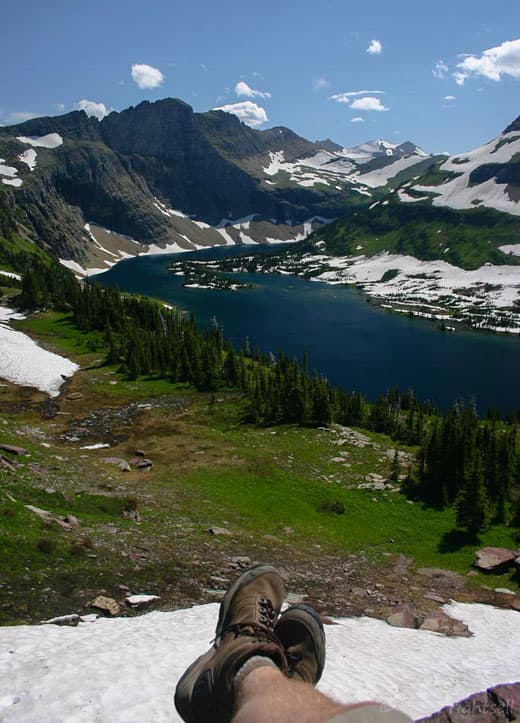 Glacier National Park is awe inspiring.  Parts of it look like scenes from, “The Sound of Music”.  This was taken at Hidden Lake, a mere one and a half miles from the Logan Pass visitor center.  I spent hours up here just enjoying the scenery and looking at the mountain goats.

The water in the lakes in Glacier National Park is the deepest and most intense shade of blue I have ever seen.  I sat on the edge of this small cliff for several hours just taking it all in.  If you have been here on a sunny and clear day, you understand.  If you haven’t, well… 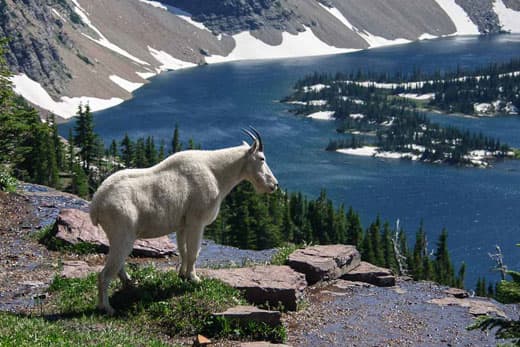 The mountain goats at Hidden Lake are good sports.  I guess they are in a good mood or something, because they sure don’t seem to mind the tourists gawking at them and the kids chasing them and trying to pet them.  It’s amazing how some folks act around wild animals.  I guess I’d be in a good mood too, if I lived here!

This was about a half mile past the official Hidden Lake overlook.  If you ever get here, I definitely suggest going past the official overlook, which is a tourist trap, and find a good spot further out around the lake to enjoy the solitude.  There are less people and more goats!

Two days later this area was closed due to bear activity.  A mother Grizzly and her two cubs had decided to hang out for a couple of days so the park rangers closed the trail.  In the parks, the animals take precedent.  It makes me wonder what was running around behind me in the hills while I was hypnotized by the scenery in front of me! 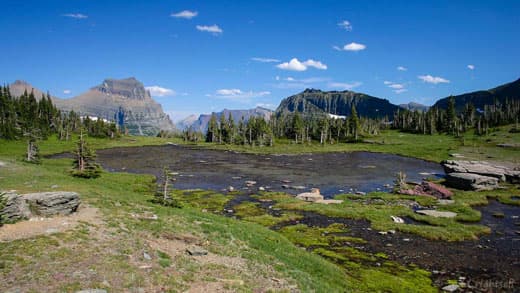 This was taken while walking back from Hidden Lake.  It is a great example of a hanging valley.  Notice how the valley just disappears over a cliff.  Hanging valleys are unique to mountain landscapes and are caused by glacial activity.  A glacier carves a U shaped valley as opposed to a V like a river.

At one time, this area was covered in thick glacial ice which flattened or scoured the floor of the valley as it moved downhill.  Then it ran into an even larger glacier coming in from a ninety degree angle and the larger glacier sheered off the smaller one.  When the ice melted, these hanging valleys were left behind.  The power of nature is hard to comprehend sometimes. 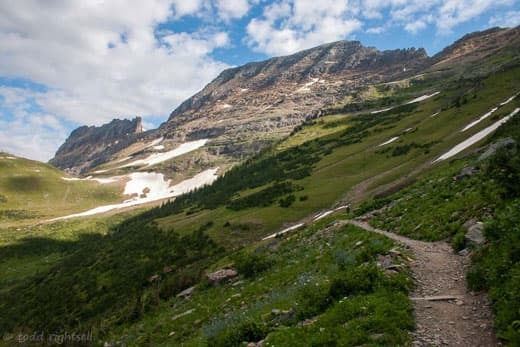 The Highline Trail in Glacier Park is one of the best hikes in North America.  This was taken the second time I hiked the trail, the first time being back in 2009.  I got up sort of early and made sure I was on the first bus out of the campground to the top.

From Logan Pass, you walk out eight miles to the Granite Park Chalet.  It is mostly flat and not too bad of a walk and, as you can see, the views are stunning.  Once at the chalet (which you can still stay in) it’s a four mile downhill walk to the loop on Going to the Sun Road.  From there, the shuttle bus will pick you up, usually within fifteen minutes, and it is a short ride back to where you started.

The rock formation is part of the continental divide and called the Garden Wall.  It runs for several miles along the trail.  The whole idea is to get to the notch, which is that low point in the distance, and peer over the other side at Grinnell Glacier. 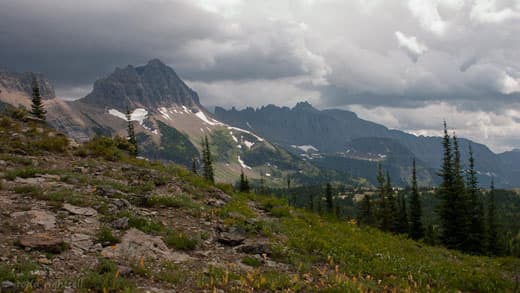 Another shot of the notch.  If you are paying attention, you can see that I have passed it.  This was the second time I had to bail out on the attempt to peer over it.  The first time was in 2009 and I was simply too beat and out of shape to try.  It is about six-tenths of a mile from the main trail up to the notch, and about 700 feet in elevation gain.  All that after already walking eight miles plus, the four miles left to get out.  I told myself that day that I would be back and try again.

Well, this day was the second attempt and as you can see the weather was a bit dicey.  So I bailed out again.  As I walked the four miles back down from Granite Park Chalet to the loop in the pouring rain, and sometimes sleet and snow, I was okay with the decision that I had made.  But I knew that I had time to make another attempt and I swore to myself that I wouldn’t leave Glacier until I had done it. 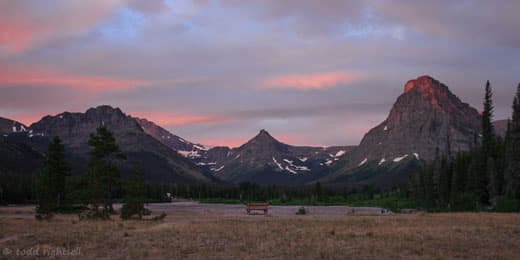 After the failed attempt at the notch, I relocated from Rising Sun Campground to the Two Medicine complex.  I rolled in about 11:30am and somehow managed to score the best campsite in all of Glacier National Park.  This was the view from my campsite for five glorious days.

The sunset over Sinopah Mountain each evening was the highlight of the day.  While here, I attended two ranger programs where an elder from the Blackfeet Tribe spoke.  Those two nights were probably the best ranger programs I have ever been to.  The speaker’s last name was, “HeavyRunner” and his family were fairly high ranking members of the Blackfeet Tribe, which lives just outside the park today.

Glacier National Park was the homeland of the Blackfeet until they were basically tricked into giving it up.  The stories he told, and perspective he had on nature; the land, the animals, and the local culture, was fascinating. 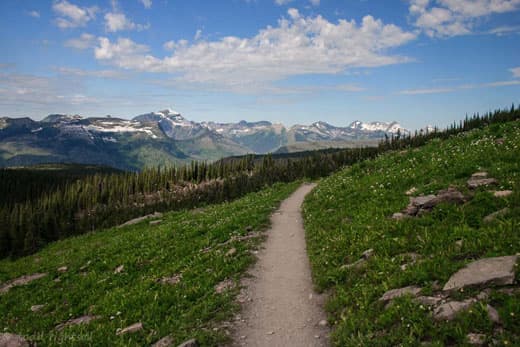 After leaving the Two Medicine area, I decided to head to the west side of the park and checked in at Apgar Campground for several nights.  It was from here that I would launch my third attempt at the notch on the Highline Trail.  I was determined to see Grinnell Glacier on the other side!  So I got up sort of early again and rode my bike to the newly constructed transportation center and hopped the first bus to the top of Logan Pass once more.

The shuttle bus system in Glacier National Park is fantastic.  It allows you to focus on the jaw dropping views while somebody else does all the driving.  I hopped off the bus and hit the trail confident that I was going to make it this time.

I had gone about 300 yards when the couple out in front of me stopped and circled something on the trail with their hiking poles.  I knew instantly it had to be bear tracks or scat and sure enough it was tracks; a big one and a little one headed the same way I was going!  I caught up to them and asked if they minded if I hiked with them as I was alone and a bit nervous.  I had run across a grizzly by myself on the trail about two weeks earlier in Yellowstone National Park, but that’s another story.

So the three of us took off and I managed to keep up with them for about four miles or so and then told them to go on after we rested for a minute.  We hadn’t seen any tracks for a while and I figured I was okay.  As soon as they left me behind, I walked about a quarter of a mile and right in the middle of the trail was a big pile of very, very fresh bear scat.  Great.  I kept going.  I had no choice.  I was yelling the whole time and could hear others yelling too.  I never saw the bear though, thank goodness. 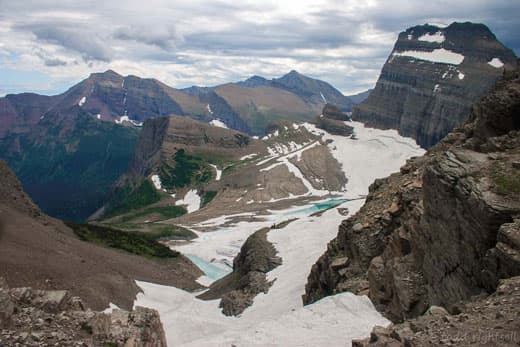 Finally, after three years, two failed attempts, and dodging bears all day, I made it to the notch.  After the most brutal six-tenths of a mile I have ever hiked in my life, this was the view I was treated to.

This may be the most stunning view I have ever seen, because it is so different from anything else you will probably ever see, not to mention the fact that it took me three tries and three years to get here.  It holds a special place in my memories.  That is Grinnell Glacier down below.  One of the next big challenges for me in life will be to actually hike down to it and then down the drainage below into Many Glacier, which is about seventeen to eighteen miles in total.  Perhaps this summer.