Al Stebbins shares his 8,000 mile truck camping trek from the Shenandoahs, across the plains, into Idaho’s City of Rocks, and home.  Thirty-two states for one lucky dog.

In early January of 2013, I tore up my rotator cuff after a day ice climbing.  After surgery, the doctors told me no rock climbing until the beginning of August.  What to do?  In my case, the answer was to be in Idaho’s Silent City of Rocks on August first.

On July 14th, I left home in Massachusetts with our dog, Piton, and joined our truck camping friends John and Carol Barry to head for the golden West.  Piton and I were in our Northern Lite truck camper.  John and Carol were in their Lance.

Back then I had a job as a dishwasher and was involved in some political activities that I was pretty sure would leave me washing dishes for the rest of my life.  I had no money, no job prospect, and no real future.  All I had was my independence.

My girlfriend, at the time, had just graduated from college.  The two of us had an unusual amount of freedom and a nothing-to-lose attitude, so we hit the road.  Our recreational vehicle was my aging Volkswagen Bug.  Our camping equipment consisted of one old red blanket and a soda bottle wrapped in tinfoil, which was all we really needed.  The sixties had broken like a wave on a shallow beach and was receding.  The Age of Aquarius was about to be replaced by John Travolta and disco.  It was all pretty depressing.

Then I discovered the Shenandoah’s power to heal one’s soul.  In the years to come, my old college roommate, George Sands, and I would backpack the length of the park.  I’d been back many times since, and never seem to grow tired of the place.

Getting back to our truck camping trip, Shenandoah National Park lies along a long ridge line of hardwood southern Appalachian forests.  If you drop off the ridge, the side trails (off the Appalachian Trail) lead down drainages to deep-forested hollows.  Carol, Piton, and I decided to hike down to Doyles River Falls. 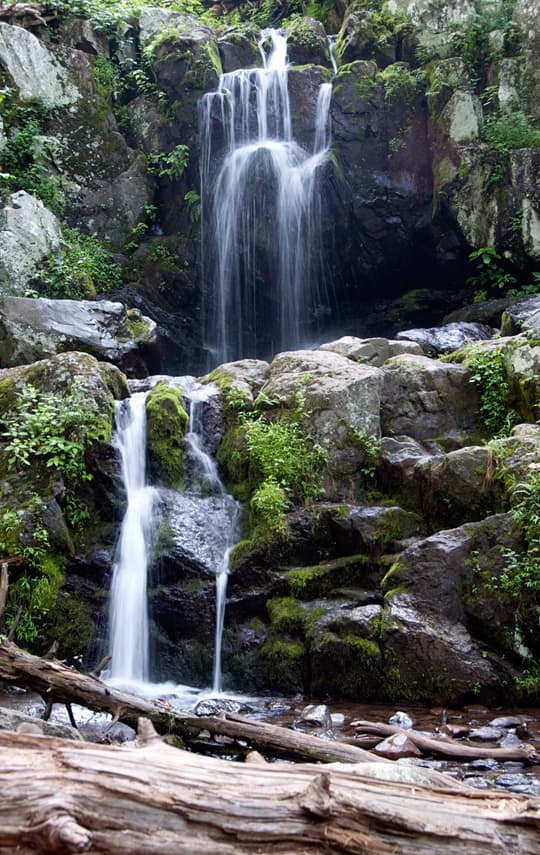 The start of the trail was easy.  Heck, we were going down hill.  Of course the way back meant trudging up to the top of the ridge.  Nearing the ridge top we stopped to get our bearings and I heard Carol say, “Isn’t that a bear?”  Sure enough, it was.  Piton was only fourteen months old and, the good little trooper that he was, he got in front of her and growled (and it’s a deep growl) at the bear.  Piton was not only emotionally attached to Carol, but he was also physically attached – he was tied to her waist!  I was envisioning the bear running off, Piton chasing it, and Carol being dragged down slope to her doom!  Fortunately for all, the bear decided to amble off.

From the Shenandoah, we drove our truck campers west, crossed the steep forested ridges of West Virginia, and slipped into Kentucky.  We stopped at Lexington where my bride, Nancy, joined us.  She had never been to Kentucky before and wanted to see it.

Now if your idea of Kentucky is Ma and Pa Kettle sitting on the front porch with a jug of moonshine between them, Lexington won’t fit your image.  Nor would you see Elvis walking through the cold Kentucky rain here.  This was horse country with well-manicured horse farms as far as the eye could see. 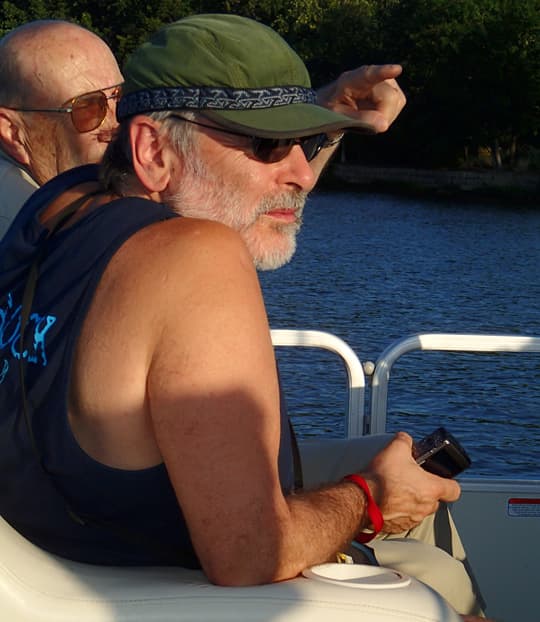 In Kansas we stopped near Kansas City to spend a delightful evening with Nancy’s relatives.  They fed us real Kansas City barbecue, which was a treat for the senses.

Kansas winged by and we camped in east Colorado.  If east Colorado had a motto, it might be, “And you thought Kansas was flat!”
As we approached Denver, we finally saw mountains on the horizon.  We had crossed the Great Plains.

Turning north, we drove until we were in Wyoming and then headed west on Route 80 across the rolling prairies of southern Wyoming.  After sunrise, and before sunset, we saw antelope in the distance.

From Wyoming, we crossed into Utah and explored Ogden before heading north into southern Idaho. 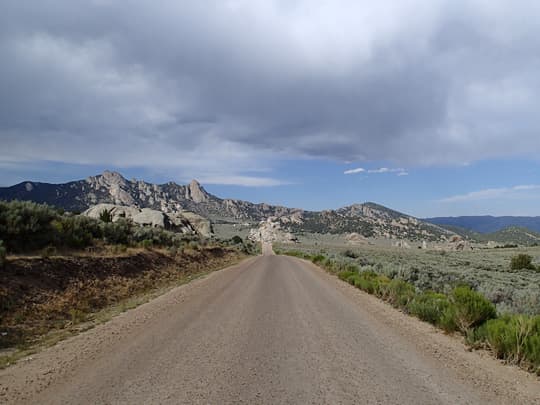 Above: The road into City of Rocks National Reserve, Idaho

We drove a short distance on pavement and then twenty-seven miles of dirt road to the Silent City of Rocks; also known as City of Rocks National Reserve. 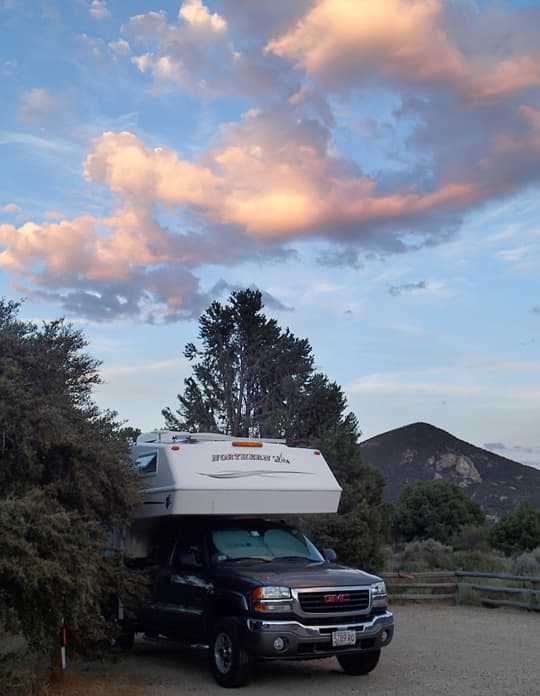 Above: The campground at City of Rocks National Reserve, Idaho 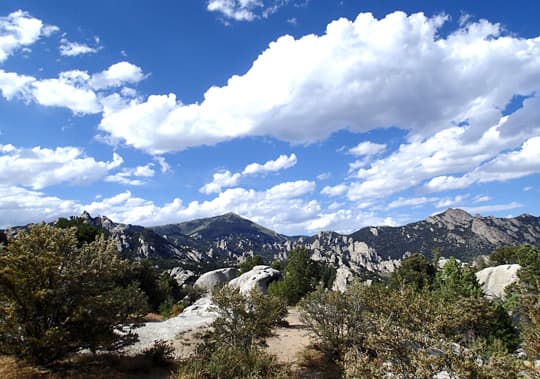 Located on the old California Trail, the area is world famous for its rock spires.  The early travelers named it for the rock formations that look like a city born of stone.  Climbers from all over the world love these steep hard rock formations.  The face climbing, in particular, is excellent. 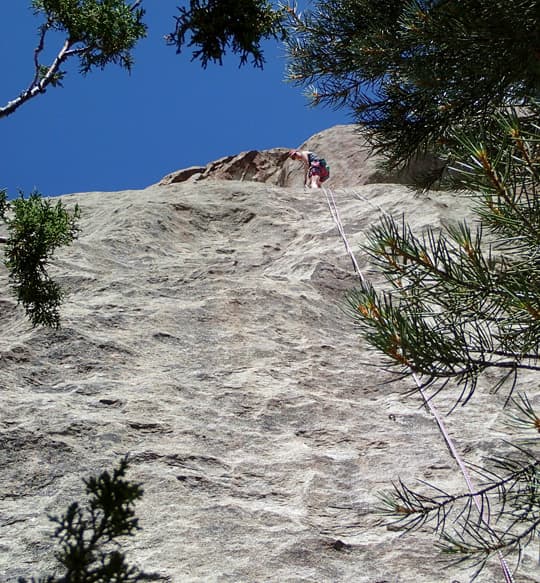 We spent a week at City of Rocks climbing the perfect stone during the day and looking at the sky at night.  From that remote location, the Milky Way looked like a broad highway of light, bound for a destination beyond my understanding. 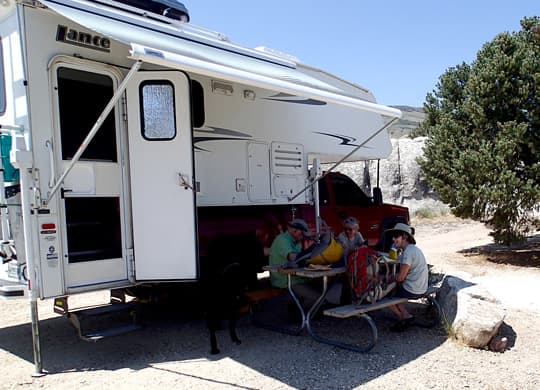 Above: Hanging out John and Carol’s camper at City of Rocks National Reserve, Idaho 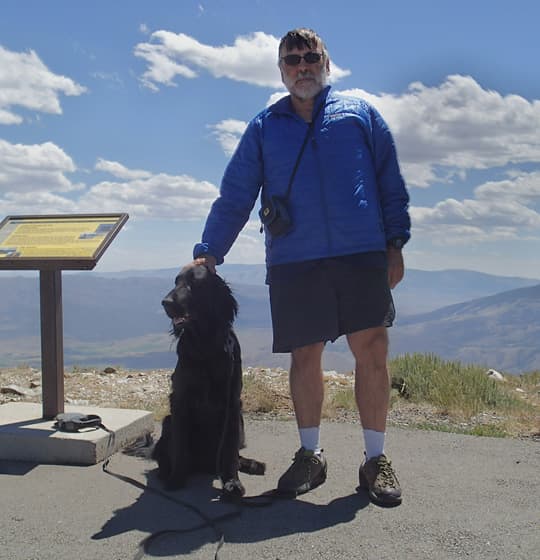 Above: Piton and Al at Mt. Cleveland, Idaho

Mt. Cleveland is about an hour drive from The City of Rocks.  While camping and climbing we took a day off and drove up there as there was a lake where our dog, Piton, could take a swim.  It was a side trip while we were camping in The City of Rocks.

After a week in paradise, Nancy had to leave for Salt Lake City and catch a plane that would take her back to the world of commerce.  It was hard to see her go. 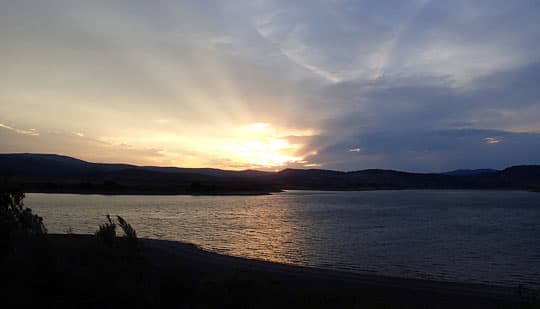 After saying goodbye to Nancy, John, Carol, and I turned west again and drove to a state park in eastern Oregon called Unity Lake.  If there is such a thing as a world record mayfly hatching we may have witnessed it.  The campground staff had to literally take a hose to wash the mayflies off the walls and ceiling of the bathrooms.  The mayflies were plastered on these surfaces about a quarter of an inch deep.  Nature isn’t always so pretty. 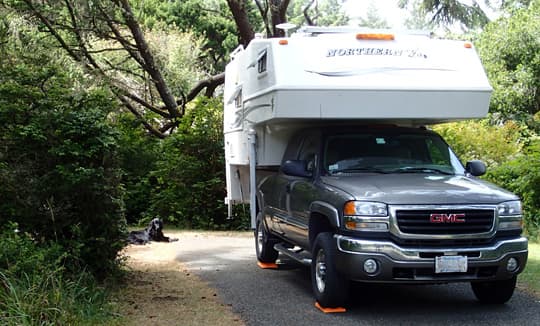 From there we set out west again to the Bend, Oregon area.  I had hope of meeting up with an old climbing buddy, but it didn’t work out.  We pushed on to a fabulous state park on the Oregon south coast, Cape Blanco.  Cape Blanco is a thumb thrust out into the Pacific Ocean.  Most campsites are walled off by thick vegetation.  You can walk to a point overlooking a grassy slope that ends in the sand above the ocean. 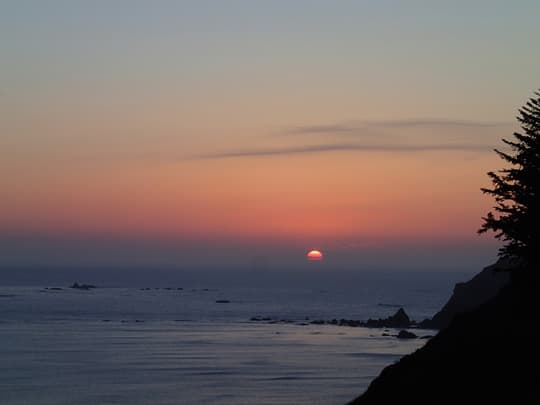 Jack Foito, my lifelong friend from seventh grade, had just retired and drove down from his home on the Washington coast to meet us.  Jack, Carol, Piton and I walked on the Cape Blanco beach, sat down, talked, and talked some more.  You can be on the beach at Cape Blanco, look in either direction, and not see another soul.  Whoever had the idea of protecting this land from the despoilment of developers, who have wrought so much wretched ticky-tacky on the East Coast, surely must be assured a place in heaven. 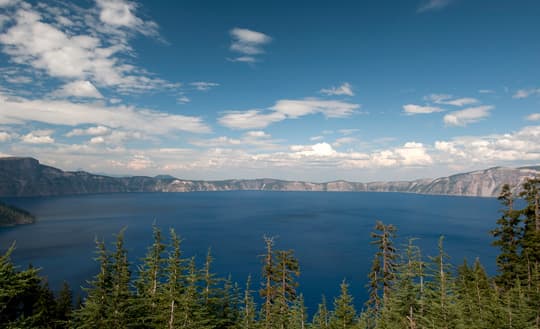 John and Carol had never been to Crater Lake National Park, so we plotted a course there. Jack decided to join us.  You don’t see Crater Lake as you approach it.  One minute you’re out of your truck walking up a slope, and then suddenly there’s this amazing, shockingly blue lake at the bottom of a crater!  It’s a gorgeous sight to behold.

After Crater Lake, Jack headed home and we drove south into the California mountains.  When we left Oregon it was about sixty-five degrees, but the outside thermometer on my truck started to climb.  It hit 70, then 80, than 90, and finally 101 degrees!  We eventually drove out of the extreme heat and knocked around the northern California mountains for the better part of a week.  What a beautiful area that is. 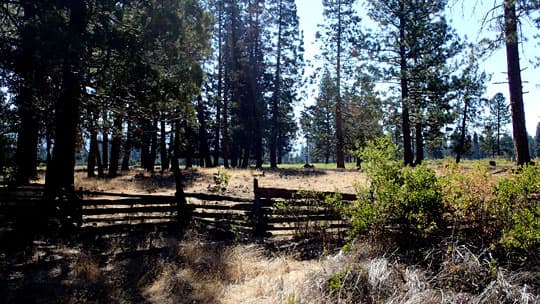 In Hat Creek, California, we met up with my great niece, Liz Chueka, and her fiancé, Jon, for a weekend of camping together.  John, Carol, and Jon drank wine and tended the fire, and Liz and I cooked, and talked.  We were both history majors, and enjoy the world of ideas.  Our family enjoys the spoken word.

We left Liz and Jon on Sunday morning and headed southeast out of the mountains.  We emerged near Reno, Nevada.  The smoke from the Yosemite National Park fire hung thick in the air, even though it was over a hundred miles away.  Then came the point in the trip that, prior to my retirement, always made me sad; we turned due east.

We eventually reached I-80, which would take us back to sweet New England (Paul Simon, eat your heart out).  We traveled through Nevada, Utah, Wyoming, Nebraska, and Iowa.  Each state brought me closer to my bride.  From eastern Iowa we got an early start and made it all the way east of Cleveland, Ohio.  Here we found a place to camp after what amounted to a giant snipe hunt for a campground south of Ashtabula, Ohio.

John and Carol would need one more night out to reach Maine, but Piton and I put our sights squarely on our home in eastern Massachusetts.

We reached home about 8:00pm.  We had traveled just under 8,000 miles.  We had hiked in the broadleaf forest of the southern Appalachians, crossed the Great Plains, rock climbed in the high desert of the Great Basin, walked on Pacific beaches, and spent still nights in the mountains of northern California. 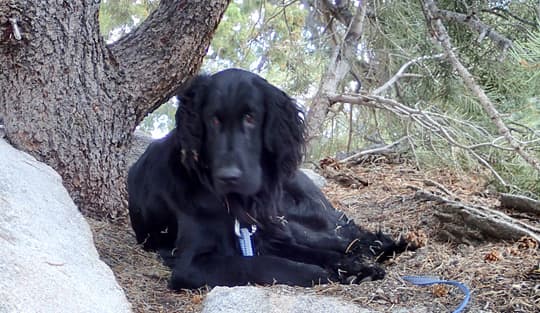 We spent time with old friends, and met new ones.  Piton has now been in thirty-one states, which is not too bad for a dog who is only a year and a half old.

We had quenched the thirst to wander, at least for now.

Home » Expeditions » Travel The USA » The Thirst to Wander