Jim and Mary Jeffries traveled from Cody, Wyoming to Red Lodge, Montana with their Phoenix Camper via the Beartooth Highway, commonly called the most beautiful drive in America.

As part of a 4,000 mile trip exploring Wyoming and parts of Montana from our home in Tucson, we found ourselves in the Old West town of Cody, Wyoming.  We love the small towns and wide open spaces of Wyoming along with its beautiful mountains. 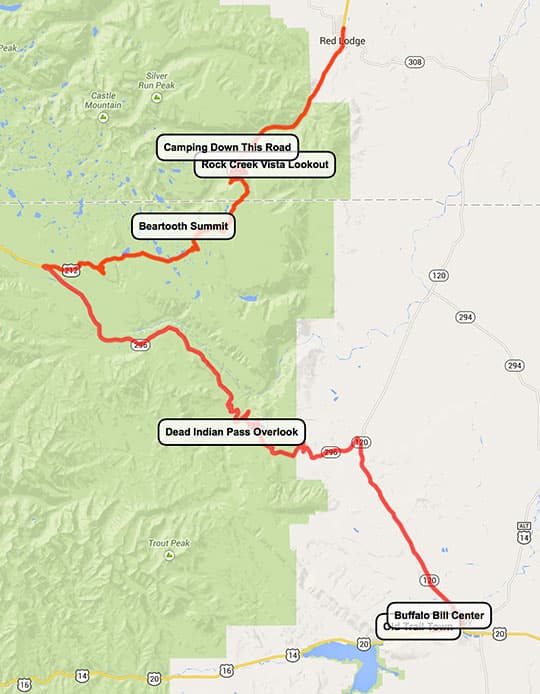 Above: This was our route as shown on Scribblemaps.

The highlight of our Wyoming trip turned out to be a road trip from Cody to Red Lodge, Montana, over the Chief Joseph Scenic Byway and the Beartooth All-American Road.

Cody, Wyoming and the Buffalo Bill Center of the West Museum 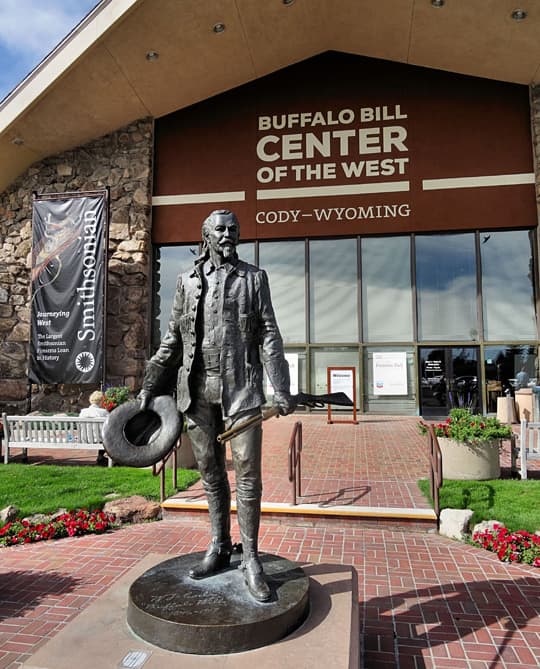 I highly recommend a visit to Cody.  Cody gives you an opportunity to glimpse the Old West, and is a gateway to mountains and different routes.  A visit to Cody could be several days or longer to see and explore the surrounding area.  For local information and booking tours, start with the Cody Visitor’s Center, with its local artist store.

Above: The Buffalo Bill Center of the West Museum – click to enlarge

Friends had told us about the Buffalo Bill Center of the West and I highly recommend it during your visit to Cody.  The museum is associated with the Smithsonian, and the quality of the museum is evident.  Your admission ticket is good for two days.  I’m not sure you can see this museum even in two full days.  We couldn’t.

Above: The Buffalo Bill Center of the West Museum – click to enlarge

We were most interested in the Buffalo Bill Museum and the museum of the Plains Indians.  The collection of firearms was also amazing.  We especially gained insight into Buffalo Bill’s life.  He built the historic Irma Hotel still thriving in Cody, and toured the world with the Buffalo Bill Wild West Show including over 1,000 participants.

Above: The Old Trail Town Museum – click to enlarge

Also in Cody is a wonderful collection of historic wooden buildings in the Old Trail Town Museum.  You’ll feel like you stepped into the Old West when you see these original cabins.  Mountain man Jeremiah Johnson’s gravesite is there along with other mountain men.  The Old Trail Town Museum is on the way out of town on the highway going toward the East Entrance of Yellowstone and Buffalo Bill State Park.

At Buffalo Bill State Park, you will find camping on the Buffalo Bill Reservoir for $17 a night for non-residents.  The camping sites generally overlook the lake.  We camped at the North Shore Bay campground because it’s closest to town, and used the campground as a base to explore Cody.  The campground includes three loops, one of which has electricity for an extra five dollars a night. 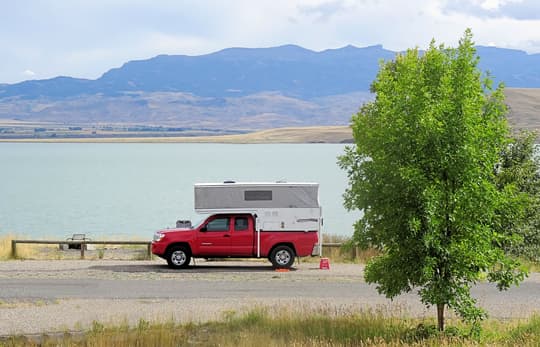 There is a lot to explore near Cody, including back roads like Highway 291, also known as the Southfork Road, that takes you on a scenic byway where Buffalo Bill had his famous T E Ranch.

If you entered Cody from the South on Highway 120, as we did, Meeteetse, Wyoming has the free Belden Museum with its wonderful photographs capturing the Old West and ranch life.  The museum also includes history and works by the artist Harry Jackson who has displays in the Buffalo Bill Center of the West.

When it was time to leave Cody, we had a decision to make about our route to Red Lodge, Montana.  We had heard about the Chief Joseph Scenic Byway, Highway 296, including Dead Indian Pass.  We chose that route.

It is only 116 miles via Highway 296 to Red Lodge.  To follow our route, we left Cody via Highway 120 North to the turnoff on Highway 296.  After turning on Highway 296, the road starts immediately to climb along the Chief Joseph Scenic Byway up to Dead Indian Pass with views across the Absaroka mountain range. 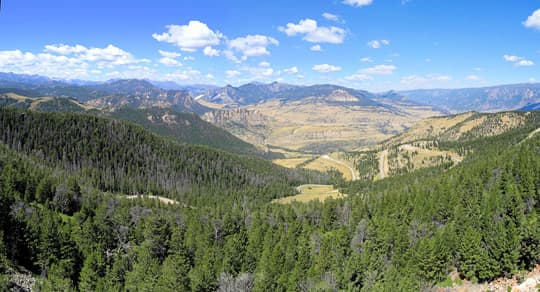 Above: The top of Dead Indian Pass on the Chief Joseph Byway looking across the Absarkoa range

There is a spectacular view at the top of the Pass.  Pull off into the parking area, and see the spectacular Absaroka Mountains and the road winding below.

An interpretive sign gives a quick glimpse of the history of Dead Indian Pass and the last free days of the Nez Perce Indians who were trying to join Sitting Bull after his battle at the Little Bighorn.  Both Indian tribes tried to escape to Canada, but neither tribe was successful.

After descending Dead Indian Pass with its switchbacks, there is a long valley with mountains in every direction.  As you enter this valley, you will see the Dead Indian Campground along Dead Indian Creek.  If this campground isn’t primitive enough for you, you can turn off to the left on Forest Highway 101, Sunlight Road, which leads to at least two primitive campgrounds about twelve miles down the gravel road.  We didn’t take this gravel road, but it looked very interesting.

Along Highway 296, leading to Clark’s Fork River and the junction to the Beartooth Highway, there are more gravel roads to explore with mountain peaks from 7,000 to 12,000 feet high.  You will not find organized campgrounds until you near a small community on the Clark’s Fork River called Painters’ Outpost.  There you can buy gas, eat a meal, buy camping supplies, rent cabins, or camp.  As you continue on Highway 296, you will see Pilot and Index peaks rising to nearly 12,000 feet. 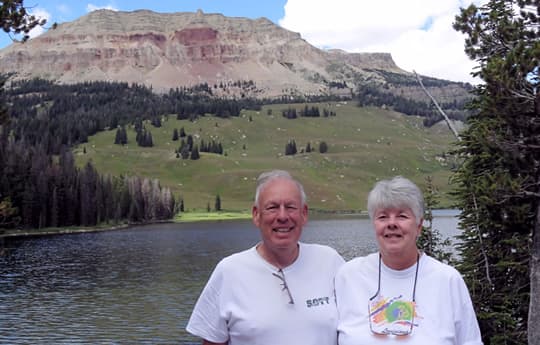 Above: Jim and Mary at Beartooth Lake

After five miles travel on the Beartooth Highway, turning left on Forest Road 142 brings you to the first scenic view at Clay Butte Lookout Tower.  This tower was built in 1942 by the CCC, and gives a panoramic view of several mountaintops.  A little further ahead, a parking area allows for a beautiful view of Beartooth Lake in the Shoshoni National Forest. 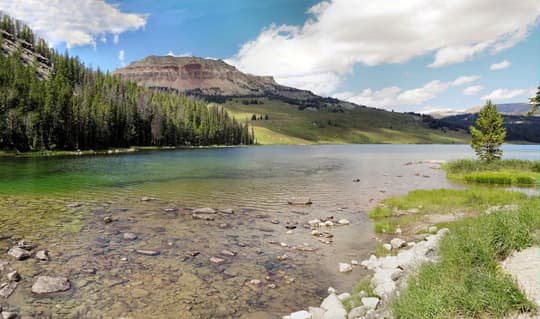 Above: Beartooth Lake in the Shoshoni National Forest

The Beartooth Lake campground, with three loops and twenty-one sites in the woods above the Lake, costs $15 a night.  The camping sites are heavily wooded with no real views of the lake.  If you are camping or fishing at one of the many lakes, you can resupply and buy gas at the historic Top of the World store just past Beartooth Lake.  The owners are a good source of local information. 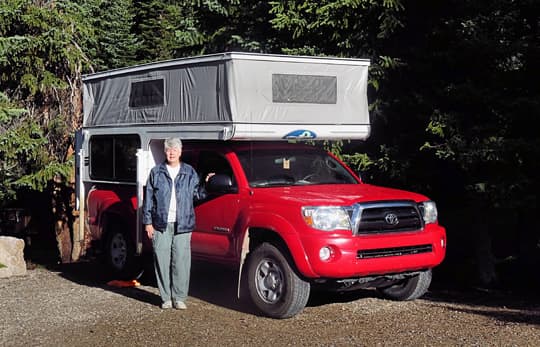 Above: Mary at Island Lake Campground

Another mile beyond the store is Island Lake Campground which also with three loops and 21 sites at $15 a night overlooking a beautiful lake and mountain vista.  Some of the loops are not suitable for large RVs due to the twisty loop road and small sites. There are several hiking paths for those who want to venture deeper into the wilderness alongside this mountain lake.  We camped and encountered mosquitoes in late August.

Above: The beauty near Island Lake

From Island Lake, the road climbs above the tree line and switches back and forth to the Beartooth summit at nearly 11,000 feet with views of the area’s 300+ mountain lakes.  Oncoming drivers are also sightseeing and may be distracted, so alert driving here is recommended.  We nearly had a head-on collision with a motorcycle that drifted into our lane.

Above: The Jeffries’ Phoenix Camper next to Island Lake

Above: The top of Beartooth Summit with with views across the Absaroka mountain range

After Beartooth summit, you’ll see a pull off with a great view of Gardner Lake and the Beartooth spire, for which this range of mountains is named. 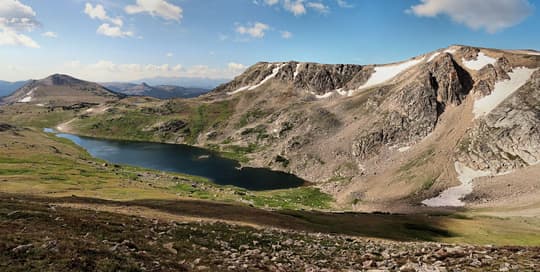 Above: Mary and Jim’s Phoenix camper at Beartooth summit

While on top of the world, another pull off just before the Beartooth Basin Ski Area overlooks several pothole lakes in the valley below.  Alpine ski racers are trained at this facility.  One look straight down told me that this ski area was not for the faint of heart.  From the ski area overlook, the road starts down the pass and into Montana. 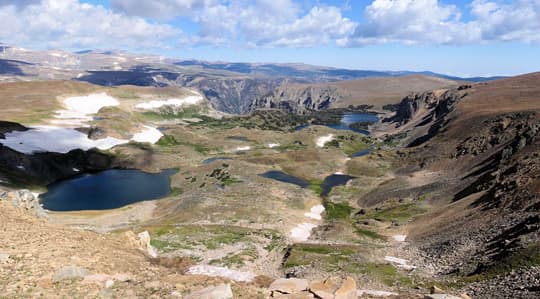 Above: The view from the ski lift area shows several pothole lakes in the valley below

Check out one more great view from Rock Creek Vista at this pull off.  You will walk down a short, paved path to see amazing views and a set of very sharp and slow switchbacks leading into the valley below. 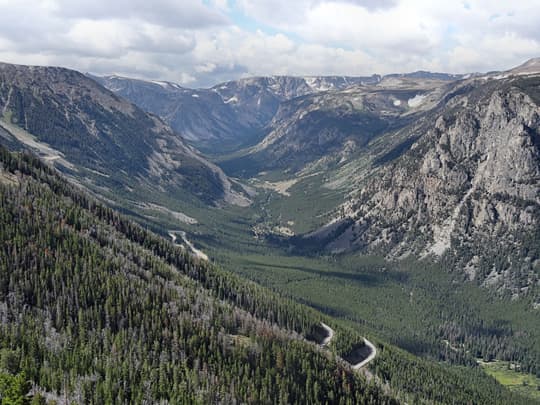 Once in the valley, look for the turnoff on the left leading to campsites on Rock Creek Road, Forest Road 421.  There are several developed and primitive campsites on the paved portion of this road.  if you have a four-wheel drive vehicle, you can follow the unpaved portion of Forest Road 42 up the valley.  Along Rock Creek you will find primitive campsites.

Back on Highway 212, the valley widens out following Rock Creek to Red Lodge, Montana.  Red Lodge is an old mining town that has become a quintessential mountain town with a wonderful historic hotel, the Pollard Hotel. 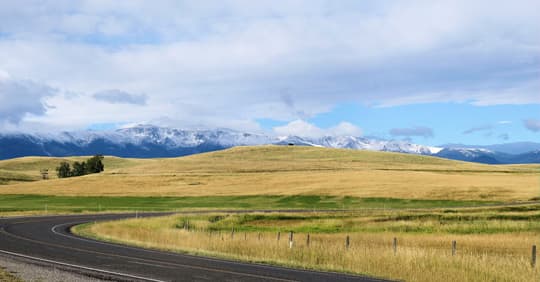 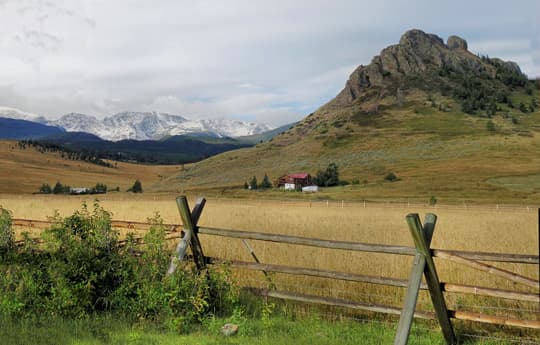 Red Lodge is a good place to enjoy a few days.  There are a myriad of little shops, restaurants, and art galleries.  You will find camping just outside of town on the road to the Red Lodge Mountain ski area.

Red Lodge would also be a good base if you would like to explore even more in the Absaroka Beartooth Wilderness.  It is a fitting end to a spectacular drive on one of the USA’s most scenic roads.

What’s the most beautiful drive you have taken with your truck camper?  Please share your story.

Home » Expeditions » Travel The USA » The Most Beautiful Drive in America