Six fellow truck campers reveal their recommended activities, campgrounds, and other must-do opportunities in and around the South Rim of the Grand Canyon.  The crowds show up early and in high volume at the South Rim, so have your plan ready before you get there.

When visiting the South Rim, we decided to boondock for free just south of the National Park’s gate. We stayed at Long Jim Loop in Tusayan, Arizona.  The elk freely roam through the campsites.

We entered the Grand Canyon’s South Rim gate using our America the Beautiful Annual Pass card.  It was still early to mid-morning, so we headed for the visitor center parking lot.  We got one of the last parking spots.  This place fills up fast!

I was uncomfortable leaving the truck camper behind at Long Jim Loop, so we towed the Jeep into the South Rim area.  We walked the rim trail eastward from the visitor’s center for about two hours and then headed back to the camper to cool off and water the dogs.

“If you are visiting the Grand Canyon, start your morning activities early.”

During our South Rim eastward exposure the next day, we drove the Jeep to the Desert View area to see the eastern edge of the Grand Canyon.  It is not truly the edge of the canyon’s walls.  They narrow to a small valley through which the river runs highlighting the more desolate eastern plain.

It is quite a contrast to the color and complexity of the canyon to the west.  We recommend the eastern edge as an important foil to the South Rim visitor’s center and viewing areas.

If you are visiting the Grand Canyon, start your morning activities early.  There are a vast number of visitors.  The number of folks and the vehicle traffic increases as the day continues. 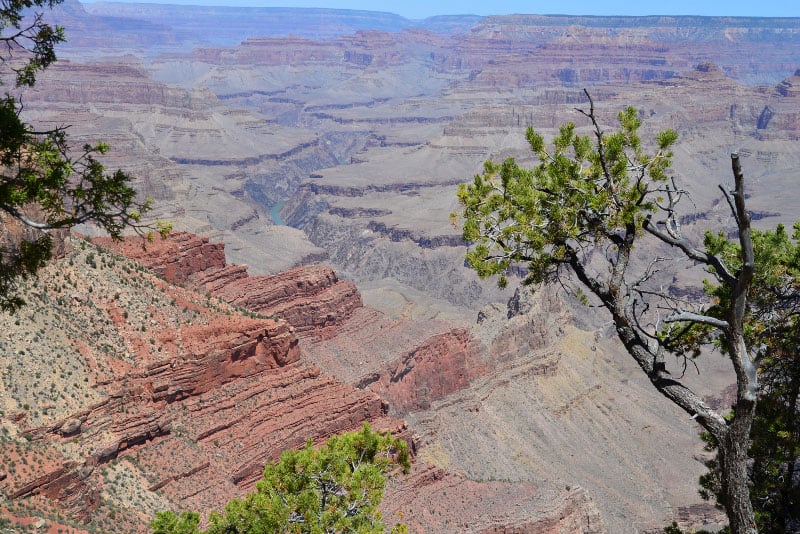 If you are going to go to hike or ride the bus, the bus stops are along the west path for the South Rim.  Park early and head for the buses.  Look for the express bus to/from, so that you do not have to waste time riding through all the typical tourist shops stops, unless that is your thing.

Wide brim hats and drinking water while hiking here is imperative.  Consider doubling up on the water.

The Grand Canyon is truly an international destination.  We heard quite a few foreign languages while we were there; Japanese, Mandarin, German, French, Spanish, across the ponds English, and several we could not identify. 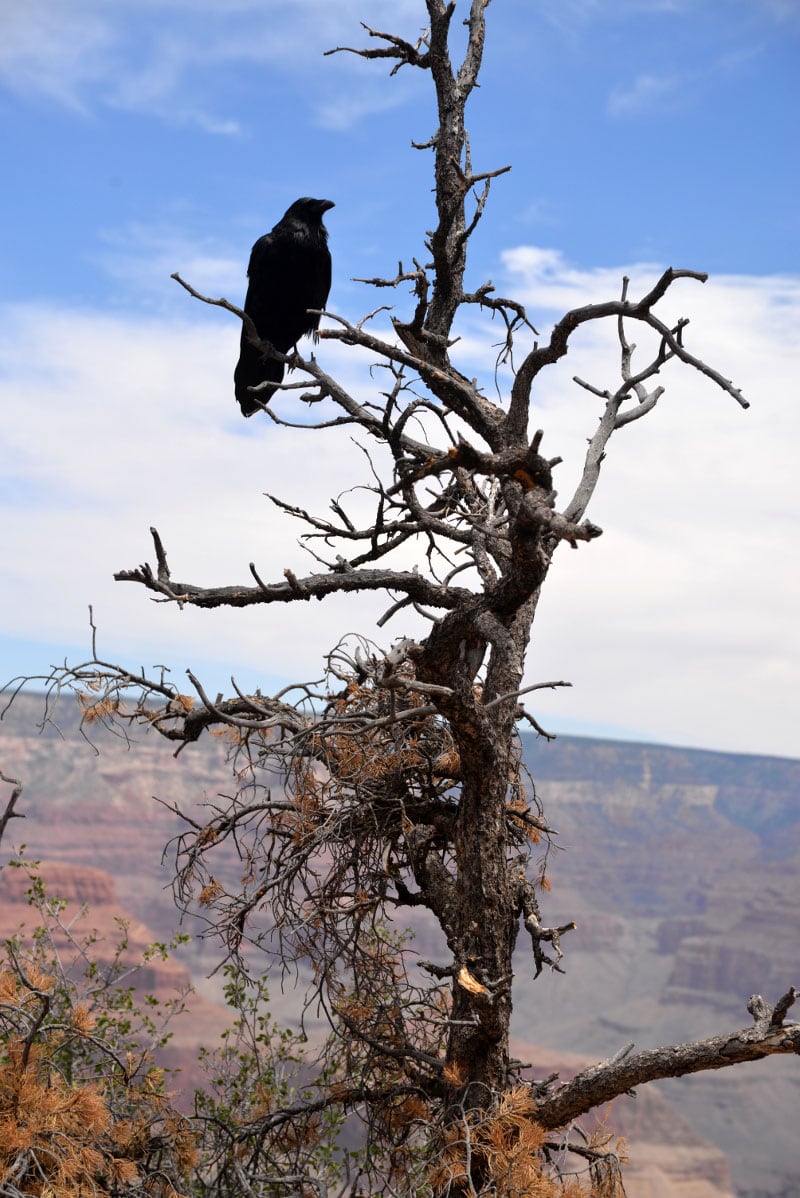 We found out the hard way that our Honda EU2000i generator would not carry a load at the Grand Canyon’s elevations.  The factory, stock equipment carburetor, number 62 jet is too big.  The carburetor needs a 60 jet for above 4,000 feet, and a 58 jet for above 8,000 feet.

I recently evaluated the 62/60 jet relationship at 5,000+ feet.  The correct altitude-appropriate jet really does make for a smooth running engine capable of carrying a load (like a sewing machine and iron for the quilter in my life).

Having the correct jet in for the respective altitude range also keeps the generator’s gasoline engine from destroying itself.  We now carry an additional complete carburetor with the altitude appropriate jet already installed.

We were repeatedly amazed at the idiocy of visitors climbing over and passing around protective barricades and fences.  Many were seen carrying an ice cream cone in one hand and a camera, phone, baby, or water bottle in the other as they navigate, in jellies and flip flops, along shear cliffs ranging in drop off heights from hundreds to thousands of feet.

“There is a free dump station and water fill at both North and South Rim campgrounds.”

The best learning part of the visit?  There is a free dump station and water fill at both North and South Rim campgrounds.  Yes, we got permission at both places to use it.  We parked at the respective visitor center parking lots, showered in the camper and then proceeded to dump and fill.

We find it important to convey that the dump stations we utilized at the Grand Canyon are pretty much the worst designed dump stations ever – and we’ve seen some pretty sketchy stations.

First, they are difficult to maneuver.  You have to zigzag through trees, and there is one way access that puts you at the opposite tilt angles needed.  Second, there is only one tiny station per campground.  We pity the Class As and those mega 5th wheel trailers.  Of course it’s much better than no dump station at all.  Respects to the old adage, “Look not a gift horse in the mouth”. 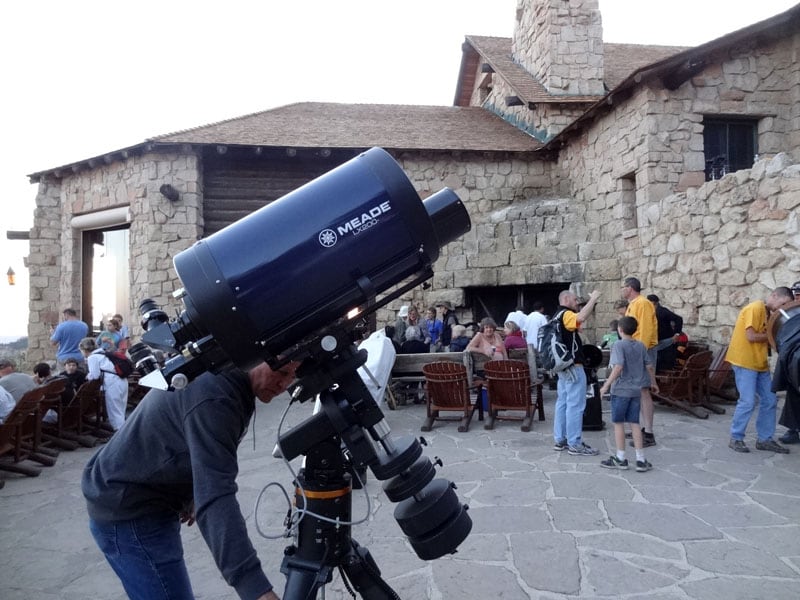 We stumbled across the Grand Canyon Star Party by accident.  It’s held in June at both the North and South Rims during the week there is no moon (June 22-29, 2019).

“We stumbled across the Grand Canyon Star Party by accident.  It’s held in June at both the North and South Rims during the week there is no moon.”

I have to say, the star party at the South Rim was much better.  I’m blabbering on about the star party, but I’ve never seen anything like it! 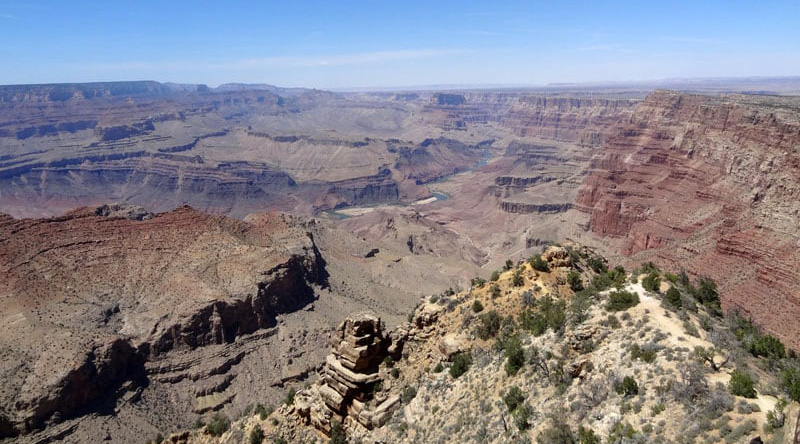 Aside from the great views of the canyon and the many things to learn, we discovered a neat location while walking to our visitor bus.

“Down into the canyon you can see utility poles and lines.  Those are remnants of the Trans-Canyon Telephone Line built in 1935 by CCC (Civilian Conservation Corps) workers and maintained by Mountain Bell.” 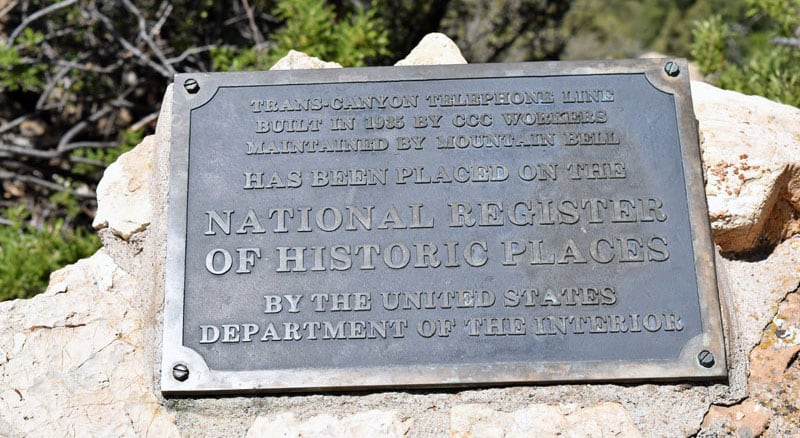 Near the Bright Angel Lodge and Village there’s a plaque.  Down into the canyon you can see utility poles and lines.  Those are remnants of the Trans-Canyon Telephone Line built in 1935 by CCC (Civilian Conservation Corps) workers and maintained by Mountain Bell.  This location is on the National Register of Historic Places.  We almost walked right by it.

We camped at the Desert View Campground which is in the eastern part of the South Rim.  It is a first-come, first-serve style with no hookups.  It is inside the national park.

We arrived at about 11:00am and there were several spots available.  We chose a spot and a camp host came over and helped us reserve the site right away.  The site was set up for dry camping, but had a fire ring and picnic table.

The site was really nice.  It was level with trees.  Neighbors were spaced away enough to be comfortable.  The bath house had restrooms but no showers and no hot water at the sinks.  The visitor bus route doesn’t stop at the campground, so we drove to the Visitor Center to catch the bus.

Make sure to ride the visitor bus because parking is very challenging.  You don’t have to get off the bus at each stop.  You can use it as a scenic tour bus.  Bring a hat for shade.  Be aware of elk along the roadways, and people who foolishly get too close to the elk.

We traveled to the South Rim and spent a couple of nights at Trailer Village, right in the main tourist area.  The South Rim has a shuttle service.  You can take a shuttle south to Tusayan, Arizona, where there are restaurants, shops, hotels, helicopter tours and an IMAX theater.

Other shuttles run along the South Rim, giving the option of a long hike with a motorized return.  A good grocery store, gift shops, and the dining room at the El Tovar is really first class.  A great wine list and the menu make El Tovar a must stop.

In the fall the elk seem to use Trailer Village as a prom dance.  Big bull elk were whistling and grunting at their cows as they wandered around the campsites. 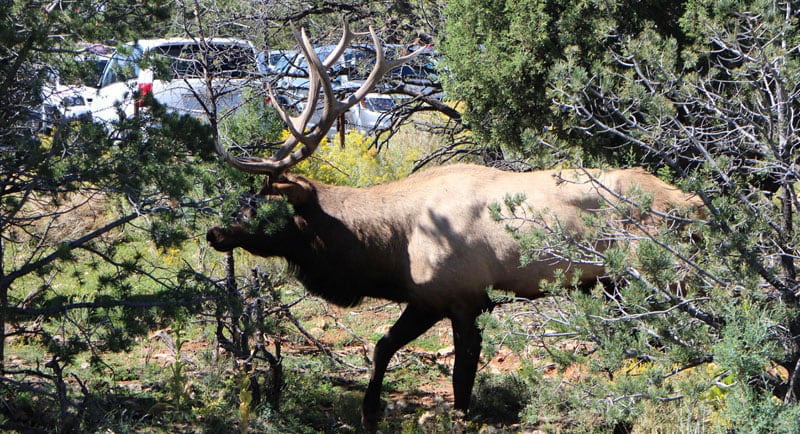 If you are going to travel in the park, and you want to stay in the park, make sure you plan early and try to make reservations.  Also, gas stations can sometimes get further apart then one may be used to.  Topping up at a half tank can make the trip easier.

Driving from Flagstaff I got to the South Rim in the afternoon.  I parked in a Lot B near the post office and the headquarters station. 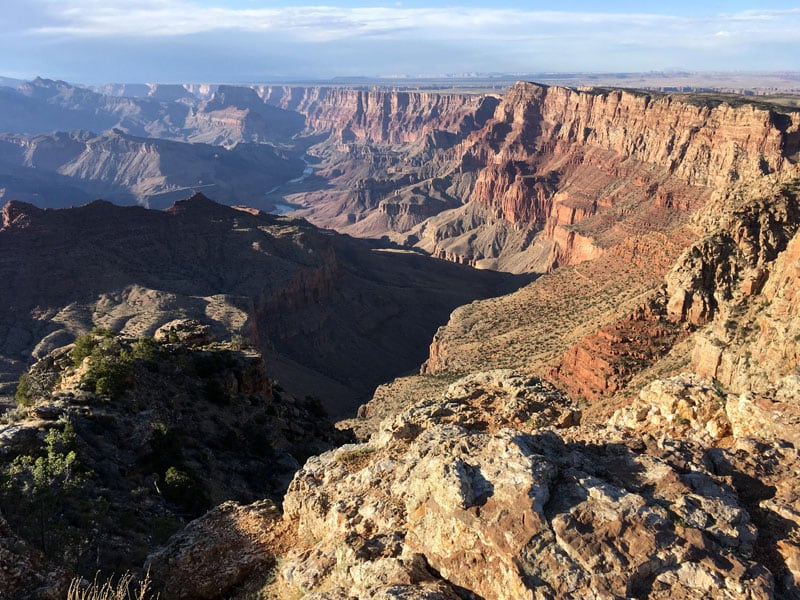 Then I walked the rim called the, “Trail Of Time” going west.  Along the trail are pedestals with a large rocks on them.  Each is a sample of the different formations that make up the canyon. 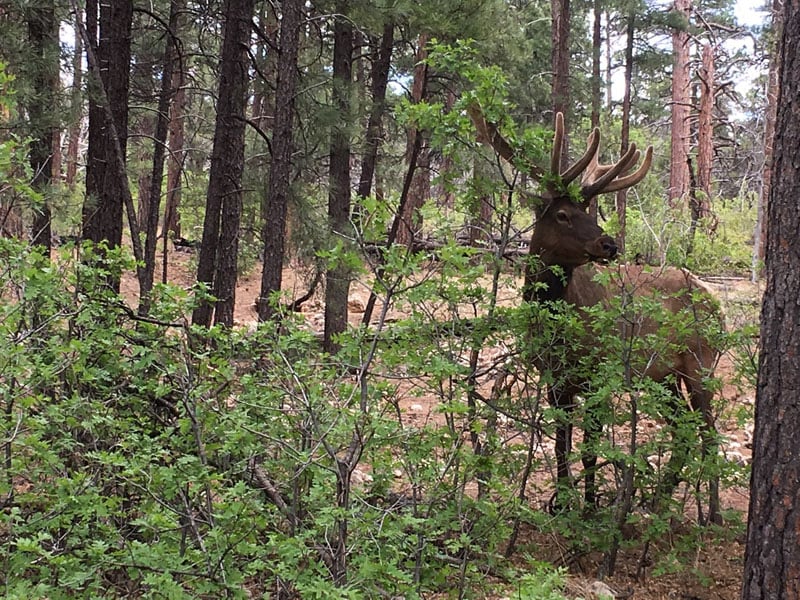 I stayed in the dispersed camping just outside the south entrance in Kaibab National Forest off the west side of the highway.  The next day I walked the rim going east from the headquarters to the visitor center, taking the shuttle bus back to the parking. 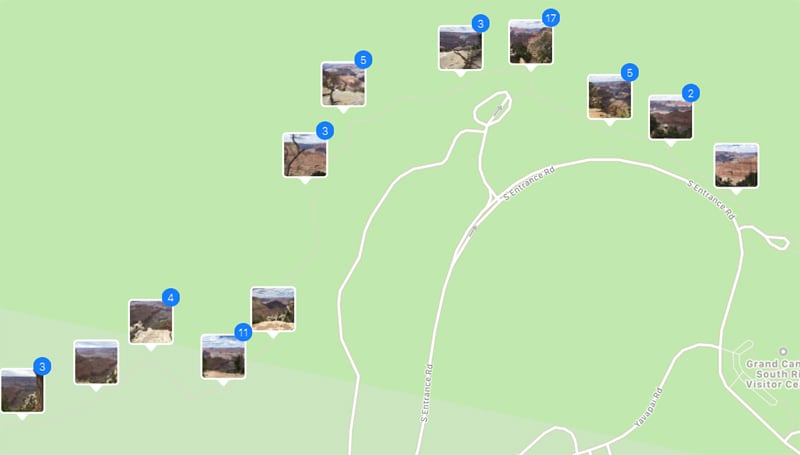 I then drove the road east stopping at the various spots.  The trees along the South Rim are short, thick and dense.  You can be 100-feet from the canyon’s edge and not even know it’s there. I enjoyed the twisted shapes of the trees. 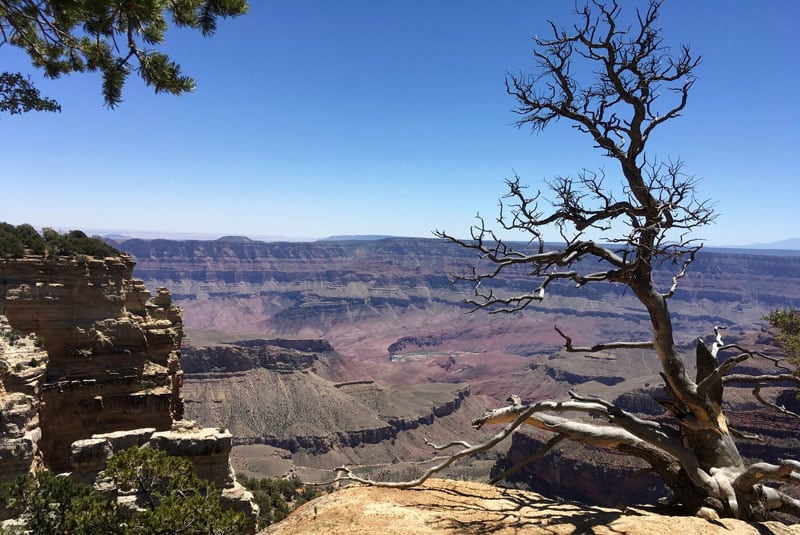 I went in February and could drive to all sites with no crowds. Everything is beautiful.

The South Rim campground offers sites with power for $15.  There is a bathroom with showers and laundry.  Only two of the loops are open in the winter.  When we were there, temperatures were in the low teens at night and the upper 20s during the day.

Bring along binoculars, a camera, time and a pad to sit on.  The rocks are cold in winter.  Take the time to really enjoy a sunset.