There’s no better way to find the best places to go truck camping in a given area than to talk to a local truck camper who enjoys truck camping close to home.  They often know the best sights to see, the best campgrounds or boondocking spots, and when to go for the best weather.  This is exactly the kind of information that can make the difference between a good trip, and a great trip.

Speaking of Nolan’s truck camping story, it begins, as so many truck camper stories do, with some howling wind, a flapping tent, a deflated air mattress, rocks, and a truck camper that happened to be camping near by.  You would think the truck camper industry plans these “coincidences”. 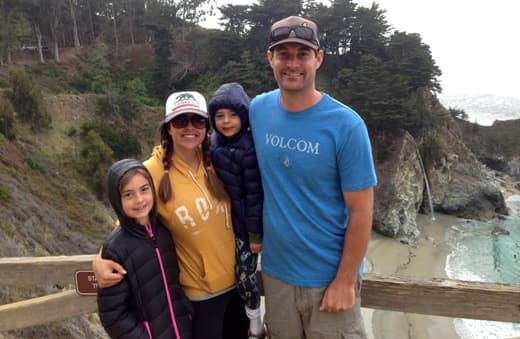 Nolan: I really got into truck camping when my wife, Kelly, and I first got married and we were pretty much over sleeping in a tent.

The trip that changed it all was a Baja surf trip in 2005 when our air mattress sprung a leak in the middle of the night and we ended up sleeping on rocks.  Also, the wind was howling and the tent was flapping around like crazy.

Above: Baja, California; realizing truck campers were the way to go

I crawled out of the tent in the morning with only a couple hours of sleep to see the neighbor in a truck camper who had pulled up right on the beach.  He had his cup of coffee in hand and was stretching out his arms ready to tackle the surf for the day.  He looked so well rested, and I remember thinking that I was never sleeping in a tent ever again!

When we got back from Baja trip, I went to the internet like most people and started searching.  That’s when I came across Truck Camper Magazine.  Before that, I always thought truck campers were all the same.  On Truck Camper Magazine, I learned that they are manufactured differently, with different materials, and there a lot of options available from pop-tops, to hard sides, to slide-out models.  Then you have to learn about payload capacity, camper weight, and matching.  It was a little overwhelming at first. 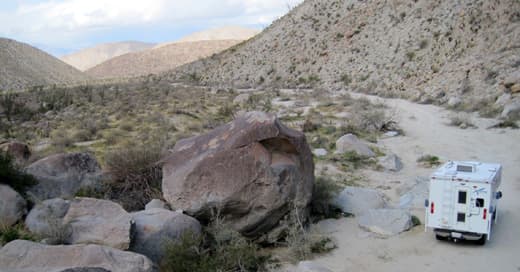 TCM: Did you already have a truck at the time?

Nolan: I had just purchased a Tundra, so I was limited in what camper I could get.  I went on Craigslist and started searching for a used light-weight camper.  I found a Sun-Lite Eagle for $5,000.  That camper was a good low-cost introduction to truck camping for us.  That’s about when my daughter was born.  The Sun-Lite Eagle had no bathroom, but it had a heater to keep my daughter warm.

We used that camper for a couple of years.  Then I realized I needed a four wheel drive vehicle for where I wanted to go and I wanted a hard side.  A hard side would also be more secure.  In the desert, where the wind can blow at sixty miles per hour, a hard side would give us more comfort.  We also go winter camping, so I wanted to have a four season camper.

That criteria had me looking at different brands.  I found a 2001 Ford F350 that was used as a plumber’s truck with a rack.  It was perfect because I was not worried about getting the truck scratched.  The F350 also offered much better payload. 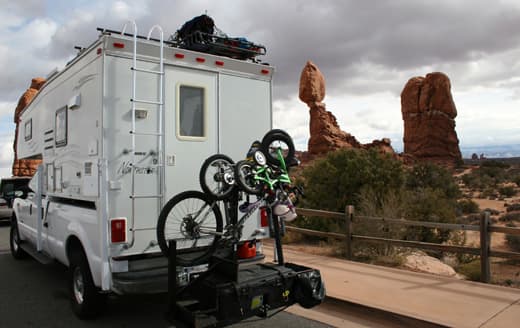 Once again I found a used camper that fit my criteria; a Northstar Laredo.  I actually bought it for not much more than I sold the Sun-Lite Eagle.  I loved the Northstar.  It was very well built and had a U-shape dinette.  We took a trip to Colorado Springs in the Northstar to visit my aunt and uncle.  During the trip we stopped in Arches National Park and Zion National Park. 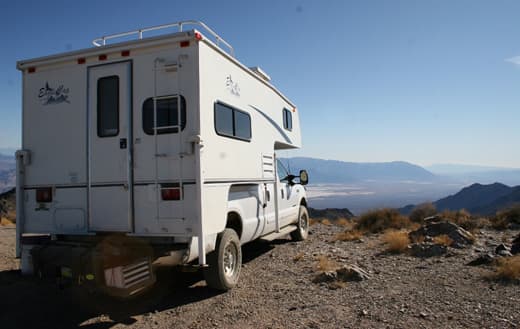 Eventually I decided I wanted a larger truck camper with an aluminum frame.  I put the Northstar Laredo on Craigslist and, once again, did well when I sold it.  Then I found our current Eagle Cap 800 Lite.  It was local and featured an aluminum frame.  It’s been a great camper for us. 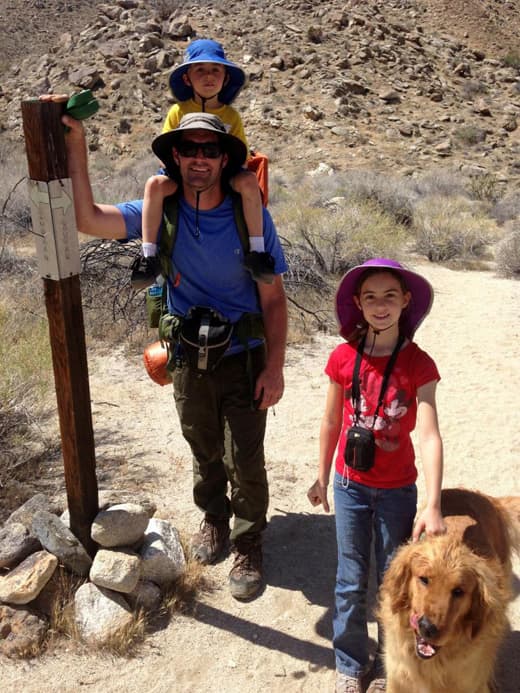 TCM: How do your kids, Brenna and Brett, like truck camping?

Nolan: They love it. We’re a very close family.  My wife, Kelly, will be home schooling our kids this year.  Brenna is in third grade and Brett is in kindergarten.

I am a Regional Sales Manager for a plumbing manufacturer and my territory is the western United States.  I often travel to the different areas I cover.  During the week, we have been staying in hotels. 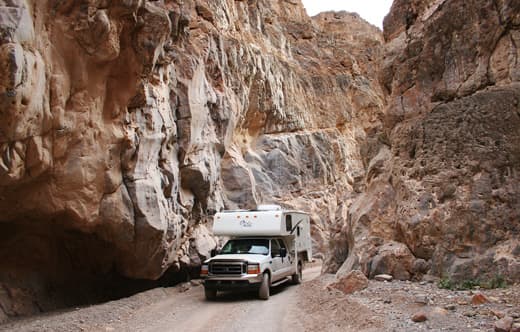 On the weekends, we go camping in national parks.  We just returned from Yosemite after being in Bakersfield and Fresno during the week.

When we’re camping, we’re outdoors.  We ride bikes, hike, and cook.  I’ll take the kids for a weekend so Kelly can have a break, and sometimes the kids go with grandma and grandpa and Kelly and I go out.

When we’re off-roading, I make the kids get out and guide me.  This helps them to learn the proper way to navigate through tough off-road areas.  It’s been fun to teach them how to navigate off-road.  Of course I ways make sure I can see them so they stay safe.

TCM: You also talked about using your camper to acclimate to the higher altitudes in the Sierras on your backpacking trips.  How does your truck camper help with that?

Nolan: When you are at 6,000 feet and above, you tend to get altitude sickness.  I learned that the hard way.  When we first married, I knew nothing about altitude sickness.  We live at about 1,400 feet.  We drove to Horseshoe Meadows which is up at 11,000 feet, and hiked to 12,000 feet right away to camp.  My wife threw up because of the altitude sickness.  The only cure is to go down lower and retreat.  Our trip was over, and we ended up going home.

Now we know what to do.  Most importantly, we stay hydrated, and camp at elevations below the main hike to allow our bodies to acclimate to altitude.

On the 4th of July, we got permits, took the truck camper out, and traveled to Horseshoe Meadows.  The heat wave hit on the way and it was 114 degrees in Owens Valley.  Up in the mountains, it was raining and cold.  Inside our camper it was warm and cozy.

During that time we were acclimating to the altitude.  We made a great meal on the stove, and drank lots of water.  We woke up the next morning, hiked, and felt fine.  We ended up summiting Mt. Langley the next day.  We have never had altitude sickness again.

TCM: You said that you go to the mountains, beach, and desert.  That sounds great for traveling year round.

Nolan: We typically try to go camping in the desert between Halloween and Easter when the weather is comfortable and we don’t have to run the air conditioning.  If we do, we have the Coleman Mach air conditioner and the Honda EU2000i generator.  We’ve also done early season desert trips using the heater.

In April and May, it gets hot in the desert so we start beach camping.  We also go to Laguna at 6,000 feet.  It’s a nice meadow with biking and hiking. 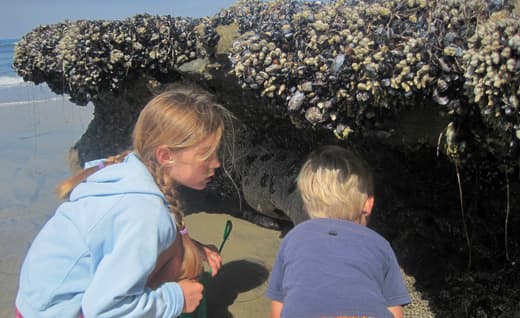 TCM: What places in and around Southern California would you recommend to fellow truck campers?

Nolan: For the beach, the ideal location is San Elijo State Beach in Encinitas, California.  It’s one of the only state beaches in California where you can get a beachfront site with hookups.   Another reason I like San Elijo State Beach is the access to the beach.  Some other state beaches limit beach access.  San Elijo has small bluffs and the beach is all sand.  It’s not a rock beach.  It also has a good surf break.

There’s a nice hike going north to see tide pools.  It’s not an easy hike, but it’s a nice stroll along the beach.  There are also a lot of reefs for snorkeling and you can go kayaking.  It’s also super close to Starbucks and grocery stores.  Plus, it’s right off the freeway so it’s easy to access.  The only negative is that there is a train that goes by.  If you are by the ocean, you don’t hear it as much.

Above and Below: Laguna Campground in Mount Laguna, California.  Click to enlarge.

For the mountains, I recommend Laguna Campground in Mount Laguna, California.  A lot of people camp there in tents.  It’s perfect for truck camping.  It’s dry camping and open year round.  When snow is in the forecast, we’ll go up there to watch the snow.  Laguna Campground also has amazing mountain biking trails.

For the desert, Anza Borrego Desert State Park in southern California is a truck camper’s dream.  I can’t believe I don’t see more truck campers out there.  On the first experience we had on the trails, I saw smiles on my children’s faces and I was hooked.  I fell in love with it.

There is camping everywhere in Anza Borrego.  Each time we go we try to see different areas and different parts of the park.  There’s rock art, cave paintings, ancient Indian villages, pottery shards, and palm groves.  There’s even a railroad that they made through the park.  It’s not being used now but there’s talk of it coming back.  There are tunnels and you can hike the longest curved wooden trestle in the world, the Goat Canyon Trestle.  That’s a very spectacular hike.

There’s an ancient fresh water lake, Lake Cahuilla.  There are clams, shells, and pottery shards along the shoreline.  Millions of years ago, it was an underwater sea, so you’ll find fossilized sand dollars.  Geologically, Anza Borrego has much to offer.

The book we use most is AFoot and Afield: San Diego County by Jerry Schad.  If you are ever coming to San Diego it is a must purchase.  Also the forum on anzaborrego.net is a great resource as well. 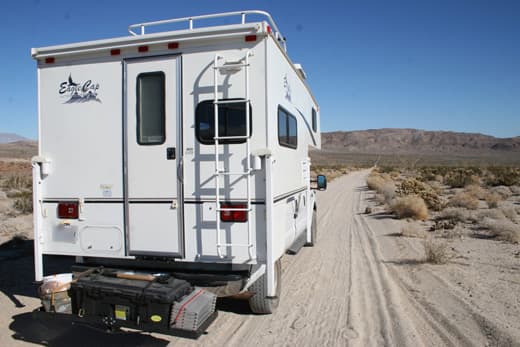 There are two main rules for remote camping.  First, you have to have your camp fire in metal container.  And second, you have to be one car length off the road when you camp.  That gives you unlimited camping options.  There are some areas where there is a sign where it says no camping.  They’ll let you know if you can’t camp in a specific area.

It’s worth noting that California requires a person pulling a trailer to only use the far right two lanes on the freeway.  You cannot use the HOV lanes pulling a trailer.  The two right lanes on the freeway are usually beat up pretty bad with lots of pot holes and bumps because all the semi trucks use them.  Having a truck camper allows use of the entire freeway system saving us many hours of travel time.

TCM: Anza Borrego sounds amazing.  We are definitely putting that on our bucket list.

Nolan: You really should.  We love living in San Diego and there is so much to do with the nearby desert, mountains, and beaches.  We rarely need to travel far.