Truck Camper Magazine experiments with a Goal Zero Yeti 400 Lithium portable power station and weighs the impact of lithium battery technology and integrated portable power systems on the future of truck campers.  Wouldn’t it be cool if…

I even drew this idea on paper for Angela to fully grasp my brilliance.  Naturally, she wasn’t impressed, a fact that our cat has celebrated ever since.  The thing is, Harley really needs this fast and convenient cat washing device.  He can get pretty ripe on the road. 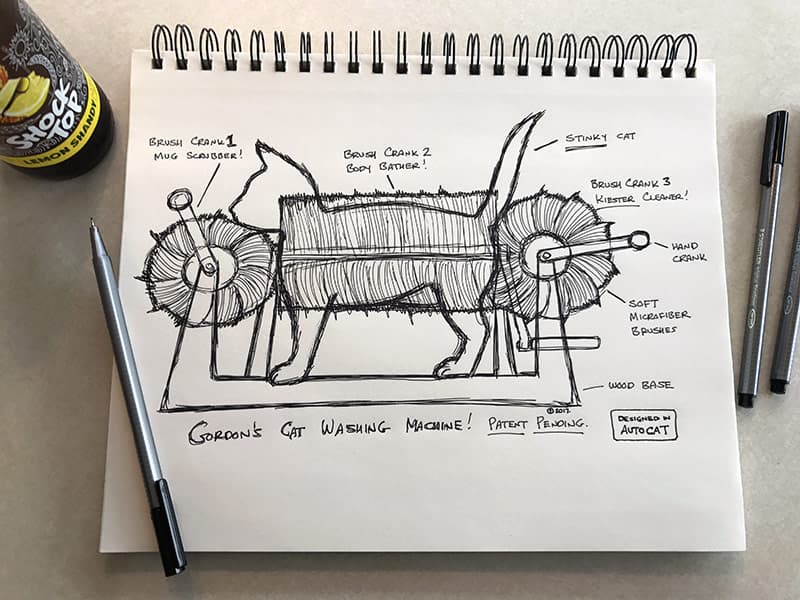 Above: My design for a hand crank portable cat washing machine.  Man do we need this!

Another one of my, “Wouldn’t it be cool if…” moments occurred shortly after we embarked on our second cross-country truck camping adventure.  This time we were working from the camper and found keeping our laptop batteries charged to be quite challenging.  Back in 2007, we didn’t have LED lights, solar panels, or two Group 31 AGM batteries on board.  We were practically Flintstone camping.  It’s a wonder we didn’t power our truck with our feet.

Anyway, we were parked at Panera Bread, a favorite of ours for lunch and charging our laptops.  We walked in, scoped out a table with an electrical outlet, plugged in our laptops, ate a meal, and worked.  Many Truck Camper Magazine articles have been written and published from Panera Bread.

Halfway through a You Pick Two, I said to Angela, “Wouldn’t it be cool if we could bring our camper batteries into Panera Bread, plug them into a 110-volt outlet, and charge our batteries while we eat?”  Angela actually agreed with this idea.  “That would be cool,” she answered.  Sometimes she gets me.

A decade after my portable power station epiphany, I happened upon a remarkable product from Goal Zero.  The Goal Zero Yeti 400 Lithium looked like an old-school lunchbox designed by the art department for Tron.  Called a, “portable power station”, the Goal Zero charges via 110-volt outlet or solar panel and then powers 12-volt, USB, and 110-volt devices off-grid.  Wait, that sounds familiar… 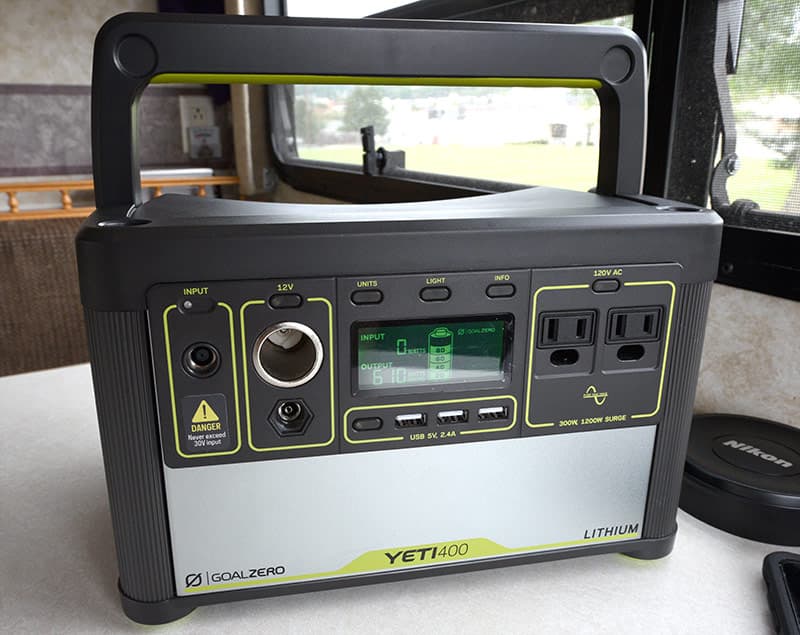 At just 17-pounds with a sturdy handle, I can totally see myself walking into Panera, ordering a half Bacon Turkey Bravo and Greek salad, and then nonchalantly plugging in my little Yeti under the table.  It took ten years for this vision to become a possibility, but man this really is going to be cool.

A few weeks later, a Goal Zero Yeti 400 Lithium arrived at my dad’s house.  We were parked in his driveway on our way to the North-East Truck Camping Jamboree in Lake George, New York.  After unpacking the Goal Zero, I followed the instructions and plugged the unit into 110-volt shore power to fully charge. 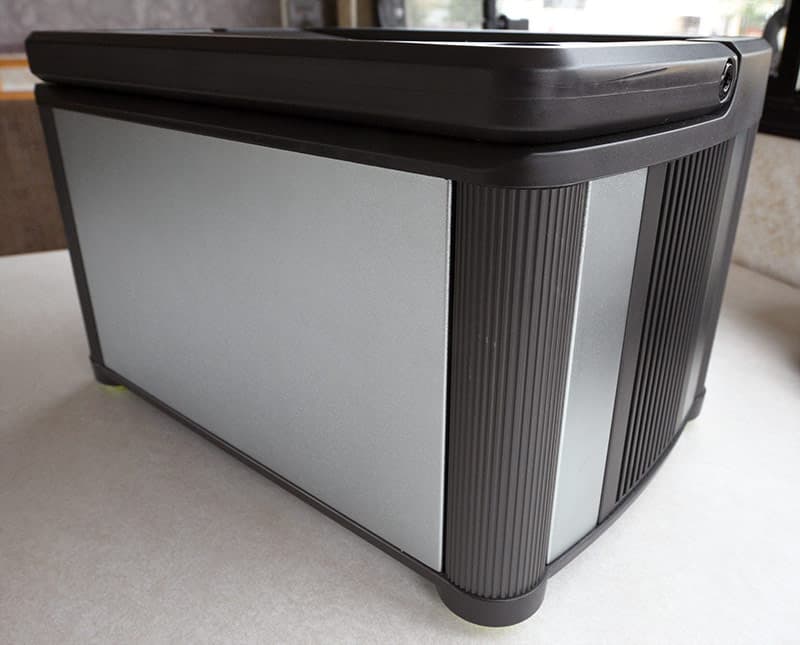 The Goal Zero is exceptionally well made with a clean design, intuitive presentation, tight seams, and a rugged build.  When I showed the Yeti 400 to my family they commented on how neat looking it was and talked about how it could be helpful when the power goes out in their house.

I was very pleased that the Goal Zero appeared ready for off-road travel, not to mention the relentless ga-dunk-ga-dunk of America’s neglected roadways.  My only wish is that the front panel and outlets had a cover seal for impact protection and dirt.  That nitpick aside, I was more than impressed. 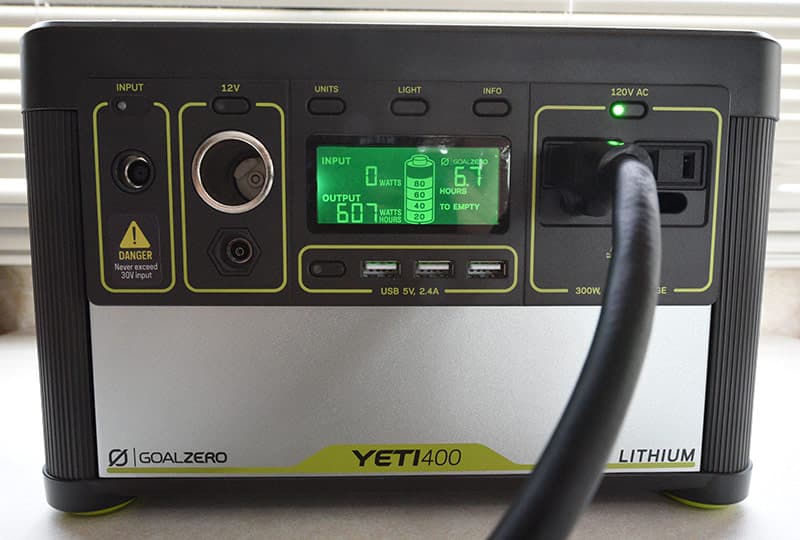 The Goal Zero Yeti 400 is offered in both lead-acid and lithium battery configurations – perfect for a lead-acid versus lithium showdown.  Let’s break these two Yeti masters down by price, capacity, weight, and size. 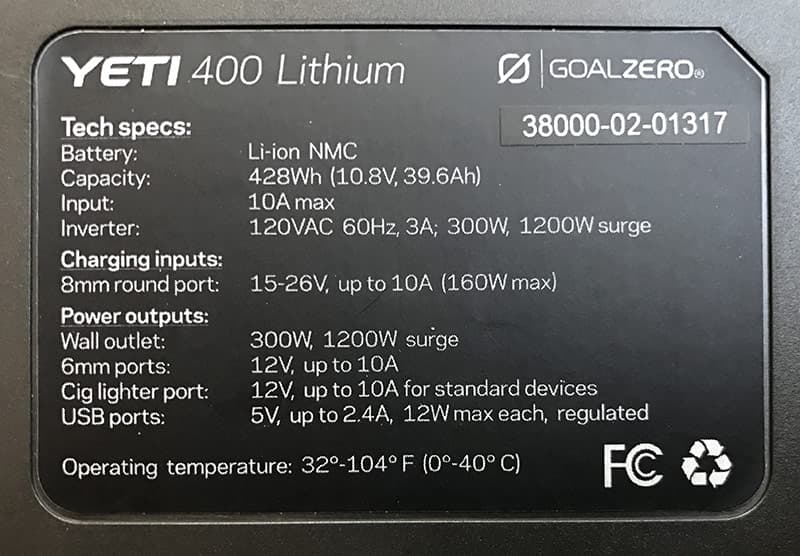 Lithium prices should come down considerably as lithium battery technology advances and production efficiencies continue to improve.  The Goal Zero Yeti 400 Lithium dropped $100 during the course of this evaluation.

The deciding lead-acid versus lithium factors for me were the lower weight of the lithium and the desire to learn more about lithium technology and its implications for truck camping.  Let’s explore these implications. 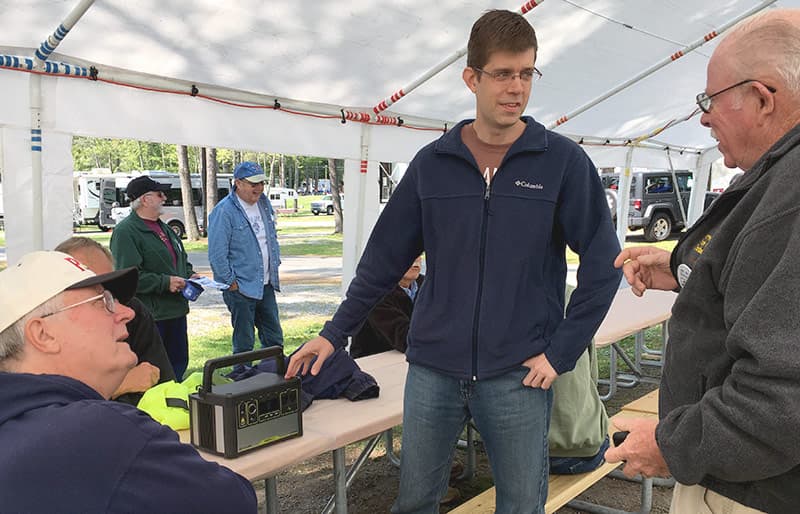 Above: Showing the Goal Zero Yeti 400 Lithium off at the Lake George Jamboree.

To find out how long a 110-volt device can be powered by the Yeti 400 Lithium (also called run time hours), you need a little math.  Take the watt hours of the Goal Zero Yeti 400 (400 watts) and divide that number by the wattage of the chosen 110-volt device.

I actually happened upon the Goal Zero Yeti via Ella Fitzgerald, Muddy Waters, and The Rolling Stones.  You see, I’m an incurable music nut who travels with a home-style stereo system tucked into the cabinetry above our dinette.  Naturally, I only use this 110-volt system when we’re plugged into shore power, but man do I miss my tunes when we’re off-grid. 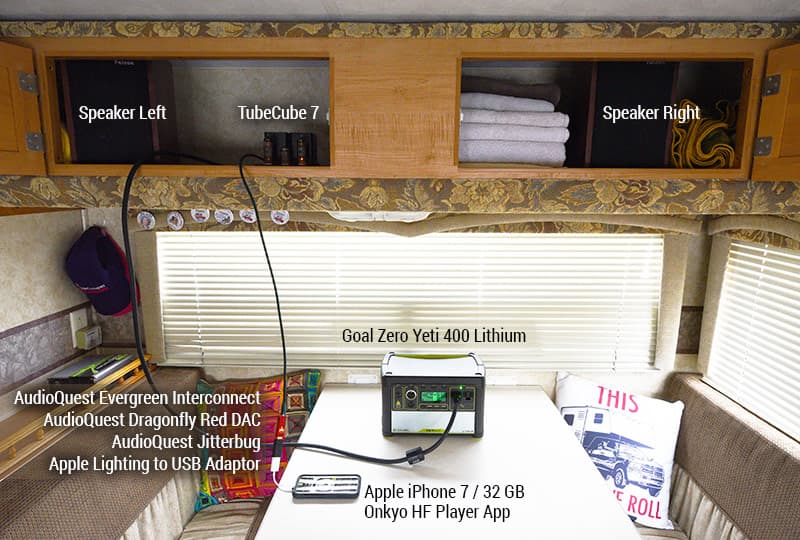 “Wouldn’t it be cool if I had a second self-contained battery system – 100-percent independent of our house battery bank – with a built-in 110-volt inverter for my stereo?”  Nobody heard me when I thought this, and subsequently searched Google. 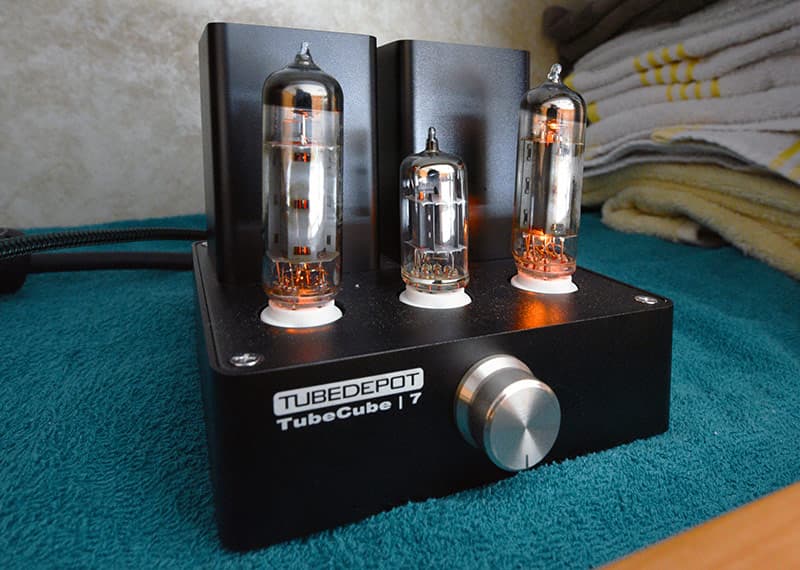 To calculate how long the Yeti 400 Lithium would power my tube amplifier (run time hours), I took the 38-watts the amplifier requires and plugged that number into the aforementioned equation: 400Wh/38 = 10.5 hours.  Boondocking with Bob Marley?  Sign me up! 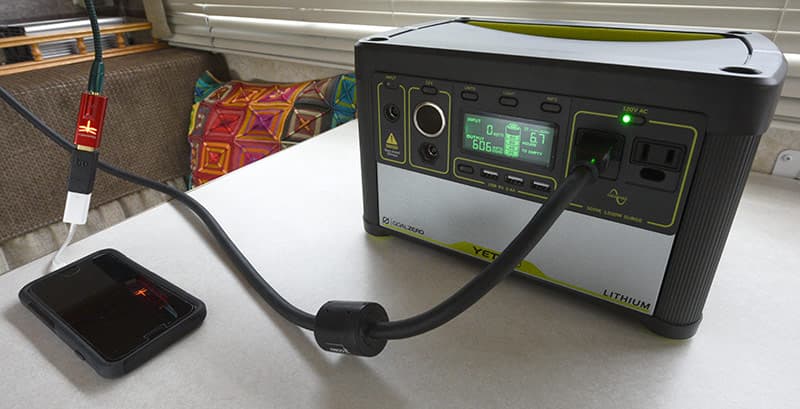 Then I started thinking about what the Goal Zero Yeti 400 Lithium was and how it could be used for truck camping.  My first thought was that it contained nearly everything some small truck campers need from an onboard battery system; a 39.6Ah battery, 12-volt, USB, and 110-volt outlets, and a 110-volt inverter. 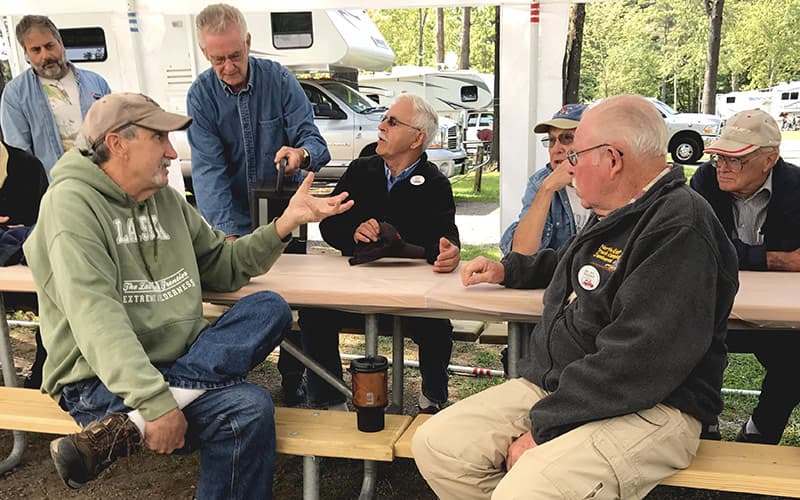 Above: Discussing the implications of the Goal Zero when truck camping

Imagine if you had a basic camper with nothing more than all-LED lighting, water pump, Fantastic Fan, and CO2 sensors.  With a 160-watt solar panel on the roof charging the Goal Zero off-grid during the day, the Yeti 400 Lithium might be all you need for a house battery, inverter, and outlets.  You could even charge your smartphone, tablet, and camera with the Yeti.

What if we add a propane furnace, propane refrigerator, and electric jacks?  Now we’re really pushing our luck with 39.6Ah on tap, especially if we’re running the heat at night.  Then again, Goal Zero does offer higher capacity Yeti Lithium portable power systems with the Yeti 1000 and Yeti 1250.  As lithium becomes cheaper and more powerful, the concept that truck campers might only need a portable power station seems very possible. 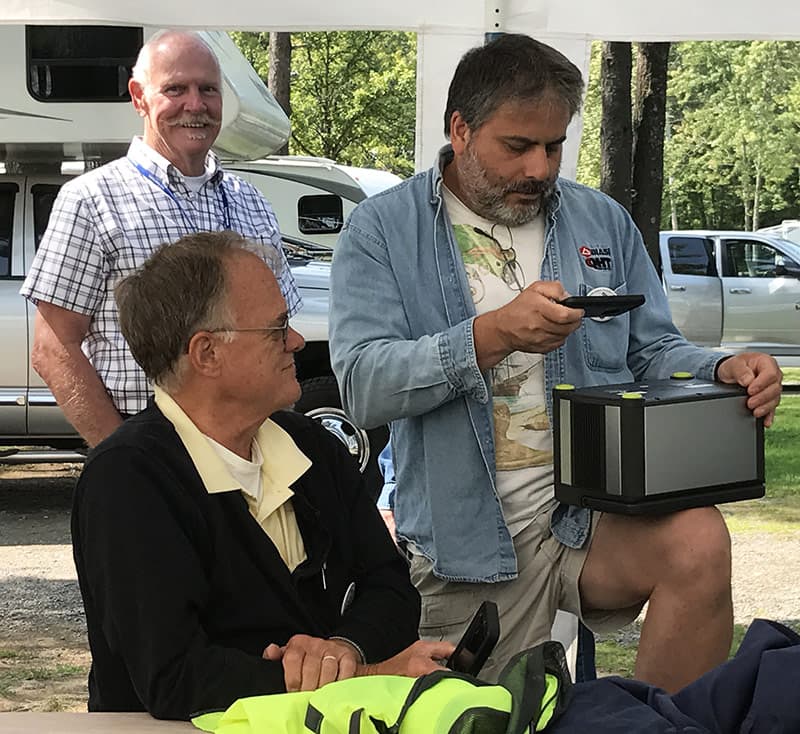 Besides, there’s no rule that says you can’t have two independent portable power stations – say a Yeti 1250 in the dinette area and a Yeti 400 in the cabover.  At a minimum, these are technologies – both lithium batteries and the portable power station concept – worth keeping tabs on.  The implications for truck campers and truck camping are compelling.

Go back about fifteen years and the only outlets you will find in a truck camper’s cabover are one 12-volt and one 110-volt on one side of the center wall.  These outlets were intended for the only devices most folks had in their cabovers back then; televisions.

How things have changed.  Today folks almost universally have efficient 12-volt flat-panel HDTVs and DVD audio-video systems.  Another change is the widespread proliferation of CPAP machines.  Just in the past decade, we have witnessed an explosion of CPAP machine usage among Truck Camper Magazine’s readership.

CPAP machine use triggered a loud and clear consumer demand for more 110-volt and 12-volt outlets in truck camper cabovers.  The majority of manufacturers got the message and have been incorporating cabover outlets for some time.  That said, not everyone has a new camper, and not every new camper has these outlets. 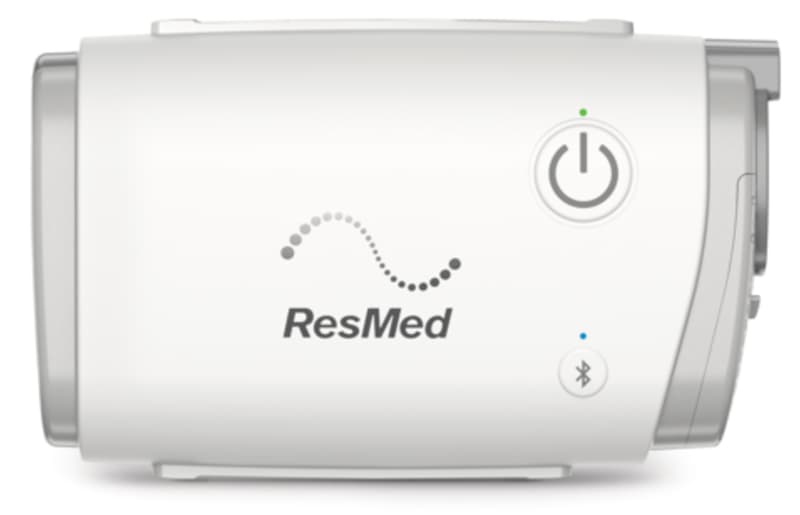 Above: The efficient ResMed’s Air Mini Travel CPAP machine is a good candidate for the Goal Zero Yeti 400 Lithium

Enter the Goal Zero Yeti 400 Lithium.  Can this portable power station really run a CPAP machine?  The answer is yes, but with some very important caveats.

First, you need the manufacturer’s 12-volt adapter for your CPAP machine (if one is available).  Running a CPAP from 12-volts is usually significantly more energy-efficient than running it off 110-volts.

Let’s say a given CPAP machine running at 10cm water pressure with the humidifier turned off requires 2 amp hours on 12 volts.  That’s 2 amp hours multiplied by 12-volts for 24 watts. 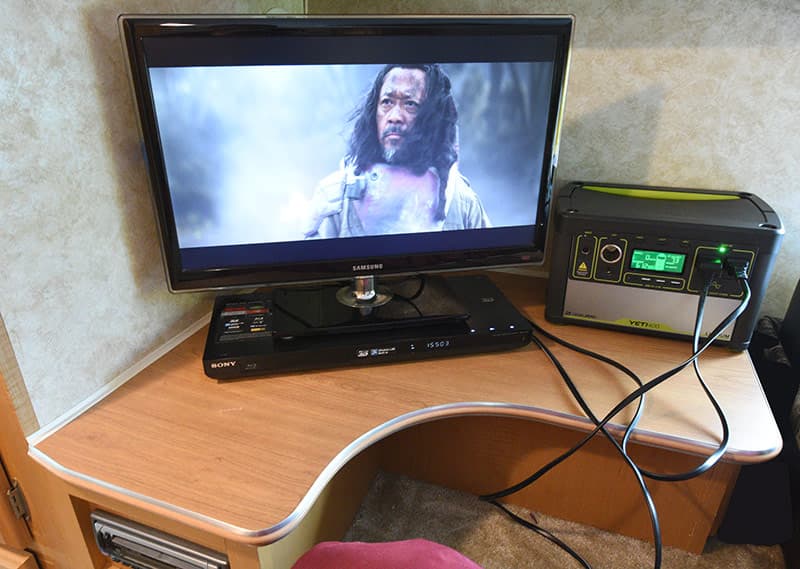 Above: Watching Star Wars: Rogue One on Bluray with the Goal Zero providing the 110-volt power.

Further exploring the use of the Yeti in the cabover, Angela and I have a 110-volt Samsung 24-inch HDTV and a 110-volt Sony Blu-ray player in our cabover.  When we’re off-grid, we have used a small 12-volt 175-watt Duracell inverter to watch television and movies, but recently this small inverter has been cutting out mid-movie.

We have a 600-watt Zamp inverter tied directly into our Group 31 AGMs, but that’s a lot of power to use for a two-hour film.  The Goal Zero 400 Lithium is a much better solution.  Last week we watched the movie Star Wars: Rogue One (133-minutes) off-grid on the Goal Zero without a hiccup.  The Goal Zero cooling fans turned on twice, but that was it.