Off-the-grid enthusiast Duncan Crawford takes the early adopter plunge, installs a fuel cell into his truck camper, and shares his portable hydroelectric experience with us.  Don’t forget the methanol.

Back in 2009, we met an enthusiastic team from Protonex at the National RV Trade Show in Louisville, Kentucky.  Protonex was showcasing a portable fuel cell designed for RVs.  As they explained the product, it would recharge a RV battery system via a hydroelectric chemical reaction.  As long as the Protnex system had Methanol fuel, it would keep your RV batteries charged indefinitely.

This was music to our ears.  Never ending power?  Yes, please!  The only catch was the price; about $7,000.  Oh, and the whole thing was rather experimental, not really available, and pending some approvals from various official entities.  It also turned out that you couldn’t exactly buy the required super pure methanol at 7-11.  It was a tease.

Fast forward four years and Duncan Crawford drops us an email.  Now Duncan is not your usual truck camper.  As an engineer, he’s owned three truck campers, each with a more advanced off-the-grid power system than the last.  He’s a master boondocker who loves remote locations where he can hike and canoe.  That means he’s done just about everything you can imagine to avoid needing to plug in.  Put another way, if there was something that could help Duncan extend his off-grid camping, he was all over it. 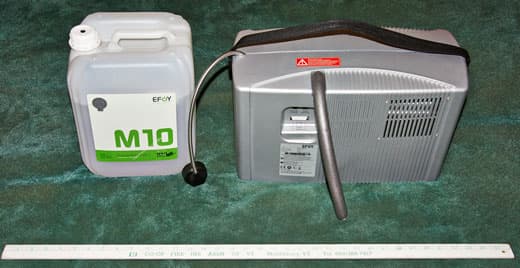 Above: Duncan’s fuel cell and fuel

So it came as little surprise that Duncan was the first person we know who now has a fuel cell in his truck camper.  That’s right, what was once experimental is now available.  Only it’s a German Company by the name of Efoy Comfort who’s supplying the fuel cells.  And the entry price has been cut in half.

After reading Duncan’s report and doing some further study, we still believe fuel cells are coming, but aren’t yet practical for most truck campers.  They’re just too darn expensive, especially when the cost of solar panel systems, wind generators, and portable generators have come down, and improved.  Additionally, LED lighting and battery technology has made strides in the past few years further curtailing the need for portable power.  Fuel cells are neat, but not quite there yet.

That said, we need to stay in tune with what’s out there and early adopters like Duncan are the best way we’re going to know how practical and effective new technology can be.  We need early adopters to prove the idea so the rest of us can follow, or flee.

What follows is Duncan’s experience of getting and using a fuel cell.  We hope to follow-up with him down the road as he learns more about the unit.  Thank you Duncan for taking the plunge and sharing with us.

Boondocking in a truck camper is one of the reasons people buy, and love, truck campers.  They also make great family emergency vehicles.

However, once you’re nicely ensconced in that secret place, you need to monitor and conserve water levels, holding tank levels, propane levels, and battery levels.  The real challenge, from my personal experience, is power conservation and battery levels.

The whole power issue came to a head for us last Fall when we met up with friends in Shenandoah National Park for a long hiking weekend.

The weather was was cold, with on and off light rain, and essentially no sun for our 160-watt solar panel system. 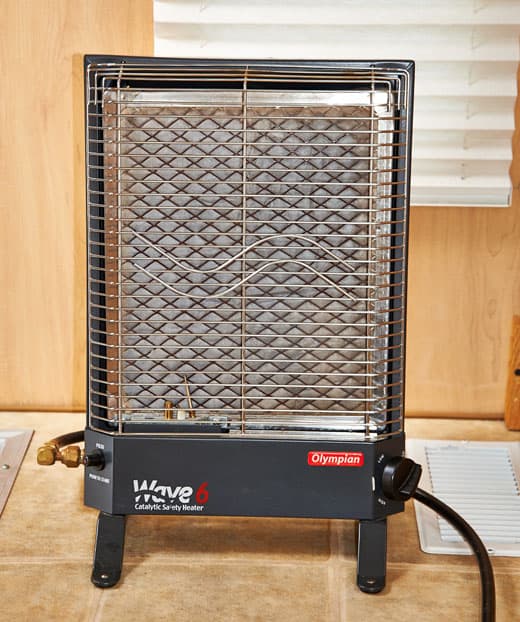 We used our Olympian Wave catalytic heater and LED lighting to minimize power use.

We have three lights of the type shown above, plus four reading lamp lights, the range hood light, and six closet lights.  All of them are LED.  If all of them are somehow on, we see a total draw of 1.9 amps, still less than that of one of the four dual fluorescent ceiling lights that came installed in the camper. 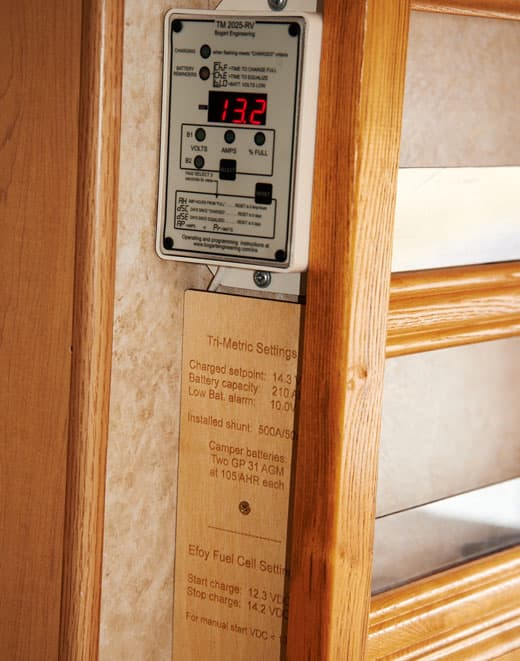 You’ve got to love the Tri-Metric for letting one measure stuff.  On our trip our batteries held out for a few days.

Thereafter we were idling the truck or running our generator to charge our batteries, which took time away from hiking and socializing with our friends.  That experience gave me the next, “really got to do something about this” project for the truck camper.

My research led me to the exciting (for an engineer) world of portable fuel cell technology.  In a truck camper application, a portable fuel cell is a nearly ideal automated battery charger.  You still need a generator to run a microwave or an air conditioner, but a fuel cell will keep your batteries charged when there’s no sun for solar, or wind for wind generators.  Properly packaged they even run in sub-zero temperatures.

Think of a fuel cell as part of an off-the-grid power system solution that includes your battery bank, solar panel system, wind generator, and gas/propane generator.

A fuel cell uses a catalyst to decompose fuel into hydrogen and carbon dioxide.  The hydrogen is then combined with oxygen from the air in an electrochemical reaction that generates electricity.  Unlike a battery which discharges stored energy and is then depleted, fuel cells will run indefinitely if a source of hydrogen and oxygen is available.  An internal charge controller monitors your battery voltage to cycle the fuel cell on and off as needed to keep your batteries charged.

The source of hydrogen in the fuel cells currently available for RVs is methanol.  More commonly known as wood alcohol, Methanol is regarded as an easy and safe fuel to store and allows fuel cell design to be miniaturized and operate at low temperatures.  Larger fuel cells can use propane or diesel fuel, but they require high maintenance pre-processing to remove poisonous sulfur, run at much higher temperatures, and cost north of $10,000.

The portable fuel cell unit I purchased is manufactured by Efoy Comfort in Germany and are widely used in Europe for RV and yacht power.  The company reports that 25,000 units are now in service with over eight-million operating hours recorded.  The technology is proven and certified for interior use.

The smallest RV ready fuel cells start around $3,500 for 80 amp hours per day and range up to $7,000 for 210 amp hours per day.  Clearly these are not yet inexpensive.  My advice is to minimize your electrical loads first, maximize your battery bank, add solar panels and/or a wind generator, and then consider a fuel cell to supplement.

The fuel cartridges are $59 plus UPS shipping (Hazmat fee applies) for a 2.5 gallon size and last up to 970 amp-hours of charging.  In practice that’s at least a month on the road per cartridge, significantly more if you supplement with solar.  They aren’t refillable, but can be recycled as plastic.

The fuel cells and cartridges are available in the United States and Canada through about a dozen or so dealers in the marine, RV, and industrial markets.

I chose a 65-watt fuel cell model, since that best matched our battery size and power use.  The weight of the unit is about sixteen pounds with fuel.

It kicks in when it measures a 12.3 VDC battery voltage, off of 14.2 VDC.  Both limits are user adjustable, but the factory defaults (what I use) are okay for any type of lead-acid battery. 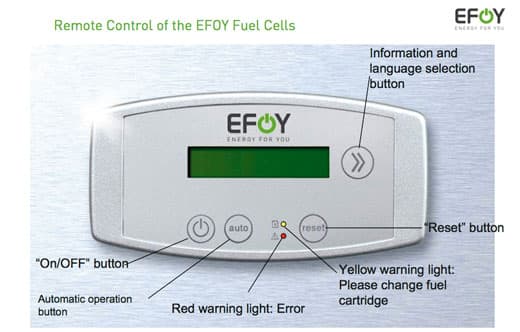 Above: The Efoy controller picture from the installation manual.  It shows the unit’s status; Automatic, Standby, or Charging, as well as the output voltage and current when charging.  You can also pull up the unit serial number and firmware version.  Firmware is field-upgradable, should Efoy release a new/improved one.  Typically that happens annually as a fuel efficiency improvement update.  There’s an error message display, and a reset button that’s used to clear messages and when you replace an empty fuel container with a full one.  The display only lights up when the fuel cell is in place and you push the info button, so pictures typically won’t show anything.

When the sun shines, the fuel cell remains in stand-by mode and allows the solar panel system to top off the battery charge to 14.4 volts.  All of this happens automatically after the twenty-minute start up phase.  Once started the unit switches between automatic and standby mode as needed. 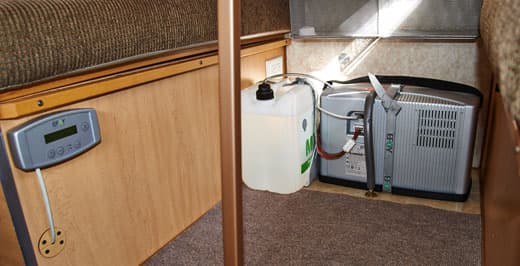 By installing the fuel cell under the dinette, cable runs to the battery box were simplified and the small fuel cell stack exhaust (the insulated grey line in the photograph above) vents through the floor to the outside.  A fan in the fuel cell unit circulates the air for the catalytic process and unit cooling.  This generates a little heat, something we enjoyed as the unit usually kicks on when the weather is overcast, damp, and chilly.

If the unit were installed in a closed exterior storage compartment, you would need to include a four inch diameter cooling vent as well as the stack exhaust.  An exhaust setup comes with the fuel cell package.  I stored these in case they’re needed for a future camper install.

The fuel cell unit itself is relatively quiet in operation.  It makes less noise than the camper furnace and is just barely audible from the cabover bedroom area.  When sitting at the camper dinette, the fuel cell makes a very low level hum which quickly fades into the background.

With the fuel cell installed, we are ready for our next road trip.  And this time, the weather will have no effect on our power system.