A truck camper’s cabover is sometimes quite a jump to get into, especially in the middle of the night.  Six Truck Camper Magazine readers share how they make getting in and out of the cabover easier and safer. 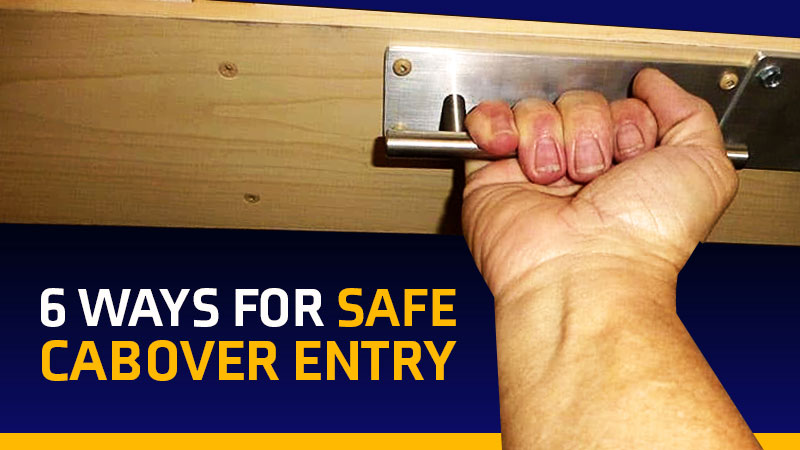 My wife and I are in our sixties.  Climbing in and out of the bed needs to be done with more caution and care.  I made a couple of carpeted boxes to lessen the height of the steps which worked, but could tip with a misstep. 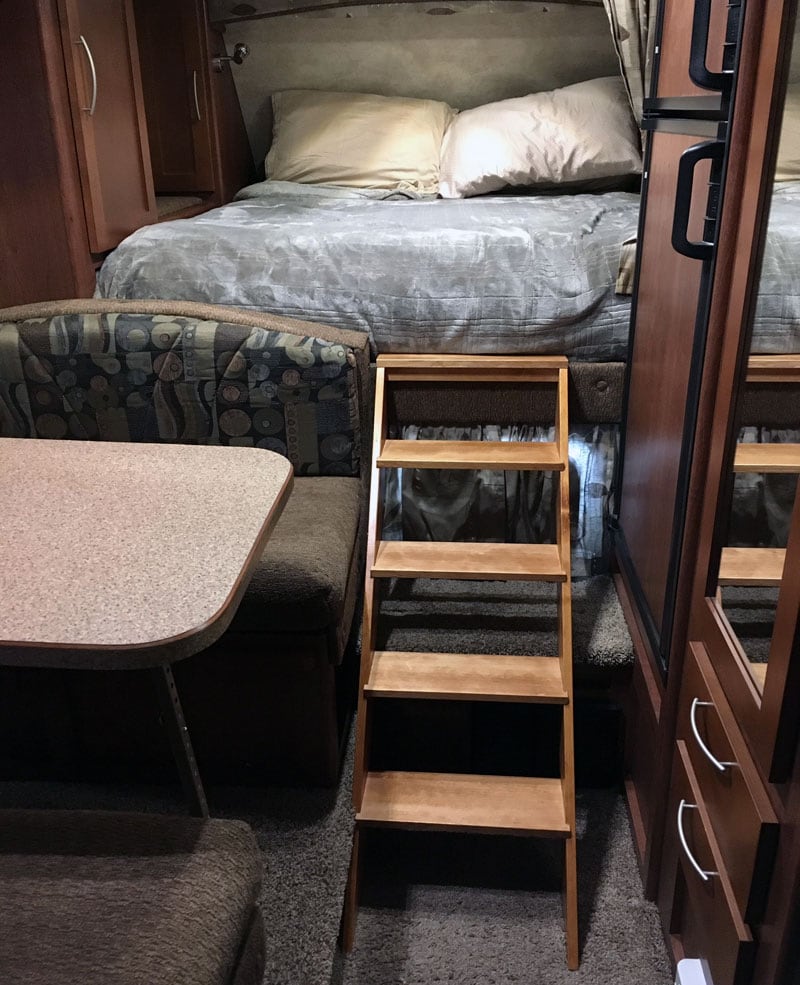 I decided to try to build something a little better aesthetically, easier to climb up and down, lighter in weight and easier to move out of the way to free up floor space.

I went over the plan with my wife.  She then tried to describe to me what she wanted.  I silently listened after which she said, “You will probably just do it your way.”  I proceeded with my plan.

I am far from being a master woodworker.  I just did what made sense and measured a dozen times before making my cuts. 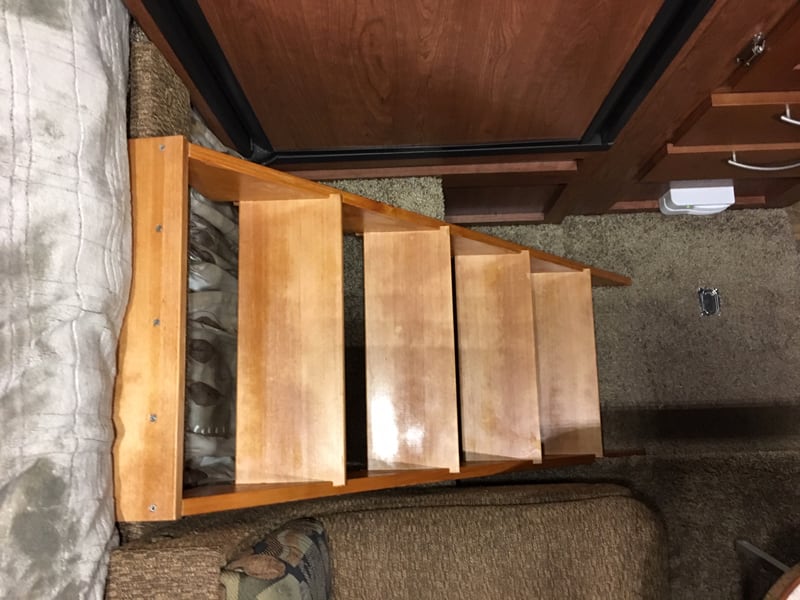 I used clear grained hemlock.  Tools used were a table and miter saw, a router, glue, clamps, and some insurance screws.  I finished it with stain and spar urethane.

It took me a couple of weeks working on it slow and steady.  The two coats of urethane also take forever to cure. 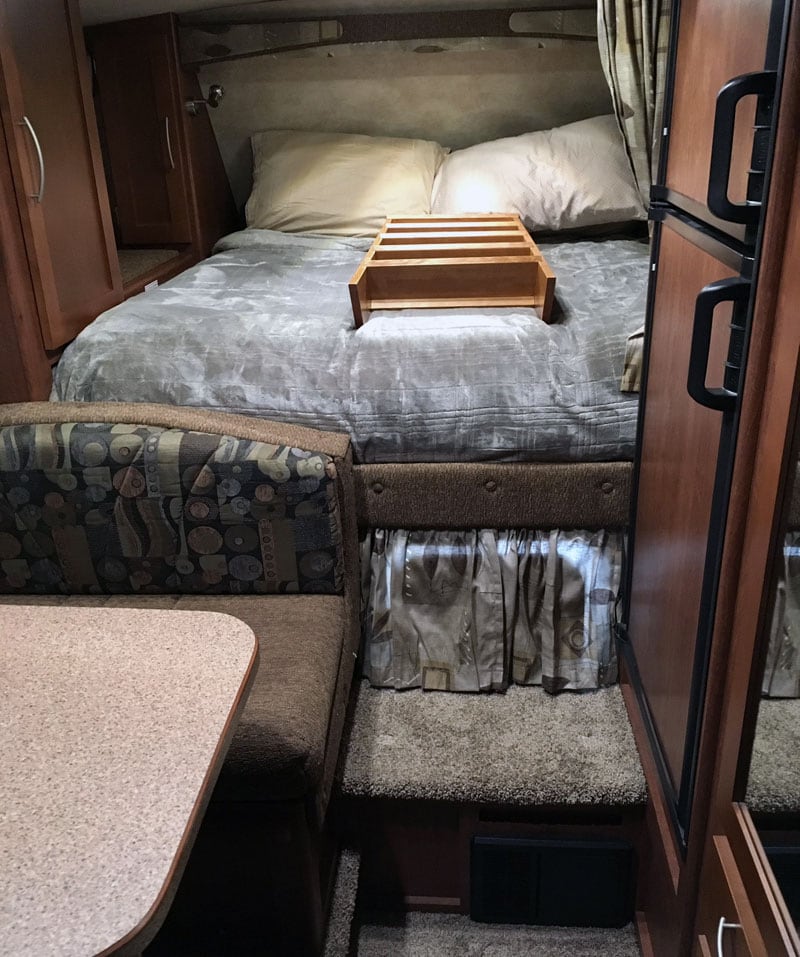 The top of the steps wrap perfectly on the footboard to secure it.  Removal is a simple lift and pull.  When it’s not needed I just slide it on the bed.  Since I am the first one up in the morning, I made it narrow enough to open the refrigerator a bit.

My wife tested it out and thinks I am a genius.

It took me 12 to 16-hours over two weeks to complete this modification and cost me $60 for the wood and urethane.  I bought a router and bit set at Harbor Freight for about $130.  I don’t see the router set getting a lot of use in the future.

In my opinion, the skill level of this modification is easy. 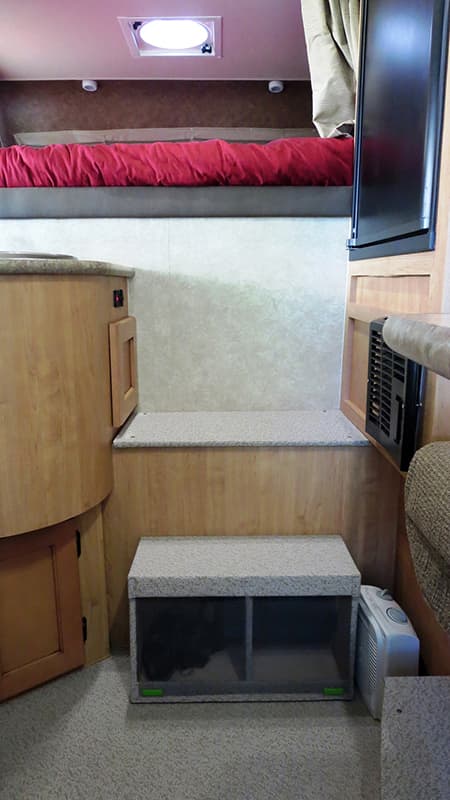 Our primary modification was a step riser for accessing the bed area. Yoly is not tall, so she has short legs. The initial 22.5-inch step up from the camper floor was difficult for me, let alone her. Coming down from the cabover’s bed area was actually harder than stepping up.

I could easily see Yoly, half-asleep in the middle of the night, getting up for bathroom access in the dark, misjudging the long drop-off, and falling. This simply had to be addressed. It also makes me wonder if the manufacturers camp in their own units. 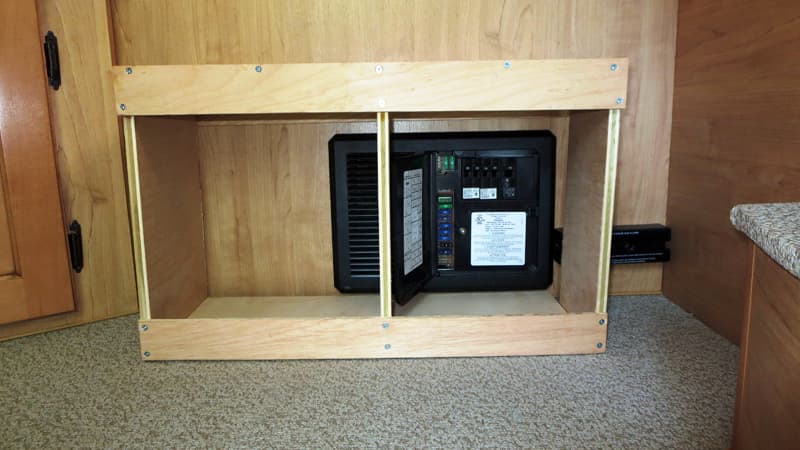 The step riser is constructed out of wood, glued and screwed together and covered with the same floor material as the OEM floor covering. 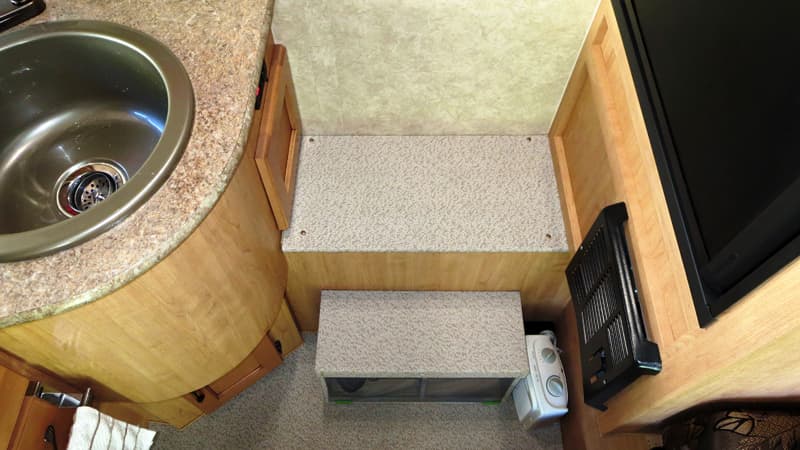 The step riser actually rests flat on the floor (full box section) so all our weight is carried by the floor itself. It is through-bolted with a 1/2-inch thick strip of birch laminate on the inside of the vertical wall section to locate and stabilize the assembly. 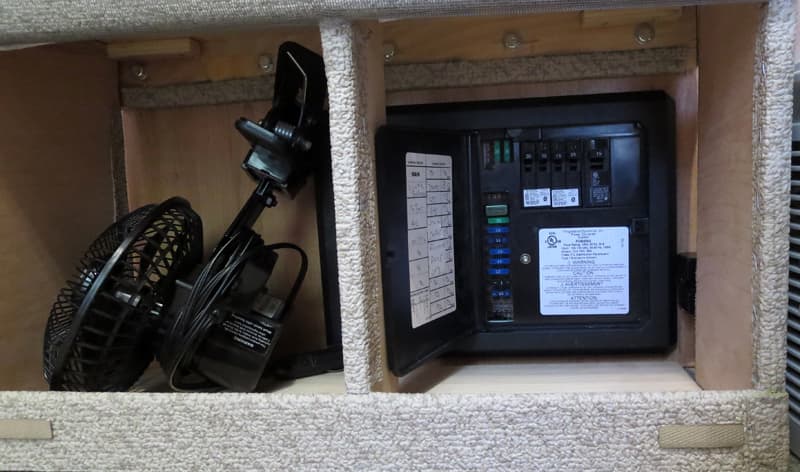 The step riser covers the converter, so it has an open front covered with soft screen material for proper ventilation and access. The screen is secured with two magnets at the bottom.

Here’s a video I made of this modification:

The step riser makes a world of difference! Getting up and down from our camper’s bedroom is now much safer and easier. Over fifty nights of camping and about 10,000 miles of use, it has been trouble-free. 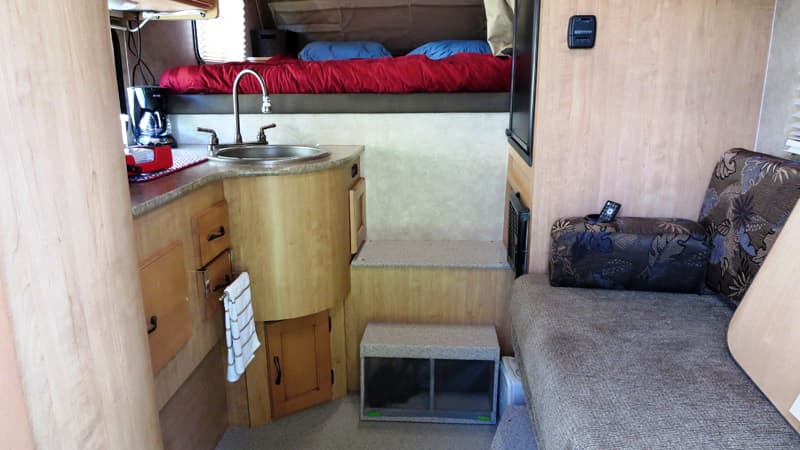 The step riser also makes a great little jump seat with back support. It can be utilized for sitting in a position that allows one to look out the back door while putting on shoes or boots.

In the Four Wheel Camper Hawk model, there isn’t a good place to grab when you’re getting out of the bed.  For us old guys, this is important for those late-night nature calls. 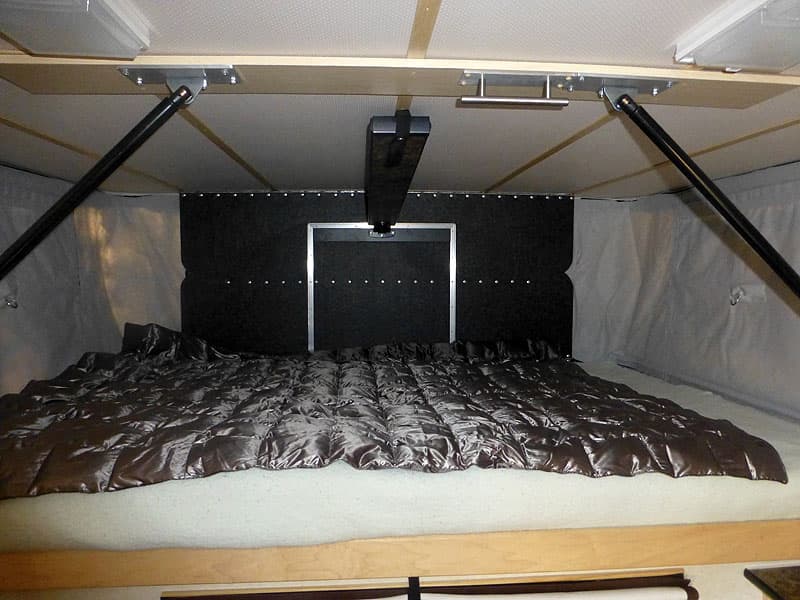 To address this, I added a handle to the push-up board over the bed.  I looked at just a large gate handle, but my wife said not in her camper.

So I found a nice looking stainless drawer handle.  I cut a piece of aluminum flat bar, drilled holes and countersunk the back for flush Allen screws. 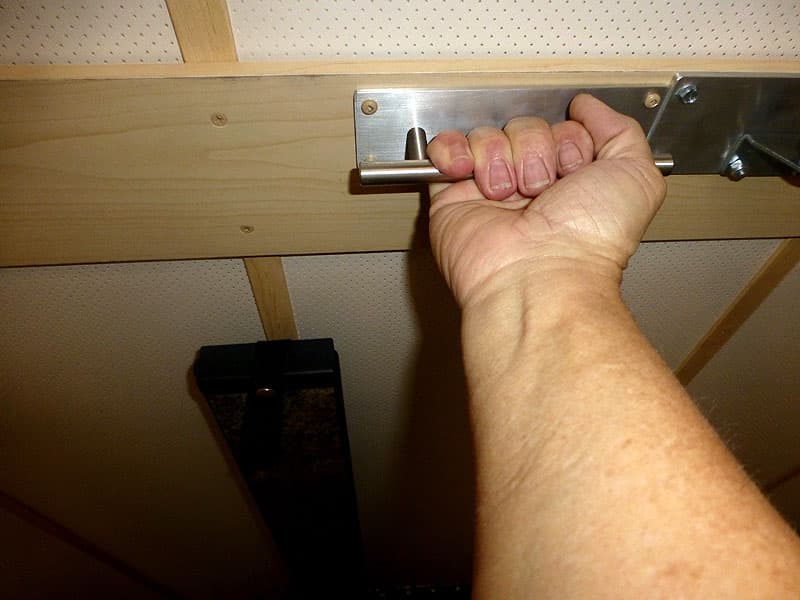 The handle is used every time we use the camper.  I’m not sure why I did not add it much earlier.

It took me less than an hour hours to complete and cost under $10.  In my opinion, the skill level of this mod is easy. 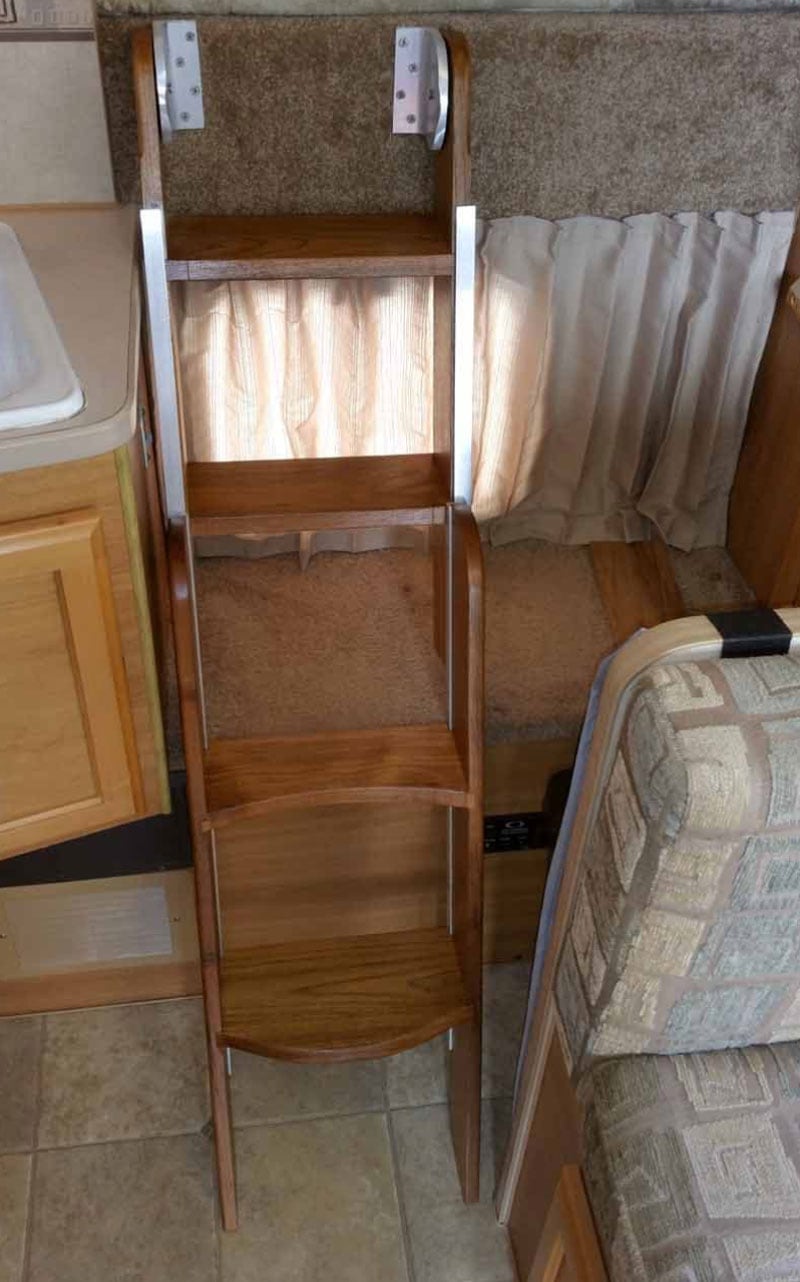 Above and Below: The steps going up to the overcab and coming down 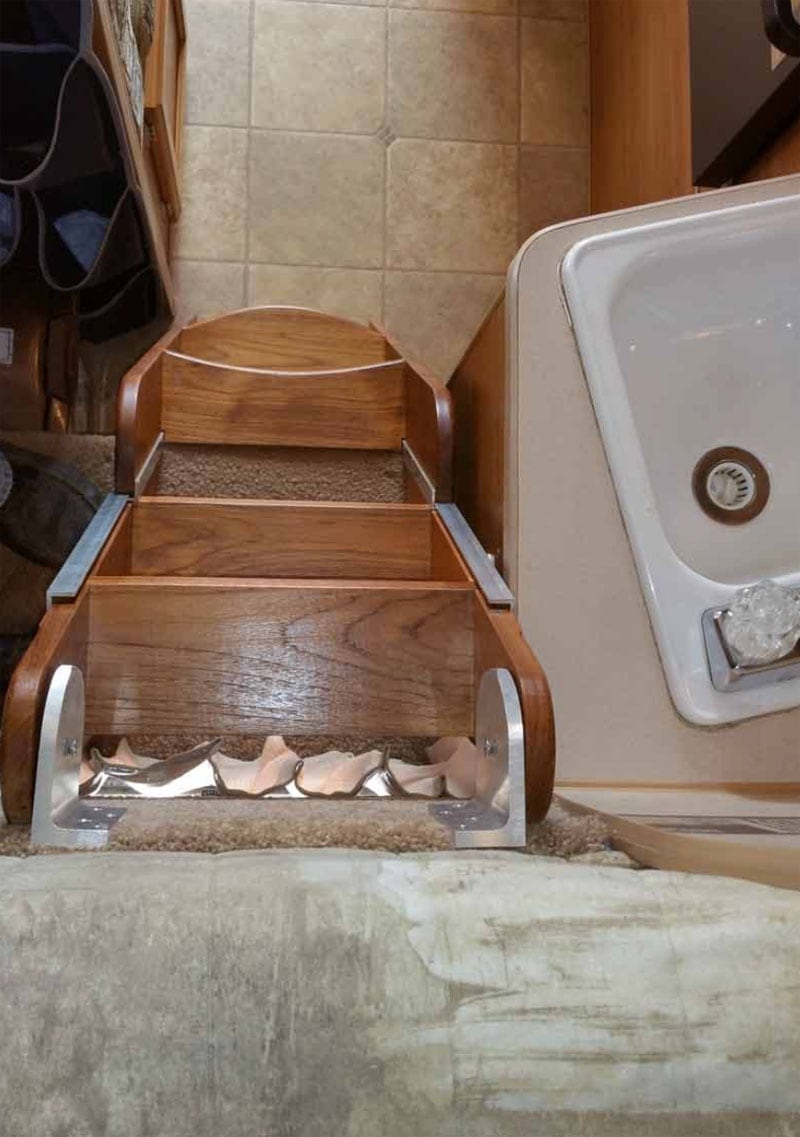 After both of us almost fell getting down from the bed, we decided the access to our bed in our Lance 845 needed to be easier and safer.

There were several considerations that we needed to work out.  We knew we needed the entry angle to be less steep.  We also needed the refrigerator door to be able to open all the way with our modification. 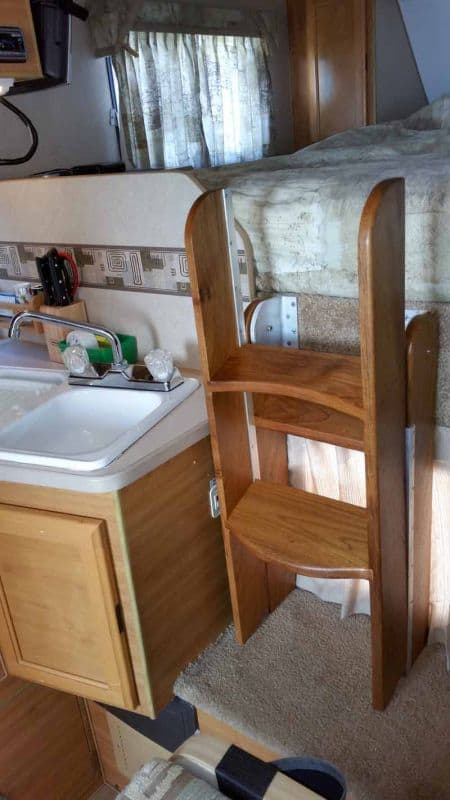 Above: The steps can be raised and folded when not in use

The following universal design is what we came up with.  The unit is a miniature extension ladder anchored at the top and can be pulled out and slid down when needed.  Then it can be raised and folded back when not needed. 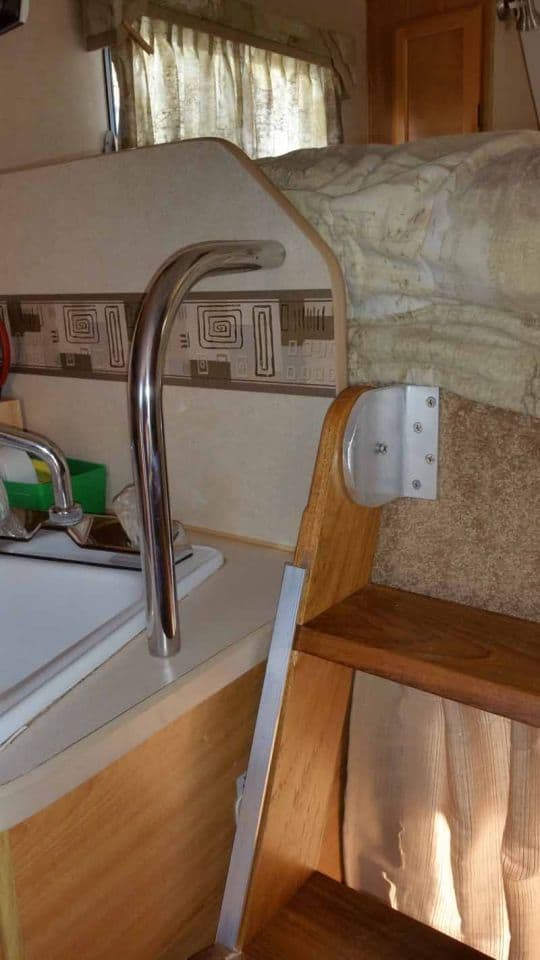 On a scale of 1 to 10, we both agree that it’s a 10.  All we have to do now is scurry up the ladder and climb on the bed now.  Coming down we just swing our legs over the end of the mattress and the steps are right there.  Even in the dark, it’s easy to find the steps.

It took me 20 hours to do the project comfortably, and cost $125.  In my opinion, the skill level of this mod is medium. 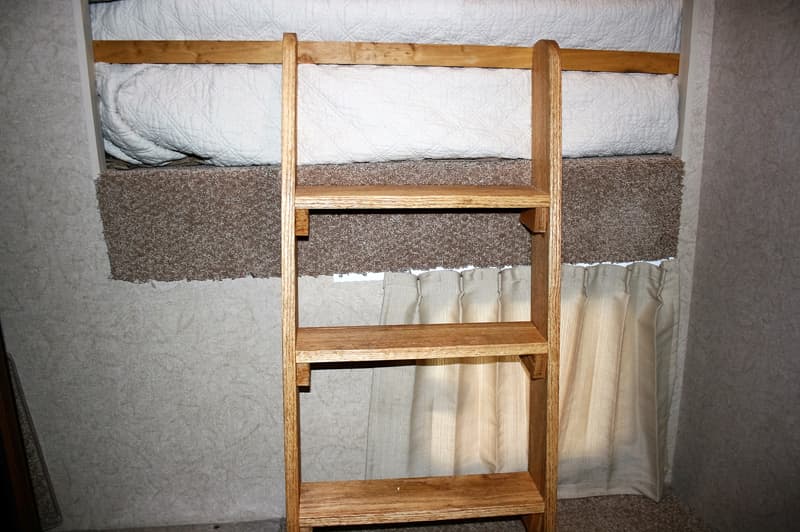 I made a three-step ladder for easier access to the bed and adjacent area.  Previously we had been using a fold-up footstool.  We are in our seventies and needed a little more height.  We also wanted something that would not turn over or collapse. 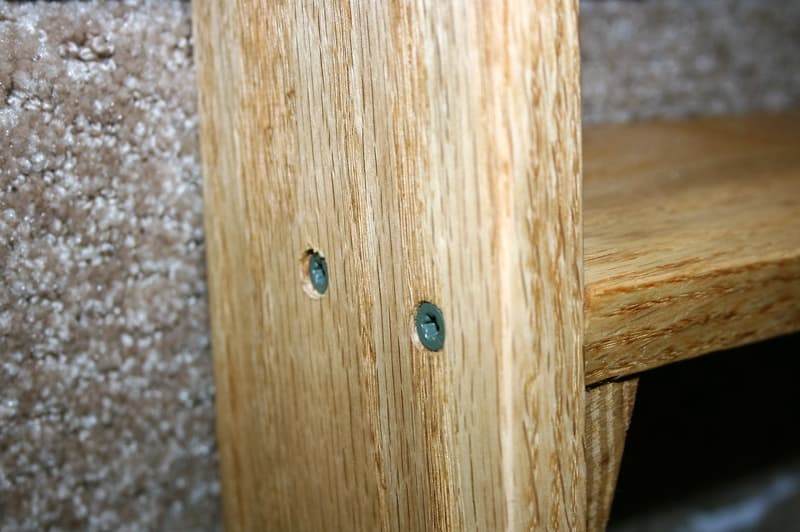 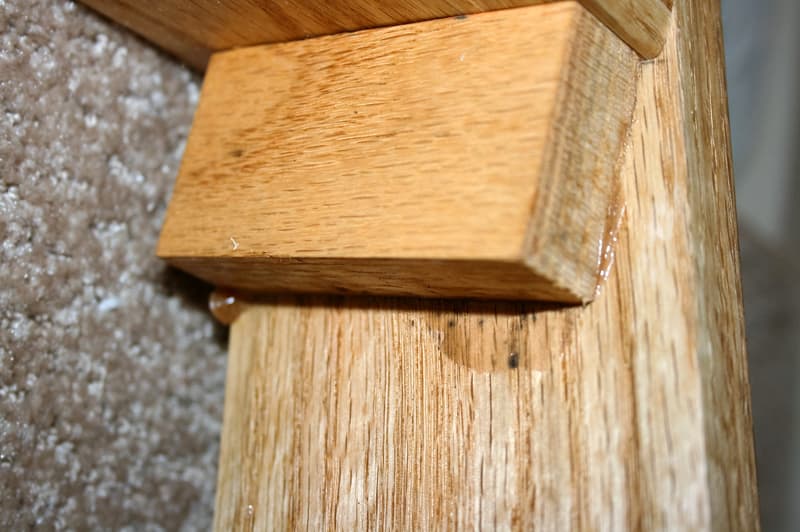 Since our camper has a large slide that comes in next to the bed area, the ladder could not be permanently attached.  From the same piece of white oak, I cut a brace 1.5-inches wide and 2 inches longer than the opening to the bed.  When installing it, I put one end of the brace (which is attached to the ladder with two-inch screws) on the right side between the mattress and the wall. 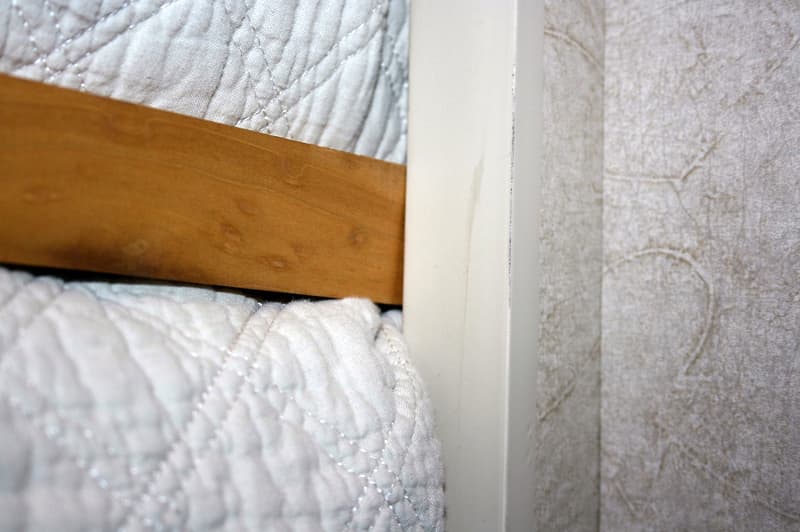 Then I swing the ladder up and into the area on the other end, pull it down, and press it down to the step-up area.  A slight bevel on the ladder is necessary and will be determined by the distance to the brace.  This might be different for different manufacturers.  When we are ready to close up, we remove the ladder and stow it on top of the mattress.

We have been pleased with the ladder.  It gives us several steps to the bed area, instead of one step and some old muscles.

We have a 2016 Adventurer 80RB.  When getting out of bed, it was a huge step to the shelf and down to the floor – especially at night with no light.  Then, climbing back up again was a challenge.

I used an old step ladder and measured from the bed rail to the floor right in front of the middle shelf step.  After cutting the ladder to length, I used one-inch wide aluminum and fashioned a hook to attach to the top of each side of the ladder.  The aluminum hook would hook over the edge of the bed deck. 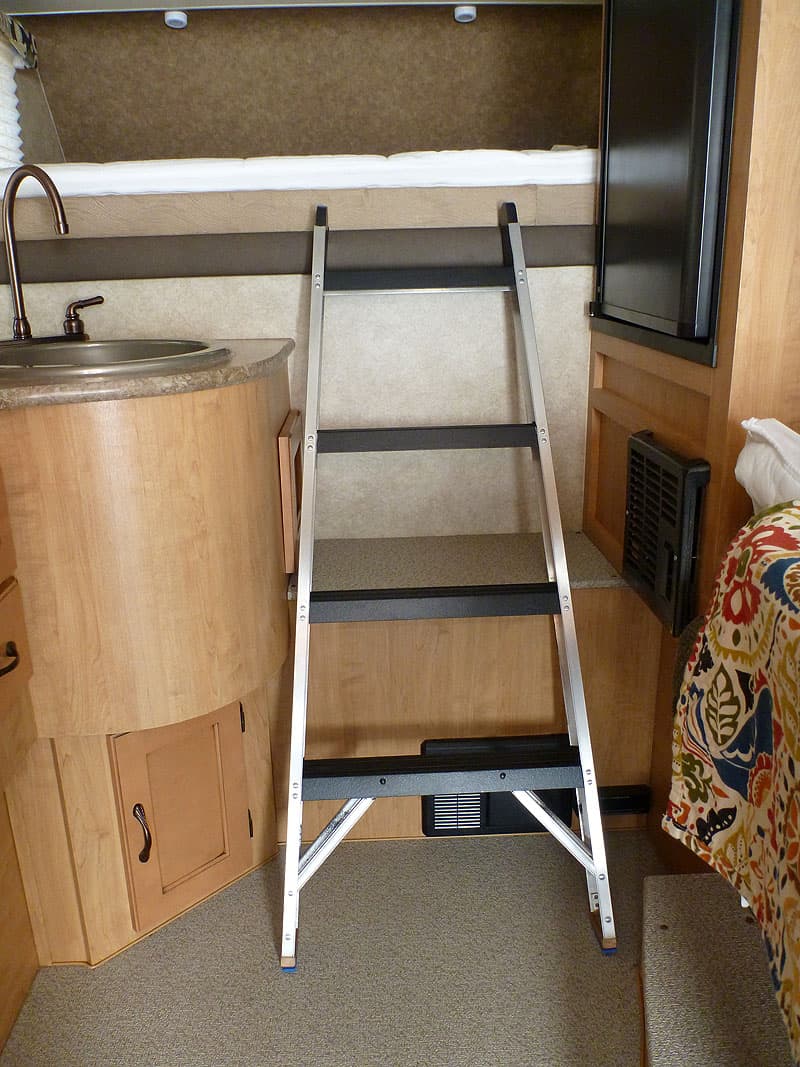 I then removed the rubber feet off the bottom of the ladder and added a one-inch block so that the step on the ladder aligned at the same height as the shelf step.  That way our foot was supported by both the ladder and the step.

Next, I reinstalled the rubber feet on the bottom of the ladder and coated the step with spray-on rubber to make it easier on bare feet and slip-resistant. 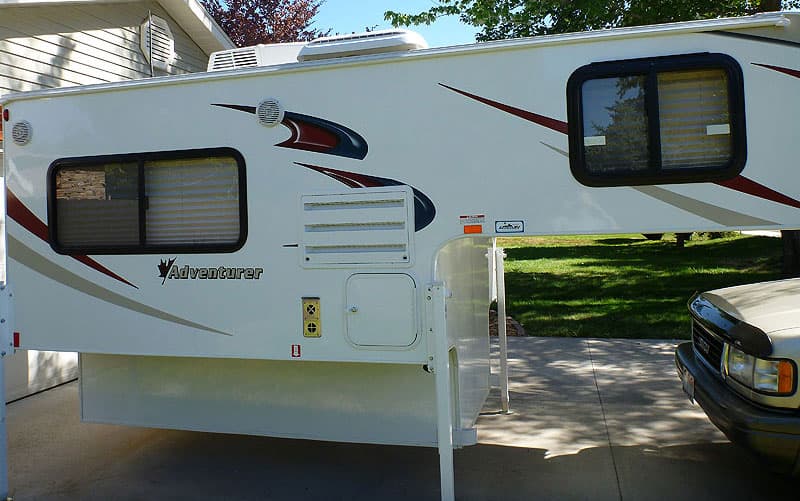 It works great.  No more climbing down backward-looking for the step and the floor. You just walk down the step either forward or backward with no problem.  The step is far enough to the side to allow opening the refrigerator without moving it.  If it has to be moved, it is so light that you can throw it up on the bed and out of the way.