The 2013 mod-rageous mod contest roll out bonanza continues with fifteen more inspirational mods.  Look under your dinette seat to discover what the runner-up winner has in store.

Welcome to part two of our four part 2013 Top Mod Showdown contest entry series.  The first three installments include runner-up $25 Lowes Gift Card prizes.  For the fourth and final installment, we will name the winner of the $100 Fuel Card Grand Prize, aka the Top Truck Camper Modder of 2013.

“The Arctic Fox 865 has quite a bit of wasted space under each seat cushion.  There is a piece of three-eighths inch plywood screwed to the seat base.  The plywood can be cut into two with one piece screwed down to the seat base nearest the wall.  The other piece has a hole in it to make lifting it up and out easy.

I built some boxes from quarter inch baltic birch ply that fit in the space under the seat.  The boxes on the 865 can be about four and a half inches deep and are a reasonable size to keep things that aren’t used every day.  The baltic birch ply is strong, light weight, inexpensive, and cuts and glues easily.  I left a cut-out for the twelve volt isolator switch.” – Jim and Anne Beach

“For us, the couch that came with our camper was uncomfortable and too high.  We also did not need the extra bed, so I decided to make a change.

I ordered two chairs with movable pedestals.  Both of these chairs swivel and rock requiring a little more room than where the couch was.  In order for them to fit on the slide floor, I had to build a hinged extension on the front of the slide floor and carpet it to hide the hinged part.  To bring the rear slide in, all you have to do is turn the chairs sideways up against the wall and then lift the hinged front off the floor.

I also built the small table that’s between the chairs, although I have changed it again.  I now have an end table with a collapsible table top and magazine rack, but no pictures.  This is a much better option for us than the couch.” – Dave and Dora Donovan

“I installed bamboo floors in the camper.  I never did like the carpet with all the sand from the beach.  I think the Lance 1191 looks great with the bamboo flooring.” – Gary Raymond 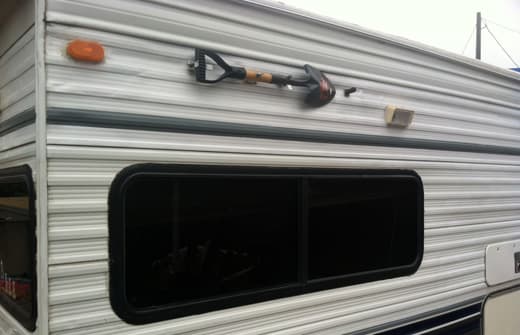 “Do you have a shovel and dents?  This shovel was added after dents in the siding were too costly to replace.  Plus, who doesn’t need a shovel to get out of the mud?  A short trip from the ladder to the roof is how you get your shovel.  Two clasps and a wing nut keep it firmly in place.” – Garrett Moreau

“We like to modify the camper to suit our needs.  The 2012 Adventurers had LED outside lights, but incandescent interior lights.  Job number one was converting all the interior lights to LEDs.  Now, if we turn on every light in the camper, we have the same electrical draw as turning on one and a half of the old lamps.

One downside is, after that was accomplished, the camper interior was too bright for our liking.  The interior light fixtures had clear lenses, and translucent white lenses were not available.  Our solution was to remove all the clear lenses, and softly sandblast the inside surface to create a frosted glass effect.  Perfect!  Now we have plenty of easy-on-the-eyes light inside!” – Bruce Allison

“My modification is rather simple and such a convenience in dumping our liquid waste.  All truck campers who have the dump valves on the passenger’s side rear should appreciate this mod.

I did not have a odorless area to store the hose out of my nose distance.  First, I bought a clear ninety degree elbow at Camping World and connected it to the camper waste outlet.  Next, I bought a ten foot and five foot Blue Line sewer hose and connected them together.  I taped the clamp with black rubber electrical tape.  Then, I installed a four inch perforated sewer lightweight PVC pipe underneath the rear area across to the driver’s side over the Blue Line sewer hose assembly.

Finally, I purchased a green slotted plug to fit into the end of the PVC.  I put a small strap across the end with silver type snap to retain it, and then I tied a short and strong piece of string to the slotted green cap and connected it to the bracket holding the PVC.  The green cap never touches the ground and is out the way when dumping.

The really nice thing about this idea is that the sewer hose is out the way of my nose and is easy to rinse out while encased.  It dries because the end of the hose is left open and the perforated outer pipe allows for massive air flow while driving.  The pipe, cap, and hangers were all purchased at Lowe’s.

With the fifteen foot of sewer hose from the passenger’s side to the dump, there are no problems and no handling the loose hose.  Just pull it out and it stretches to the dump station.  When it’s returned, it is easy to rinse out, close the green cap and move on.” – Bob Robinson

“I built four pole to Hi-jack adapters that are bolted to each of the Hi-Jack brackets.  They are fourteen inch tubular shower rods with a bolt on the bottom and an eye bolt on top.  Extendable camping poles are placed in each adapter and the tip of the camping pole is inserted into the grommet of a tarp.

A rope is attached to the grommet and thrown over the roof to be secured on the other side, hoisting the pole to lift the tarp and keep it high.  Since there are four adapters, I have the potential to have tarps extended on all four sides of my camper, but generally out to the two sides.

Not all campsites have the fire pit and table on the same side.  Having various sized tarps, I was able to create enclosed rooms with two sides screened to stop the wind, making for a nice evening sitting around the fire.

The Hi-Jacks are removed most of the year to save on weight, keep them clean, and there is less chance for them to be damaged in parking lots.” – Victor Smith 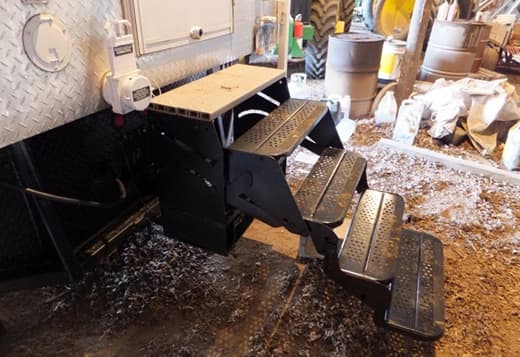 “I added a bigger and heavier step that folds up behind the back door of the camper.  It  still allows the use of a hitch receiver.” – Doug Baughman

“Here is the deck I built for our camper.  The deck is made out of 5/4 by four inch cedar.  I thought about using Trex or similar decking material, but decided it was too heavy.

The legs are adjustable for quick use, like a potty break.  We let it hang on the cables.  It takes just a few seconds to lower it for use.  It even has a little table that can quickly be mounted.  When towing the trailer it becomes an extension.” – Chuck Johnson

“I put in LED strip compartment lighting.  I did this to have instant on lighting in dimly or non-lit compartments.  It seems like I always need to hook up power or mess with tanks at night and I don’t have an extra hand to hold a flashlight.

I used LED strip lighting that I had left over from another project.  I incorporated a reed switch.  The lights are turned on by opening the compartment and they turn off automatically when the compartment is closed.” – Bill Felinski 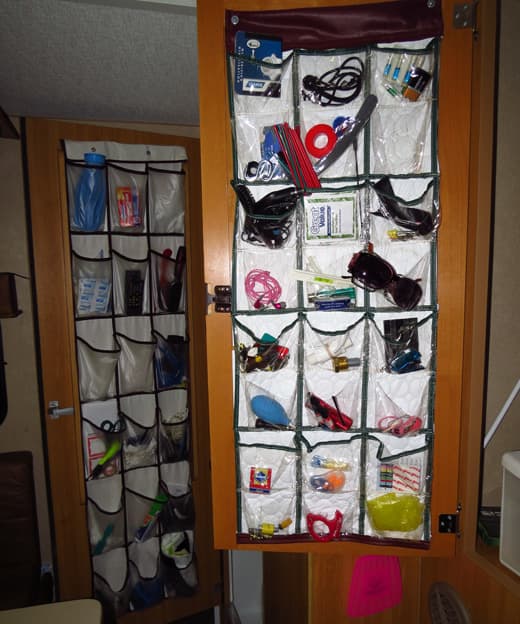 “I installed shoe bags on the insides of many of the cabinet doors in our truck camper.  They hold all the little stuff that the camper never seems to have enough drawer space to accommodate.

The pouches can be cut apart to fit any size door.  The clear pouches are best so that you can see what is inside.  The one on the short cabinet door has half sized pouches for really little stuff.

I sewed across the middle of each of the regular pouches and then cut each pouch underneath the stitching.  To hang the shoe bags,  I either use staples or screws with washers underneath.” – Shelley Pike

“I like the idea of having the Dish Satellite antenna on the roof of my camper, but also wanted it to be removable for placement on the ground for reception when I may be parked under trees.

Due to the design of the roof ladder on my Lance, the ladder mount designed for this purpose would not work.  So I decided to design and build my own mounting system.

I purchased some one inch box aluminum tubing and built the frame shown in the first photo and attached the antenna base plate to it as shown in the second photo.  The antenna came with the tripod legs that are designed to be used when the antenna is set on the ground and I was able to maintain that function as shown in the third photo.

By pulling the two pins (bolts), one of which is shown in the fourth photo, the two rails the base plate is mounted on (fifth photo) will slide forward and disengage from the mounting frame assembly.  Photos six and seven show the entire system installed on the luggage rack assembly on the roof of the camper. 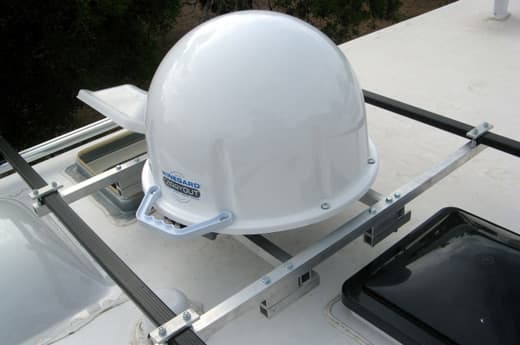 Now I have the best of both worlds with minimum effort involved in switching from roof mount to ground setup.  In several thousands of miles of travel I have had no problems with this setup.” – Eldon Rhodes

“Are you tired of the crappy tables that come in the typical truck camper?  Well here is the answer.  Using a Lagun table pedestal mounted to the wall of the camper, we now have no leg hanging down for the dog to knock down or to bash our shins on.

Using a pretty piece of wood, we put three coats of bar top finish on the table and now have a perfectly smooth and spill proof table top to match the Lagun pedestal.  The picture also shows how the table is pivoted to the side for easy access to the bed or to sit side-by-side and watch a movie.  Notice that it can articulate to the side, as well as up and down using ratchet levers.” – Carl Isner

“This mod is a upgrade in the way the bumper is fastened to the camper.  When I bought the camper in late 2011, the bumper was loose.  I tried to tighten the way it was mounted, but it didn’t seem to help.

I have a fabricator down the street.  He and I looked at it and decided on how to fix the problem.  The way the bumper is attached is the same but he made these brackets to attach and transfer the weight of me to the jacks instead of the camper.

This works really well.  The bumper is very secure now and I have no issues with it.” – Jeff Hagberg 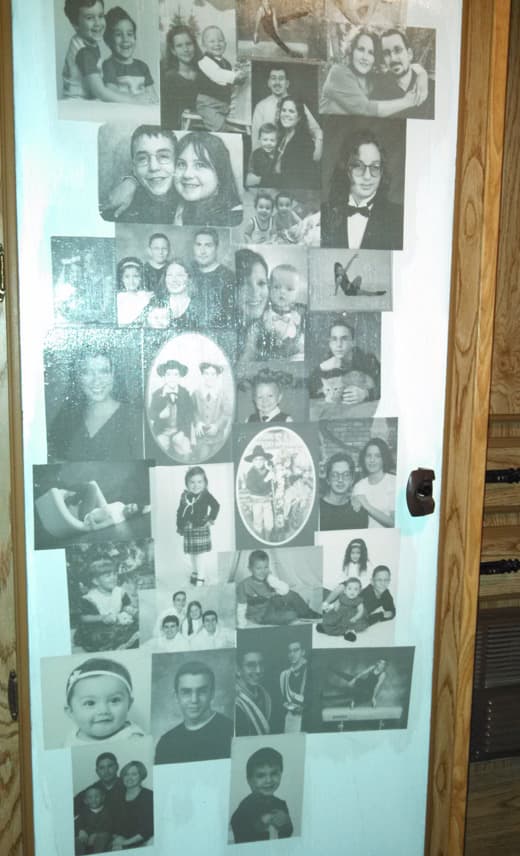 “We are full timing in our truck camper and wall space is at a premium.  We didn’t want to leave all our family pictures in storage, so I made black and white copies of them. The bathroom door was our biggest flat surface.  I painted it white and then I cut out each picture.  Then I placed the pictures randomly on the door and used Mod Podge to seal them to it.  As you can see, we still have room for more pictures of our newest grandchildren and any future ones!  We get to look at our family while we’re sitting in our dinette booth.” – Ken and Lynn Gillespie

Disclaimer: It is your responsibility to make sure that any do-it-yourself modification project you undertake is safe, effective, and legal for your situation.