What happens when you get thirty-six truck campers, eighty-one lobsters, and twelve pounds of butter in the same place at the same time?  Four days of shenanigans!

The following report is a true and accurate account of what transpired at the 2012 Truck Camping Jamboree Lobstah Bash.  In this first installment, we detail the activities and various goings on that occurred.  We will follow-up with a detailed write-up and review of the 2012 Ford F-350 SRW 6.7 diesel and a 2012 Northern Lite 9-6 Special Edition rig we borrowed for this mission.  Brace yourself fellow truck campers, this one is a lulu. 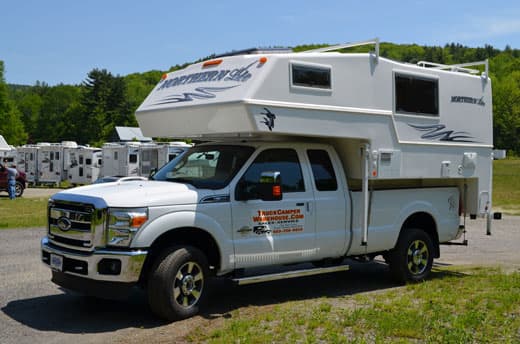 We arrived at Truck Camper Warehouse the day before the jamboree to pick up a 2012 Ford F-350 SRW 6.7 diesel and a 2012 Northern Lite 9’ 6” Special Edition.  Bill Penney, Owner of Truck Camper Warehouse, came in with his crew on their day off to put the rig together for us.  Thank you Bill, Ryan, and Jessi.

Talk about an absolutely beautiful rig.  By the look on Angela’s face I could tell what she was thinking, “We might return this rig.  Then again, we might not”.  Angela has long had a deep affinity for the Northern Lite Special Editions and it’s easy to see why.  The truck was no slouch either with its Lariat trim package and air conditioned electric seats.  After driving our 1998 Dodge 3500 for the past five years, the 2012 Ford F-350 feels like a truck from the future.

Once Bill and his team were done preparing the rig, we unloaded a car full of food, clothes, and other camping supplies into the Northern Lite.  We had dinner, enjoyed a terrific lighting storm, and enjoyed an evening in the luxurious interior.

This was the beginning of something Angela and I had been talking about for at least five years.  This was the first time we had the opportunity to actually camp in a Northern Lite.  Would the Northern Lite Special Editions retain their vaulted status in Casa Blanco after a few days of real world truck camping experience?  It was finally time to find out.

The next morning we woke up, made breakfast, and hit the road.  It was day one of the 2012 Spring Lobster North-East Truck Camping Jamboree, the Lobstah Bash!

Angela wanted to see the coast before arriving at the campground so we cruised the 1A in New Hampshire to Hampton Beach and pulled over to have lunch.  The lobster boats were moored in the water a few hundred feet off the side of the rig in what would have been a picturesque New England scene if not for the power plant in the background.  No wonder the lobster had that extra zing. 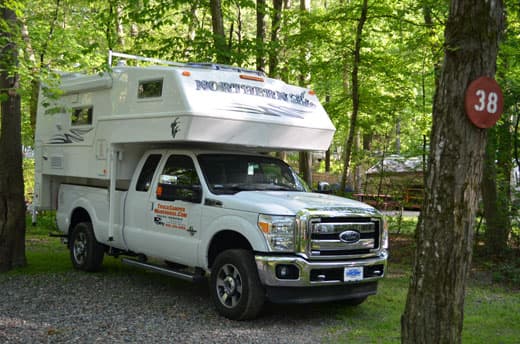 We arrived at Pines Camping Area in Salisbury, Massachusetts about an hour later.  The campground was initially a bit convoluted, but we managed to find our way to site number 38.  On the way we saw some familiar truck camper rigs, a few unfamiliar rigs, and our host for the weekend, Mike Tassinari, aka Mikeee.  I rolled the window down and Mikeee shouted, “Who let the riff raff in?”

After plugging the camper in we walked up the hill to the pavilion area to register and do what the riff raff do.  In this case that was catching up with old friends, meeting new friends, and settling in to what was going to be another fantastic North-East Jamboree.  Say what you will about Mikeee, he knows how to throw a party.

Registration for the rally was $10.  In years past, the North-East Jamboree rallies were free which meant the rally organizer not only had to work their tails off to plan, organize, and host the rally, but they also got stuck with the costs.  This year the Jamboree community demanded Mikeee and the other rally organizers charge at least a nominal fee.  We’re thrilled to support the rally organizers and look forward to paying our fair share of the rally costs.  And before I forget, thank you for all your guys do for our community.  It’s truly and deeply appreciated.

By then it was approaching meal time, which seems to happen every few minutes at a truck camper rally.  Mikeee proudly handed Angela and I these rather dangerous looking spears and proceeded to tell us how he had made the hot dog weapons.  For our food skewering pleasure Mikeee offered Red Snapper hot dogs from Maine and some other much less colorful but equally large hot dogs.  We went for the Snappers, poked the wieners, and headed for the fire ring.  Next time we’re bringing marshmallows. 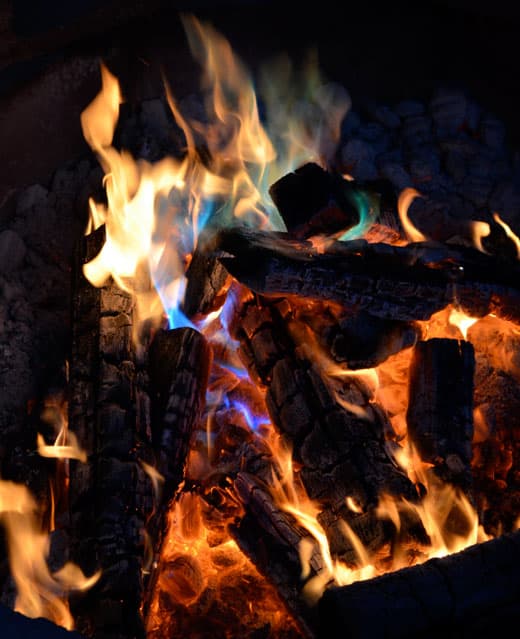 A few minutes later, the fire started turning colors.  Or maybe there’s a little something extra in those Red Snappers.  Now that’s what I call a campfire!

At 8:00am the next morning Mikeee brewed an enormous pot of coffee and invited the entire rally to imbibe in a few gallons of joe.  We were too comfortable in our Sapele retreat, but made our way back up the hill for Mikeee’s Torklift International Treasure Hunt clue announcement at 9:00am.  What’s a rally without an opportunity to win a week long truck camping trip to Alaska, plane tickets, fuel, and groceries included?  Too bad we can’t win.

In the afternoon the rally gathered in the pavilion to share tips on truck camping.  Afterwards Mikeee had a hands on seminar demonstrating how to install hour meters on Honda eu2000i generators.  Angela jumped right in to photograph the seminar and take notes for an upcoming story. 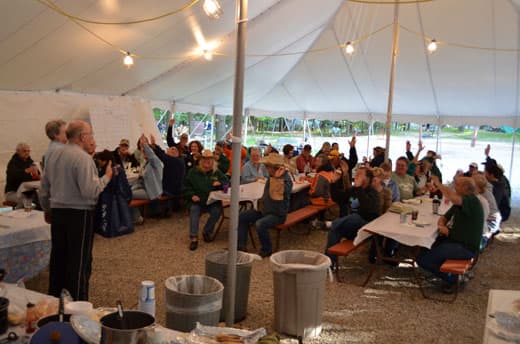 Dinner that evening was a potluck.  Angela and I always struggle with potlucks because we really can’t cook too much in the campers we borrow.  And you can’t really cook something at home and then drive it in an unrefrigerated car for ten hours.  We could, but then the campfire might start turning colors for all the wrong reasons.

Making matters worse, everyone else brings out these incredible dishes.  It’s like we’re camping with Jamie Oliver, Wolfgang Puck, and Emeril Lagasse.  We do our best, and then eat all the delicious food everyone else brought.  Don’t tell anybody.

After dinner Cathie Tassinari quizzed the rally about Massachusetts facts.  Cathie was extremely disappointed in our apparent lack of knowledge on the subject and didn’t hesitate for a second to tell us so, repeatedly.  Eventually she asked questions cavemen and cavewomen like us could answer.  The winners received goody bags stuffed with everything from Torklift hats to rubber band guns.  Somehow we came home with two of the elastic band projecting devices.  C’mere Harley…  Just kidding.

Mikeee must be an early riser because he had a smoke alarm and propane compartment check seminar and cross campground inspection tour and fiesta at 8:30am.  Or maybe this behavior explains why he needs six gallons of coffee at 8:00am every morning.  It’s coffee for the jamboree, right Mikeee?  Sure, sure.

We kid, but Mikeee was on a mission to give anyone who asked a fresh nine-volt battery for their camper smoke alarms.  And if the coffee had yet to fully kick in, surely Mikeee testing your camper fire alarm would help.  He found seven alarms with issues, with one that actually still had a wrapped battery.  Mikeee also checked propane compartment fittings by spraying them with soapy water and looking for any leaks.  If I’m the Chief of the Weight Police, then Mikeee is the Camper Safety Commissioner.

Something completely different happened when Cathie Tassinari held a “Spring Craft” gathering to make wind chimes.  Everyone received a wind chime kit and painted their chimes.  Donna Bitcon revealed her creative side and painted her chimes like baby turtle shells. 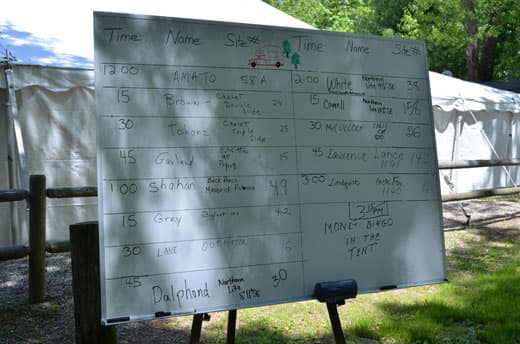 My favorite item on the rally schedule was the truck camper open house.  From 12:00 noon to 4:00pm on Saturday, rally attendees opened their campers for everyone to see.  To organize this event, people put their name, camper brand, and campground site number on a 3×5 dry erase board in one of the available fifteen minute spots.  We signed up to show the Northern Lite and attended as many open houses as we could.  Angela took notes and pictures and we’ll be publishing the open house as an upcoming story.

Up on the hill, time was running out for eighty-one lobsters, thirty-five pounds of potatoes, fourteen pounds of sour cream, twelve pounds of butter, eight bags of romaine lettuce, and four bottles of Caesar salad dressing.

It was strictly BYOB drinks, plates, and flatware, but the joint was set with plenty of lobster bibs, shell crackers, picks, and plenty of napkins.  Under the pavilion tent the rally was buzzing with excitement as the lobsters were tonged out “bug by bug”.  It’s a Lobstah Bash!

While not completely lobster virgins, Angela and I had not really cracked our shells and were delighted to sit across from lobster experts Bob and Cathy Grey.  Bob was once a lobsterman with his own traps so he showed us, monkey see money do style, how to eat a lobster.  It was a delicious mess, just like it should be. 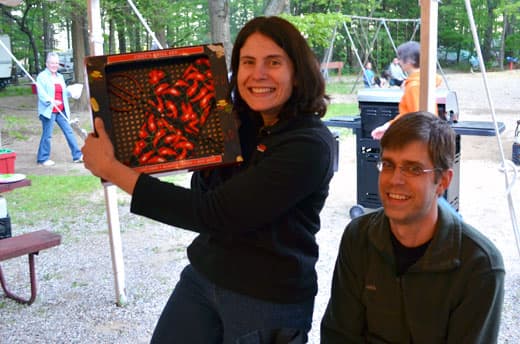 The traditional truck camper rally raffle started after dinner.  Red tickets in hand, everyone listened intently to Mikeee as he called out numbers and handed out prizes.  Angela nearly jumped out of the tent when she won a barbeque set.

At some point during the raffle Angela handed our camera to Pam Tchorz.  For those of you who haven’t met her, Pam is just permanently beaming with fun, and a little mischief.  She was so excited to get our camera and proceeded to take candid pictures of everyone.  Somehow she got just about everyone to smile.  She even talked a few into kissing.  Like I said, mischief.  Next rally, she’s our photographer.

Sunday breakfast brought the entire rally under the pavilion tent for pancakes, eggs, sausage, bacon, potatoes, coffee, and orange juice courtesy of Xtreme Campers.  It was wonderful to spend a few more minutes with our truck camping friends, but we had a very long travel day ahead of us and couldn’t say for long.  We said our goodbyes, packed the camper, and headed west to return the Ford F-350 and Northern Lite.

Yes, begrudgingly, we did.  Two hours later we were pulling into Truck Camper Warehouse to unpack the camper into our car and hand over the keys to Bill Penney.  What did we think of the 2012 Ford F-350 SRW 6.7 diesel and a 2012 Northern Lite 9’ 6” Special Edition?  A formal review is boiling in the pot now.

Thank you Mikeee and Cathie Tassinari and the entire North-East Truck Camping Jamboree for another amazing rally!

For more information about the North-East Truck Camping Jamboree, visit their website at www.truckcamping.net.