With a fifth wheel, a truck camper, and only one truck, Marie and Greg Morgan had a very difficult decision to make.  As Hurricane Laura approached the coast as a dangerous Category 4, they had to decide which RV to save, and which to leave behind.  Their choice, and the unbelievable outcome, is one for the books. 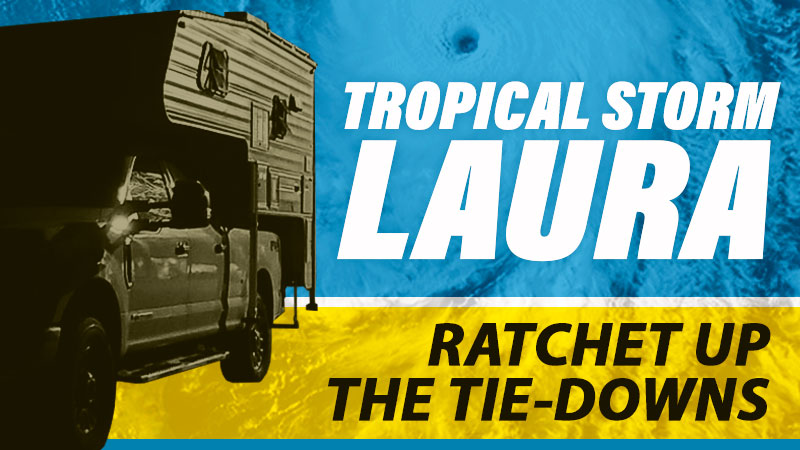 To an onlooker safely living in a northern state or province, the threat of hurricanes might appear to be easily predictable, and avoidable. The weather forecasts literally show the storms rolling off west Africa and they track them, hour-by-hour, across the Atlantic. If a bad storm heads your way, just leave – right?

Unfortunately, it’s not that simple. First, these storms can erupt to life-threatening levels and dissipate to almost nothing in a matter of hours. They are also extremely erratic in their trajectory turning and wobbling with the trade winds, the Jet Stream, the Gulf Stream, vertical wind shear, and pressure systems among other variables.

So there you are in your house watching yet another storm cross the ocean. The local weather guy has all the forecast models up showing it going out to sea in one forecast and straight up your keister for Easter in another.

Another chart shows the storm getting chewed into a harmless rain shower by Saharan dust while the next has it intensifying into a Category 5 disaster that will pull up your roost and tomato shoots and plant them both somewhere in Tennessee. One anxious newscast to the next, the weather people don’t exactly know where the storm will land, or how bad it will be.

Now imagine going through some approximation of this experience at least a dozen times per year. If you closed up your house and evacuated every time a storm path was possibly predicted to hit your area, you’d be evacuating needlessly an awful lot. It’s really the modern-day equivalent of crying wolf. Once you hear “possibly a hurricane” one too many times, it loses its meaning.

So, sometimes people wait until a storm is a few days out to react. They may watch the storm the whole time, but they really don’t think about boarding up, packing in, and getting out until the storm is practically knocking on their shoreline’s door. At that point, it’s a mad dash to avoid the inevitable traffic jams, fuel shortages, and booked hotel rooms upstream.

Among our amazingly diverse and well-distributed readership, we have a good number of fellow truck campers who live near southeastern coastlines. These folks are no stranger to strong storms or their frustratingly fickle flight paths. And they know the weather prediction dance all too well.

Marie and Greg Morgan live in Jasper, Texas, a small town about 130-miles northeast of Houston known for their annual Butterfly Festival in October. Jasper also happens to be about 100-miles northwest of Cameron, Louisiana, the center of where Hurricane Laura made landfall.

With winds peaking at 150-miles-per-hour, the storm arrived as a deadly Category 4 near Cameron, Louisiana on August 27th, 2020. The devastating storm was the 10th-strongest to strike the United States by wind-speed, killed an estimated 36-people in the United States (71 in total), and inflicted nearly $9-billion dollars in damage. As hurricanes go, Hurricane Laura was a historically bad storm.

Marie and Greg had just bought a Northstar truck camper, literally a week before the storm. They live full-time on their Texas property in a fifth wheel, but only had one truck to evacuate. As the weather people prognosticated, the storm came increasingly in their general direction, and they had a very difficult decision. Take the fifth, or guide their new Northstar to safety. Get ready to hang on for one wild ride. 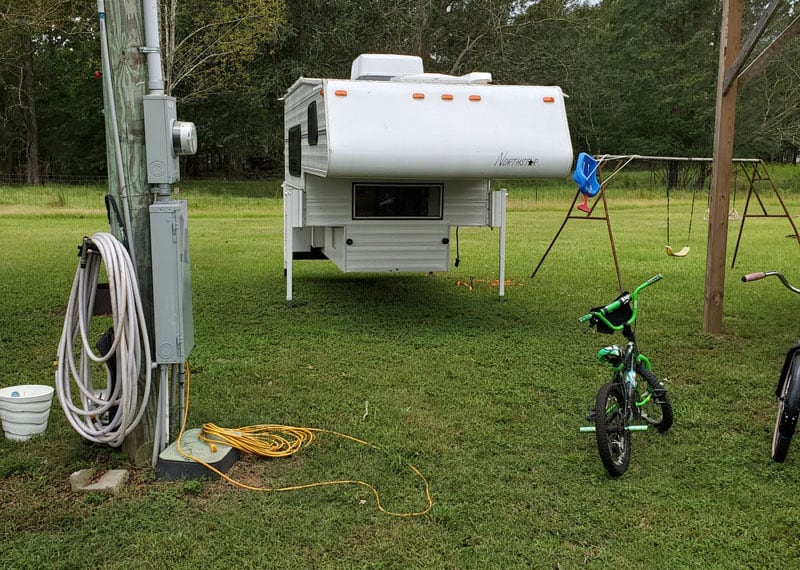 Above: They got their new to them Northstar a week before Hurricane Laura was headed their way

You own a fifth wheel and a truck camper, but only one truck. How did you decide which RV to evacuate in, and which to leave to face the approaching storm?

We really struggled with that decision. With the short notice, it would have been easier to just load the camper and leave. However, we full-time in our fifth wheel. It’s paid for and our home.

The truck camper is also paid for and fully insured. If we evacuated in the camper and lost our fifth wheel, we could live in our camper until we got our insurance money.

We had just bought our Northstar camper a week prior to the storm. As we watched the weather reports forecast the storm coming our way, we thought, “Which kid do we save? The fifth-wheel or our new-to-us camper?” 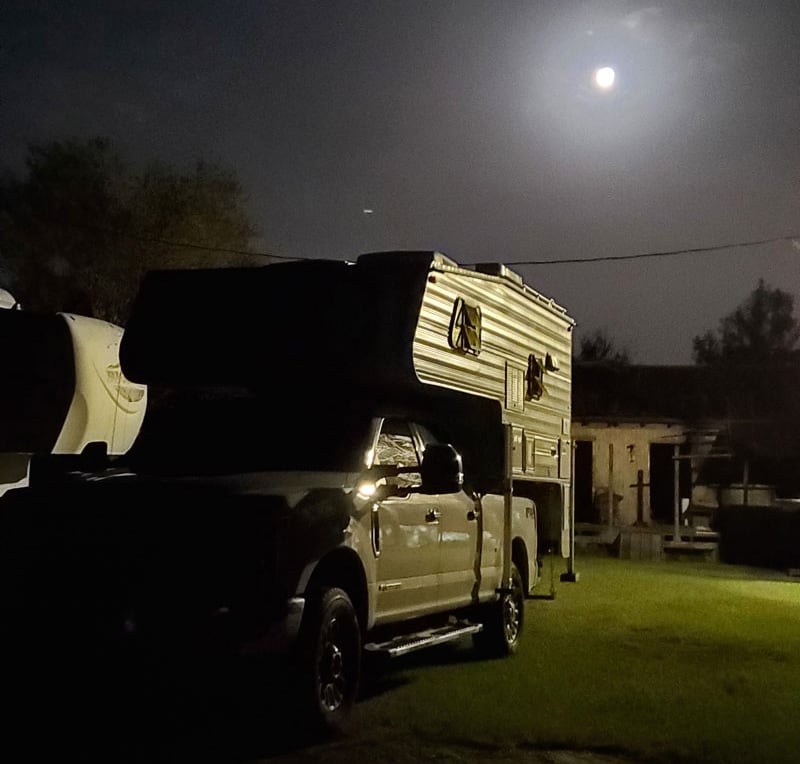 Three days before we were evacuated, I stocked the truck camper and our fifth wheel with non-perishables and toiletries. We still hadn’t decided which one to take, but at least we didn’t need to worry about supplies last minute. As we went back and forth with our decision, both RVs were ready to go.

Finally, we decided to leave our truck camper in Jasper, Texas, and took our fifth wheel. The deciding factor was the need for more room to house my two daughters and three grandchildren. They also needed to evacuate, and we all couldn’t fit in our camper.

How did you prepare the camper to survive the storm?

First, we faced the camper where we thought it would be facing the headwinds. We did not want the full force of the winds hitting a sidewall. Campers are designed to drive down the road at highway speeds.

Next, using the corner jacks we lowered the camper about a foot from the ground. Once lowered, we used four trailer house anchor rods to tie the camper to the ground. The metal bar anchor rods screw about three feet into the ground, like an auger (see below). The top of the anchor rod has an eyelet similar to a tie-down point on a camper. 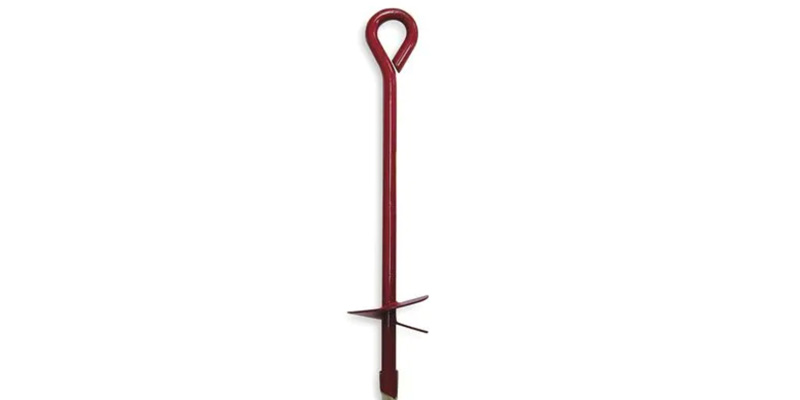 We put two anchor rods on the ground, one on each side of the camper. My husband took the ratchet straps and secured the anchor rod eyelets to camper’s tie-down eyelets. They were also criss-crossed for added strength.

He didn’t tie them down guitar string tight. If light winds did get under the camper, the straps and anchors would hold it down.

To increase the weight of the camper and lower its center of gravity, we filled the fresh tank with water and put our stuff on the floor. Anything that could blow away went on the floor, like our step ladder. Then we left.

Honestly, with the storm forecasts we were looking at, we thought our camper would be gone when we returned. Our preparations would at least give it a prayer.

Steering the camper into the approaching headwinds was a good thought. How did you know where those headwinds would be during the storm?

Our local weather forecasts said that our area would have north to northwest winds. Using a compass we turned the camper to face into those predicted winds.

“Honestly, with the storm forecasts we were looking at, we thought our camper would be gone when we returned. Our preparations would at least give it a prayer.”

Was there a mandatory evacuation or did you leave on your own accord?

When we left on Tuesday afternoon we were being told that it was going to hit here as a Category 4 storm. That would mean our property and truck camper would face 130 to 156 mile-per-hour winds.

We have sewer, water, and electrical hookups for our fifth-wheel. We also have a red portable building with a washer/dryer and some luxuries of home. When we left, we fully expected everything to be gone.

That must have been a tough moment. Where did you go?

We headed west for about three hours. The storm was heading northeast, so driving west put us out of harm’s way.

During the height of the hurricane, I was in an RV park with my feet up under the stars while many were back home were dealing with the storm. I was high and dry with little wind, and I felt safe.

That brings up an important point. Often times people ask why we sold our house and moved into our RV. This moment illustrates a significant reason why.

Because we live in an RV, I had the ability to easily move myself and my home to safety during the storm. My home was also fully functioning after the storm. My generator works, so I had power. People don’t realize how functional having a home on wheels can be. My husband and I will never move into a stick and bricks house again.

“Because we live in an RV, I had the ability to easily move myself and my home to safety during the storm.

I’m sure some of your neighbors were envious of that ability. Do you have any idea what kind of conditions the camper endured?

On Wednesday night the storm started around dark with thunderstorms and increasing winds. From the reports, the whole area had six to eight hours of constant wind and about twelve hours of storms.

Lucky for us, the storm shifted twenty miles to the east. This move dramatically changed the outcome for the better, but it was still an intense event.

Our local radio station clocked winds at 62 miles-per-hour before the power went out. The local airport recorded 80 mile-per-hour gusts. Instead of hurricane-force winds, our property endured something more like a tropical storm with several hours of sustained winds at 40 to 50 miles-per-hour. 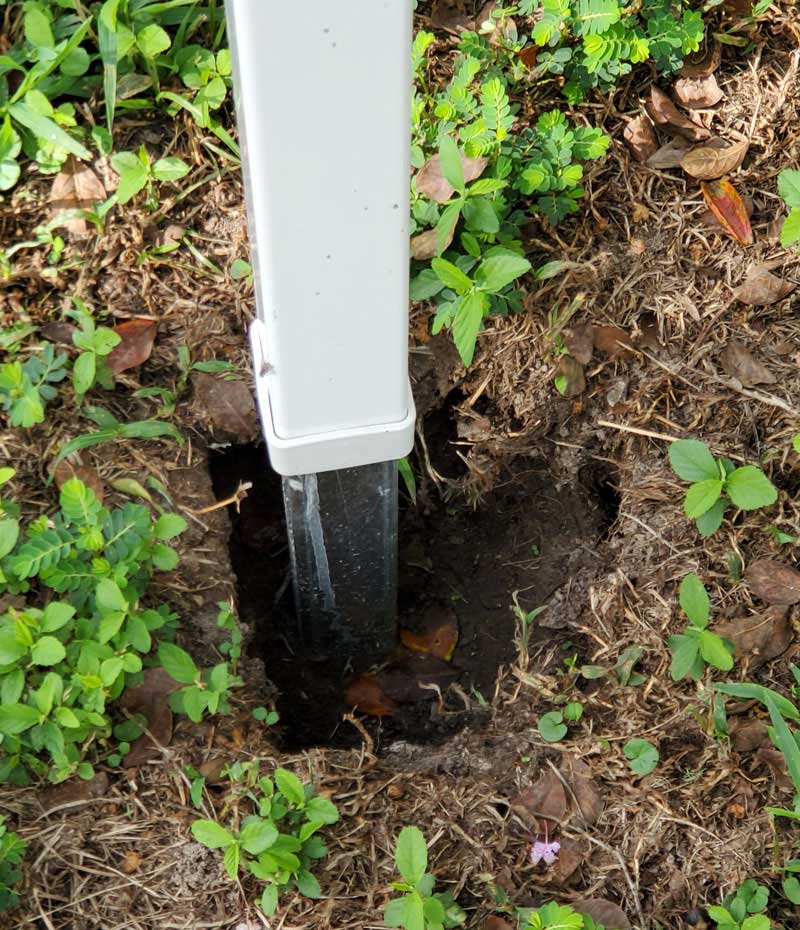 Was there any damage to your Northstar Camper?

Amazingly, no. What’s amazing about it is that just 50-feet from the camper the front porch blew off a nearby house. Another old house next door had its tin roof come off (pictured below). That shows how powerful the storm winds must have been.

The only thing that really happened to the camper is that the ground got soft from all the rain and the front left jack sunk down a foot into the dirt. We jacked it up, put a board underneath, and loaded it on the truck. That’s it. 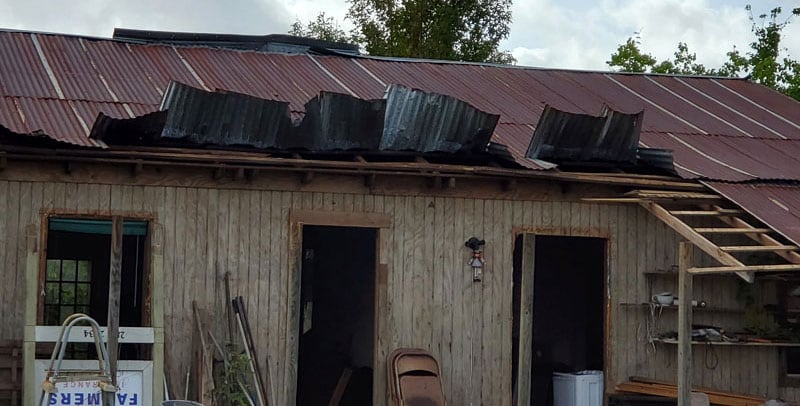 Now that the storm is over, are you looking forward to taking the camper out?

Yes. It’s the first truck camper we’ve ever owned. We are still trying to figure out how everything works. It’s actually a 2003 model, but it’s pristine. The previous owner stored it in a barn and kept it in showroom condition.

Believe it or not, we still don’t have front tie-downs and turnbuckles. When we went to order them, only the rear ones were in stock. Since they haven’t arrived, we used ratchet straps. That’s obviously a temporary solution. 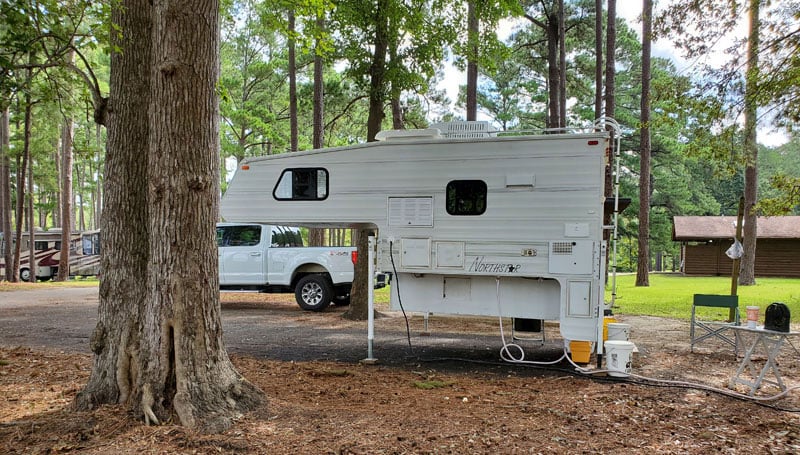 Above: Camping locally after the storm

Is there anything else that you’d like to add?

I was an insurance agent. I sold my business in October. When I got my camper, I made sure that it was loaded with insurance. When the storm was over my agent asked, “How did it fare?” It did just fine. Not bad for a 17 year-old camper.