Balancing work and play, Editor Erika Hokanson and her Akitas set out from New Hampshire in a Northern Lite seeking freedom, adventure, and the wonders of the West.

Life in a traditional stick home tends to fall into a comfortable routine.  It can be difficult to remember, or distinguish, the days, weeks, and even months spent at home.  While memorable events happen, most days drift past as the last.  If we’re not careful, we find ourselves thinking, “What happened to Summer?” and, “It’s my birthday again?”

Life on the road is another story.  New places, people, and experiences are common, indelibly marking their territory in time with a mental clarity that home life almost never provides.  At Truck Camper Magazine, the strongest motivation that gets us back on the road is this; can we remember, and distinguish, the days, weeks, and months spent at home?  The answer, all too often, is no.  The road is what makes our memories.

For us, the story of Erika Hokanson was a fresh and invigorating reminder of the importance of this life-affirming perspective.  Erika’s strength and positive attitude has propelled her to overcome tragedy, reconnect with distant family and friends, move to the opposite coast, and push forward to make the most of every day.  As Erika explains, she is “grateful for today”.  We can all gain from her example, and be inspired to live our lives to the fullest.  Seize the day. 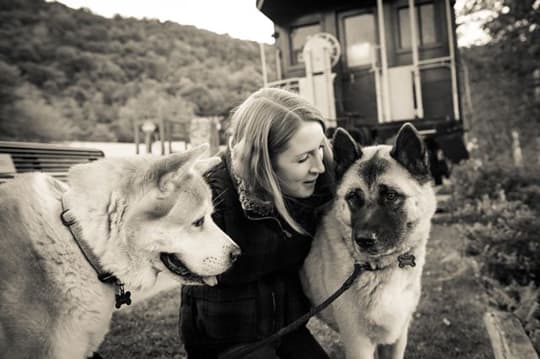 Above: Arrow, Erika, and Kodo

TCM: Tell us about how you got into truck camping.

Erika: Growing up in New Hampshire, I went camping with my family a lot.  Those were treasured times.  My dad was also into sailboats and was having a trimaran built to sail around the world with my brother.  Dad’s sense of adventure and spirit inspired me, but I wanted something to explore the land.  In high school I read Steinbeck’s Travels With Charley and Kerouac’s On the Road.  A few years after college, I planned a cross-country road trip and wanted something big enough to live in. 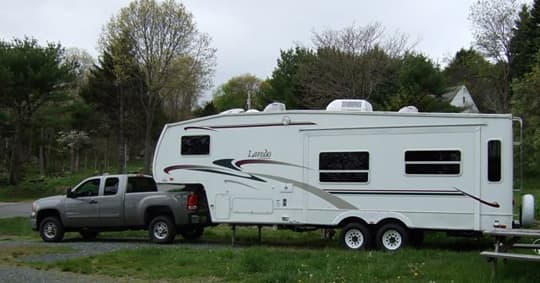 I bought a fifth wheel, which was like an apartment.  The interior was great and it was a good match for my truck.  Unfortunately, the fifth wheel was just too much to manage traveling by myself.  For example, it was hard to back up and turn around.  I needed more flexibility about where I could stop.  My dog and I enjoyed the fifth wheel for a while, but eventually I put it up for consignment at an RV dealership.  It sold almost instantly.

That started my search for truck campers.  A truck camper really appealed to me.  I already had the truck, so the camper would need to fit what I had to work with.  Before long, I had narrowed my search down to Northern Lite. 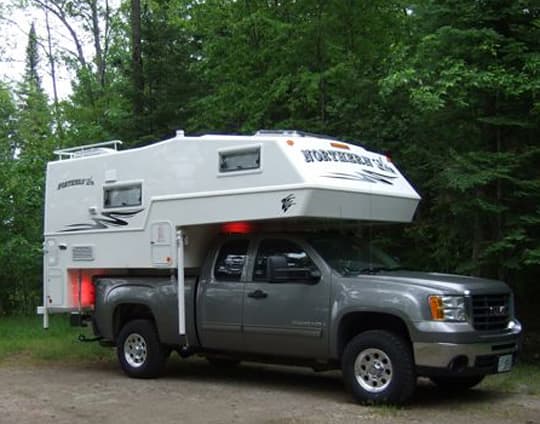 TCM: Why did you choose Northern Lite?

Erika: I really enjoy skiing.  I had seen other campers who stay in ski resort parking lots to enjoy the first mountain tracks in the morning.  So I wanted a camper that could handle the cold.

With my boating background, Northern Lite’s molded fiberglass construction and four-season insulation appealed to me.  After I crunched the numbers, weights, and tank sizes, Northern Lite seemed like the right camper for me.

I first tried to find a used Northern Lite, but found that people keep them.  That told me a lot about the brand and these units, how well they’re built, and how they hold their value. 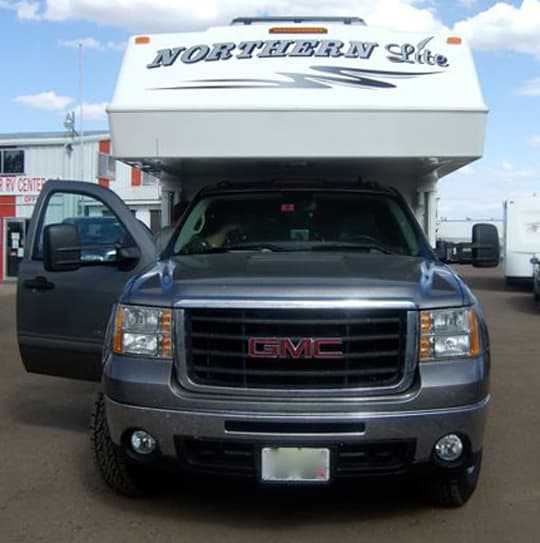 Above: Picking the camper up at Five Star RV Center

I also wanted a Northern Lite Classic.  All the campers I found at dealerships were Special Editions.  I didn’t need all the extras, so I special ordered a Classic through Five Star RV in Henderson, Colorado.  I optioned it exactly the way I wanted and Five Star RV offered me a great price.  I went with a friend and my dog to pick it up in July 2010. 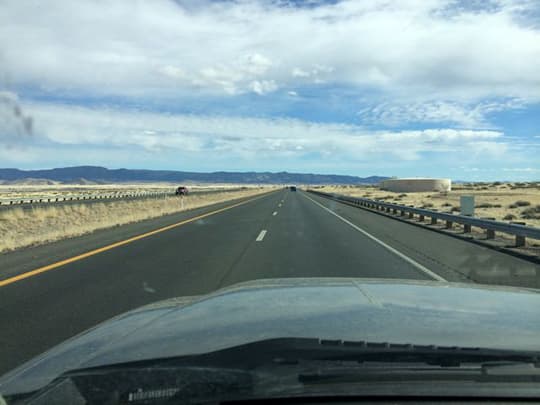 Above: Driving on the open road

TCM: What is driving the truck camper like compared to hauling the fifth wheel?

Erika: I love driving the truck camper rig.  The maneuverability is fantastic.  I can stop where I want to sightsee, grocery shop, and walk my dogs.  I have peace of mind and a lot more freedom compared to the fifth wheel.

I did find that the rig was more top heavy with the truck camper loaded and had to adjust to that when driving on the highways.  With the fifth wheel, I would also stay places for longer, sometimes even longer than I wanted because of the logistics of having to pack it up and move it.  I am more spontaneous with a smaller rig.  The truck camper is the vacation home of my dreams. 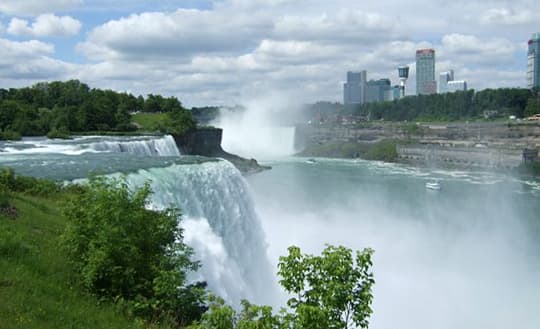 Right after I got the Northern Lite, I traveled to the Black Hills in South Dakota and the Upper Peninsula of Michigan.  I also stopped and marveled at Niagara Falls.  South Dakota was the highlight of that road trip.  I had never been to the mountainous regions of South Dakota. 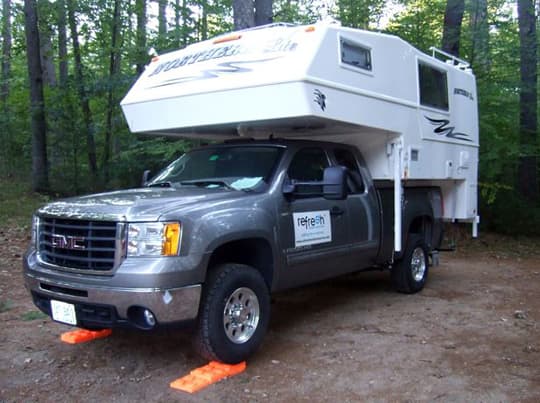 Above: Weekend trip at a New Hampshire state park

After that initial road trip, I got to know the camper better by taking it all over New England visiting friends and family.  I went to state parks, met with clients, skied in Vermont, watched wildlife in northern New Hampshire, and listened to waves roll in along the coast of Maine.  It is easy to take my camper anywhere. 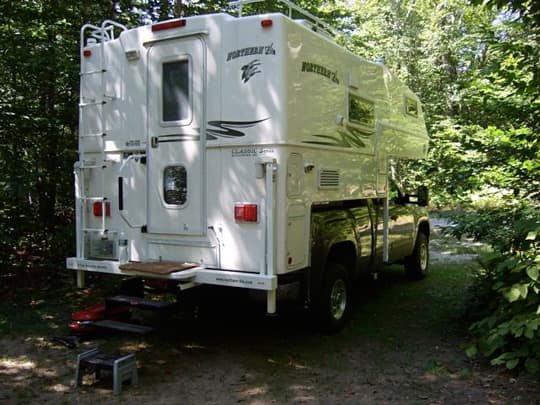 TCM: Tell us about moving to Seattle.

Erika: I had wanted to move to the Seattle area for a long time because I have friends and family here.  That was the end goal of the four-month trip from New Hampshire to Washington that I started in January of this year. I took a southern route and visited towns that looked neat.  I didn’t plan too much along the way and was open to distractions. 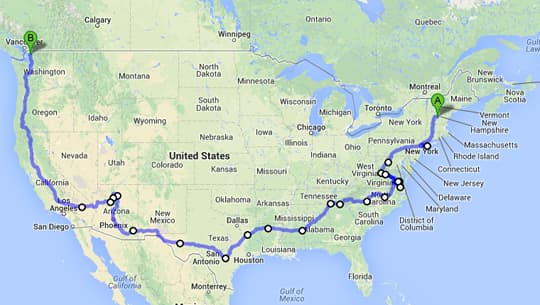 Above: Approximate route during the move from New Hampshire to Washington, January to February, 2014

I saved up before the trip and kept my expenses down, made my own food, and kept my speed around 60 miles per hour to save on gas.  I would spend a week somewhere, catch up on work, and then drive.  It balanced out.

When I finally got out west, I couldn’t decide where to settle down, so I camped for three months around the Northwest.  I’m now renting a house and have room for my camper in the driveway.  This is a good way for me to live in the West. 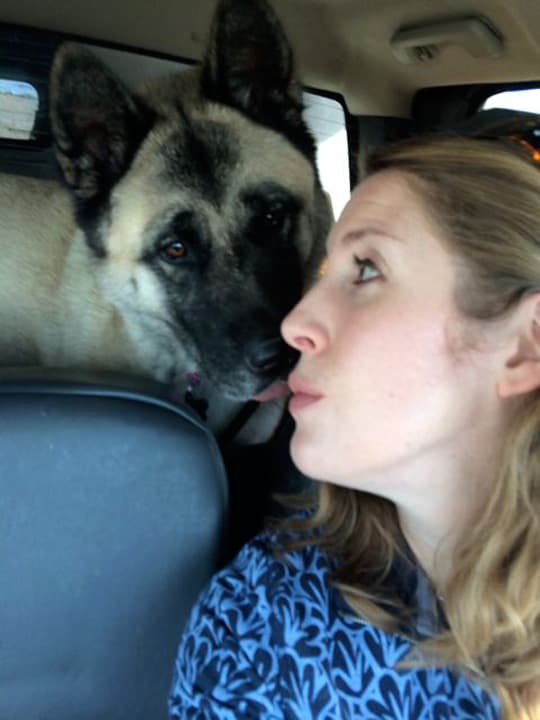 Above: Consulting with Kodo about that day’s route and smells

TCM: What’s your truck camping lifestyle like now that you’re on the West Coast?

Erika: I normally do weekend trips.  Recently I went to Portland, Oregon and stayed for a week to celebrate the retirement of a family member.  The great thing about bringing the camper is that I can take the dogs with me.  It’s convenient to sleep in my snail house when visiting family and friends.

I run my own business, Refresh Media Resources, LLC, offering editorial and web maintenance services, so I can work anywhere.  I use my Verizon Jetpack mobile hotspot because I have had trouble with WIFI in public places.  I work a few hours each day, which is just right for vacation traveling. 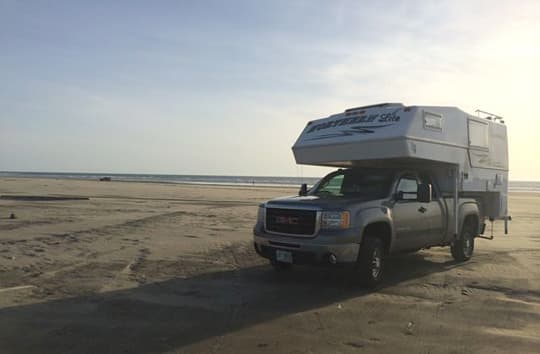 TCM: Our readers will be curious about what led you to travel so much in your early thirties.

Erika: Both of my parents died young of cancer.  I was telling you that my dad was having a trimaran built.  He never got to enjoy it.

Don’t put off your dreams.  Who knows what could happen tomorrow?  This has made me grateful for today.  Stay healthy and keep yourself, and the people around you, happy.

Other people who influenced me were my high school teacher and his wife who are retired and travel full-time in a fifth wheel.  When I started traveling, they helped by sending RV troubleshooting tips.  They encouraged me to join the Escapees Club and have the same philosophy about life that I do.

It’s good to see the world and visit people I care about who live far away.  Staying mobile provides fresh perspectives on life.  There is so much to see out there. 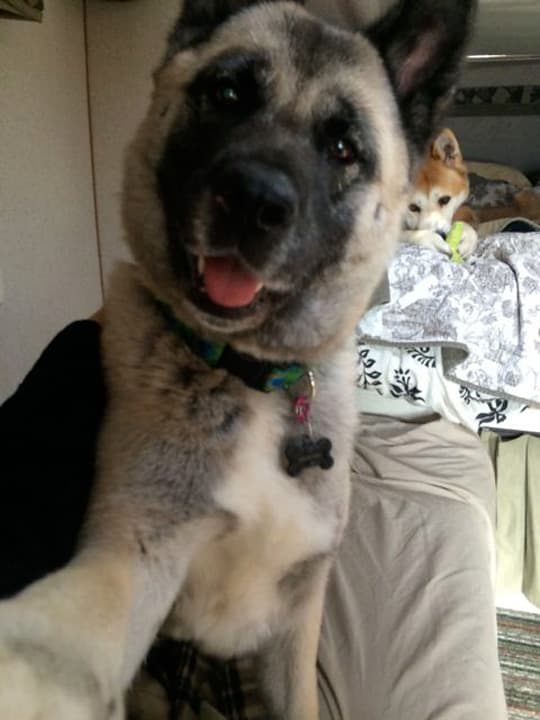 Above: Kodo and Arrow hanging out inside the camper

The truck camper is now an extension of my life.  It’s so convenient.  I spend time helping relatives and volunteering.  I go to weddings and retirement parties.  I also do a fair amount of urban camping to attend concerts.  I am a longtime fan of the band Phish and took the rig on the 2013 fall tour following the band.  It was so perfect that I plan on doing that again in the future.

If I’m going anywhere outside of the immediate area, I take my truck camper because I could potentially extend any trip.  With my camper, the dogs and I have a known comfort zone.  The flexibility of the truck camper is perfect. 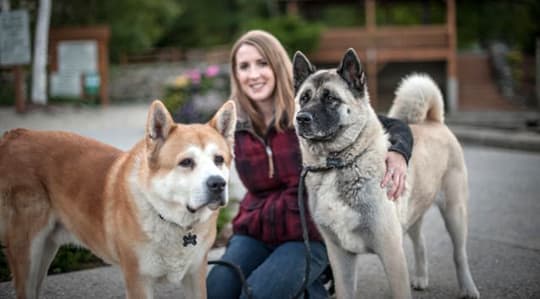 Above: Arrow and Kodo with Erika

TCM: Tell us about your travel companions.  How do they like traveling?

Erika: The red dog is Arrow, who never liked riding in the car.  I was worried about that.  But since he’s been to all these interesting places, he now gets excited when I pack the camper.  A few years ago I got Kodo, who is a few years younger.  Both of them are from Big East Akita Rescue in New Jersey.

My dogs are good sports and have come to love the camper.  They love sniffing the air wherever we go and look forward to the security and reliability of the camper, their cozy den. 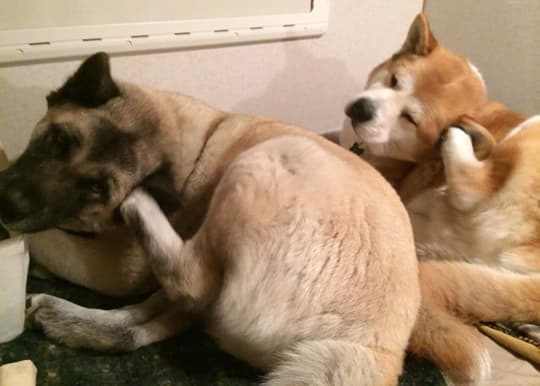 Above: The dinette folds down as a second bed for Kodo and Arrow

I’ll usually fold the dinette down so they have a second bed, however they see the whole camper as their doggie bed.  They love to stretch out.  The camper is small, but they are house dogs by nature and big couch potatoes.  They are happy relaxing in the camper after a day of walks and exploring. 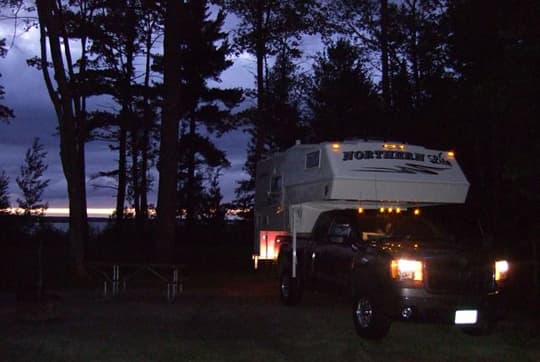 Above: Sunset on the Upper Peninsula of Michigan

Erika: Time will tell.  I’ll travel around the Northwest more and visit my brother and his wife in Colorado.  I’d like to write a book about some of my adventures.

Before my next big trip, I want to do some mods with my camper, primarily solar.  I have a generator but I don’t use it.  Once the solar power is set up I’ll look forward to boondocking for longer periods of time.  I haven’t been to a lot of the national parks, so those are on the list.

TCM: That’s an excellent plan.  The national parks are stunning.

Erika: I would encourage other people, especially women, to go for it and travel.  It’s easy to have a truck camper even if you’re not mechanically inclined.