While on our tour, we went to Galaxy Campers, a dealership that sells only Lance Campers in Ontario, California.  During our visit, David Yavalak and Rhonda Morgan recommended that we talk with Mary Anne Pugin, an independent truck camping lady who enjoys the truck camping lifestyle and has traveled all over the United States. 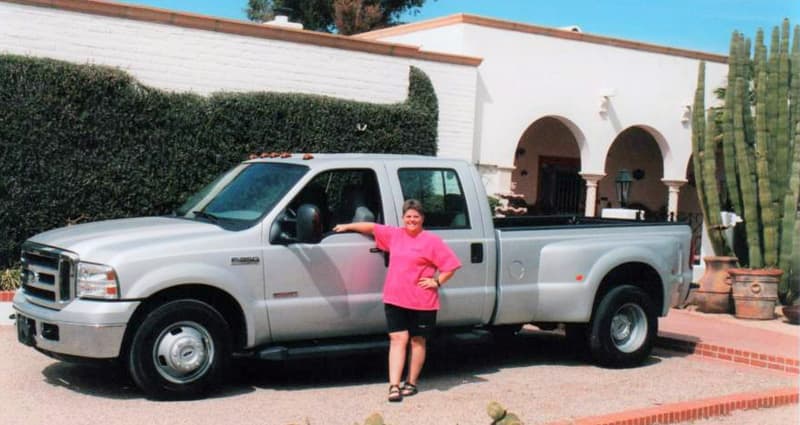 Above: Mary Anne and her truck – Photo by Lisa Weyerhaeuser

Automobile trips were very much a part of my life growing up in the 1950s and 1960s.  My Dad was a Navy Commander and he and Mom made sure that our moves from one base to another included a lot of adventurous stops along the way.  Our later family vacations were almost always by car and I enjoyed the trips we took to Minnesota, to the New York World’s Fair, to Wisconsin Dells, and to Florida.

In the summer of 1970, just before my senior year at Gallaudet University in Washington, DC, a friend and I took a 7-week cross-country trip in my ’67 Chevy Camaro.  We camped out mostly in my small canvas pup tent and had a grand time visiting many national parks and landmarks.

In the summer of 1997, I took a solo 6-week cross-country trip in my ’97 Honda CRV, traveling mostly on the secondary and back roads and camping out in the car.  It was during this 1997 trip that I noticed truck campers and other RVs.  That’s when I decided that it was how I wanted to travel when I retired.

Why did you want a truck camper? 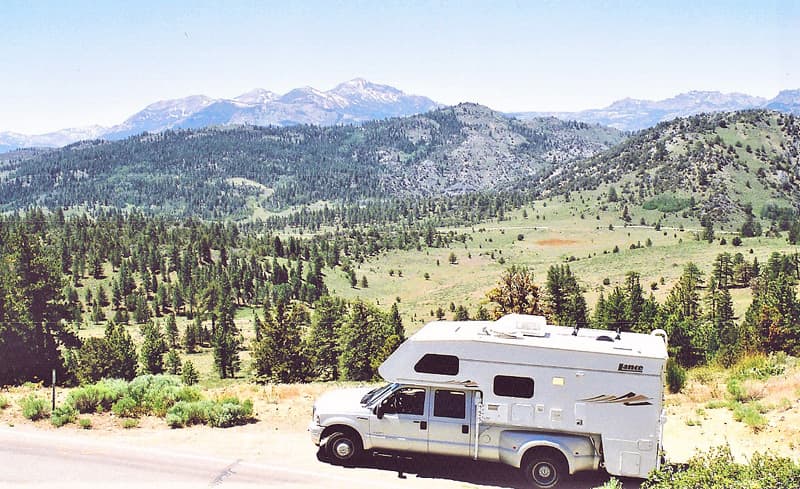 How did you choose your truck camper?

Prior to my retirement in 2005, I did online research on truck campers and found myself especially interested in the Lance Camper website.  I managed to see a few Lance campers at a couple of RV dealerships near my home in Tucson, Arizona, and really liked what I saw.

At the RV Show in Pomona, California I checked out the Lance Camper models on display and had the good fortune to meet David Yavelak, of Galaxy Campers in Ontario, California.  David answered all my questions and when I told him I was interested in the Lance 1121, he helped me understand why I would need a one-ton dually for a camper of that size and weight.

In due time, after I had test-driven a Ford F-350 dually, and reassured myself that all 5’1″ of me can reach the pedals and handle such a big truck, I decided there was a Lance 1121 with my name on it.  Not having this model on his lot, David located one for me in northern California and arranged to have it transported to his dealership.  I bought my truck in February 2006 and picked up the camper the following month. 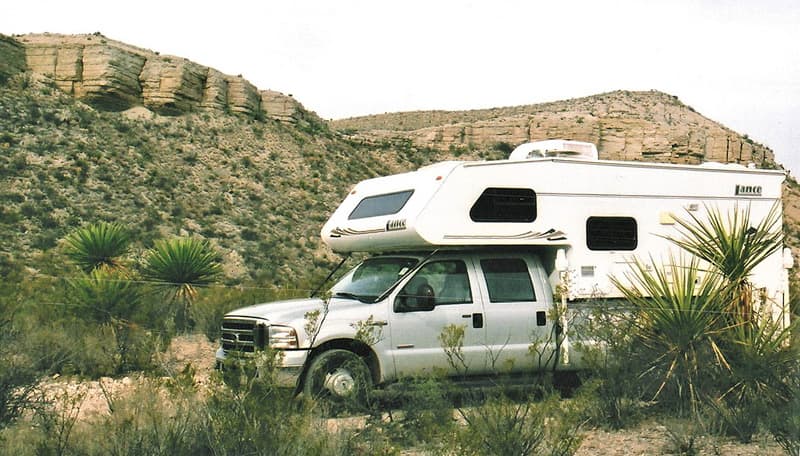 Tell us about your truck and camper.

My truck is a silver 2006 diesel Ford F-350 4×2 4-door dually.  My camper is a 2005 model 1121 with a dinette slide-out.  The camper has all the features that Lance offers; a 3-burner stove with oven, a microwave, two sinks, refrigerator and freezer, toilet and shower, TV and CD/DVD player, air conditioner, and heat.  One of the main reasons why I wanted this particular model is because of the cabover window.  I need lots of windows, not only for the natural light, but for visibility.  I’m deaf and it’s very important for me to be able to look out and see what’s outside all around the camper.

What do you like to do when you go out truck camping?

I really enjoy driving and taking in the scenery.  I love driving through small towns and taking note of the local folk and the stores, cafes, old movie theaters, and old filling stations.  I love driving on winding two-lane roads through farm and grazing land, checking out the horses and other livestock.  I generally avoid the interstate and have very little interest in visiting big cities.  I’d rather visit a historic ranch or a local historic site than a museum or an art gallery.  I love the water and am thrilled every time I find a site overlooking the sea, a bay, a lake, or a river. 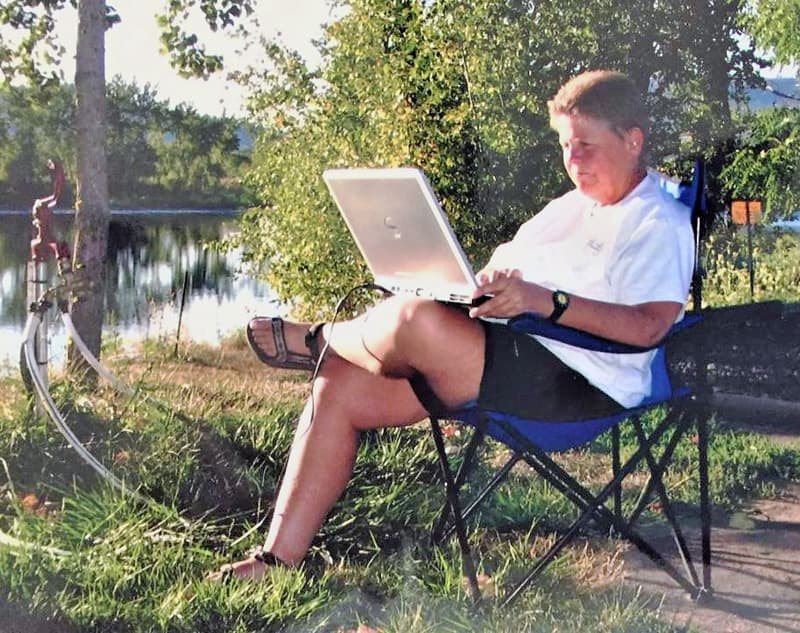 Above: Mary Anne and her computer next to the Clearwater River – Photo by Helena Schmitt

At my site, I’m perfectly happy to sit outside and read, or take a walk or short hike, or sit inside the camper and turn the TV on to something (usually CNN), and check my emails and work on my blog.

Do you have any advice for new truck campers out there?

For people just starting out, I would advise that they research truck campers carefully and make sure they know what they want out of the truck camping experience.  It is important also to have a positive feeling about your relationship with your truck camper dealer because you want your dealer to be there for you when you have questions or problems.  I feel very fortunate that I met David and his colleagues at Galaxy Campers.  They have been exceptional!

What are the challenges you have when you truck camp?

When I try to cook!  I’m not a good cook and since I still feel a little bit nervous using the propane stove, I usually get a big lunch or dinner somewhere and microwave the leftovers.  I wouldn’t necessarily call this a challenge, only because it’s a daily fact of life for me, being a deaf woman, but I try to be very aware of my surroundings.  Unlike the hearing traveler who is alerted to beeps and other sounds inside the camper, I’m looking around often to make sure what’s supposed to be off is off, what’s supposed to be lit up green is lit up green, etc. 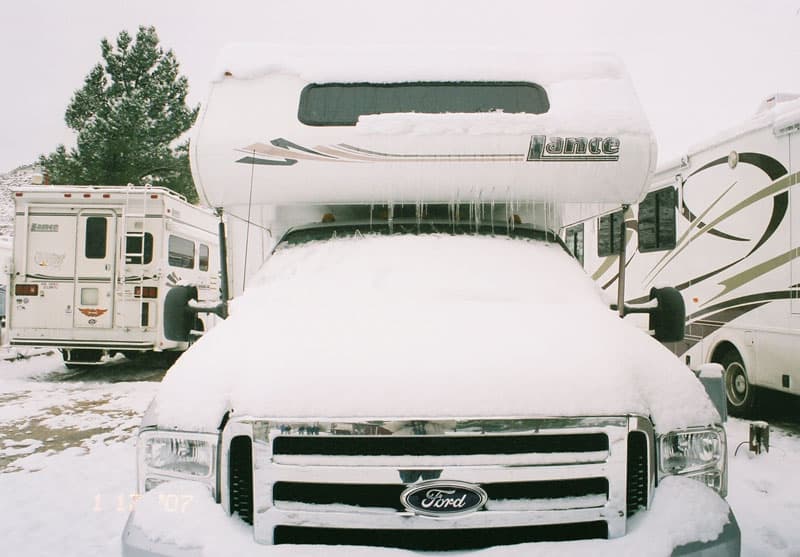 What unexpected challenges have you faced being on the road?

Weather conditions become an unexpected challenge because I can’t use the radio as a means of being apprised of changing weather conditions as I travel.  Truck camping in Texas in January and February 2007, for example, I arrived at an RV Park in the small town of Sanderson.  As I paid for my site, I learned from the host that freezing temperatures were expected that night, and maybe even some snow.  I ended up being “snowbound” in Sanderson for three days, but that turned out to be a blessing in disguise.  It hadn’t occurred to me before, but I capitalized on that opportunity to look for and bookmark online weather links that I henceforth used to check on weather and road conditions for the rest of my trip.

Where have you gone in your truck camper?

My first “practice trip” in the camper was a 6-day trip to Mount St. Helens and Mount Rainier in Washington State in June 2006.  Since then I’ve been to Northern Washington, Idaho, and Montana.  On another trip, I went to Texas.  I’ve also been to Central Oregon and the eastern part of California.  I traveled on Route 66 (Arizona to just short of Chicago, IL), and lastly, I went to Arizona, Utah, and Wyoming. 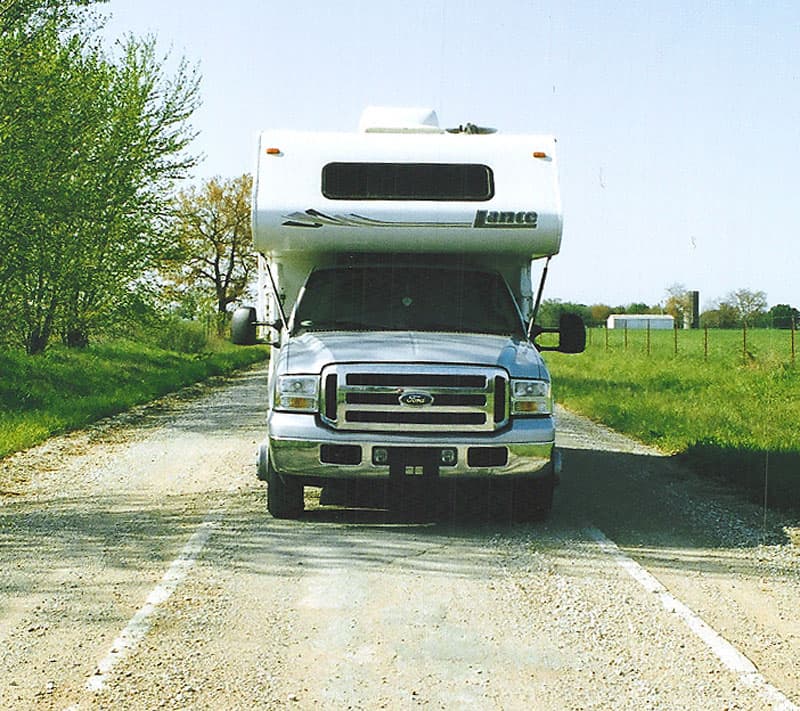 Where is your favorite place?  Why?

It’s so hard to pick a “favorite” place.  Being that I love the water, I enjoy every time I’m settled down with a view of the water.  The Route 66 trip was definitely the most educational.  I had an excellent book, the EZ66 Guide for Travelers, written, designed, and illustrated by noted authority Jerry McClanahan, and by using this book as a reference guide, I was able to travel nearly every inch of the old and original Route 66 from Topock/Golden Shores, Arizona to Dwight, Illinois.  The historical perspective everywhere along the way was just fabulous and inspirational.

Is there a plan or do you let the trip take you?

I generally have a plan, but also a very flexible itinerary.  When I decide on a state I want to visit, I do some online research and make notes of interesting areas, sites, scenic drives, national and state parks.

When I arrive in the state I’m visiting, I stop at the Visitor’s Center and/or Chamber of Commerce and collect volumes of materials to review.  I then consider and plan a general route but I permit myself a great deal of flexibility to make adjustments along the way.

What do you like to do on your trips?

I love to just drive and see what’s out there, what’s over that hill, what’s around that bend, what’s so special about the food at this cafe, or the pie at that one.  I love nature and animals and when the opportunity is there I’ll walk around a wildlife refuge, check out the exotic animals at a drive-thru safari, admire free-roaming wild horses and majestic bison.  Truck camping has made it possible for me to really see the USA.

Where do you plan on going next?

I plan to travel north along the border this summer.  I want to check out the northern part of Montana and drive eastward, hugging our border with Canada, through North Dakota, Minnesota, and Wisconsin.  I want to go back to Lake Superior, which, in my opinion, is the most beautiful of the five Great Lakes.

At some point, I will turn south and head back westward through Iowa and Nebraska.  Why?  It’s a big country and there are places to go and things to see and foods to taste and smells to smell! 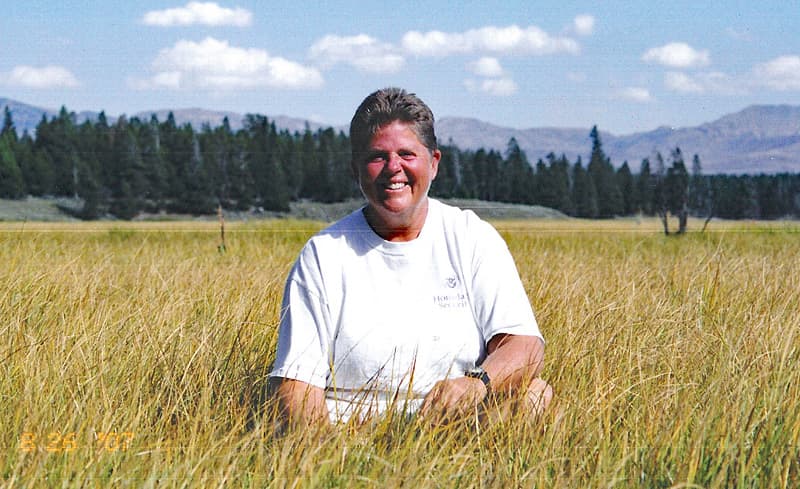 What’s the most interesting thing that has happened to you in your travels?

I’ve had so many interesting experiences and encounters during my travels, but the most emotional for me was my encounter with a little dog that I named Hardy.  I was driving along a winding two-lane road near the John Day River in Oregon when I saw a small white something running furiously down the middle of the road.  When I passed it I saw that it was a dog and the dog looked right at me and started barking.

I pulled over and when I opened the door, the dog, showing no hesitation or fear, jumped right onto my lap and started licking my face.  It had a collar, but no tags, seemed healthy and uninjured, and had the most intelligent brown eyes, which also looked at me with gratitude.  In reverence to her spunk, I named this little girl Hardy.

She fell asleep as I drove on and the beautiful Oregon scenery became a blur as I tried to decide what to do.  At that time I was just a few days into a two-week trip through Oregon and California on my way home to Arizona.  While I do love dogs, and actually have cats at home, I really do not want to travel with pets.  As I approached the town of John Day, I decided I would get some dog food, find an RV park, settle in with Hardy and contemplate my options.

At a filling station in town, using twine as a leash, I let Hardy out to walk around and relieve herself.  I noticed that a couple in a nearby pickup truck was trying to get my attention, so I scooped up Hardy and walked over to them.  As they admired Hardy they told me they had two dogs of the same breed, both of which were also in their truck.  I asked them what breed that was and they said “Jack Russell.”