Light the campfire and break out the cast iron Dutch Ovens.  It’s time to cook like the cowboys do.  Just don’t burn your biscuits!

If there’s anything that truck campers love more than truck camping, it’s food.  We may fight like cats and dogs when it comes to this truck brand or that, but can all immediately agree about food.  Anyone who has ever attended a truck camper rally can attest to this first hand.  The all-you-can-eat feeding frenzies at these events are legendary.

Speaking of truck camping and food, perhaps no other couple has married our two most favorite topics better than Rodger and Arlene Brill.  These two Dutch Oven connoisseurs travel coast-to-coast cooking everything from biscuits to cobblers to scalloped potatoes to pork barbecue with Jack Daniels whiskey sauce.  And if that’s not enough, they often give away free samples where they’re camping.  Is it any wonder that they probably have more friends than all of us combined?  We should all just go camp where they do and eat ourselves silly.  I’m in.

TCM: You have seemingly owned just about every type of RV possible.  How did you finally end up with a truck camper?

Rodger: My wife and I have been camping for forty-four years.  We started in a tent, which lasted for a weekend.  Next was a 1955 Chevy short bed pick-up with a homemade top, followed with a single wheel pull tandem, then a Class C motorhome, a Class A motorhome, fifth wheel, and now a slide-in pick-up camper.  A lot of experience led us to settle on our slide-in camper.

While camping with our a pull behind, we could never keep our refrigerator door closed.  It would always pop loose while traveling.  On one weekend trip, my wife had cooked a big roast.  When we stopped for a break and opened the camper door we found the roast on the floor looking at us.  This doesn’t happen with our camper.

Another memorable experience was in our motorhome in Ten Sleep, Wyoming.  We made a wrong turn and the road turned to dirt.  Suddenly, a rain storm popped up and, before we knew what had happened, we were stuck.  We would never have been stuck with our pickup camper.  We can confirm to all the reasons outlined by Gordon White in his article of the advantages of a truck camper.

Our fifth wheel is great if we want to sit in a campground for a month, but that’s not for us.  We love traveling across our great United States.  In order to go where we want and stop where we want to stop, we only way is with a slide-in pick-up camper.  We’ve had a blast!

TCM: Tell us about how you discovered that a truck camper would be a better fit.

Arlene: It was in 2007 when we went out west.  There’s a picture we sent you in the Redwood forest.  That’s our old pick-up camper.  We bought the camper in 2007 for that trip.

Rodger: That was a trial for us because we had a big fifth wheel at home.  We said, “Let’s try a pick-up camper”.  Then, in 2010, we made another trip.  We found a very nice camper, got ready to go, and fuel prices went through the roof.  Do we use our gas truck or diesel?  Which would be cheaper?

We had 2008 GMC truck and used that because we thought that gas would be cheaper on our cross country trip.  We went to California, up the coast, back down through the Columbia River Gorge, and then through Idaho, Wyoming, and Utah.

During that trip, we fell in love with the pick-up camper.  Arlene said, “I want one with a slide”.  That’s when we started researching and fell in love with the Arctic Fox.  We lucked out and found a 2006 Arctic Fox in Mississippi on eBay.  We picked it up, toured the Gulf, went to New Orleans, and have had fun with our camper ever since.

When we got home, we listed our fifth wheel and sold it.  We also sold our older pick-up camper.

Rodger: Angela, it’s the way the pioneers cooked when they were migrating to the West.  It’s something that’s been held on to by a number of different people across the country.  It’s basic cooking from scratch.

The cattle drive of years ago is a thing of the past and Chuck Wagon cooking never bit the dust.  It is still alive and well with lots of competitions, reenactments, and shows for tourists.  Wagon cooks pride themselves on their ability to use simple and plain ingredients to prepare memorable dishes cooked outdoors on wood fires, using heavy cast iron implements even for baking.

I’ve been fortunate to be able to go on fishing trips in Alaska, Wyoming, and Montana.  We will go horseback riding in the wilderness and stay on a river and camp.  The guys will cook in Dutch Oven iron pots. 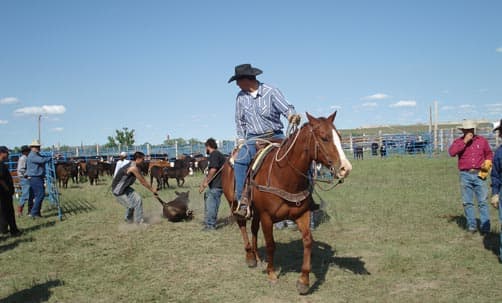 Arlene: We were visiting Jackson Hole, Wyoming and went to Bar J Ranch.  They have a show and feed you.  Before meal time, they had a cowboy baking biscuits in cast iron pans.  We tasted the food and it was so good.  I couldn’t believe how they got the food browned.  Right then and there Rodger decided he wanted to do try Dutch Oven cooking.

A true cowboy has an iron pot or Dutch Oven.  You see a lot of Dutch Ovens in southwest Texas and Arizona.  They also have chuck wagon cook-offs in all parts of the country.

Rodger: Now, when we go camping, our meals are in iron pots over an open fire.  We take all of our equipment with us.  Normally there are fire pits in campgrounds.  I use these pots and a black skillet.

We draw a lot of attention when we make biscuits and apple cobblers from scratch in our Dutch Oven pots.  In order to carry the pots and supplies we need our trailer.

TCM: Do you have any favorite Dutch Oven dishes?

Arlene: When it’s colder, we make a lot of soups and stews, like Brunswick or beef stew. We always have cobblers.

You would not believe the attention we get in the campgrounds.  We are making so many friends.  Once this gentleman came by our campsite and now we’re good friends.  We only met for a weekend.  When we were ready to leave, we extended our hand and he said, “I’ve got to have a hug”.  There are good, down to earth people out there camping.

Arlene: Let me tell you about Rodger’s first batch of biscuits.  He had not made them before and, with Dutch Oven cooking, there is an art to getting the heat just right.

Rodger: They were hockey pucks.

Arlene: He kept trying and has now mastered it.

Rodger: I have always had a knack for throwing things together and being creative when cooking.  To me, it’s a fun thing to do while camping.

TCM: Could you give us a recipe or two?

Rodger: Sure, here are recipes for Biscuits and Scalloped Potatoes.

Whisk together all of the dry ingredients (except the 1/2 cup flour for dusting) in a large mixing bowl.  Using your fingertips, rub the butter and shortening into the dry goods until the mixture resembles coarse crumbs.  Make a well in the middle of this mixture and pour in the buttermilk.  Stir with a large spoon until the dough just comes together.  Then knead in the bowl until all the flour has been taken up.  Turn the dough out onto a lightly floured surface, then start folding the dough over on itself, gently kneading for thirty seconds or until the dough is soft and smooth.  Press the dough into a 3/4 inch thick round.  Using a three inch cutter cut out biscuits.

Preheat a fourteen inch Dutch Oven including the lid.  Once you place biscuits in the preheated pan, use twelve coals on bottom in checkerboard pattern and twenty-three coals on the lid.  Bake about twenty minutes.  Makes ten to twelve biscuits.

Use a ten inch Dutch Oven, a sixteen coal in a ring on the lid, and seven coals on bottom in checkerboard pattern.

Mix milk, butter, and soup together in a small bowl.  Spray non-stick cooking spray in ten inch Dutch Oven.  Place a layer of potatoes on the bottom, then a layer of onions, and sprinkle a layer of grated cheese on onions.

Continue to alternate the layers until all the ingredients are used.  Then pour soup mixture over potatoes, onion and cheese.  Bake for one hour or until potatoes are tender.

Arlene: We do our own pork barbecue with Jack Daniels whiskey sauce.  We made it for Memorial day at home in our Dutch Oven pan.  For some reason, it didn’t taste nearly as good as when we’re out camping.

TCM: You mentioned in one of your early emails to us that you love antique shops.

Rodger: We love Antique Shops.  Traveling down the road my wife will say, “There’s one!”.  And I can do a U-turn in the middle of the road.

That’s another advantage of the pickup camper and trailer.  The trailer becomes overflow as we pick up antique odds and ends while we’re on the road.  We both enjoy finding antiques.

Angela, what’s so interesting is that we do it to the extent we do.  I’ll send you pictures of our collection of 1960’s diner memorabilia. We have connections all over helping us look for the diner antiques we’re interested in.

There’s a lady we met in Oregon who collects license plates from all over the United States.  She couldn’t find any Virginia plates, so we sent them to her in Oregon.  You meet so many interesting people on the road.

Say we are in Salt Lake Flats in Utah and someone takes our picture.  We will pick up some kind of artifact, rock, or even sand and put it on display with our picture in the display area of our house.  The cool thing is that at any given time we can wander through our little museum in our house and it brings back memories and we relive it all over again.

TCM: Why is Sherando Lake in Shenandoah National Park one of your favorite places?

Rodger: Because it’s so close, it’s easy for us to take for granted.  When we go out west and ask about the east, they comment about our trees.  They say, “I was in Virginia and your trees and forests are so fluffy”.

Arlene: There is no end to things that can be seen in our immediate area; from President’s homes to caverns to Civil War Battlefields, etc.

TCM: That’s certainly true.  Is there anything else you would like to add to your interview?

Rodger: We just went on a trip this Fall through the Dakotas, Wyoming, and Montana.  We did a big loop.  We also just picked up a brand new 2012 Arctic Fox 1150.

Arlene and I so compatible.  We get out and have a blast!  There are so many stories and experiences we have had while camping.  We could go on and on with stories and things that we’ve experienced camping.  It’s so much fun.  There are a lot of people out there who don’t know what they’re missing.

We have camped everywhere from Walmart parking lots to RV Resorts.  Nothing beats camping in a cozy pick-up camper!!

TCM: Thank you Arlene and Rodger.  Please keep in touch with your adventures.  We should catch up some time.  I sure would love to try some Dutch Oven biscuits and cobbler!

Rodger and Arlene: That would be fun.