Joel Holland – yes, the same Joel Holland who owns Harvest Hosts – not only bought a Cirrus 820, but has, on occasion, been known to camp with his family’s ferret.  And that’s not even where this funny story begins.  Ferret lovers, rejoice.  Fifth wheel owners, turn away now. 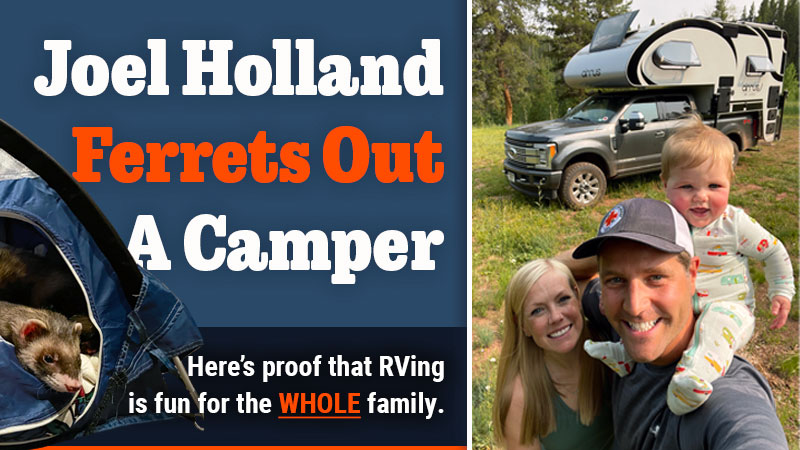 I don’t think I’ve ever laughed so hard during an interview than when Joel Holland casually told us – while listing family members and pets he goes camping with – that he sometimes takes his ferret.  When he told me how the ferret often gets lost, I darn near lost it.  That’s it.  Stop the magazine.  I’m going for a walk until the tears stop rolling.  Who goes the heck camping with a ferret?

This all started as a question we were going to include in our Harvest Hosts story, but Joel’s tales about his early misadventures with a fifth wheel, how he got into truck camping, and well, that ridiculously funny ferret thing forced me to make an executive decision.

We’re not burying the ferret and fifth wheel story.  And yes, the fact that the CEO of Harvest Hosts owns (and some might infer prefers) a Cirrus 820 truck camper is also relevant.  Add the fact that he’s been quite brazen with his off-road truck camping adventures and you have yourselves a worthy second story.  With a ferret.  God help me.

If you’re looking for a deep dive into Harvest Hosts, check out Joel’s first story, Beauty Parking with Harvest Hosts.  If you’re in the mood for a bit of fun and perspective on what owning a truck camper is all about, keep reading. 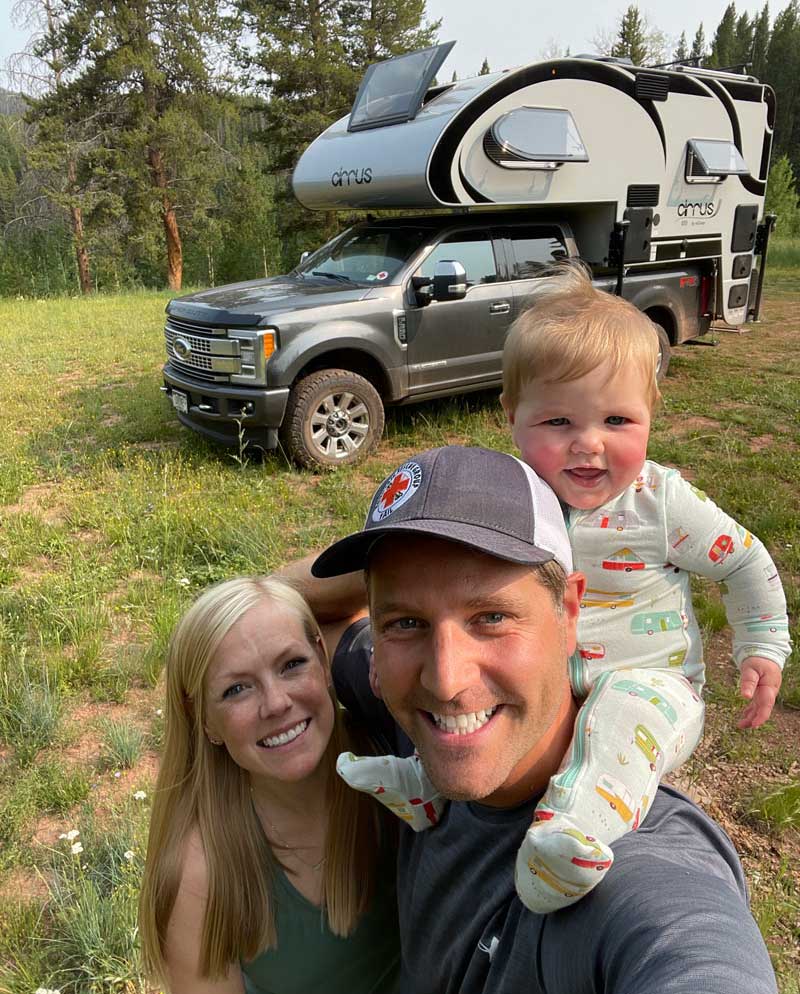 Above: Joel, Mary Ashley and Waverly go camping in their Ford F-350 and Cirrus 820

We last spoke about how you became an entrepreneur, got into RVing, and purchased Harvest Hosts. All of that is interesting, but what we really want to know is how did you get into truck camping?

We had our first fifth wheel for five years. I ended up in an accident that totaled that rig. A semi-truck cut me off on the highway and destroyed the unit. I was fine. Luckily, my wife, Mary Ashley wasn’t with me. I was picking the unit up to go on a trip. The truck didn’t even know he’d run me off the road. Insurance paid for the unit and we very quickly replaced it with another Grand Design fifth wheel. 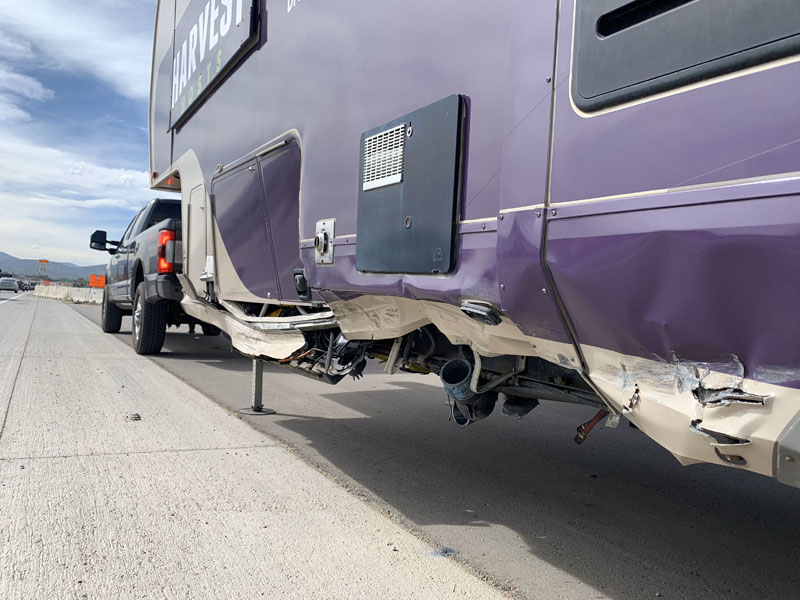 We went even bigger. It’s a fallacy that many RVers fall into; if you’re going to get a new one, go bigger. The Solitude is taller, longer, and heavier. And it is really nice, of course. When we’re at an event like the Albuquerque Balloon Fiesta for ten days, the little mansion on wheels is awesome. We had our daughter and two cats in there with no problems.

What finally pushed us towards a truck camper is that we had our daughter, Waverly, and we love tent camping. We go tent camping a lot here in Colorado and wanted to keep tent camping. We realized we really couldn’t put a toddler in a tent, but we could put her in a vehicle we take off-road.

So we started looking at options. We looked at the whole van thing. Ultimately we didn’t want another vehicle and engine. We already had a Ford F-350 with tons of towing capacity. I just love it. It’s like family. So naturally, we thought, let’s look at truck campers.

We stumbled across nuCamp. I knew nuCamp through their teardrops and didn’t even know they made a truck camper. When we saw the Cirrus 820, we loved it. The interior was so well laid out. We loved the neutral colors and the greys. It felt like a little boat inside. Even though it was small, it felt like an amazing use of space and quite luxurious for something that sits on the back of my truck.

This was now a year and a half ago. The dealers had no units to sell due to the high demand at that time, so I put my name on a list with a bunch of dealers. We constantly checked in, and eventually found one nearby. It was lacking an awning due to the shortages, and the dealer was willing to sell it to me at full MSRP. No discount. Finally, I said, ‘screw it’ and bought it. 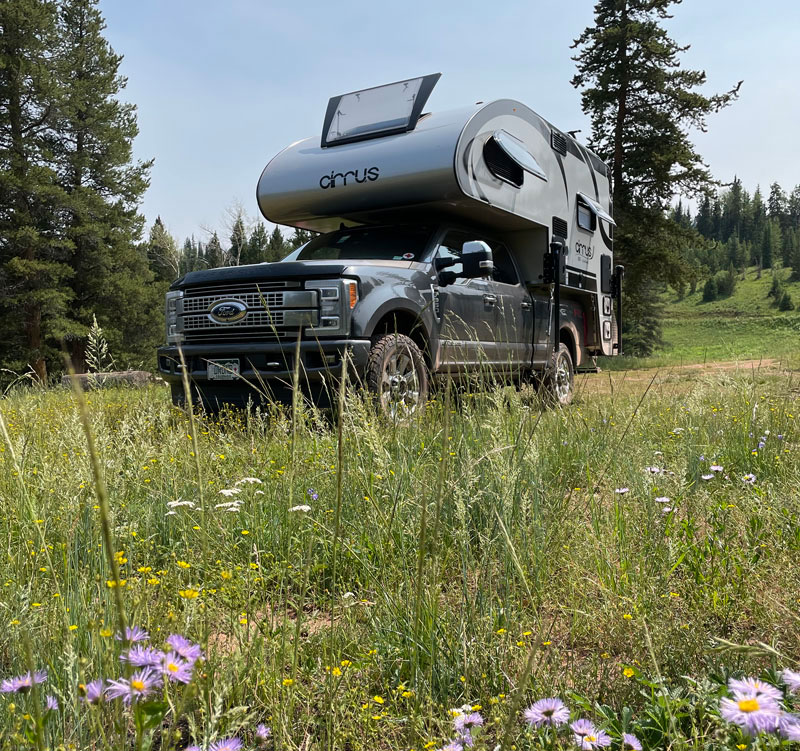 We’ve had our Cirrus 820 for a year and taken it on epic backcountry trips. I have put it to the test for what a truck camper can do because I don’t know any better. So far I haven’t broken it, and I haven’t flipped it.

We’ve also taken our truck camper on road trips. Earlier this year we had a wedding in Sun Valley, Idaho and we were weighing the pros and cons of driving versus flying. Driving was an 11-hour trip. Flying was fast, but flying these days is like cattle being herded. So we drove.

That trip was so much fun. We stayed in Utah at state parks, which we were never able to do with our big fifth wheels. We camped in awesome little campsites. Of course, we also stayed in some amazing Boondockers Welcome locations that we might not have fit into with the fifth wheel. The last Boondockers we went to was driving through a farm on a dirt road. The truck camper was perfect for all of it. 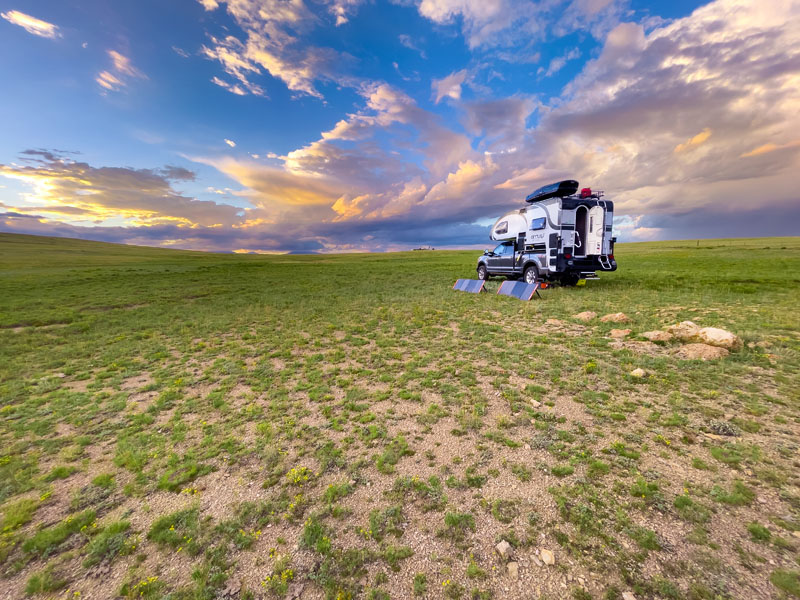 Above: A Boondockers Welcome location in Fairplay, Colorado

Now we keep the truck camper in our driveway. I keep the camper plugged in because I try to use it through the winter to go on skiing trips around Colorado. Our fifth wheel is in storage in Denver where it will sleep until spring.

Why would you still take the fifth wheel out now that you enjoy the freedom of traveling and camping in the truck camper so much?

I said this to my wife the other day. Knowing what I know now, I wish we had gone with a truck camper when it was just the two of us. It’s a no-brainer. We should have been traveling in a truck camper. That first fifth wheel was totally a wrong decision, but we really didn’t know any better. Now that we have our daughter, two cats, and a ferret, sometimes we need the larger RV.

Wait. You’re killing me. Did you say a ferret?

Yes. That’s too much for a truck camper. 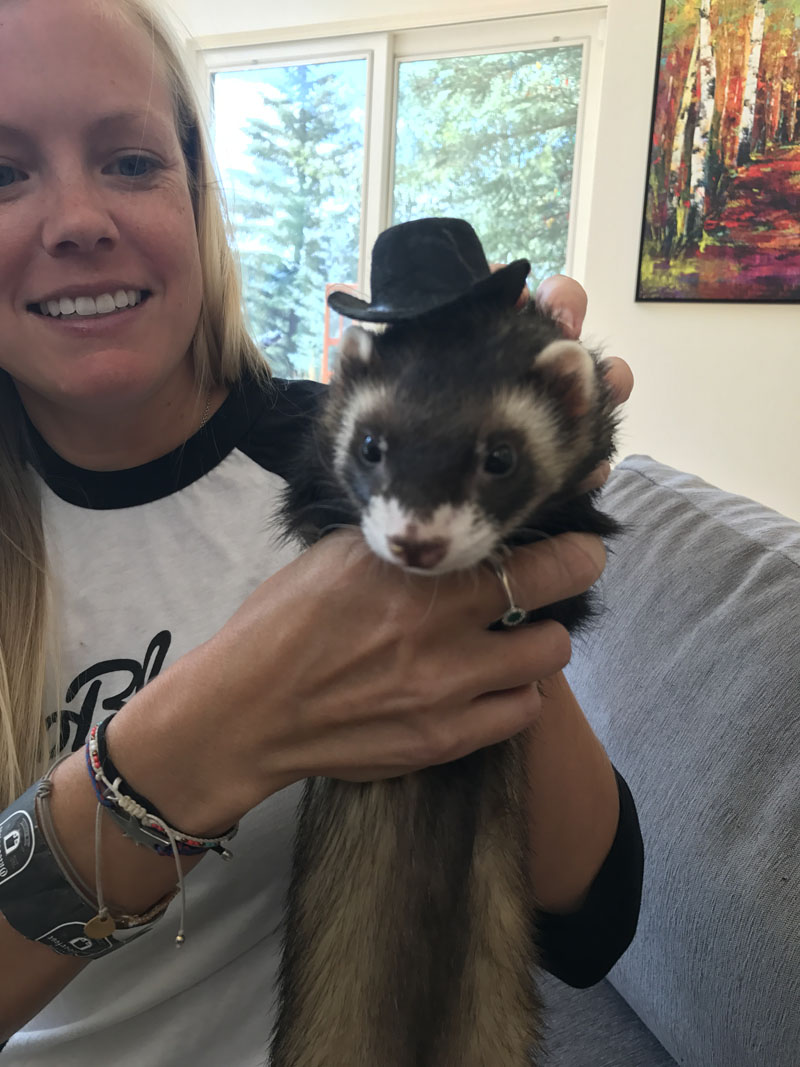 We’re going to need a picture.

Yeah. I have a picture of him in a little top hat for the wedding. So cute.

Ferrets are funny in RVs. They’re like little Slinkies that get into everything. So we’ll lose him in the RV and he’ll wind up under a storage space somewhere. We are safe from rodents because he’ll go ferret them all out. 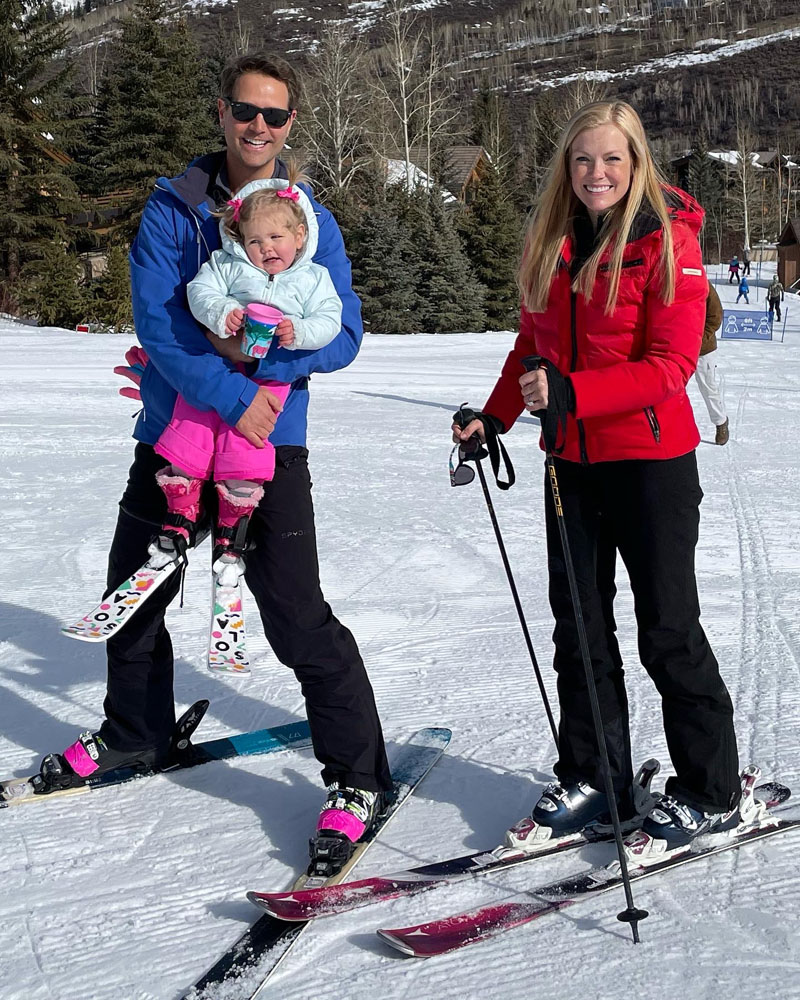 Above: Joel, Mary Ashley and Waverly

Ha. Ha. So where were you when you said you hadn’t broken or flipped your truck camper?

I really like climbing the 14,000-foot mountains in Colorado; the Fourteeners. There are 58 of them and they’re all over the state. A lot of them require four-wheel drive to get to the base camp. I’ve taken the truck camper rig to three of them and had a blast.

Getting to these base camps often includes rocky roads and steep inclines. I had one the other day where I was pretty sure I could navigate the boulders without bottoming out the truck, but I wasn’t sure what 3,000 pounds in the bed of the truck was going to do to that experience. But I decided to go for it, and it was fun. I now know the angle I can go down. I have not put it to the side-to-side test and I won’t. I’m really not interested in flipping it, but these things can take a lot. 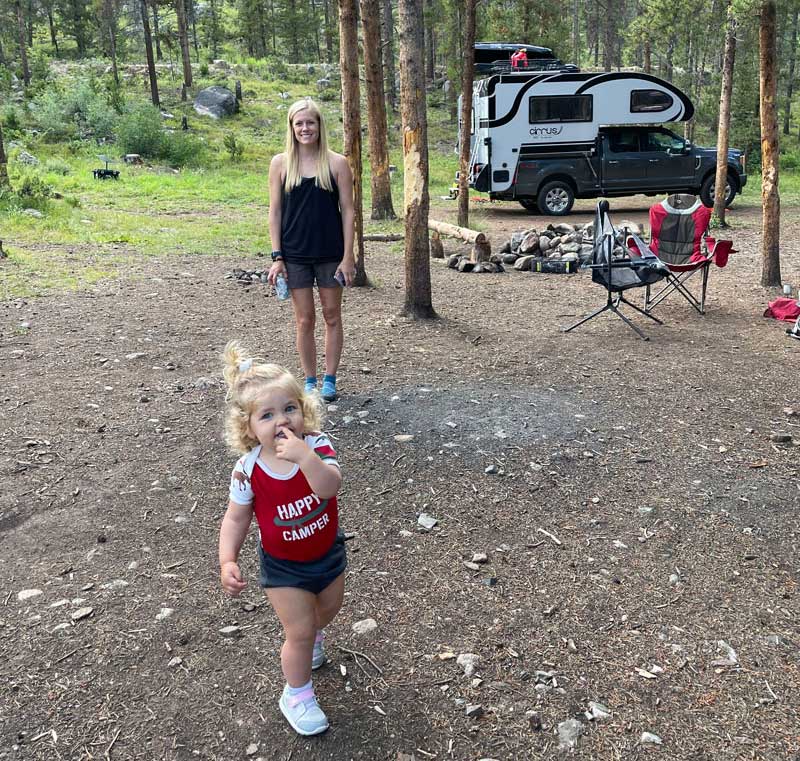 It sounds like owning a truck camper has changed your perception of RVing.

Absolutely. Owning a truck camper has opened our eyes to where we can go. What adventurer doesn’t want to get into a truck with living quarters on the back of it? It’s perfect.

Living in Colorado there are a lot of truck campers. My wife and I will sit on the couch and look at a map of our state to see where we haven’t been yet. Then we’ll take the truck camper out for the weekend. It’s perfect to take Waverly, leave the cats with a sitter, and go. That’s been really cool. It opens the world.

RVing with a fifth wheel is restricted to main arteries; highways and some byways. In our truck camper, every backcountry road is interesting instead of horrifying. I love that.

We like to drop into antique stores. We’ll see a sign and pull off and go. I wouldn’t normally do that with the fifth wheel because of the uncertainty of what I’m going to get myself into. It’s really comforting to be in a truck camper and know we can go anywhere.

If you haven’t read Joel’s story about how he became CEO of Harvest Hosts, it’s worth checking out Beauty Parking with Harvest Hosts.  Click here for more information about Harvest Hosts and Boondockers Welcome.