Dave Ruane ventures out on Friday afternoons and finds a boondocking spot in the dark of night.  Where he wakes is the real surprise. 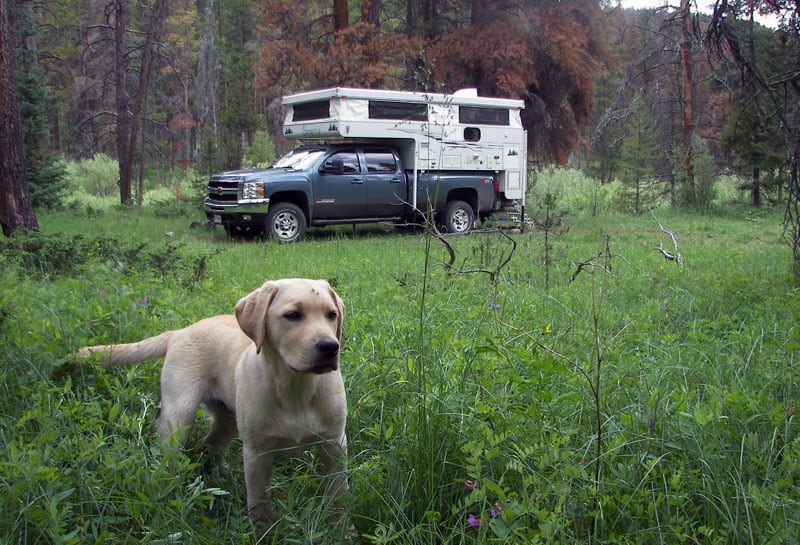 Above: Cooper Near Rawah Wilderness

Some truck campers plan their trips weeks, months, or even years in advance.  Before they leave their homes, they know every road they’ll travel, every destination is booked, and nothing has been left to chance.  Even the fuel stops are pre-programmed into the GPS.

Other truck campers have a somewhat less planned approach.  They might have an idea of where they’re going or a concept of how they’ll get there.  Then they throw caution to the wind.  In fact, it’s the opportunity of letting the trip take you that calls them to adventure.  Who knows what unforeseeable event will happen?  Just put the map down, hit the gas, and wing it.

Dave Ruane is somewhere between these two camps.  On one hand, he has his favorite destinations and events that he enjoys attending.  On the other, he likes to venture out as the sun is setting and find a boondocking camp spot by GPS, intuition, and headlights.  Does he get himself in trouble with his carefree approach?  He sure does!  And from what we gather, Dave wouldn’t have it any other way. 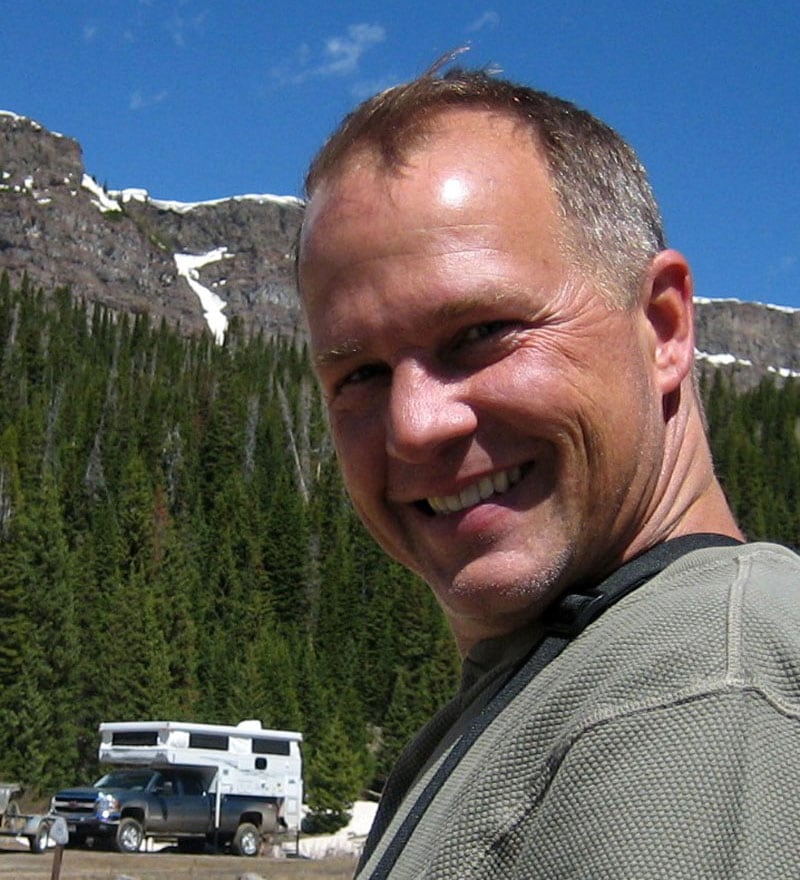 A good friend of mine who goes hunting has owned a couple truck campers.  I originally thought they were the worst type of RV to have because they placed all of the weight in the back of a truck.  Then I started camping in my friend’s camper and quickly realized that I needed one.

My truck camper gets me anywhere my truck can go.  That’s a big thing.  I’ve hauled a pop-up trailer, a toy hauler, and a travel trailer.  By far, my truck camper has been the best RV I’ve used because there’s no towing and no stress.

The truck camper has just the perfect amount of space and it gives me all the amenities I need.  It also keeps me warmer than a bigger RV could.  And I like having the hitch because I can pull an ATV and my Harley.  It’s perfect.  Like I said, going anywhere is the big thing.  I love it! 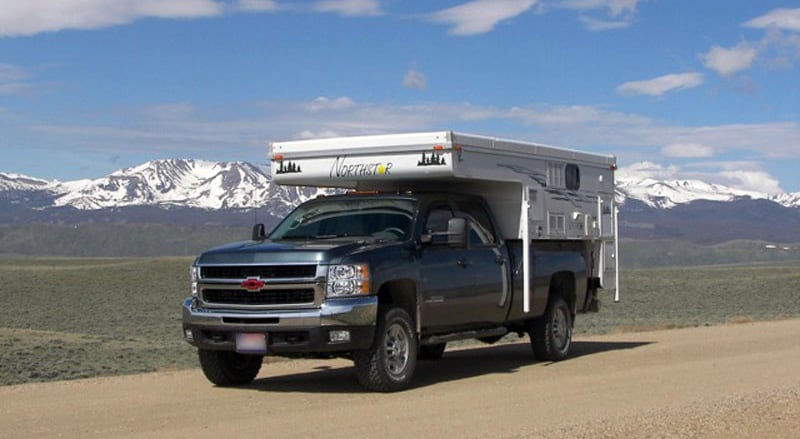 Why did you choose a Northstar pop-up truck camper?

Pop-up campers definitely have lower clearance and they’re very lightweight.  As I’ve spent some of my adult life in Iowa, it was neat to me that Northstar Campers are made there.  The Willetts are great and I’m big into brand loyalty.  I really think Northstar is an excellent family business.  And they make a great camper. 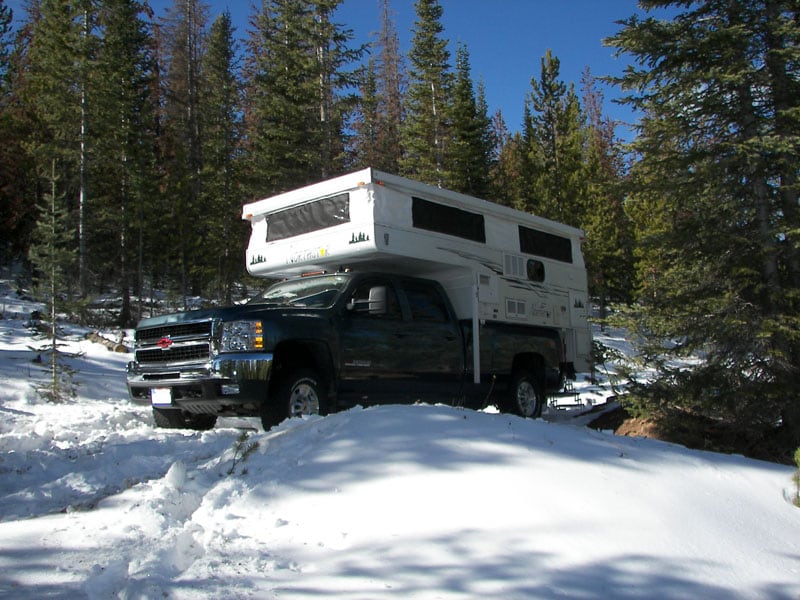 Above: A little snow in mid-October at a campsite North of Kremmling, Colorado

Walk us through the process of how you pick a place to camp.

First, I pick a general area that I want to visit, like Aspen or the Bighorn Mountains.  Then I open Delorme “Topo” topographic maps on my computer.  Delorme’s software package also has Forest service roads.

For example, I’ll look at Roosevelt National Forest.  I can tell by the color of the shading on my topographic map if it’s public or private land.  Even the National forest campgrounds with their ten to twelve spots are usually identified.  On the forest roads, I can pull off anywhere and camp. 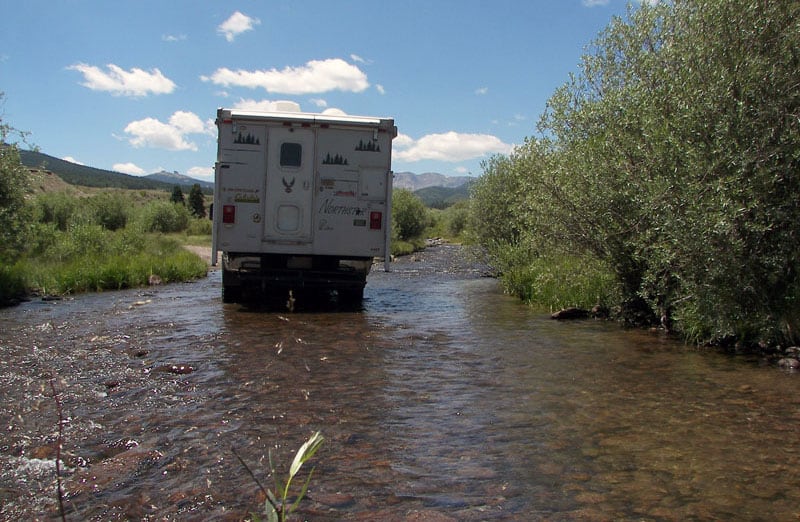 When I’m planning, I’ll look for areas that may have wildlife or a place I can go fishing or a place to just get away from other people.  I usually pick by feature.  I like it when there’s canyon or it looks like there’s a meadow or stream nearby.  I also look at the accessibility to the road and if there’s a nice forest road.  If there’s a campground nearby, I’ll try to avoid that area because that usually means that there’s a lot of people around. 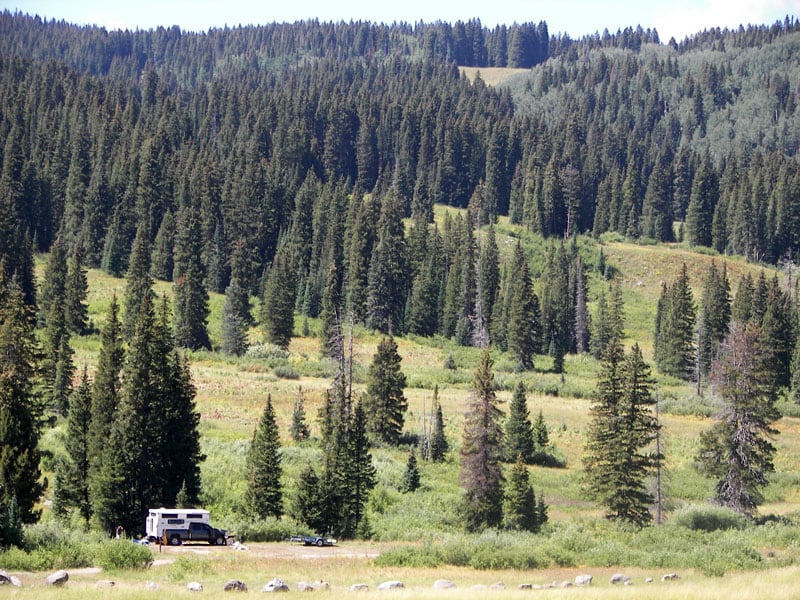 Above: Camping along a Jeep trail in the Grand Mesa National Forest near Colbran, Colorado

The Delorme Topo software gives me GPS coordinates, so I’ll plug them in and head off.  I have a Kenwood DNX 7100 with a built-in Garmin GPS that I use all the time.  I also have a handheld Garmin that gets me into places.

“There have been times when I have gotten lost or gone in circles and realized it when I have seen the same log three times.” 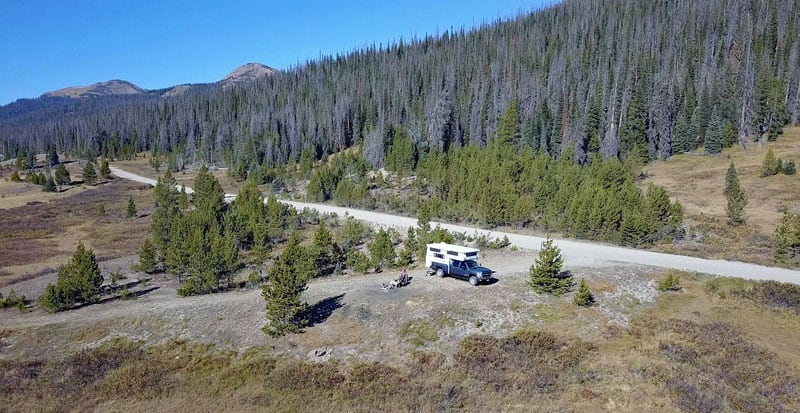 It seems like you shoot from the hip when choosing spots to camp overnight.  Have you ever gotten yourself in trouble with this strategy?

Yes.  There have been times when I have gotten lost or gone in circles and circles and have realized it when I’ve seen the same log three times.  I leave on Friday afternoons and I’ll often be driving at night with only the light of my headlights.  I’ve nearly run off of the roads a few times.  I’ve also gotten myself into places where the road didn’t exist anymore.  A few times I didn’t trust the GPS and tried to take a short cut and it didn’t work out.  I’ve learned that usually the GPS knows best. 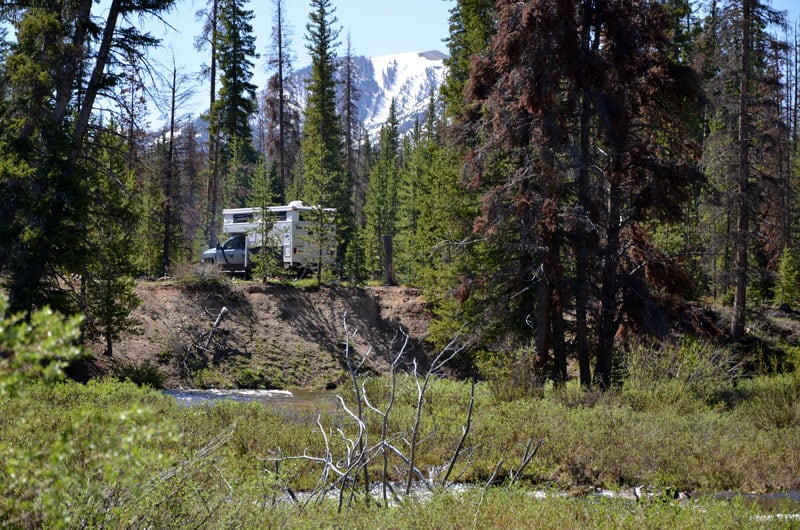 “Driving in at night, it may look like I am just around a bunch of trees.  The next morning I will wake up in the sunlight and I’m like, Wow!”

If you are driving at night and choosing a boondocking spot in the dark, you must wake up in some interesting places.

That’s true.  Driving in at night, it may look like I am just around a bunch of trees.  I can’t see what’s above the beams of the truck’s headlamps.  The next morning I’ll wake up in the sunlight and I’m like, “Wow!”.  I’ll discover a great mountain view or a stream. 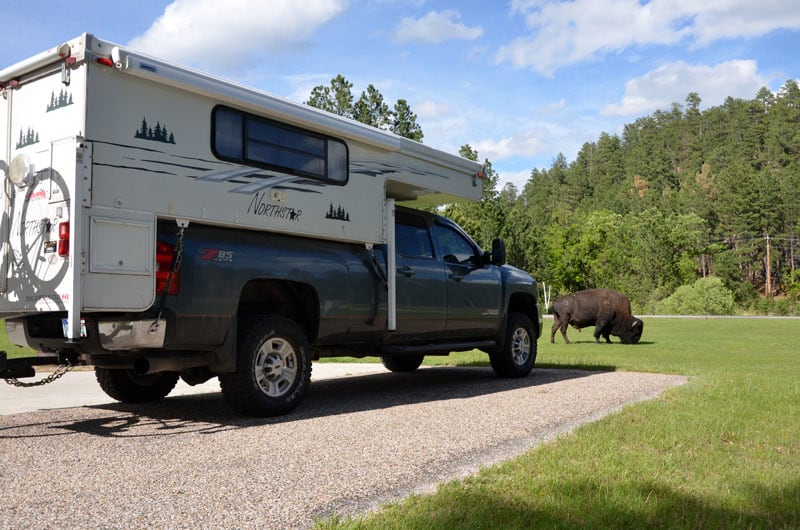 Above: A buffalo near Hill City, South Dakota

I’ve been woken up by moose splashing in the creek behind me.  I’ve also woken up and found that I’m just at some random spot along the road.  Once I woke up on a contour road.  A contour road is where you’re on the side of a mountain and one way you’re looking up and the other way you’re looking really far down.  That was an amazing experience. 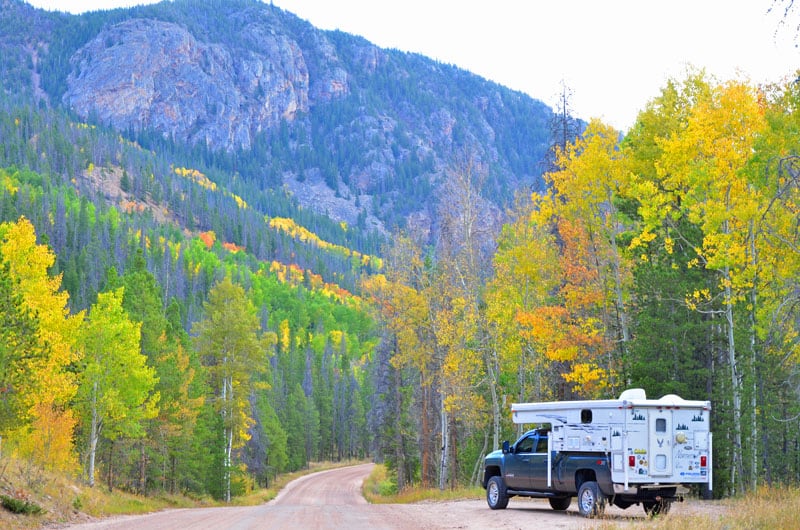 Above: Laramie River Road in Colorado

Most of the time I’ll go out on two and a half or three day weekends.  I’ll leave at two or three o’clock on a Friday and get back on Sunday night.  After an hour and a half drive from my home, I’m in the deep woods and I won’t see anyone all weekend.  That’s what I prefer. 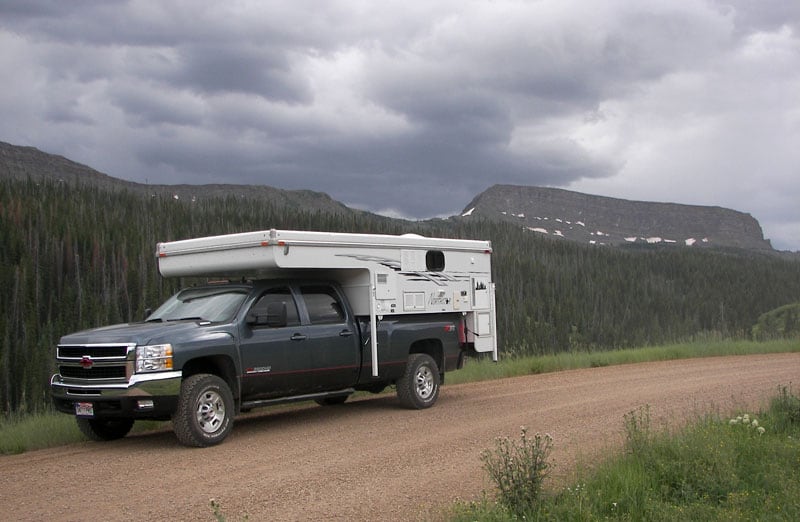 Above: Near Stillwater Reservoir in the Flat Tops Wilderness

In addition to my weekend warrior adventures, I’ll usually take a full week in the Spring and another full week in September to go camping. 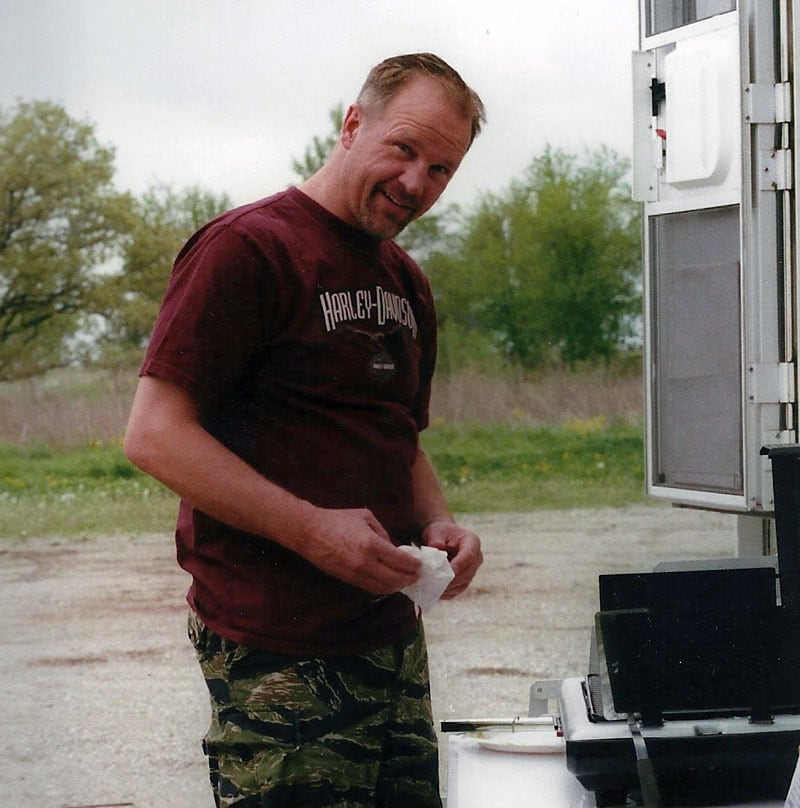 Above: It’s very important to eat well on a camping trip.  Dave ensures all of his camping mates get their fill.  Ribeye steaks were on the menu on this Missouri Turkey Hunting road trip.

You’re quite the camping chef.  Tell us about your gourmet truck camping.

I like to have at least one really good meal while I’m out camping.  My friends joke that I cook better out camping than I do at home.  I’ll make spaghetti, grilled steak, or chicken.  I’ve been known to bring a fryer and cook up chicken wings.  I have a little Coleman grill that’s perfect for just me.  If it’s more than just me, I’ll use my big Coleman Road-Trip Grill. 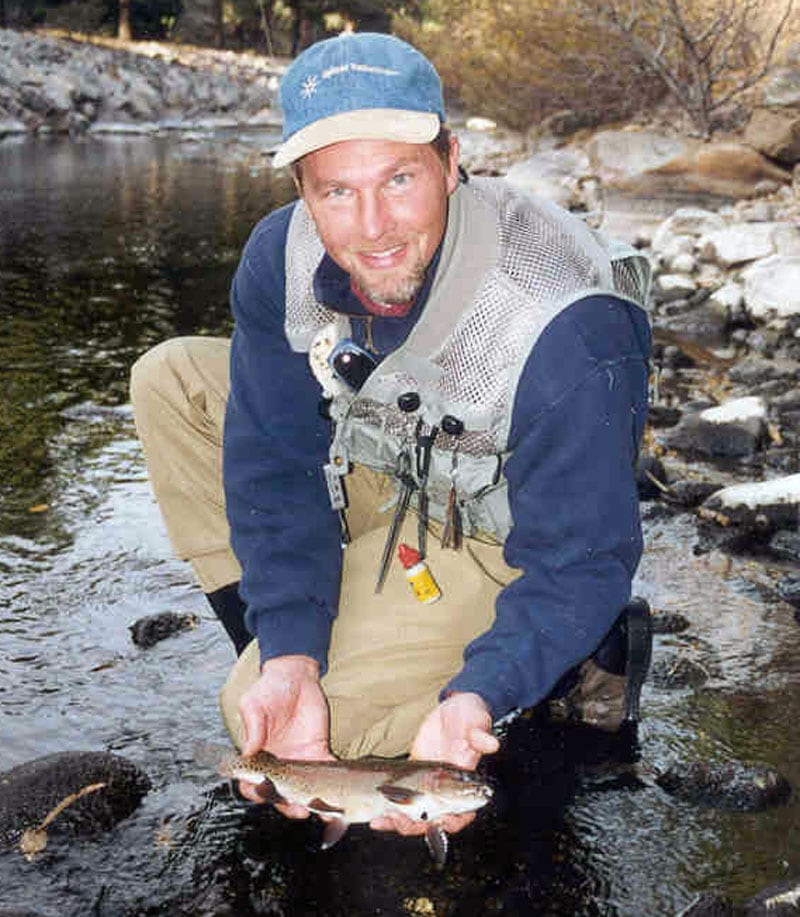 Above: The truck camper makes it easy to be eating fresh trout after a hard day of fishing! This trout was from a river in Central Wyoming.

You also enjoy hunting, fishing, and archery.  How does your truck camper help you with these interests?

My camper is fantastic because it can get me to close into where I want to hunt or close to the stream where I want to fish.  Anywhere my truck can go I can go with my camper. 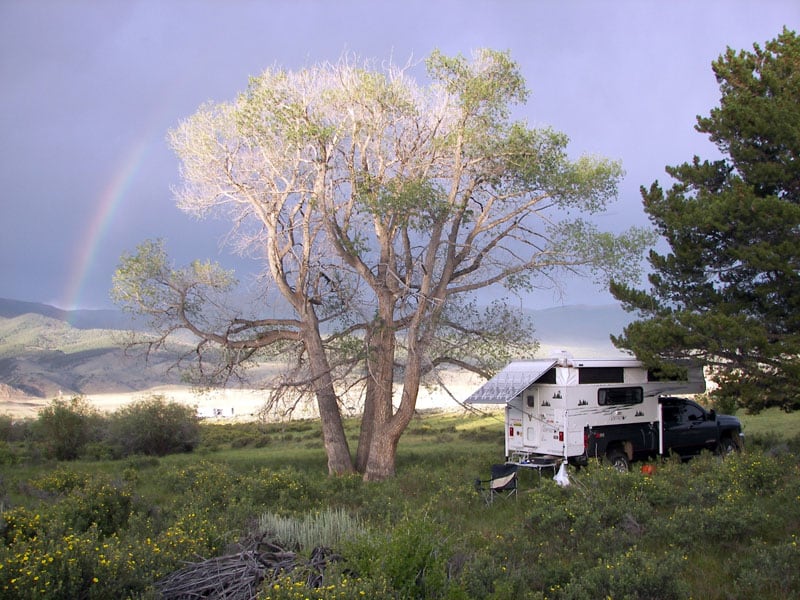 Above: Dry camping near Leadville, Colorado

Here in Colorado, you may need to drive a mile before you can turn around or back up.  With my truck camper, I can just back up. There’s no way you can do that with a towable.  Also, trying to tow a trailer up a snowy road or through the mud is a hassle.  I’ve gotten stuck with my truck camper, but there’s always a way to get out. 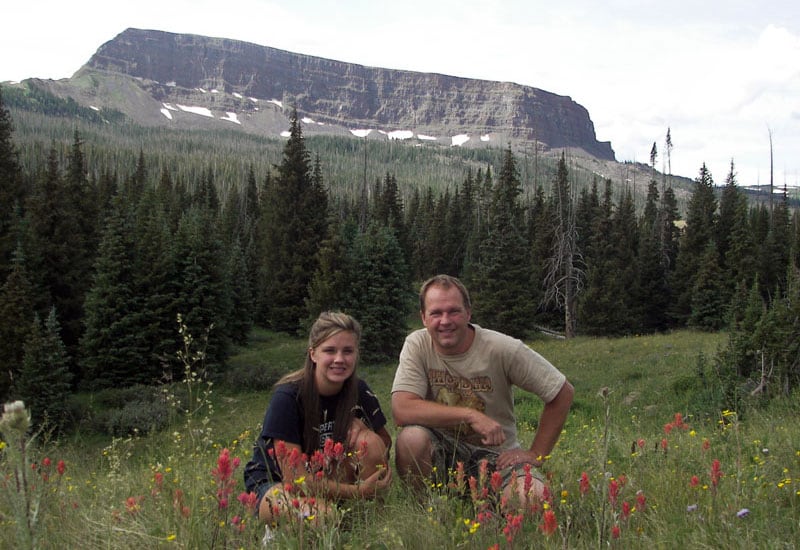 Above: His daughter, Aspen, was named in Iowa before he had any idea he was going to move to Colorado

What else do you like to do when you go truck camping?

I am an avid naturalist and outdoorsman, so much of my camping is accompanied by hiking, wildlife watching, birdwatching, searching for reptiles and amphibians, fishing, hunting, climbing and four-wheeling.

Every year, I travel 1,000 miles to Missouri to go turkey hunting.  Sometimes I’ll take my Harley Davidson motorcycle.  I also take my radio controlled airplanes or shoot cans in my downtime.  My archery equipment almost always comes with me and I’ve got a really nice camera.  I always go looking for wildlife. 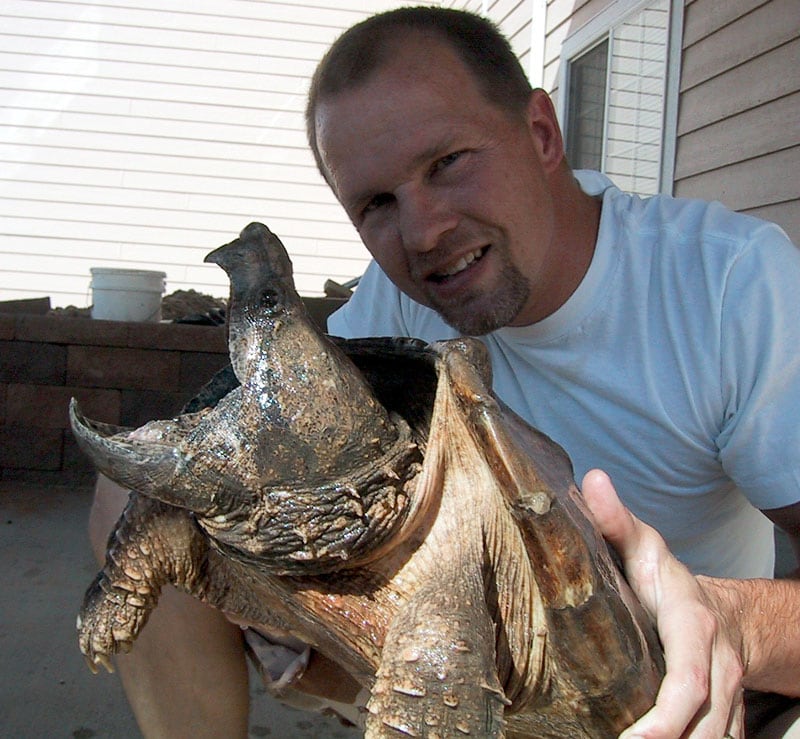 Above: Dave likes turtles! His truck camper stops for critters crossing the road.

With the reptiles, I’ll go out and find new species.  I used to go to Illinois and camp along Mississippi river and watch the turtles out there laying eggs.  I’ll also lift up boards and look for snakes.  I get really good pictures of wildlife that way. 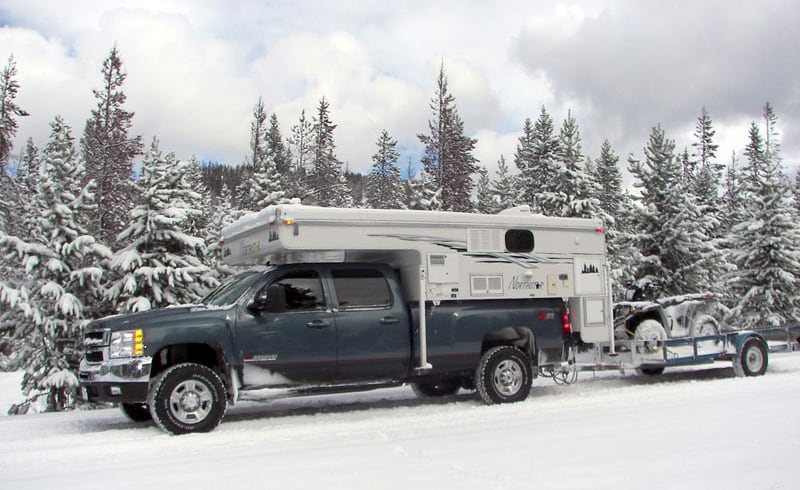 Above: Dave won the calendar with the above photo.  It’s up by Owl Mountain in Jackson County, Colorado.  There was no snow in sight on the way up, but eight-inches fell overnight. 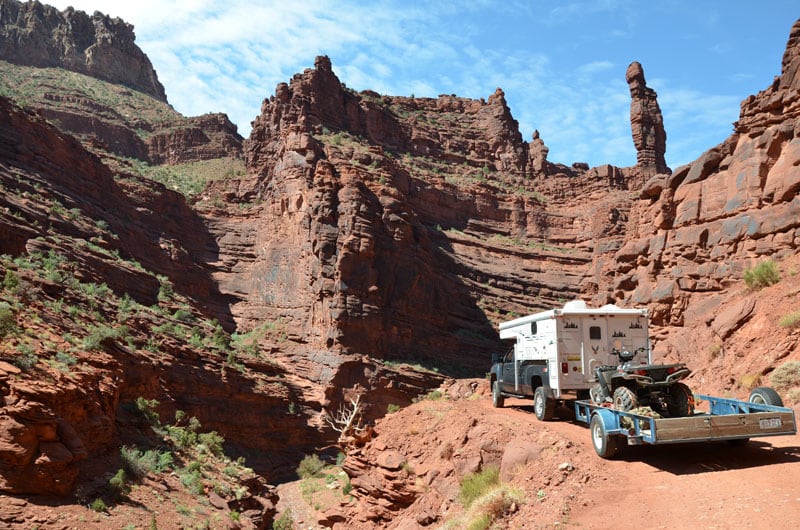 Above: Towing his ATV on Onion Creek Road near Moab, Utah

I bet you do!  What do you tow with your truck camping rig?

Having a truck camper makes towing my ATV or Harley Davidson easy.  At the bottom of the Jeep trails there’s usually a place to lock up the trailer.  Sometimes I don’t want to bounce it all around.  The dogs are my camp guards, but I usually go places where very few people are going. 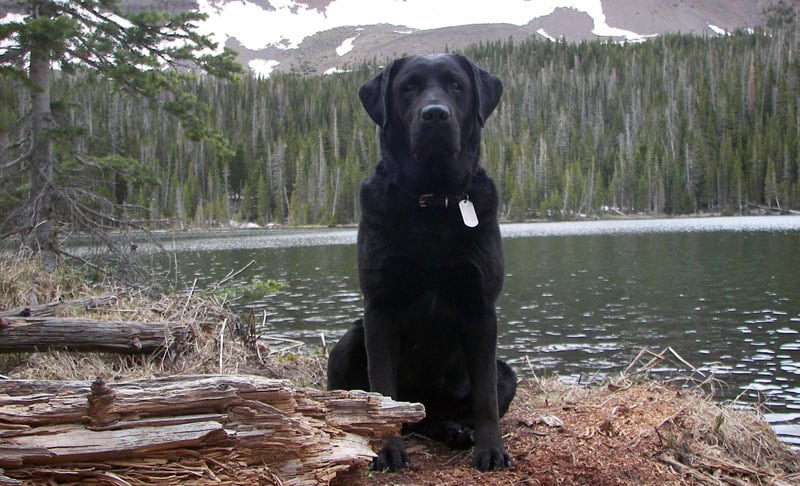 Above: Gracie is a happy camper – on guard near Smith Lake – a remote mountain lake in the Flat Top Wilderness area

How do your dogs like truck camping?  We were actually at a show last weekend and some people were telling us that they thought truck campers were too small for their big dog.  What would you say to them? 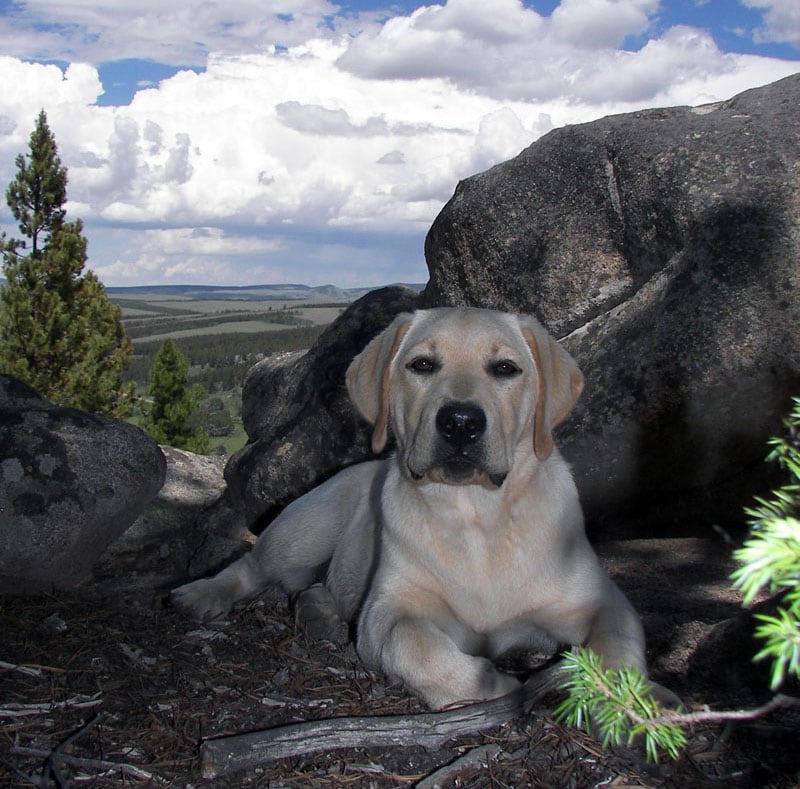 Above: Cooper loves to go hiking. This overlook is at the Deadman Road area just east of the Rawah Wilderness Area.

It works out fine to have the dogs with me.  Seriously, I had my two full size labs with me recently when I went camping and they have plenty of room.  Sometimes I help the older one get down out of the bed, but I’ll put the table down and she’ll jump right down. 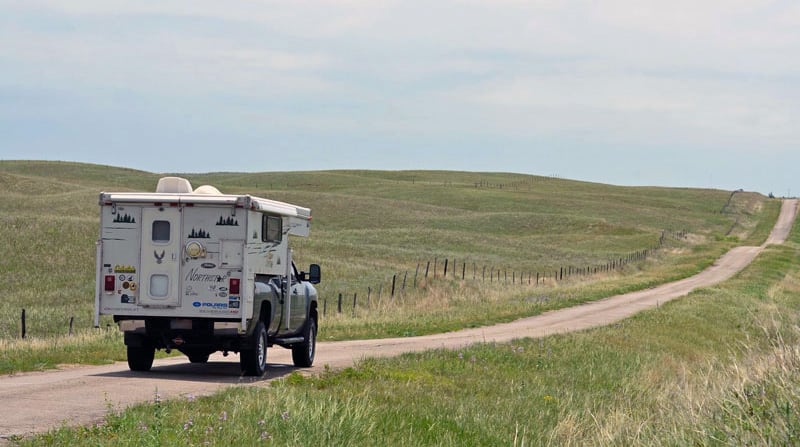 Above: The Nebraska Sandhills

You called yourself a “Gadget Geek” in your email to us.  What kind of camping gadgets do you have?

I’ve got the GPS and my iPod is hooked up to camper.  I have electronics like a display for the voltage of my batteries.  In the truck, I have a radar detector, back-up sensors, and a back-up camera.  You name it.  I’m always looking for gadgets.  The next thing will be a weather station in the camper.  I’d like to set up one that has a wind speed and direction sensor, a rain sensor, and the temperature and humidity.