Henry and Charlotte travel Alaska and the Lower Forty-Eight every year visiting friends and family, ATVing, boating, and fishing, from coast-to-coast.  Want to know the best Alaska route?

The idea of one day living full-time in a truck camper is a recurring topic at Truck Camper Magazine.  We are fascinated with the daring notion that you can sell your house and live on the road.  It’s not against the law.  It’s not even that difficult now that you can do so many things over the internet.  Maybe someday we’ll take that leap.

Until then, we really enjoy having a permanent home base.  Even when we’re on the road, there’s something reassuring about having a house to return to.  It’s almost impossible to imagine what it would feel like to be on the road without a house to anchor the beginning and end of our adventure.  Perhaps it would be liberating.

The story of Henry Huizenga and Charlotte Webb brought this intriguing topic up for us once again as their lifestyle threads the, “full-time-or-not” needle in a way we’ve never quite seen before.  For one, they have two trucks, a truck camper, a fifth wheel, and a house in Alaska.  For two, they spend almost all of their time either in the truck camper or fifth wheel, even when they are home in Alaska.

Believe it or not, this isn’t the first time we’ve encountered folks who stay in their campers when they’re home.  It seems odd, but they explain that they are more comfortable in their campers than in their house.  There is a certain coziness and fun to living in a truck camper that is unequaled in our experience.

By example, Henry and Charlotte have presented us a new possibility; living full-time in a truck camper while still owning your house.  They let their daughter stay in theirs, but to take this concept one step further, why not rent your house for a year, allowing it generate income for your travels, after which you can decide if full-time truck camping is right for you?  With all of the potential complexities of renting, we’re not sure we like that idea, but it’s certainly interesting. 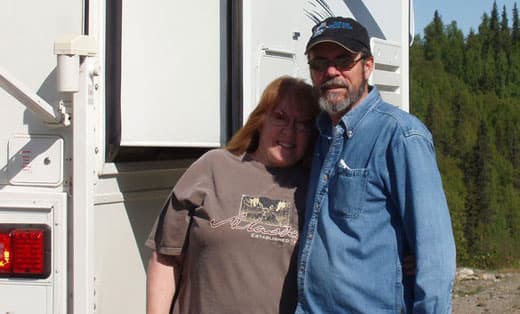 Above: Henry and Charlotte with their 2004 Arctic Fox 860

Henry: I blame getting a truck camper on Charlotte.

Charlotte: When we got married he had a Toyota and a motorhome and I had a Buick.  We traveled in his motorhome, but I said that I’d prefer a Chevy truck and a truck camper.

That prompted Henry to look on Craigslist where he found a camper that had been used once by their grandkids and the truck had less than 20,000 miles on it.  He said, “Someone was listening to you”.  It was a heck of a deal and the rig was in Kenai, which is a couple hundred miles from where we live.  We bought it that day and brought it home.

Finally he relented and said, “Okay”.  The next two years we were traveling in the truck camper.  Right now we have two rigs.

Henry: Now we have two trucks, a truck camper, and a fifth wheel.  I have both trucks configured to pull the fifth wheel, but only the Chevy for the camper.

Above: Fireweed in Alaska

TCM: Since you know the lifestyle of using a fifth wheel versus a truck camper, what would you say are the advantages of both? 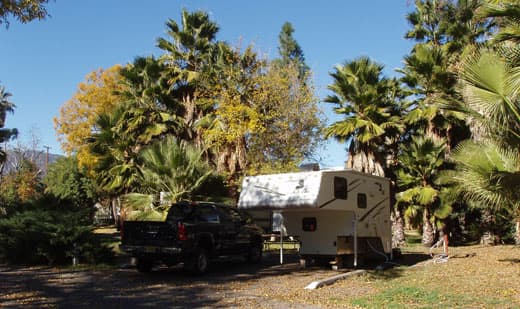 Charlotte: In the lower forty-eight we go from one coast to another.  We are one week here and two weeks there.  We visit our children, cousins, brothers, sisters, and friends.  We stay at their houses from one day to three weeks.

Ninety-nine percent of the time, we’ll stay in their yard in our truck camper.  With the fifth wheel we have to stay in an RV park.  That becomes expensive.  With the truck camper we can park in most driveways.  We’re there in the morning to have coffee with them.  If we have the fifth wheel, sometimes we have to be forty to fifty miles away from where we are visiting to stay at a campground. 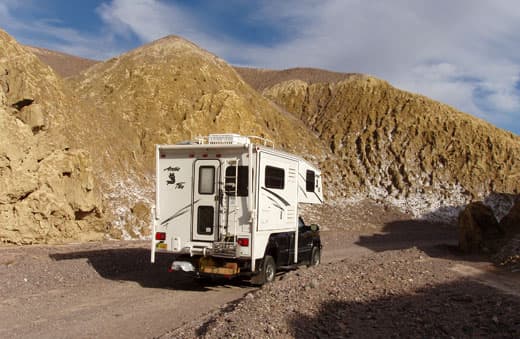 TCM: Tell us about your truck camping lifestyle.

Charlotte: In addition to visiting friends and family, we take two side trips every year.  We go out to the Arizona BLM land for a couple of weeks and mess around.  We always plan another trip of some sort, like down to Florida or like next year we want to go to Newfoundland. 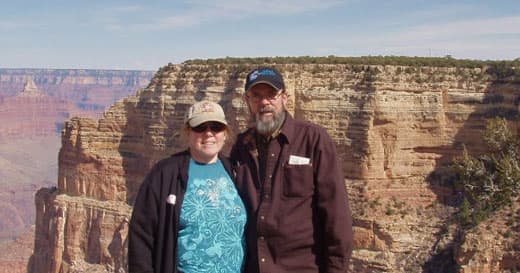 Above: Henry and Charlotte at the south rim of the Grand Canyon

Henry: We have kids in Alaska, Georgia, Kentucky, California, and Maryland.  We see all the kids twice a year.  We’ll go from East Coast out to California and then go back in reverse.  Charlotte will go and see her sister in Las Vegas, and I’ll fly back to Alaska for the Polar Bear Plunge  charity that I’m involved with.  Then we’ll go to California and then east again.  I put 36,000 miles on our trucks every season. 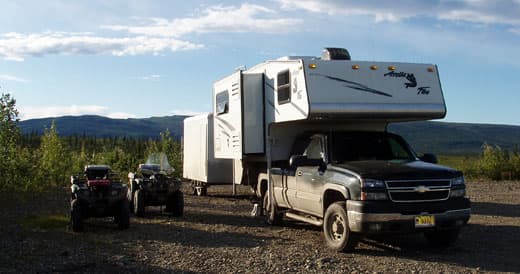 Charlotte: When we are in Alaska, we don’t spend much time at home.  We are always out camping, four wheeling, hunting, and fishing.

Henry: We have an RV pad next to the house with full hookups.  We’ll stay in the fifth wheel for the few days in the summer that we’re home.  Our daughter lives in our house in Alaska.

Charlotte: She takes care of the house.  It is safer to have someone we know taking care of it.  Then, when we’re home, we can go inside to use the laundry.

Henry: Our biggest challenge of being on the road is our medications.  One of our family members is also retired military, so we have an agreement with the military hospital that he can pick medications up for us.  Our daughter in Alaska works for FedEx. He brings medications to her.  She gets our regular mail and medications, boxes them up and sends them to us.

Charlotte: Everything else can be done on the internet. 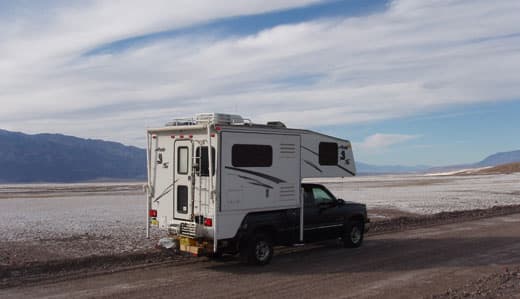 Henry: We have a Verizon MiFi mobile hotspot for internet access.  There hasn’t been anywhere we haven’t gotten it.  I can’t say that about our AT&T cell phone, though.

TCM: We love Verizon’s mobile internet service too.  We had a MiFi and now we use our iPhone as a MiFi device.  We haven’t tested the iPhone on the road like we did the separate MiFi, but we’ll be doing that soon enough.  Is there any state you haven’t been to?

Henry: The northern New England states of Maine, New Hampshire, Vermont, and Rhode Island.  We’ll go through some of them when we travel to Newfoundland.  We typically travel the northern route in the warmer weather and the southern route in colder weather.

Charlotte: Our main goal in the winter is to stay away from the cold and the snow.  Of course, we were in a blizzard a couple years ago in El Paso and this year in Tucson it snowed.

TCM: It’s been a crazy year for weather.  What do you tow with your truck camper?

Henry: We tow two Yamaha Grizzly 450s equipped with winches.  We take our Yamahas all over Alaska into places you could not walk.  We enjoy trail riding, fishing and hunting.  During the winter, the Yamahas come with us to the lower forty-eight where we ride trails.

TCM: We saw your awesome rig all together with your ATVs when we had our towing article.  Where are some of your favorite places to go ATVing?

Henry: There’s a trail in northern Wisconsin called the Tuscobia State Trail.  It’s for ATVs in the summer and snowmobiles in the winter.  The trail is near Charlotte’s aunt’s house and it runs seventy-five miles.

Charlotte: It’s an old railroad track from many years ago.  Now they groom it for ATVs and snowmobiles.

Henry: In Alaska we go ATVing anywhere we want.  In Arizona we ATV on the BLM land.  There are miles and miles of trails there.  We hit Quartzsite, Yuma, and a Marine Corp camp at Martinez Lake, which is off the Colorado River.

Charlotte: We also have two inflatable boats.  We have an eleven foot inflatable boat with an electric trolling motor that we take out on the lakes.  The bigger one we tow because it takes too much to inflate it on site.  The smaller one goes in our trailer. 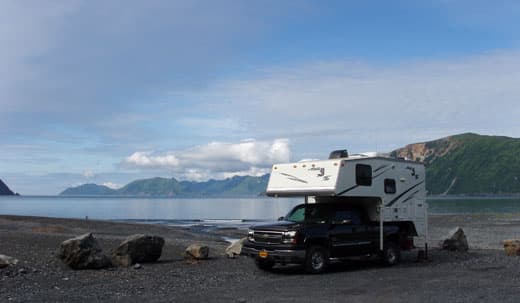 Henry: Most people coming up from Lower Forty-Eight are pressed for time.  You need at least a three or four week vacation.  It will take you a week to get up and a week to get back.  If you are coming from the Midwest or the East Coast, go north up through Minot, North Dakota and up the Alaska Highway, and into Dawson Creek and Tok.

If you have lots of time and want to see beautiful scenery, the Cassiar Highway is much better.  That goes out of Bellingham, Washington and into the Yukon.  Then you would join the Alaska highway at Watson Lake and follow it  into Tok.  It uses some of the Alaska Highway, but not all.  It is a more narrow road.

If you are going to Alaska, one thing I always recommend is The Milepost.  Updated and published every year, The Milepost is a complete travel guide that gives you all the access routes to the Alaska highway.  It shows you all the gas stations, lodges, and campgrounds, mile by mile.  It’s a must. 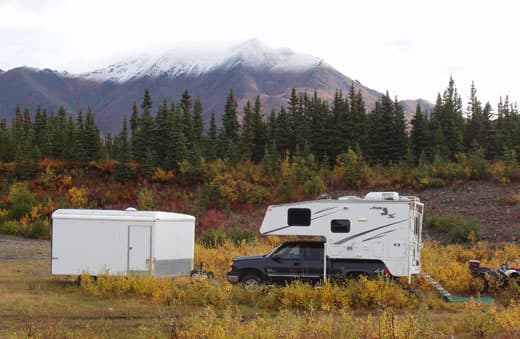 Above: Off the Denali Highway, Alaska

TCM: You’ve made quite a few modifications to your rig.  From looking at your list, it looks like most of the mods are for off-roading.

Henry: In Alaska, the only commercial campgrounds are in the city, so we boondock a lot.  We have two AGM batteries, solar, and a generator.  That’s one of the advantages of our truck camper.  We can go to places that are out of the way, and boondock.  We can stay at trail heads and turnouts off the dirt roads.  That’s not possible with the fifth wheel.

Charlotte: There are so many ATV trails off the Denali highway.  It’s rough, so I wouldn’t want to take a decent motorhome across it.  It’s so scenic.

Henry: While we’re out in our camper and ATVs, we see a lot moose, caribou, bears, and coyotes.  We go to a lake with our inflatable boat where we have a contest; Who can cast out and retrieve the line without having a fish?  That’s because you get a fish every cast where we go. 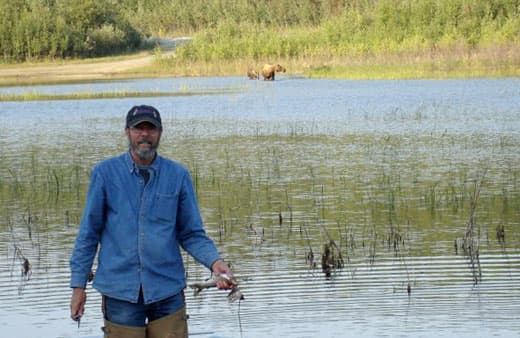 Charlotte: It’s called Bolio Lake, and it’s in Delta Junction, Alaska.  With our truck camper we can camp next to the lake.  It’s off the highway on a gravel road about four to five miles.  It’s wet, narrow and has tight turns, so you wouldn’t want to take anything large.  Really, the only way we can get there is with the truck camper.

TCM: You probably made the day of a few folks who are headed to Alaska this summer, fishing poles in hand.  Any other tips for folks heading to Alaska?

Henry: If you have the time, and you plan to travel in May, go north on the Cassiar because you will see numerous black bears along the highway.  Then take the Alaska Marine Highway south.

Charlotte: The Alaska Marine Highway is a ferry system that travels the whole water length of the Inside Passage and stops at a good number of port towns along the way.  Some of the ports are only accessible by ferry or plane.

With a truck camper the cost is much less than with a larger trailer or motorhome because they charge by the foot.  Just make sure you make reservations well in advance.

Home » Adventure Stories » From Alaska To The Lower Forty-Eight