After over a month on the road, we drove north from the Outer Banks to attend the ninth-annual Mid-Atlantic Truck Camper Rally from Thursday, May 1st through Sunday, May 4th.

This year we actually arrived that Tuesday and enjoyed the brand spanking new shower house and laundry facilities at Tall Pines Harbor Campground.  This is the facility we’ve been waiting to see for at least three or four years, and it’s been worth the wait.  The new building is easily the nicest shower house and laundry building we’ve ever seen; with the possible exception of Disney’s Fort Wilderness.  Nice work Tall Pines!

On Wednesday night, Angela and I took part in a serious BINGO tournament compete with tear-away cards and BINGO markers.  BINGO is the perfect game for a truck camper rally as (a) everyone knows how to play, (b) it’s great for folks of all ages, and (c) it’s social and fun.  I even won a camping chair.

The next morning we welcomed truck camper after truck camper, seeing old friends, and meeting new ones.  Quite a few MATCR regulars were unable to attend due to the late Easter and other schedule conflicts.  They were certainly missed, but we were happy to meet many new attendees, most of whom discovered the rally through Truck Camper Magazine.

Thursday night the rally was buzzing at the spaghetti dinner after which there was a community sugar high from the potluck dessert meet and greet.  As you can tell, we spent our time being social and eating rather than taking pictures.  Hey, it’s our rally too, right? 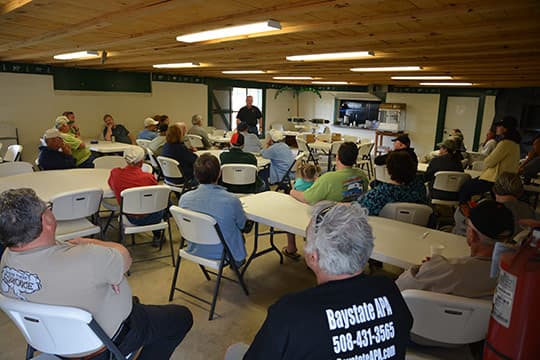 First thing Friday morning, we met Gary Scothern from Happijac Company.  Gary was there to present Happijac Products and answer questions.  We couldn’t have asked for a better representative as Gary has been with the company since it started in a garage with its founder Marty Rasmussen. 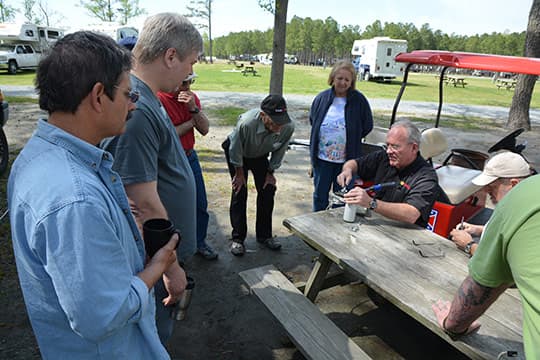 To say Gary knew everything we could throw at him would be an understatement.  He even took apart a few jack gear assemblies from truck campers at the rally and showed us what needed maintenance, and how to address common problems.  Not every company representative will take apart and reassemble their own products in-the-field, with an audience.  Gary made it look easy. 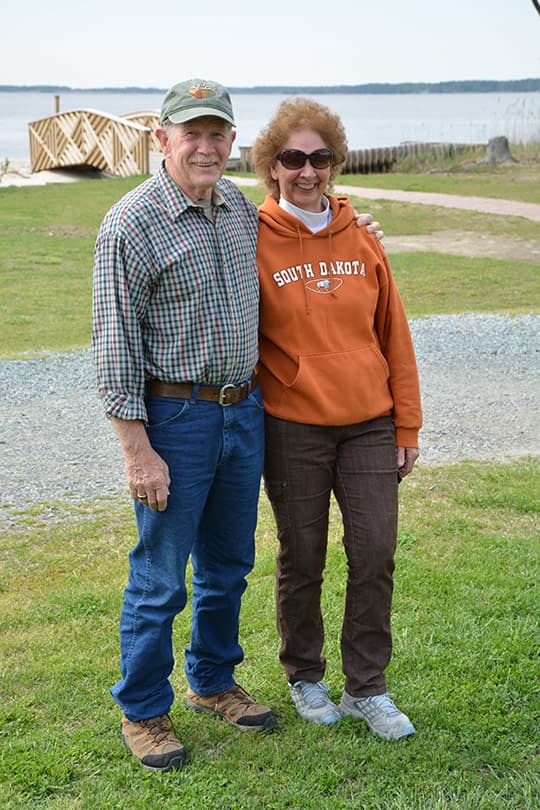 Ed and Connie Spertzel celebrated their 50th wedding anniversary at the rally.  Naturally, Ron took the opportunity to pull them aside before the group shot and tell everyone.  Everyone cheered, and then this happened: 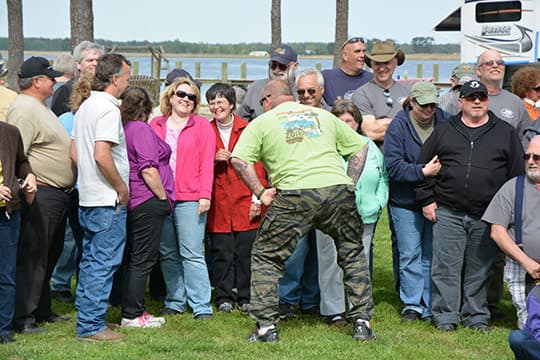 As the saying goes, there’s one knucklehead in every bunch.  For reasons that still escape me, Lee decided to spontaneously show me his better side just before the group shot.  Hopefully now he knows not to mess with the media, especially when they’re holding a camera. 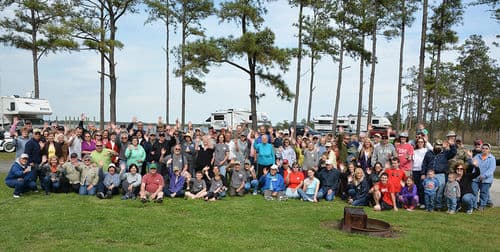 Once again it was my privilege to take the group shot at the Mid-Atlantic Truck Camper Rally.  Click to enlarge the above group shot.

Angela brought our cat, Harley, to the group shot and he was a popular attraction.  Honestly I think we could pass him around the rally and he wouldn’t mind.  That is until Gizmo put his nose right into his face (right photo).  If this picture had been video, you would hear Harley’s ferocious, “back-up buddy” growl. 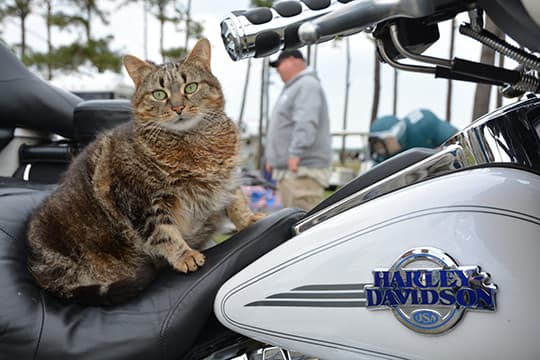 The dog encounter must have really upset Harley as he immediately got on Gary Whistler’s motorcycle and sped off.  Take that Toonces!  My cat drives a motorcycle. 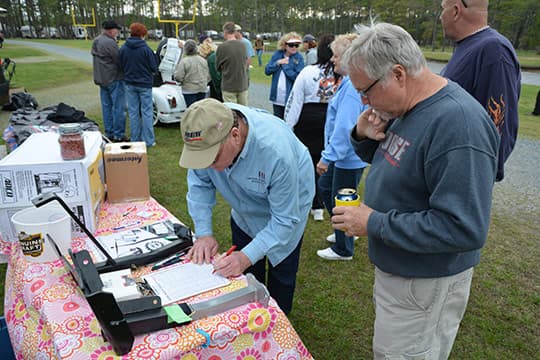 Nearby, everyone was guessing the weight of the new aluminum Torklift Talon tie-down system. 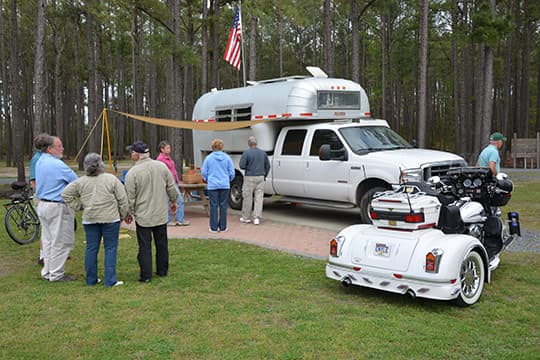 Jane Adams and D. Gorton’s 1967 Avion was a feature attraction all rally long.  This scene was a repeat from the Texas Truck Camper Rally where D and Jane’s Avion also attracted a lot of attention.  If D and Jane wanted a low profile camper, they sure made the wrong choice.  Their Avion is truly beautiful, inside and out. 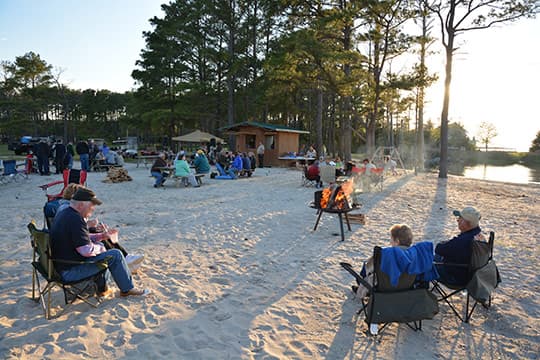 That evening the rally partied on the beach with hot dogs, s’mores, and music. 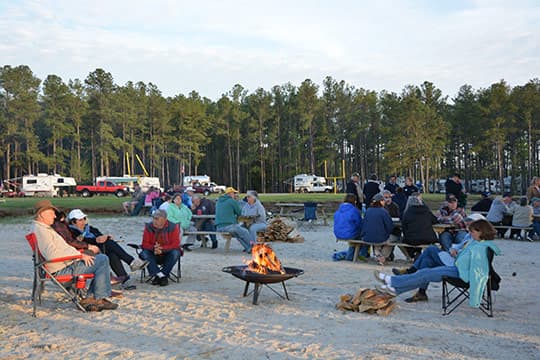 The temperature was a bit on the brisk side as the sun went down, but that’s what the campfires were for.

The conversations about anything and everything went long into the night.  Moments like this are why we hope everyone gets the opportunity to come to a truck camper rally.

Angela and Gary Whistler spent the next morning measuring truck campers for his “Truck Camper Driving Safety 102: For Good Measure” article.  Of course I didn’t realize that meant Angela would be galavanting around on Gary’s motorcycle or I would have put the kibosh on things right then and there.  You think you know a girl…

That afternoon I walked around and took some photographs of truck camper rigs.  It’s always fun to look at the different truck and camper models, rig combinations, and various towed and attached toys and modifications. 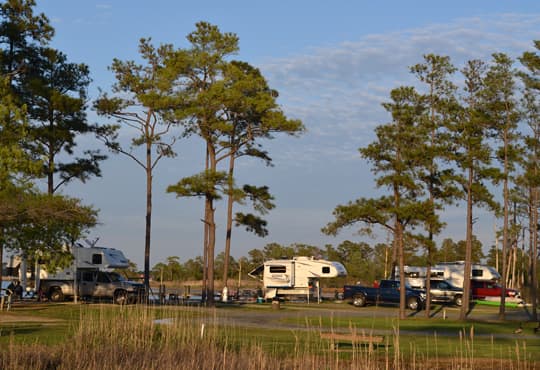 You can see how Tall Pines Harbor Campground got its name.  Here are some campers down by the water. 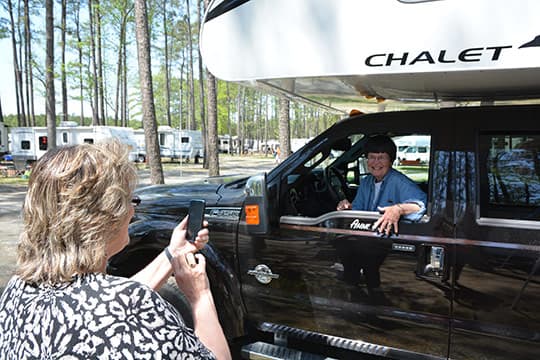 Somewhere along the way I found this scene.  Anne Brown was very excited about the new monogram on her Ford F-450, but she wanted to hide her husband’s name for reasons we never quite grasped.  I think his name is Bob, or Fred, or maybe Elmer.  I’m not sure. 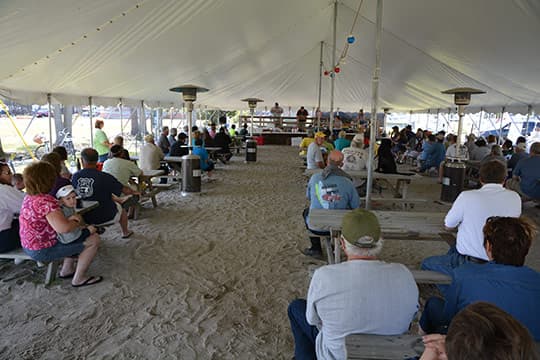 On Saturday night, Ron and Michelle assembled the rally under the big tent to raffle and gave away another amazing pile of prizes. 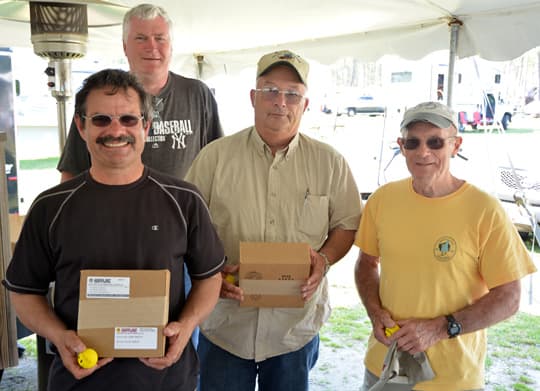 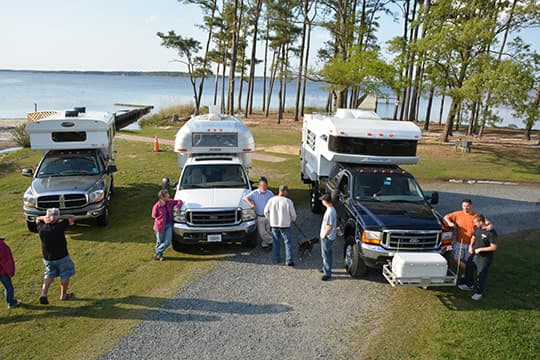 As the sun began to approach the horizon, we gathered the old campers by the water for a picture.  For me, this was the high point, literally and figuratively, of the entire event.  What a lucky view I enjoyed.

If you missed the Question of the Week we did with the results of this photo shoot, check it out here. 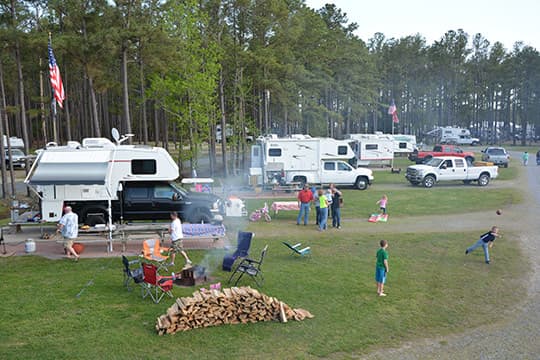 When I turned around on our Northstar 8.5 Arrow, I had another unique vantage point.  This photograph really captures the festive mood at the rally, right down to the mid-air football.

For the second year, John Wells brought his Winchester 98 Signal Cannon.  This reproduction breech loading signal cannon fires 10 gauge blank shells that make a terrific, “Bah-bang!”  Want to get everyone’s attention?  Fire of these suckers off and they’ll all look your way with that, “Holly cannoli!  What was that?” look on their face. 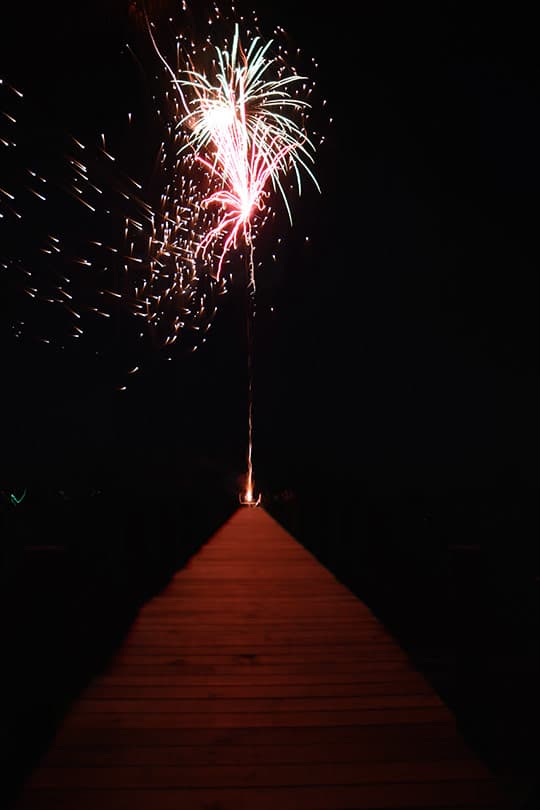 The cannon shots announced the fireworks.  From the end of a new pier, fireworks launched into the early May evening sky.  Not bad for a truck camper rally.

On Sunday morning, the farewell breakfast was packed the Rec Hall to the gills with good friends and great conversations.  We wish we could go back to that breakfast now and then and see everybody in that excited for the truck camping season glow.  We immensely enjoyed seeing everyone and spending a few short days together.

Next year will be the tenth year anniversary.  No other truck camper rally has lasted this long, or been so important to the truck camping community.  Dare I say the multitude of truck camper rallies of today might not exist if it weren’t for Ron and Michelle and their innovations and efforts to build, maintain, and grow the Mid-Atlantic Truck Camper Rally. 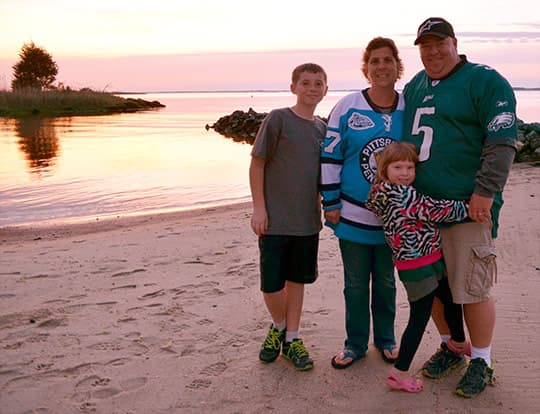 Thank you Ron, Michelle, Jarrett, and Macey!  We’ll see you next year.