Thanks to Lee and Beth Lee, and Mike and Cathie Tassinari, the 2013 Gettysburg North-East Jamboree was, once again, a huge success.  Don’t miss Marcia Cunney’s amazing pictures.

As long as there are folks who are willing to take on the considerable task of planning, organizing, and holding these rallies, there will definitely be a passionate group of truck camper enthusiasts who will attend.  Count us among them.

Imagine inviting about a hundred of your friends to meet at a campground on a Wednesday night and asking each couple to bring a big dessert for the group.  Can you think of a better recipe for gluttony, sugar shock, and indigestion?

There we more cakes, cookies, pies, and other sugary treats on display at Wednesday night’s dessert meet and greet than is probably legal in some Canadian provinces.  After the ferocious feeding frenzy, nearly everyone was complaining about eating way too much.  Why do we do this to ourselves at every truck camper rally?  Two reasons: because we can, and it’s fun.

After the ritual dessert-a-thon, as if the sheer scale of calorie consumption hadn’t already triggered a five-alarm “what the heck are you doing” intestinal alert, there were sticks and marshmallows ready to brown at the campfire ring.  And I worry about overloading trucks and campers. 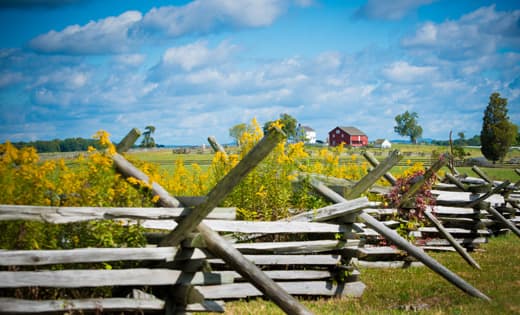 On Thursday, many rally attendees drove into town and visited the Gettysburg National Military Park just a few miles down the road.  Around the campfires that evening, folks shared their feelings about walking the battlefield and exploring the must-see visitors center.  Even if you’re not into history, Gettysburg is a place every one should put on their bucket list.

We had visited Gettysburg National Military Park the previous year and decided to spend our Thursday walking off the previous evening’s nutritional violations and talking with our fellow truck camping friends.  These are the moments we enjoy the most at truck camper rallies, relaxing with folks who not only understand our truck camping addiction, but share it. 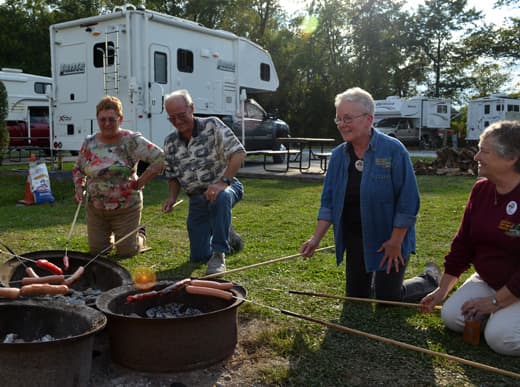 At 5:30pm, the rally wandered over to the community fire ring to borrow a spear from Mike Tassinari and roast a few hundred hot dogs.  If you haven’t stood around a campfire roasting wieners at a truck camper rally, you haven’t lived.  Something about a bunch of adults standing around an open flame burning wieners always brings out the comedy.

Later that evening, author and historian, Chip Jewell, presented to the troops and used divining rods to talk to the spirits.  He really had some of us going until his wife called him on his cell.  I couldn’t quite hear what he said to her, but I imagine it went a little like this, “Can I call you back honey?  I’ve got a dead guy on divine two.”

Friday morning started as all mornings do at a North-East Truck Camping Jamboree, with lots and lots of coffee.  Mike Tassinari, aka the Coffee King of Mass-ah-chu-setts, always fires up a monster coffee urn or two first thing in the morning.  So that’s where he gets all that energy.

At 9:00am we sat in on Mike’s Disney Trip Presentation.  For those of you who don’t already know, Mike is leading a truck camper rally in Disney World’s Fort Wilderness Campground this coming January, 2014.  After listening to Mike rave about Disney World and Ford Wilderness for the past five or so years, we are giving it a go.  There are still spaces open for the Disney Trip, but you need to contact Mike as soon as possible to make arrangements.

Running over from his Disney Presentation, Mike was now the presenter for the Solar Panel Seminar.  Okay, it wasn’t a very long run for Mike, but is was impressive to see him go from Mickey and Goofy to amp hours and panel wattage.  Talk about talent.

Above: Batteries, solar panels, and even solar ovens were talked about at the seminar

Attendance at the Solar Panel Seminar was astounding.  It seems that everyone and their uncle is interested in solar panels and solar panel systems.  Based on this attendance and the questions raised, we clearly need to do more in Truck Camper Magazine on solar panels, batteries, and LED lighting.

We didn’t attend the bus trip to Frederick County, Maryland for the Fire Museum and Fallen Firefighter Memorial.  Lucky for us, Marcia Cunney and her husband John went on the trip and took photographs.  Thank you Marcia and John.

As a long time metal detecting enthusiast, I was particularly keen on Jim Deater’s metal detector seminar.  Jim presented modern metal detectors to the rally and let attendees try out the detectors in the campground’s sand volleyball court.  Speaking from experience, there’s nothing like digging up buried treasure. 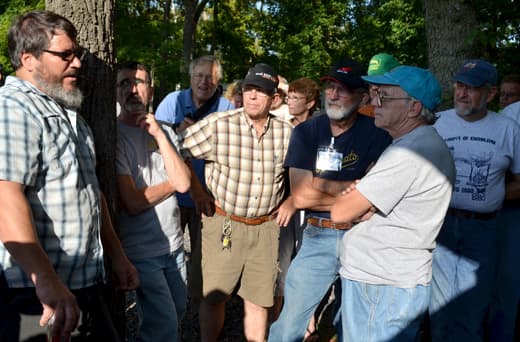 Following the metal detector seminar, Mike Olesnevich of Xtreme Campers gave a talk at his campsite on truck modifications.  Depending on your truck, camper, and needs, he recommends 19.5 wheels and tires, a quality sway bar, and Torklift StableLoads.  He also showed us a number of special modifications he’s done to his rig including a HDTV that swings down from the underside of his slide out.  Very slick. 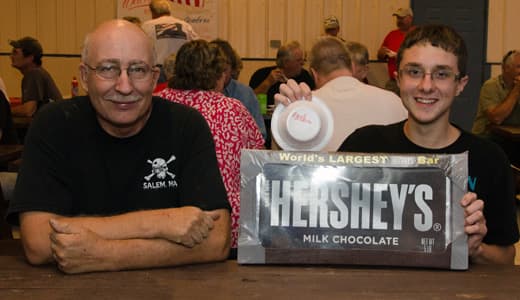 The 7:00pm ice cream social had both ice cream and lots of socializing.  No false advertising here.  For those so inclined there was plenty of whipped cream, chocolate sauce, and sprinkles too.

At 8:00pm the rally returned to the community fire ring for Civil War stories and songs with Matt Dodd.

There was plenty of truck camper gear, accessories, and parts at Saturday morning’s Tag Sale.  Unfortunately, no one brought LP records or tube stereo equipment leaving me very disappointed. 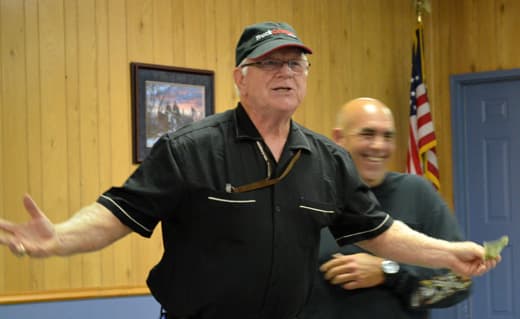 At 1:00pm, Angela attended Gary Whistler’s truck driving seminar and came back so excited about Gary’s presentation that she decided to make it a future story in Truck Camper Magazine.  Gary was the Certified Director of Safety for his company.

Perhaps never in the storied history of truck camper rallies has there been an event as popular, and down right hysterical, as the dog maze competition.  The entire rally and eighteen dogs gathered around Mike Tassinari’s intricate maze, all buzzing, and occasionally barking, in excitement and anticipation.  Why Don Kingfield was barking we’ll never know. 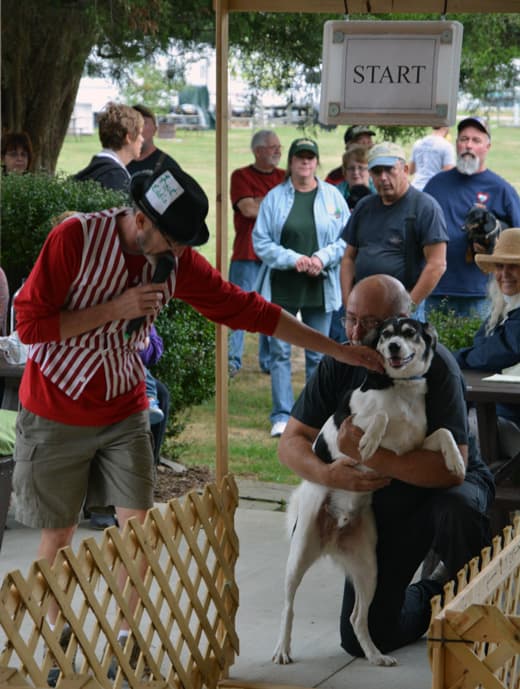 Above: The first place winner of the dog maze

Before each run, Mike would hold the pooch in pursuit like a human gate.  Then he would call out, “Time Keep-ahhh. Stahhht!”  At that blistering moment, Mike would release the dog and Cathie would punch her timer.

What followed was a little bit of everything.  Some dogs raced through the maze as if they were born to run.  Some dogs stood at the starting gate staring at their owners as if to ask, “What the heck is this all about?” 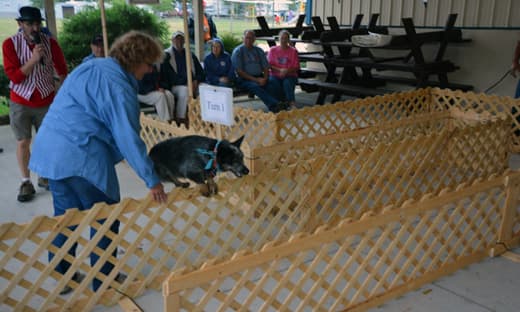 A few ran out, few jumped out, and a few stopped by to chat with Angela in the Truck Camper Magazine press box.

The real show is watching the dog owners frantically attempting to communicate with their four legged friends.  Most teased, presented, and tossed treats to entice the slightly furrier family members through the lattice before us. 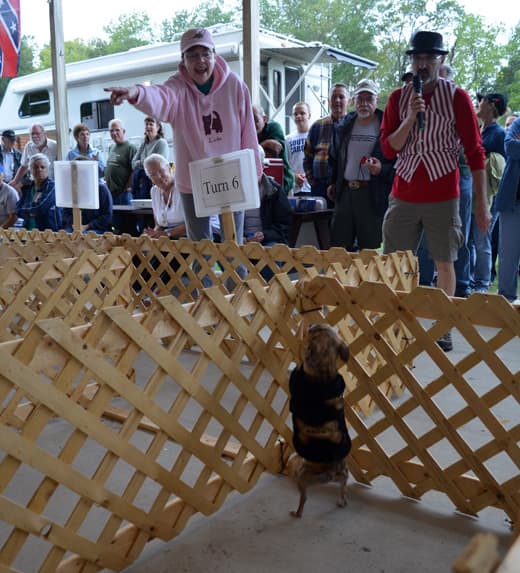 Others dangled leashes, tossed dog toys, gestured wildly, and repeatedly called out in a desperate attempt to convince man’s best friend to victory, or at least completion for goodness sake.

Towards the end of Saturday, word broke that the rally would indeed be returning to Gettysburg Campground next year.  There had been chatter about taking the popular September rally to Hershey, but the informal consensus was clearly in favor of returning to Gettysburg.  When the news went out, there was much rejoicing.

Above: Click to enlarge the group photo, photo courtesy of Marcia Cunney

At 5:15pm something happened that has not happened at any truck camper rally before it; Angela and I were both in the group shot.  Marcia Cunney and her husband John were eager to take over photo duties and I was more than happy to relinquish.  I also enjoyed watching someone else attempt to herd the cats together.  Thank you Marcia.  You can herd these cats anytime.

We got into line a bit late for the potluck dinner this year and found the first two or three tables of food had been devoured by hungry folks before us.  Fortunately, the last few tables were still brimming full of delicious food and we would not go hungry.

Above left to right: The first, second, and third place winners of the sign contest

Above: The 50/50 drawing and raffle brought quite a crowd

The 50/50 drawing was at 7:00pm followed by the raffle table drawings.  For the second year in a row, Angela won the honey and beer basket.  How sweet, hic!

Xtreme Campers sponsored another delicious breakfast on Sunday morning.  By sunrise the rally crew had the grills cooking up eggs, sausage, bacon, and pancakes.  If that wasn’t enough, they had toasted english muffins, coffee, and orange juice.

We’re talking a serious breakfast here folks, the kind you look forward too, devour, and then rub your tummy afterwards.  Thank you Xtreme Campers! 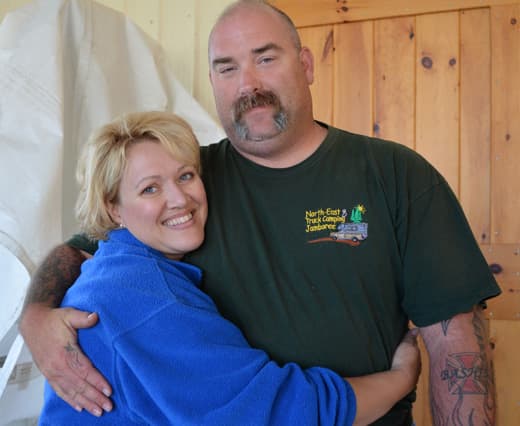 Above: Wagonmasters Lee and Beth Lee

We want to thank Wagonmasters Lee and Beth Lee for making the Gettysburg North-East Jamboree a big success.  We particularly appreciate your positive spirit and determination to see that everyone was having fun.  Thanks to you guys, we most certainly did.  Thank you!

We also want to thank Mike and Cathie Tassinari for their seemingly tireless efforts with both the Gettysburg Jamboree, and the North-East Jamboree.  We are beginning to believe Mike is not entirely human in his ability to host back-to-back presentations, pack a trailer like Tetris meets Rubics Cube, and generally do whatever it takes to keep this group going strong.  Cathie is right there with him, and has to put with Mike, so that’s at least as impressive.  Thank you Tassinaris.  Human or not, we really appreciate everything you guys do. 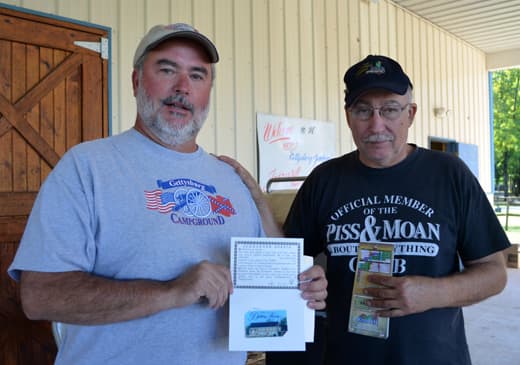 Above: Robert Adams, truck camper owner, and owner of the Gettysburg Campground receiving a gift for his help with the Jamboree

Angela, Harley, and I had a wonderful time at the 2013 Gettysburg North-East Jamboree and can’t wait to see you again in Gettysburg next year. 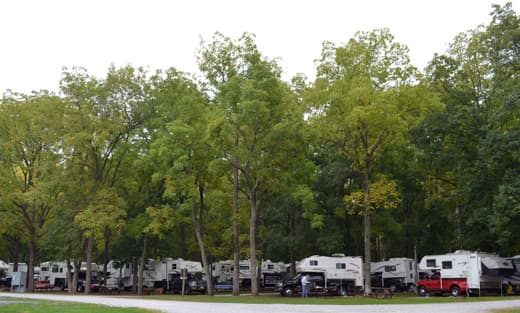 Thank you, Marcia Cunney, for submitting photos from the rally.

For more information on how to run a rally yourself, read Mike’s great article called, “How to Run A Truck Camper Rally”.  To share rallies you are holding in 2014 or to catch up on future rallies, visit our Shows and Rallies page.