It’s time to reveal which winning photographs went with what months, and who made the cover.  Oh the suspense!  Drum roll please… 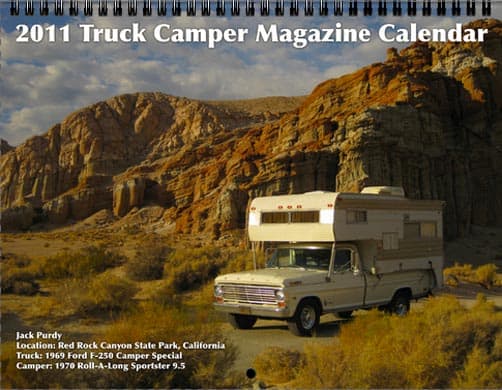 “Red Rock Canyon State Park is an area with unusual rock formations and colorful canyon cliffs.  My wife and I were looking for a good place to camp.  It was late afternoon and we had stopped in this spot.  The sun was bringing out the beautiful colors of the canyon wall, making a perfect picture.  Thank you to everyone who voted for my picture.” – Jack Purdy 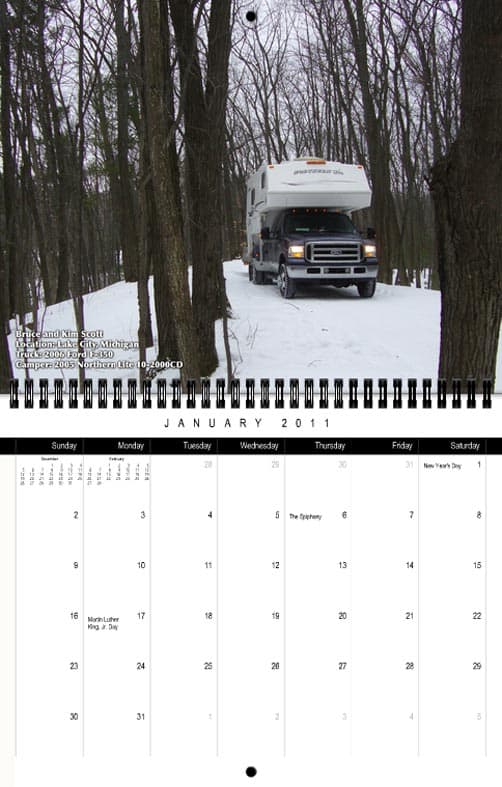 “This photo was taken in February of this year.  Kim and I were on our way to find some snow for snowmobiling in the upper part of the lower peninsula of Michigan.  We don’t always know where we are going to stay so we just look for a nice place to park for the weekend.  This photo is on a small hogback with a two-track trail; we didn’t stay here but it was fun to explore.” – Bruce Scott 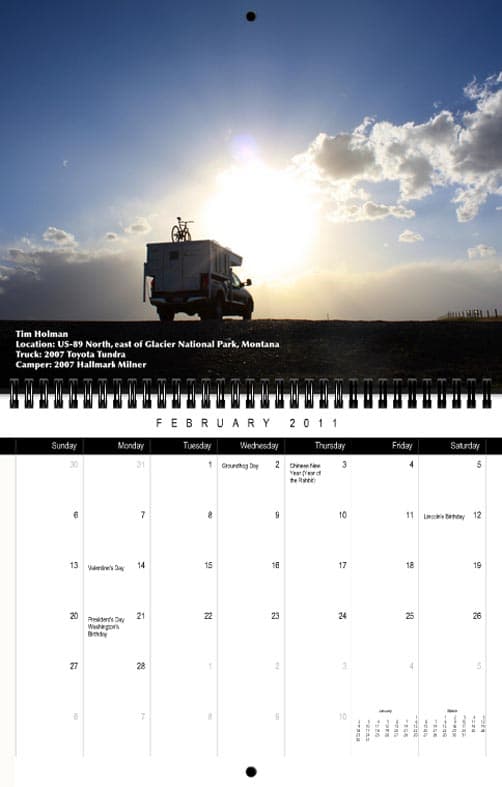 “This photo was taken on day three of my 1,800 mile solo trip to Glacier National Park.  With less than 100 miles to Glacier I came upon this spectacular view of the sun setting into the storm clouds and mountains of East Glacier.  The photo does not do justice to the thirty-five to forty mile per hour winds I had been fighting all day!  The wind was howling so loudly through the bike and roof rack I had to double check the parking brake before fighting the wind to get out the door.  I took a few minutes to shoot photos and enjoy the view.  Later I would be in that dark storm searching for a place to stop for the night.  It was just the beginning of my two-week adventure to see Glacier, Yellowstone, and catch up with friends in Kalispell, Montana and Aurora, Colorado.” – Tim Holman 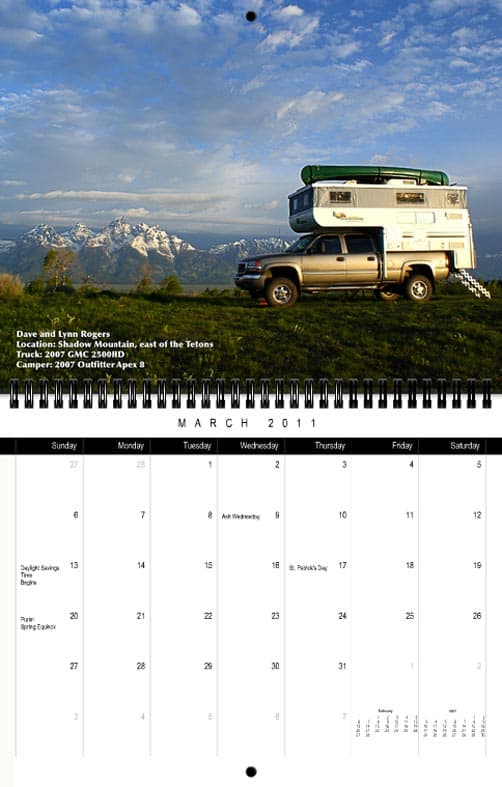 “Lynn and I where camped on Shadow Mountain east of the Grand Tetons.  We had just weathered a fantastic storm and now had more awesome views enhanced by the clouds.  This was our second time to camp here; the first was three years ago.  I found out about Shadow Mountain on a photography website while looking for places to take pictures of the Tetons.” – Dave Rogers 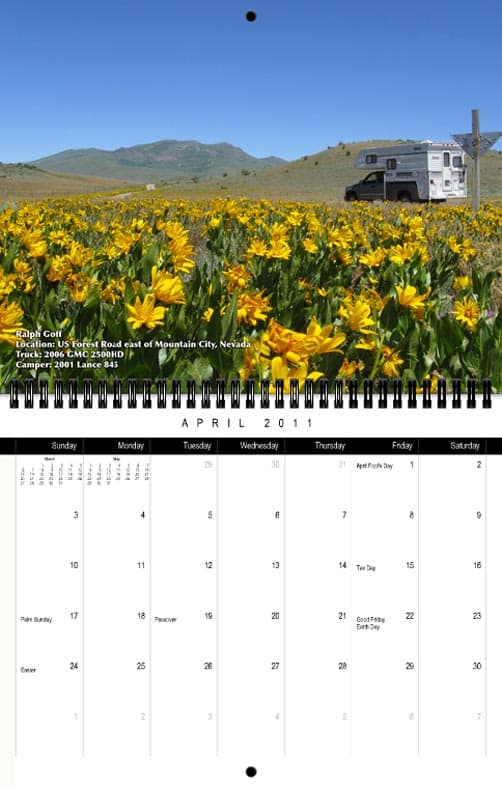 “I took this photo on July 5, 2010 during my annual trip from California to Montana and back.  The trip takes about three months and is part of the six months of solo living and traveling in my truck camper.  I was taking a lonely Forest Service dirt road about eighty miles north of Elko, Nevada to a new campground.  The beautiful yellow flowers were quite common in the area (and other nearby states I found later).  I’m a sucker for pretty flowers, so I couldn’t pass up the shot.  I definitely took it thinking it could be a winner.  It was!

As a side note, within thirty minutes after taking this photo I got terribly stuck in some deep dried-mud ruts of that otherwise fine lonely dirt road.  Someone finally came along in a 4X4 truck and pulled me out.  Needless to say, I was very relieved, since there was no cell phone service there.  So the day included a contest winning photo taken, followed by the worst RVing predicament I’ve been in during my five years of ramblin’.  You can read more about it on my RVing website, www.RamblinRalph.com.  Select the “Sporadic Blog” link.” – Ralph Goff 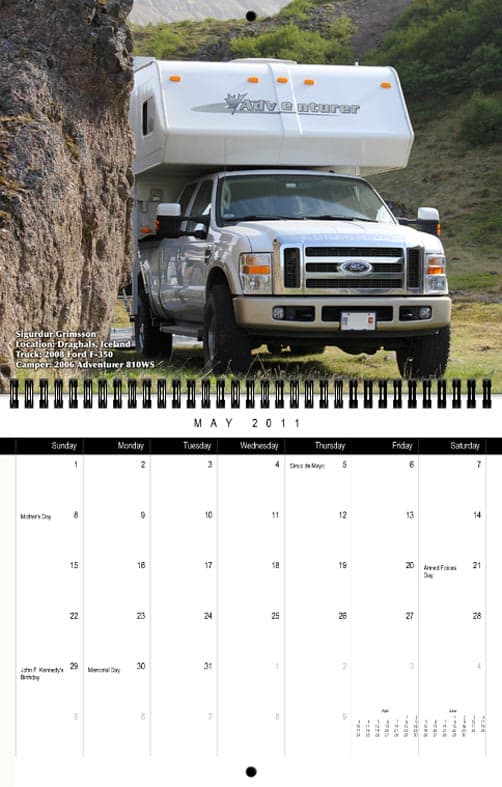 “This picture was taken in early June 2010.  We were traveling with friends who had camped at this spot some thirty years ago and we were eager to repeat the experience.  In order to get to this spot one has to have a four by four and very low range gearing.  After owning almost every type of towable we were finally enjoying the freedom of truck camping and being able to get to remote places as we used to when we were a bit younger.  This was boondocking at its best – no one around and crystal clear, Kalda (Cold river) some twenty feet away.  After a BBQ and bedtime stories we went to bed while the river hurried to a nearby lake, which easily put us to sleep with its soft pouring sound.” – Sigurdur Grimsson 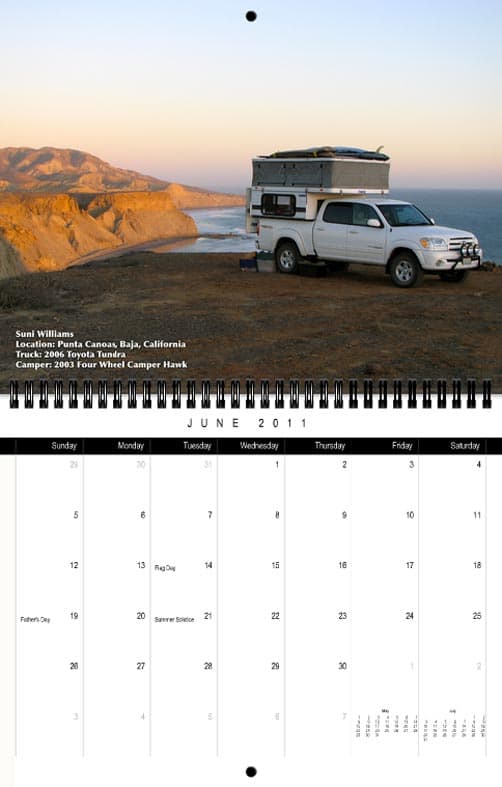 “This shot was taken on a week long solo surf trip in the remote region of Baja’s central Pacific coast.  As I recall it was at the end of the long first day after about twelve hours behind the wheel.  I arrived to find mediocure surf but a fantastic sunset with a view a view to the south where my journey would later take me.  This part of the coast stretches for approximately 150 miles via a maze of remote dirt roads and silt beds.  There are no towns, no gas, and no services.  You are on your own out here.  I saw two vehicles in seven days.  A trip to this area is always an adventure.” – Suni Williams 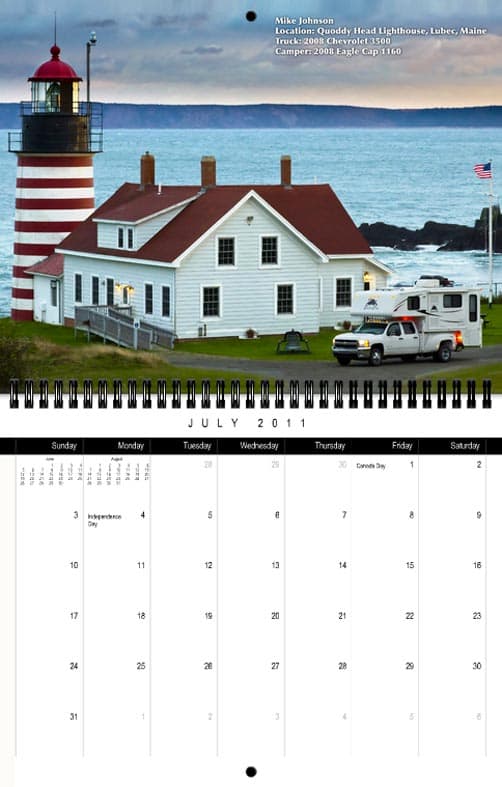 “My wife, Lisa, and I were on a two-week trip to the northeast when we went to Quoddy Head light in Maine.  Neither of us had spent any vacation time in the northeast so we headed up the coastline from North Carolina with a destination of however far north we could make it and return home while seeing the fall leaves on the way back.  We asked people along the way what we should see and if we heard the same thing twice we went there.  The coastline of the eastern seaboard is really awesome.  Quoddy Head Light is the easternmost point in the United States so it was a must see, however you don’t get there by accident!  We ended up driving six hours total to get to the light and back.  As we arrived the sunlight was fading and had only minutes to take photos of the lighthouse and truck camper.  The day had been rainy, but the sun was coming out and as it went down so we had good conditions for the photo.  After the sun disappeared over the horizon we headed to Lubec, Maine, the easternmost city in the United States, for lobster.  What a great ending to a perfect day.” – Mike Johnson 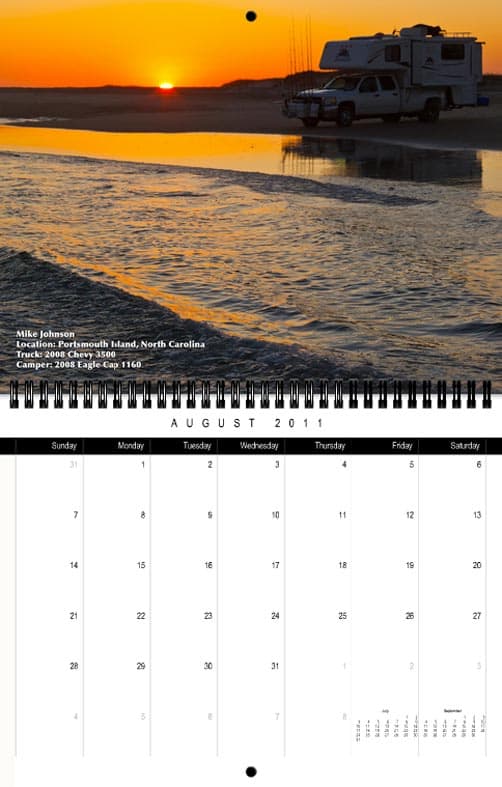 “Portsmouth Island is a special place steeped in the history of North Carolina.  The now abandoned village once served as part of the shipping lanes for North Carolina.  Seagoing vessels couldn’t navigate the shallow waters of the Pamlico Sound so their cargo was offloaded to smaller ships for the trip across the sound.  Portsmouth Island served as the port for that transfer.  Now, Portsmouth is a haven for fisherman, hunters, birders, and those wanting to spend time on a deserted beach with the only inhabitants of the island, large mosquitoes.  My dad and I were looking for the right spot to fish this afternoon when the golden light of sunset started to appear.  Remembering the Truck Camper Magazine photo contest I headed out in search of a winning photo.  Luckily conditions aligned and the shot made the calendar!” – Mike Johnson 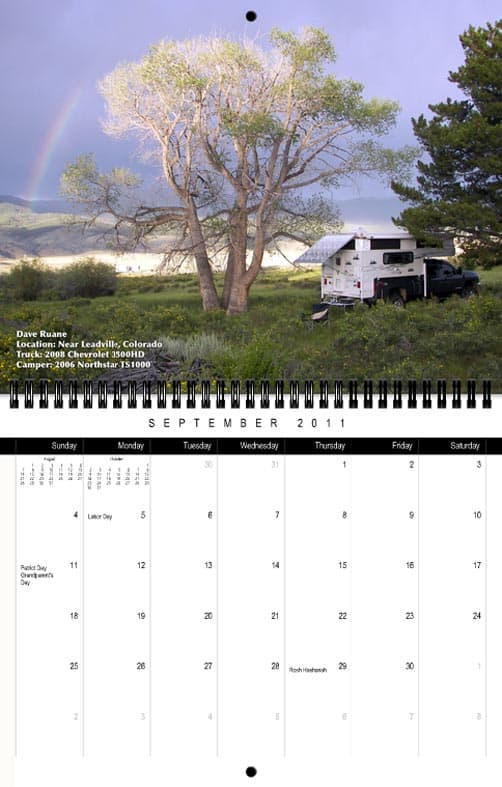 “The annual Colorado Bowhunters Association Jamboree attracts over 200 people every year and it is a great place to camp and shoot targets.  I was able to find a place away from the masses and this late morning shower made for a great picture of my camp.  The yellow lab named Cooper that accompanied me wasn’t all that impressed with the rainbow but enjoyed the cooler temperatures on this hot July day.  I made seafood shish-kabobs that evening and enjoyed great conversation.” – Dave Ruane 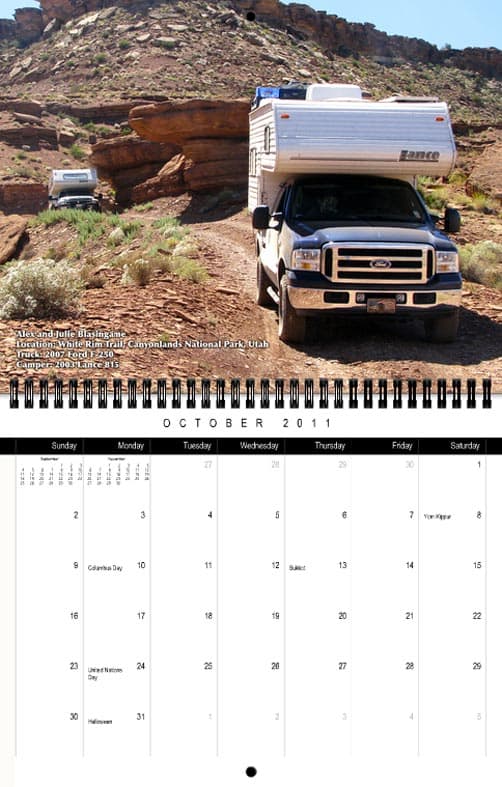 “This photo was taken on the backside of Murphy’s campsite on the White Rim Trail in Canyonlands National Park, Utah.  This was the second expedition on this rugged trail.  Murphy’s Hog Back poses a huge challenge for truck campers.

Jeff Reynolds joined us for this adventure.  This was his second time, first time was twenty plus years ago, on the White Rim Trail as well.  Murphy’s Hog Backs is a steep trail that has up to a 30% grade and at its summit is a campsite of the same name.  We were headed to campsite named Candlestick, some ten miles from Murphy’s Hog Back.  White Rim Trail was closed at Upheaval Wash due to the August 19th storm.  My wife, Julie, enjoys going on adventures like this and with the vast off-road experience that Jeff Reynolds brought, it made for a much more enjoyable trip.  I do my picture posting on Travelingman2, travelingman2.smugmug.com< and post trip reports at RV.net in the Truck Camper Forum." – Alex Blasingame 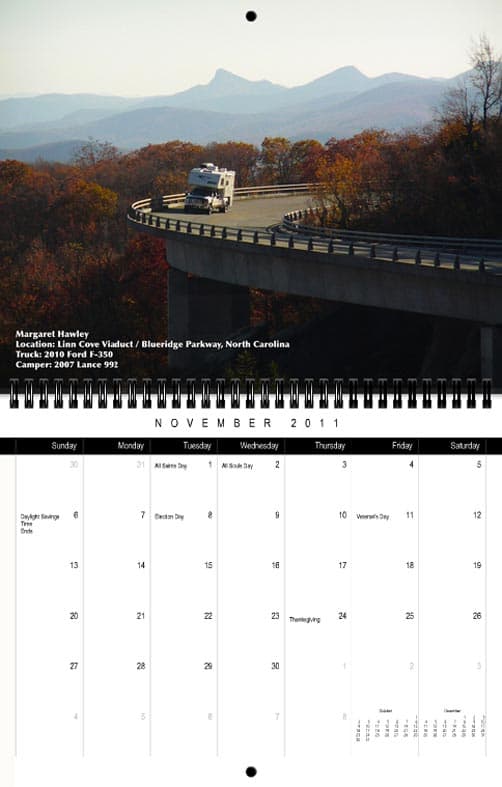 “As the fall leaves were very colorful this year, my husband, our son, Austin, and I headed out to stay with some friends in Asheville, North Carolina.  We headed East on the Blue Ridge Parkway to Mount Mitchell, and then on to the Lynn Cove Viaduct.  We couldn’t get over how beautiful all the foliage colors, the mountains, and the viaduct were.  We knew we needed a picture of this with our camper coming around the viaduct.  With our son, Austin, perched high on a rock above, he snapped several pictures; this one obviously being the best.  We were grateful to get the shot with no cars; the parkway was very busy with leaf lookers.  Amazing!  We were reluctant at first about putting this picture in the contest, (Can you believe that?).  I was the one, who pushed for it to be put in.

Thank you so much, to everyone who voted for us.  It was unexpected.  I also want to thank Gordon and Angela for their work and the great job that they do with Truck Camper Magazine.” – Margaret Hawley 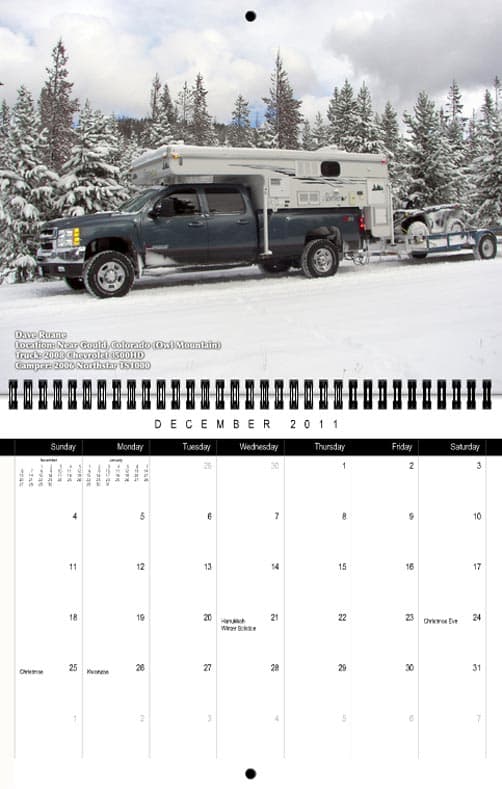 “An early October snowstorm caught me by surprise while camping alone up by Owl Mountain in Jackson County, Colorado.  There was no snow in sight on the way up, but eight-inches fell overnight.  I wasn’t sure if I was going to make it out since the roads weren’t traveled yet and I was deep in.  The only casualty was a slightly frozen water line inside the Northstar and some white knuckles!  Note to self – bring a bigger shovel in October!” – Dave Ruane