Canadian Load Divider Dollies presents the WDT909, a smart trailer axle designed to “Turn Your Half-Ton Into A Super Duty”. That’s quite the claim, but this appears to be quite the would-be product. 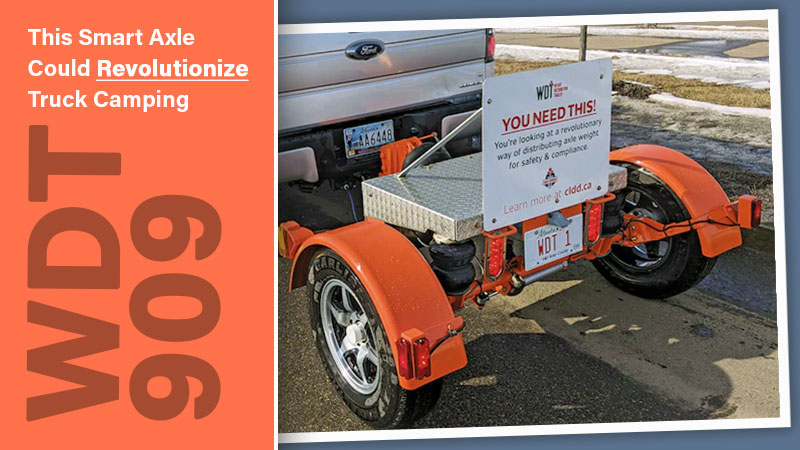 In February of 2008, we interviewed Bob Cremer, a fellow truck camper and inventor who created a tag axle product to distribute the load of his Bigfoot 3000-series. Bob’s “Stinger Hitch Helper” slid into the receiver hitch of a pickup truck and had two wheels that moved up and down on a vertical stem to adjust their position. This set-up was done prior to loading a truck camper. Once a camper was loaded, the Stinger Hitch Helper was designed to improve the steering, braking, and control.

Stinger Hitch Helper received a very positive response from Truck Camper Magazine readers but later succumbed to the Great Recession. In the years that followed, I must have talked to half-dozen companies who were considering a similar solution, but none of them seemed to have the required entrepreneurial drive, engineering chops or funding.

Fast forward 14-years and I get an email from long-time reader, Charlie Coushaine. He had recently ordered a monster Class 5 truck and then stumbled upon a product that gave him pause. The product was the WDT909 Trailer by Canadian Load Divider Dollies, Inc.  The headline on the company’s website stated, “Turn Your Half-Ton Into A Super Duty!”

Above: Click the video to see how the WDT909 system works

What first appears to be another passive tandem or tag axle is actually an active system employing three air bags and an onboard air compressor. The result is a smart axle that balances to a vehicle automatically and makes necessary pivots and adjustments to compensate for differences in axle elevations.

According to the manufacturer, the product adds 1,500-pounds of “legal” carrying capacity. This could be a sticking point as increasing the legal GVWR, GAWR, or payload capacity of a given truck is universally deemed to be impossible.

At first blush, this is exactly the kind of better mousetrap that could make an impact on the truck camper marketplace. That is if it proves to work as intended and successfully makes it to the marketplace. According to the company website, the product awaits sufficient orders and is priced between $5,000 and $7,000 each (roughly $3,862 to $5,400 USD).

For more detail, have a look at the video and check out the company’s website. For now, it seems the product is not available, but that could change if they hear from enough truck camper owners. Is this something you would be interested in? Be sure to let them know.

Thank you to TCM reader, Charlie Coushaine, for bringing this video to our attention.