After getting his first Hallmark camper, Matthew Bernier decided to take on a quick winter crossing of Engineer Pass.  Two days later, he emerged on the other side.

Reading Matthew Bernier’s interview, you can almost hear his mind at work.

“Why not buy multiple ski passes and spend seventy days a year at Vail?”

“Why not cross Colorado’s infamously challenging Engineer Pass in the winter?”

“Why not take your wife, two kids, and two dogs camping in a pop-up truck camper?”

We get the feeling that there’s been a lot of, “Why not” moments in Matthew’s life.  This is a guy who likes to think big, and make things happen.  Maybe we all need to think a little more like Matthew and ask, “Why not” when things get in the way of our dreams. 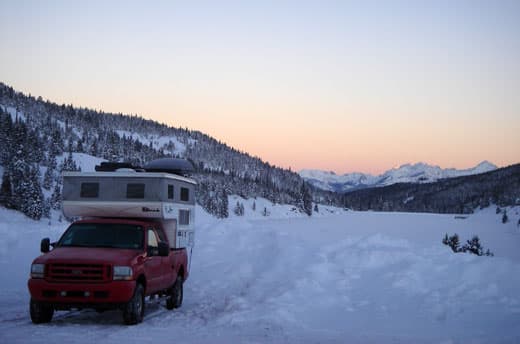 Above: Matthew and Jennifer’s Hallmark Milner at Vail Pass

Matthew: When I first moved to Colorado I skied seventy days a year.  I wanted to live in the mountains, but couldn’t afford a place there.  That’s when I started looking at truck campers and bought my first Hallmark.

Many of the winter photographs I sent you are from Vail Pass.  My friends liked to say my second address was, “1 Vail Pass”.  It’s true.  I had a house at the highest elevation in Vail, my truck camper!  Lucky for me, Vail Pass allows overnight parking.

A season pass costs between $300 and $400 per year.  I would buy a season pass to Vail, Copper, and Winter Park and stay on Vail Pass.  There’s a cell tower nearby which allowed me to check my snow and ski reports on my computer and cell phone.  It was perfect.

TCM: How did you decide on a Hallmark for winter camping?

Matthew: Friends of mine had a Hallmark already and lived up in Aspen.  When I saw their Hallmark rig and truck camping lifestyle, I realized that was definitely what I wanted to do.

Even though it’s a pop-up, my camper is very well insulated.  I’ve been in temperatures as low as twenty and thirty below.  I would be in a T-shirt and shorts inside the camper.

TCM: We camped in temperatures near freezing in a Hallmark and found we were plenty warm.  Of course we burned some propane, but that experience showed us that a pop-up camper can be used in cold temperatures.  You’ve now had two Hallmarks.  Tell us about your first one.

Matthew: In 2004, I got my first Hallmark.  At the time, I had to borrow money to buy that camper.  They are more expensive than some other pop-up truck campers, but the quality is insane and the customer service is even better.  I’ve never purchased anything where the customer service has been this good.  I also like the fact that they are built in Colorado by a family run business.

TCM: Tell us about your first trip with your Hallmark.

Matthew: One of my first trips was to Engineer Pass and Cinnamon Pass in the spring.  I remember driving the Alpine Loop over the mountain and dropping into Lake City.  I had no idea what I had gotten myself into.  The road was no wider than the rig and the turning radius of my truck was horrible.  When I reached the switchbacks on the pass everything was on the floor.  It took me ten hours to go fifteen miles.

Matthew: It was.  When I reached the top of Engineer Pass, I freaked out.  Then I continued on the southeast facing side of the pass.  There were massive snow walls on the pass and deep mud.  At that point I was committed and literally could not turn around.  There were sections of road with 1,000 foot drop offs.  More than once I thought about what an idiot I was. 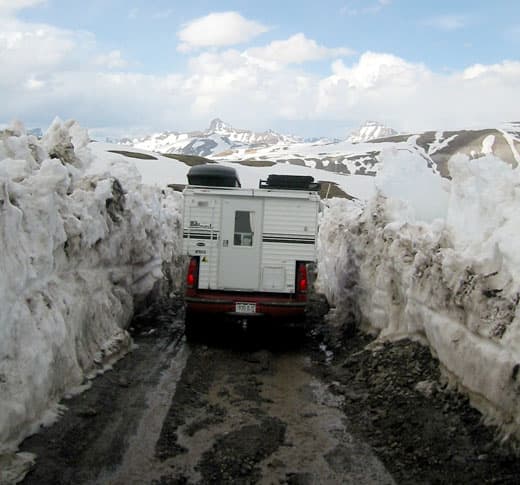 Above: East side of Engineer Pass

Eventually I reached Lake City.  The people there looked at me and shook their heads.  It took me two days to get over Engineer Pass.

That night I found a place to camp next to a sign that reads, “Henry David Thoreau’s Cabin”.  Five hundred feet down there was a big flat grass area.  If you look in our first anniversary picture, that’s where we camped.  We go back there every Memorial day and Labor day.

TCM: That’s quite a story.  How did your wife and you get started camping together?

Matthew: The first time my wife came out camping with me we went over that same pass I just told you about.  She said, “What are you doing?  This isn’t even a car road.  What are you doing?”  Now it’s an annual thing every Labor day.  A lot of times for Memorial day all the campgrounds are still snowed in.  That’s when we started going to Lake McConaughy in the Spring where there’s no snow. 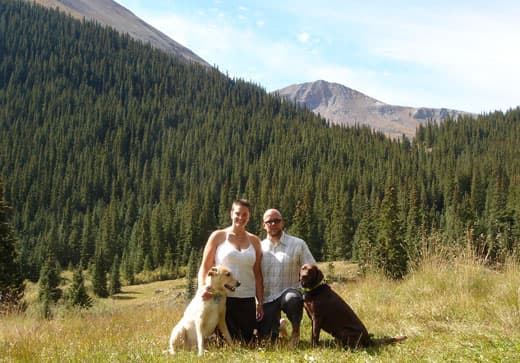 Above: Matthew and Jennifer’s wedding in Ouray, Colorado

TCM: How did you use your Hallmark for your wedding and honeymoon?

Matthew: Let me back up a little.  The August before we got married we went on a motorcycle trip with my brother.  My brother and I rode our motorcycles and she followed us in the truck camper rig.  Whenever we stopped, I’d say, “Let’s get married here” and she’d say, “No, I’m not getting married again”.

The week before Memorial weekend in 2006, I said to her, “We’re going to southern Colorado and we’re getting married this weekend”.  She said, “Okay”.

Immediately I had the ring made.  Then I found out that you don’t need an official to marry you in Colorado.  You can marry yourselves.  So we went to Southern Colorado for the weekend to get married.  The day before we left we went to the courthouse.  You sign some papers, and then turn them in within seven days of getting married.

Our ceremony was sitting by the campfire in Ouray, Colorado with the dogs.  We said what we needed to say, and we were married.  We put the dog’s names down as witnesses.

The next day we turned in the paperwork.  Then we drove over the pass and went back to the flat grass area at Beaver Pond.  That’s where we had our honeymoon for seven days.

TCM: That’s too funny that the dogs were the witnesses!  Love it.  When did you get your second Hallmark?

Matthew: We bought our new Hallmark in 2008.  We wanted the electric lift mechanism and the one-piece carbon fiber reinforced fiberglass roof. 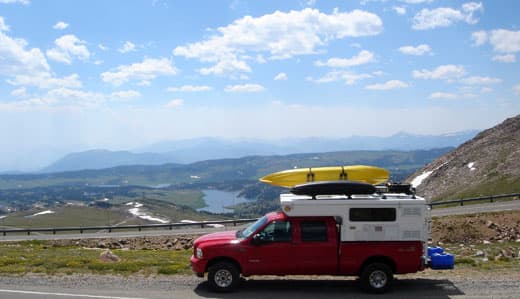 Above: The new Milner with the electric lift mechanism

At the time we were going out to Flaming Gorge, Utah quite a bit and keeping our canoe, kayak, and chairs on the roof.  That worked great, but we had to take everything off the roof if we wanted to lift the roof and use the camper.  An electric roof works even with the canoe, kayak, and chairs loaded.  Hallmark had also done a number of things to make their new campers look more modern and convenient. 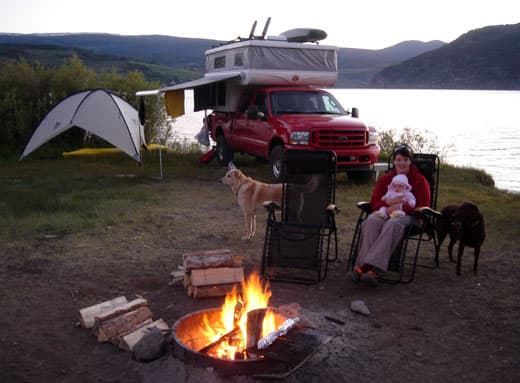 TCM: It looks like your kids have grown up truck camping.  Was it a challenge taking your kids camping as infants?

Matthew: You just adapt.  When we had kids, we were not going to change what we enjoy doing.  I see so many people who have kids and then don’t do anything.  Not us.

Our daughter was camping at 11,000 feet when she was six months old.  Of course we tested her first before taking her to those altitudes.  She was born at 5000 feet, but altitudes can be an issue with young children.  Honestly, without the truck camper we would not have been able to do it. 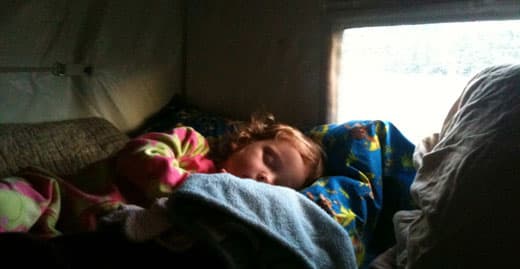 Above: Nap time in the camper

When our son was born, it was a little more challenging.  When one wakes up, it wakes the other up and you’re screwed.  We didn’t camp a lot when our son was really, really young.

I teach sport’s performance rehab techniques.  Monday is my day off.  If I don’t work on the weekend, I can get Friday through Monday off. 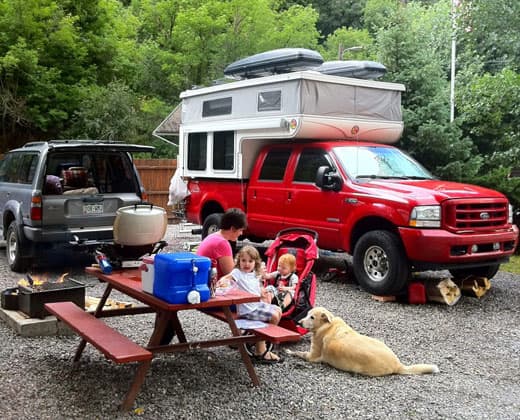 Above: Camping in Ouray, Colorado at the 4J+J+J+J Campground

When the kids see me packing up they get so excited.  They love camping.  We take them on four wheel drive roads and they love it.  They’ll even fall asleep.  My wife wasn’t sure about it at first, but the kids were out cold in ten minutes.  I think you get used to what you do on a regular basis.

Everything is always in the camper, ready to go.  My camper is in the backyard and it’s always set up as a guest room.  Our guests will say, “We’ll stay in the camper”.  I have a summer set up and a winter set up.  I have two storage containers I keep everything in.  We even keep the refrigerator on and stocked.  It’s only a little of packing when we go from winter to summer stuff.

I couldn’t imagine not having a camper.  It’s awesome! 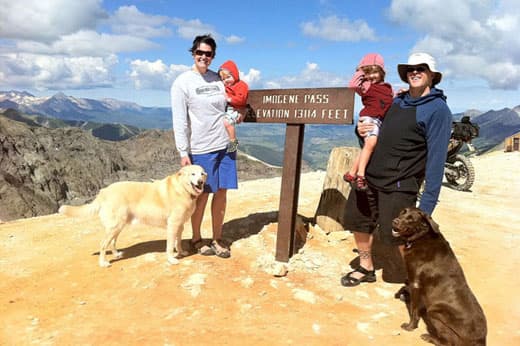 Above: Jennifer, Ryker, Rawlings on the left Rhys, Matthew, and Brenly on the right